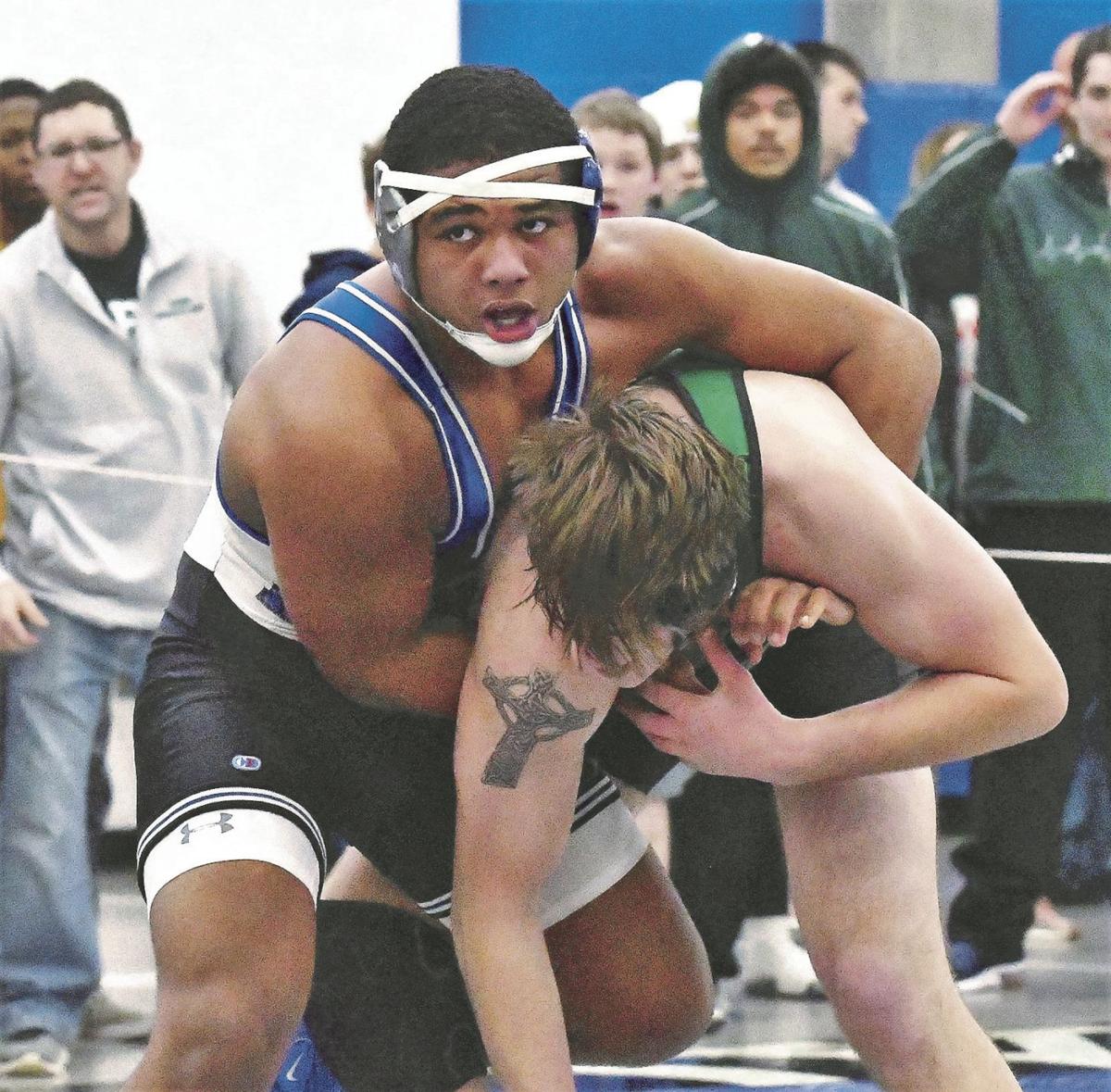 Hopkins junior RJ Chakolis, top, secured the 195-pound title at the Paul Bengston Invite on Saturday. He defeated Park of Cottage Grove’s Khrystian Mullen 7-5 in overtime to improve to 9-2 on the season.

Hopkins senior Demetrius Patton, top, controls BOLD’s Anthony Maher during the 195-pound final at the Paul Bengston Invite on Saturday. Maher came out with an 8-5 win. 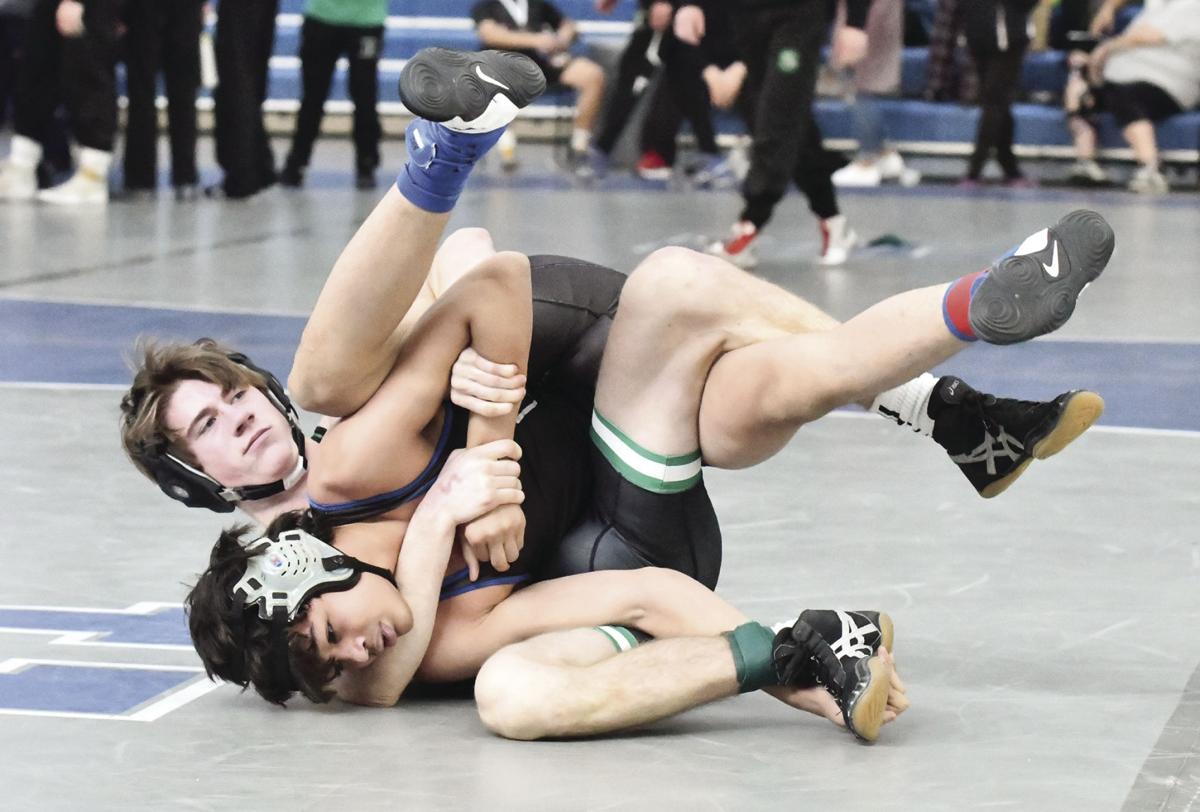 Hopkins junior Jaxson Williams, front, is held by Edina’s Jack Merriams during their fifth place match at 126 pounds. Williams won by a 17-5 major.

Hopkins junior RJ Chakolis, top, secured the 195-pound title at the Paul Bengston Invite on Saturday. He defeated Park of Cottage Grove’s Khrystian Mullen 7-5 in overtime to improve to 9-2 on the season.

Hopkins senior Demetrius Patton, top, controls BOLD’s Anthony Maher during the 195-pound final at the Paul Bengston Invite on Saturday. Maher came out with an 8-5 win.

Hopkins junior Jaxson Williams, front, is held by Edina’s Jack Merriams during their fifth place match at 126 pounds. Williams won by a 17-5 major.

Hopkins wrestling finished ninth Jan. 4 among the 13 teams with 77 points, two points ahead of Triton with a mix of classes represented as host of the Paul Bengston Invitational.

The Royals had six placewinners and two wrestlers advance to the finals in captains senior Demetrius Patton at 170 pounds and junior RJ Chakolis at 195 pounds.

The team was less than 100 percent with regular contributors out due to injuries. Senior Deonte Bryant was at an all-star football game.

Over the first month of the season, the focus has been on both to work on opening up more offensively.

“They’ve got so much talent and all these moves,” Tinkham said. “It’s just going out there having that free mind to go, go, go. You saw in RJ’s second match, it didn’t show up on the scoreboard but you saw the output. And that’s what I’ve been preaching to them. The more you output, the more you are going to get. Really, it’s about pushing the pace and keeping our conditioning going and then there is nothing like tournament conditioning to get you ready for everything.”

“Those two almost always find their way into the finals,” Tinkham said, also noting the success of the JV program with three champions, two runner-ups and a third-place finish among the nine entrants.

“A lot of first-year guys on the JV,” Tinkham said. “You throw a guy on varsity for the first year it’s tough but getting some wins under his belt helps.”

The setting, a big open space with lots of wrestlers and fans, helps acclimate those with less experience to what is to come at sections and perhaps state, to a certain degree.

“We try to keep that environment for the Hopkins tournament because you don’t see that many big tournaments in a huge arena, so it makes it feel more like a state tournament for those who will go in March,” Tinkham said.

Chakolis needed overtime to get past Park’s Khrystiyan Mullen with a 7-5 win in overtime for the title.

Chakolis, a junior, led 5-2 going into the third period as Mullen earned an escape and a takedown to tie the match at 5-5 in the final 25 seconds to force overtime.

It didn’t take Chakolis long to earn a two-point takedown 17 seconds into overtime to improve to 9-1 on the season.

Chakolis reached the final with a first-period pin and a 3-2 decision over Springfield’s Mason Rummel. Chakolis scored all three points in the second period on an escape early then takedown inside the final 30 seconds of the period. Rummel earned two escapes to narrow the final score.

Hopkins senior Demetrius Patton sat at 7-3 overall after falling to BOLD’s Anthony Maher in the 170-pound final on Saturday, 8-5.

Maher struggled to control a bloody nose and was just seconds away from a forfeit after using nearly all of the blood time in the third period.

Throughout the second and third periods, Patton tried to shoot but Maher defended each attempt to stay one step ahead.

Patton escaped from a takedown late in the first period but Maher earned a two-point near fall just 13 seconds into the second period. Patton worked free four seconds later and earned his own takedown 20 seconds after. Maher escaped ending the second period with a 5-4 lead.

Maher escaped to start the final period and took down Patton with only nine seconds left to make it an 8-4 lead. Patton earned an escape just before time expired to make it an 8-5 final score.

Williams came through with a dominant 17-9 major against Edina senior Jack Merriam on Saturday to land on the podium. Williams, a sophomore improved to 6-7 overall.

Reeves improved to 4-10 after a 6-4 decision over Como Park’s Laquan Burk in the fifth-place match.

Wolf defeated Pine City’s Jeb Wimmer 4-3 in overtime to improve to 2-2 on the season in the final.

Wolf opened the tournament with a second-period pin of Minneapolis South’s Ames Wyeth before BOLD senior Brady Ridler pinned Wolf in the semifinal. Park’s Shane Clemon pinned Wolf in the first period of the third-place semifinal before the overtime win to secure fifth place.

Sophomore Will Post (160) was sixth after coming up short against Como Park’s Simon Heck by a 3-2 decision in his fifth-place match.