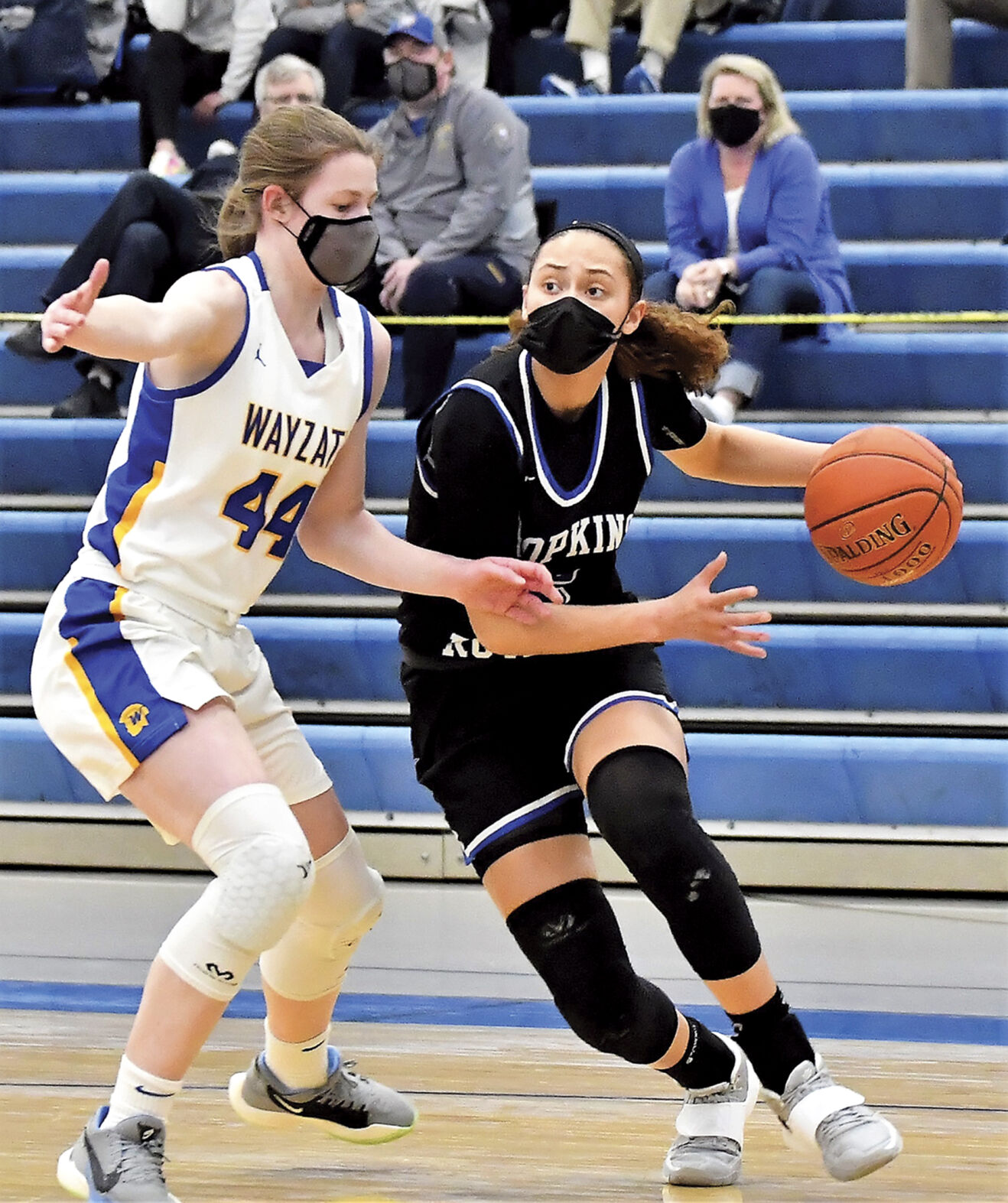 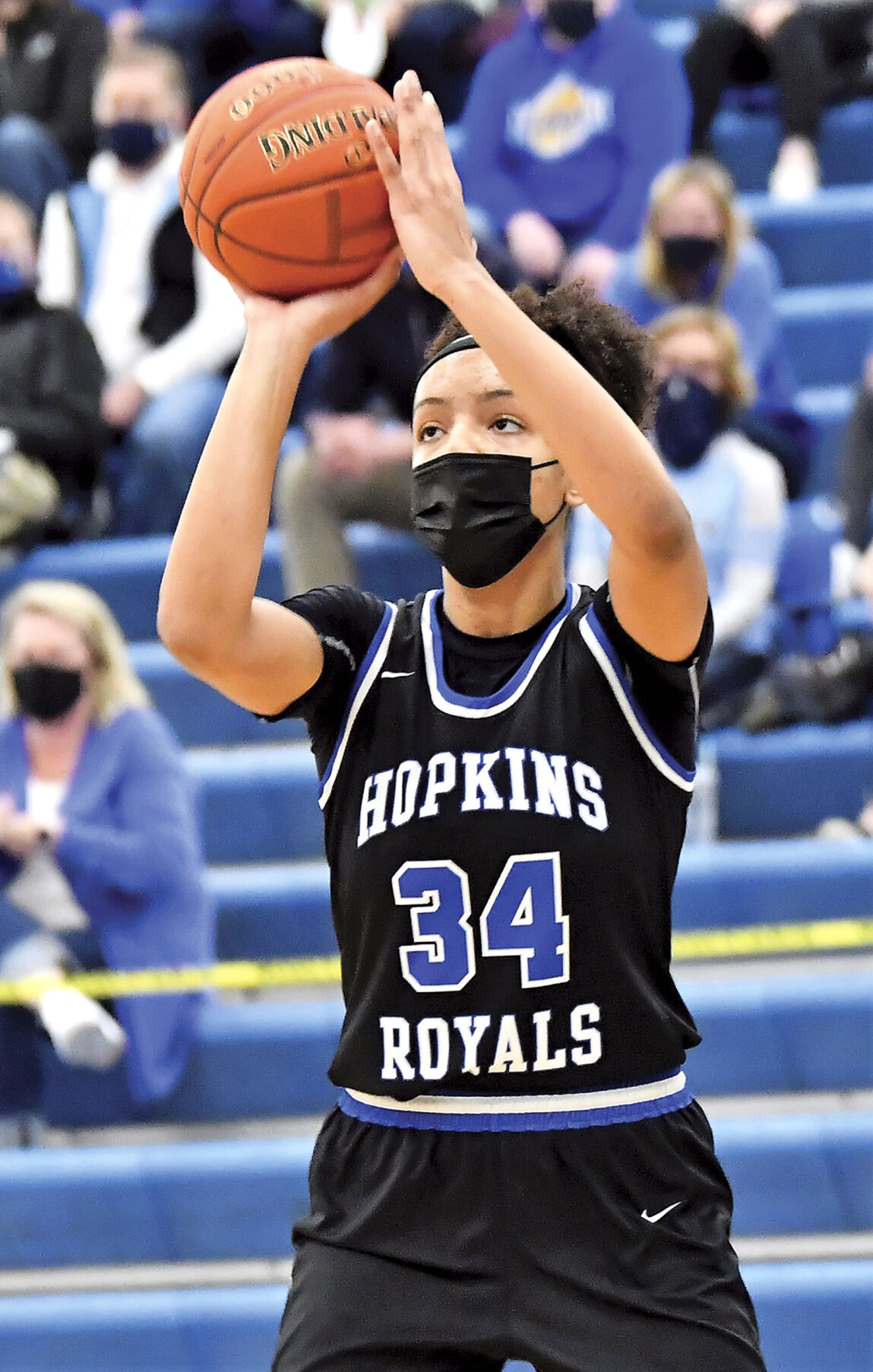 Hopkins forward Maya Nnaji appears confident as she hits a jump shot from the short corner during the Royals’ 80-58 victory over Wayzata.

Hopkins forward Maya Nnaji appears confident as she hits a jump shot from the short corner during the Royals’ 80-58 victory over Wayzata.

For four minutes the Wayzata High girls basketball team was firing on all cylinders March 25 in the 6AAAA section championship game at Hopkins.

With the score 10-4 in Wayzata’s favor, Hopkins head coach Tara Starks called timeout, refocused her team, and a minute and a half later Hopkins led 12-10. The Trojans tied the score at 12-12 before the Royals led the rest of the way to claim the title 80-58.

It was the 77th consecutive win for the Royals, dating back to the opening game of the 2018-19 season. And if the Royals can win three games at the State Class AAAA Tournament, they’ll go into the 2021-22 season with 80 in a row.

Wayzata head coach Mike Schumacher is one of the few coaches ever to break through Hopkins’ dominance of the section. He understands fully how hard it is to beat the Royals.

“We battled them,” he said. “I thought we competed well and showed a lot of heart. In the second half we were able to cut their lead to seven points.”

“I knew Wayzata would come out strong,” Hopkins head coach Tara Starks said. “They have two high-level kids who can score.”

Starks referred to 6-foot-2 senior forward Jenna Johnson and 6-foot junior guard Mara Braun. Johnson, who set the all-time section scoring record for three games with 92 points, was forceful in the title game, scoring 27 points. She had 27 in a first-round game against Armstrong and 38 in the semifinals against St. Louis Park. Johnson has accepted a basketball scholarship to play for the University of Utah next season. Braun has made a verbal commitment to play for the University of Minnesota.

Even against a team as good as Hopkins, Johnson and Braun were an outstanding 1-2 punch. Braun scored 15 in the championship game, giving the high-scoring duo 42 of the team’s 58 points. Point guard Brynn Senden scored seven points and forward Shannon Fornshell had five.

Wayzata came out in a 2-3 zone defense in the first half, and after a few adjustments, the Royals were able to attack it.

“They tried to close us up with the zone, but we were able to utilize our posts,” Starks said.

Wayzata’s Schumacher knew the zone would slow Hopkins down and it worked well even though the Royals had a decent first half and took a 37-25 lead into intermission.

Coach Starks of Hopkins has her eye on the State Class AAAA Tournament field.

“We had a light day of practice today [March 26], but the girls got lots of shots up,” she said. “Chaska, Farmington and Stillwater are all tough teams to beat.”