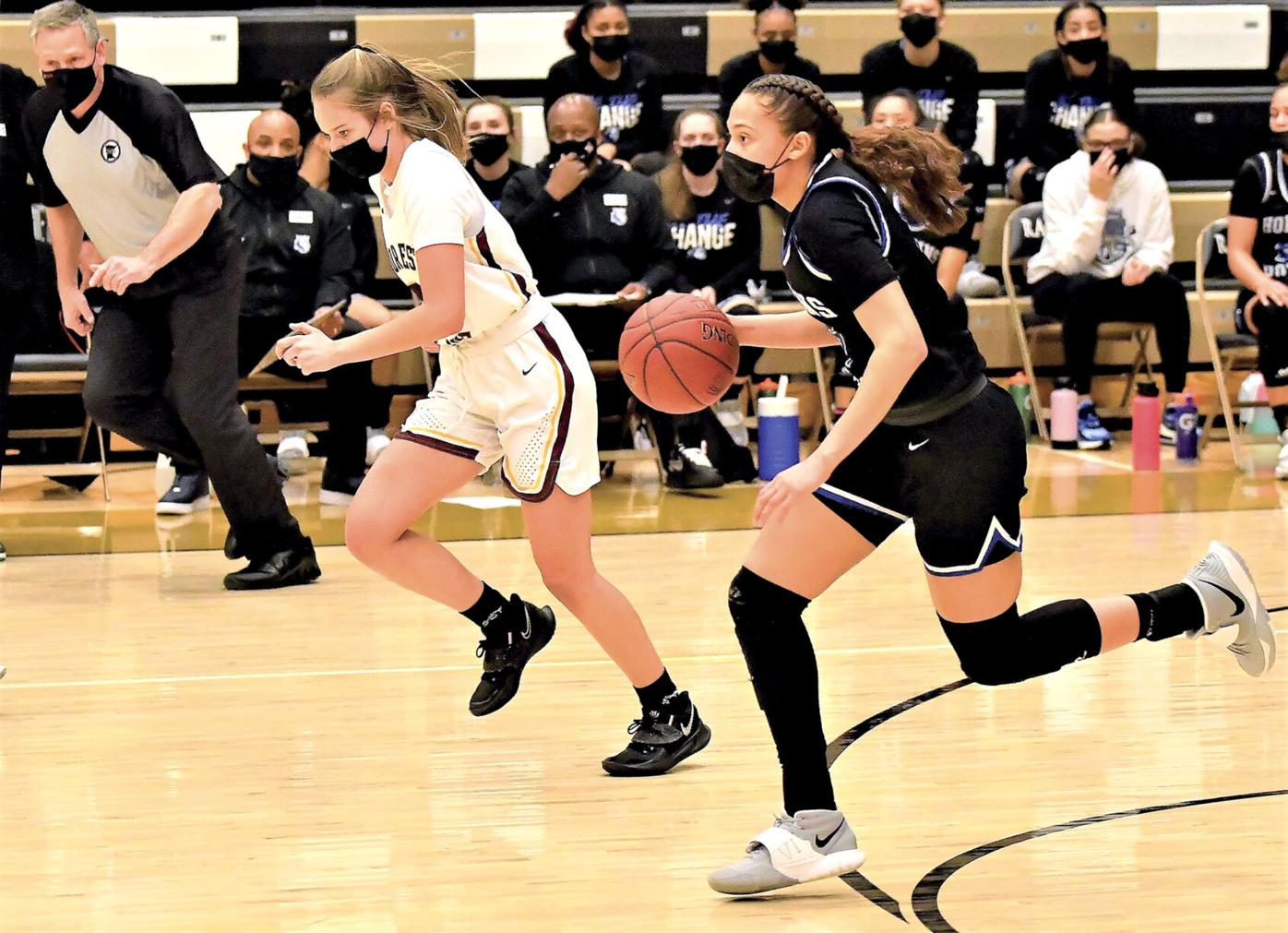 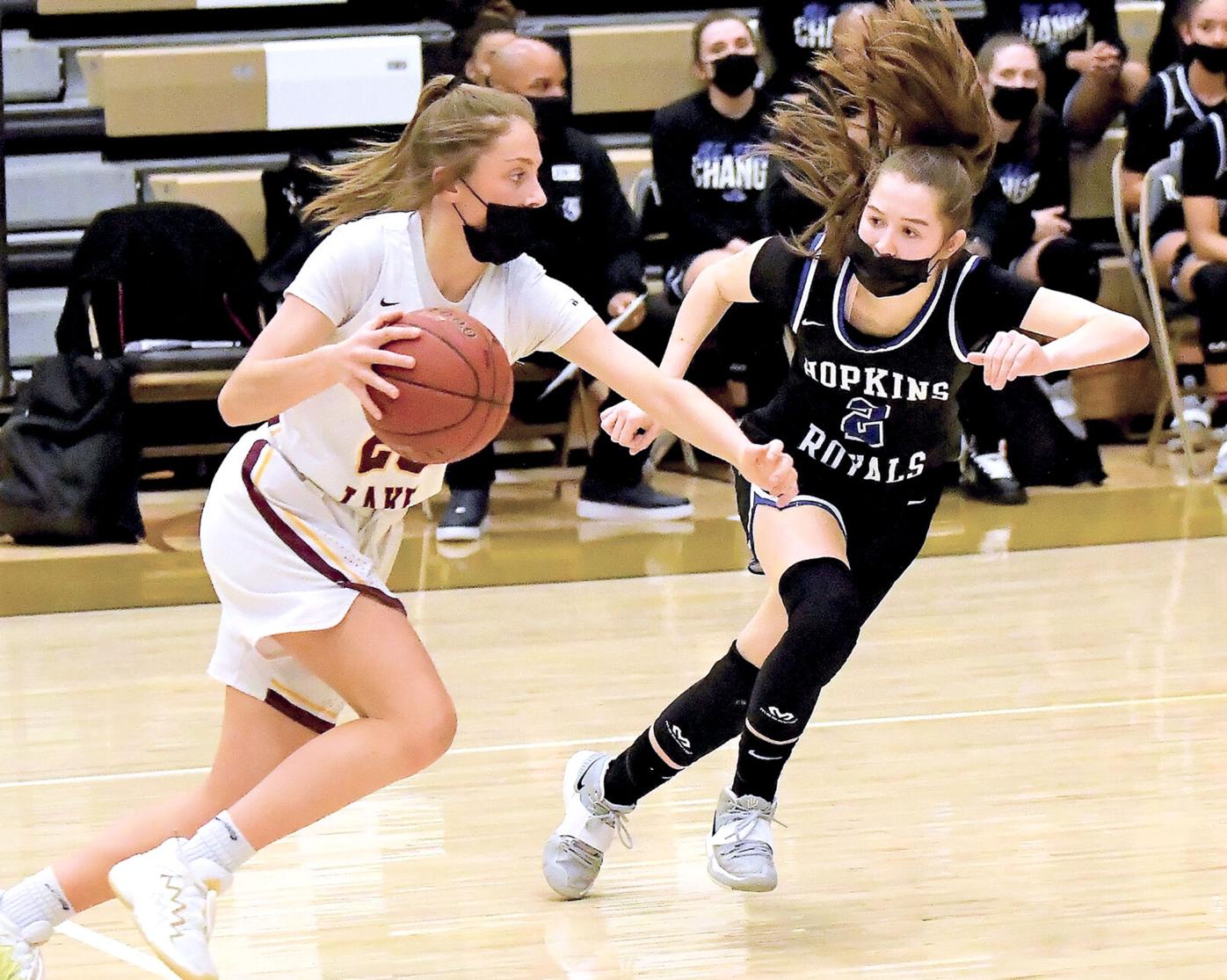 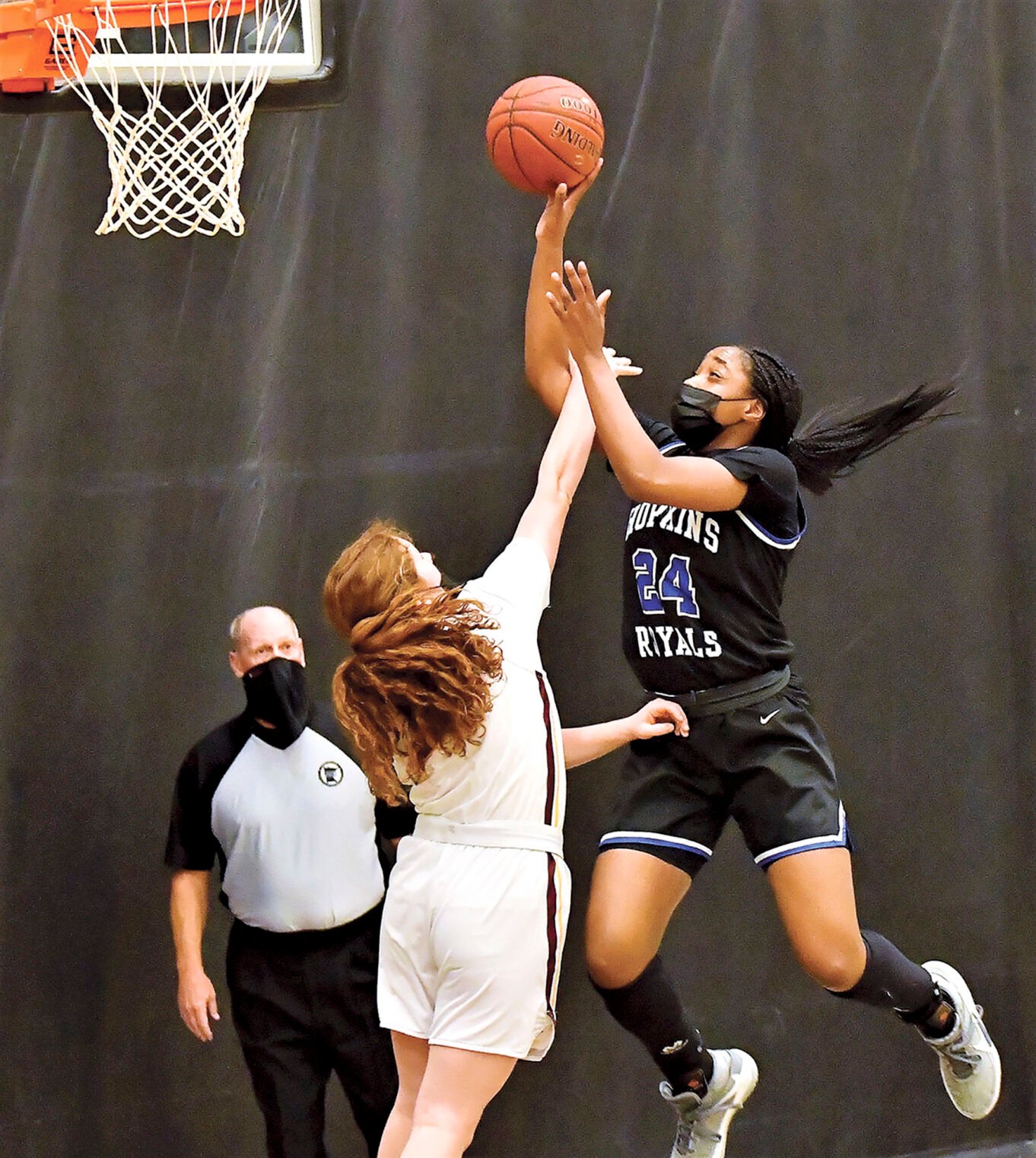 Nu Nu Agara of the Hopkins High girls basketball team catches a lob pass for an easy basket as the Royals cruise past Forest Lake March 30 in the Class 4A state quarterfinals.

Nu Nu Agara of the Hopkins High girls basketball team catches a lob pass for an easy basket as the Royals cruise past Forest Lake March 30 in the Class 4A state quarterfinals.

Going into the state semifinal against Chaska, which was on April 7 following the Sun Post’s Monday deadline, the Royals had a three-year winning streak of 78 games. Fosston won 78 games between 1999 and 2002.

Hopkins entered the game 16-0. Chaska was also undefeated before the semifinal.

In the other semifinal game Wednesday, Rosemount was scheduled to play Centennial. The state final is at 8 p.m. Friday, April 9, at the Target Center.

The game between Hopkins and Forest Lake was close in the early stages, but the Royals caught fire with consecutive 3-point baskets by Kelly Boyle, Liv McGill and Selam Maher that pushed the lead to 36-13.

Then, after two Forest Lake scores, Nu Nu Agara made an old-school, 3-point play for a 39-17 lead. Forest Lake was never able to get the deficit under 20 points after that. In fact, in the second half, Hopkins would boost its lead to 71-31 on a basket by McGill.

Boyle and Maher had three points each, and Jazmine Johnson rounded out Hopkins’ scoring with two points.

Logan Anderson and Greta Krieger led Forest Lake with 12 points each. Josey Kehl was on target for 10 points, while no other Ranger scored more than three.

“Looking at Forest Lake, I knew we would have an advantage inside and on the glass,” Hopkins head coach Tara Starks said. “We were able to get out and run the floor. I though Forest Lake would play zone, and we were prepared. When our girls knocked down those three straight threes, we pushed Forest Lake to the brink.”

While the Royals are taller than Forest Lake, they also proved to be quicker than a Forest Lake club that is known for its quickness. The Rangers came into the game with a 17-3 record.

Turning her attention to Chaska, coach Starks said, “We were supposed to play them during the season, but the game was canceled due to a COVID situation. I have watched a ton of film on them. The main thing for us is to stay true to who we are. We’ll are ready to play.”

For four minutes the Wayzata High girls basketball team was firing on all cylinders March 25 in the 6AAAA section championship game at Hopkins.