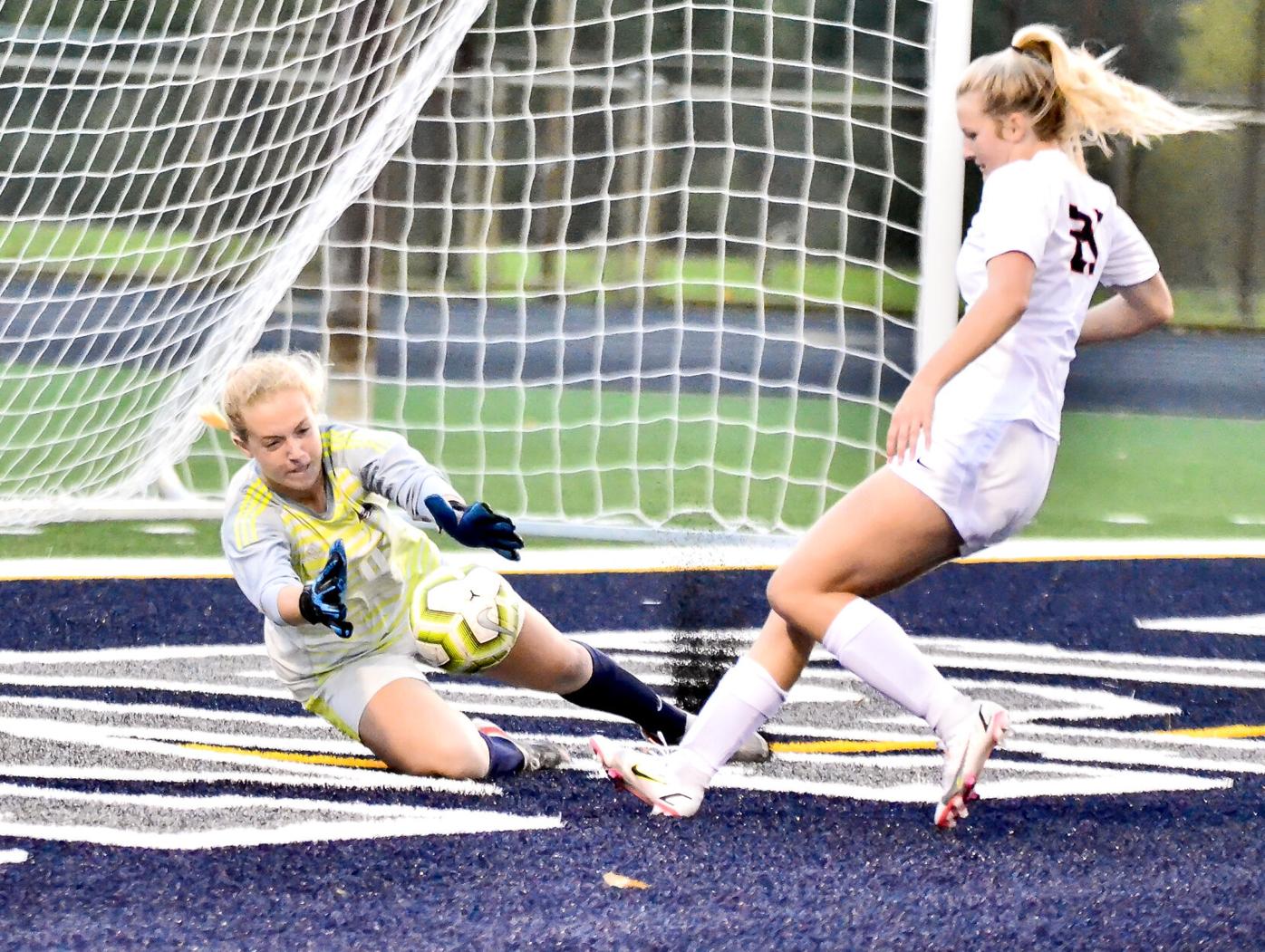 Champlin Park junior goalie Sarah Martin makes a save on a shot by Osseo senior forward Presley Kraemer Oct. 12 in a 5AAA section quarterfinal. The Rebels won the match 3-0 before falling to Mounds View in the section semifinal Oct. 14. 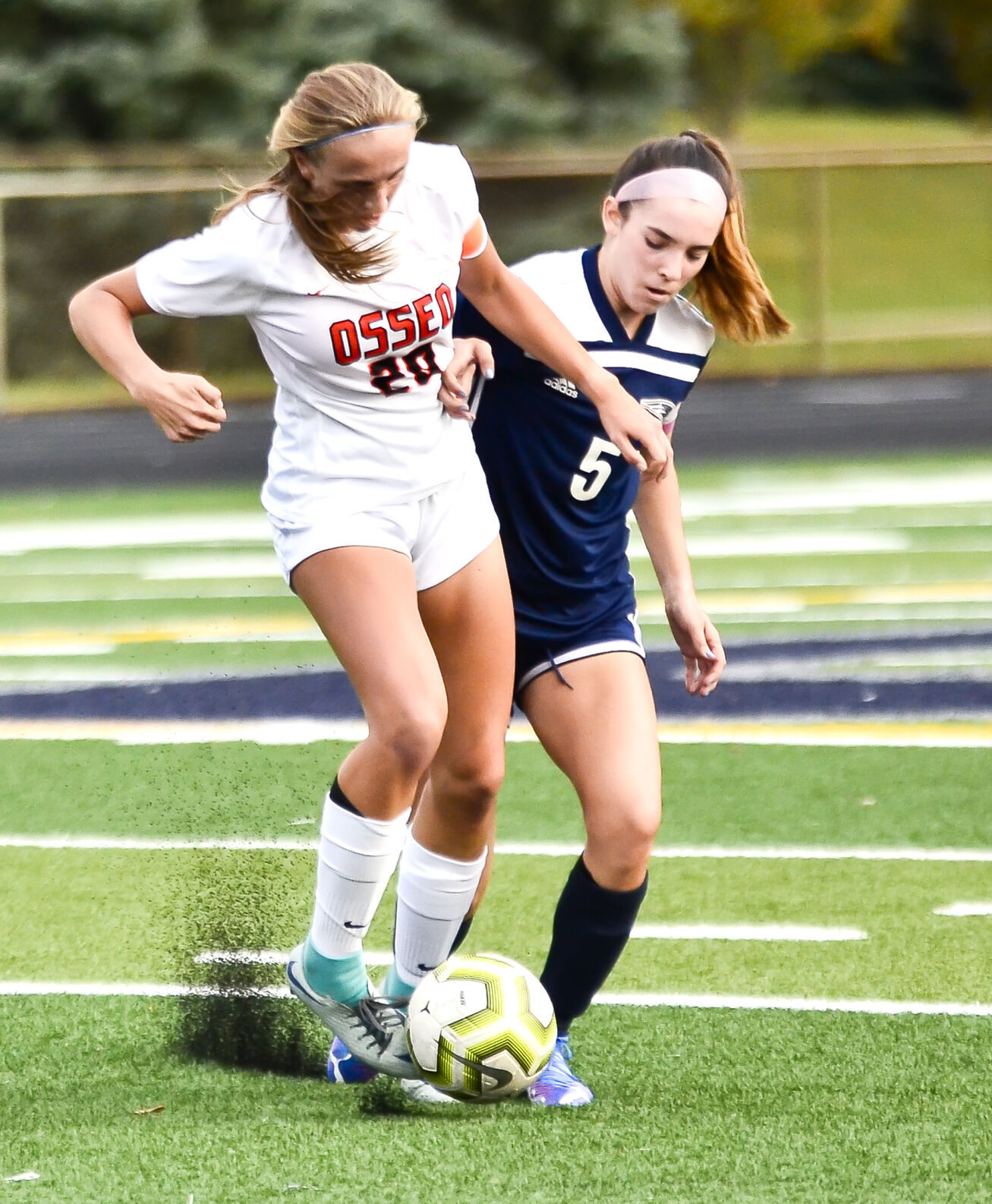 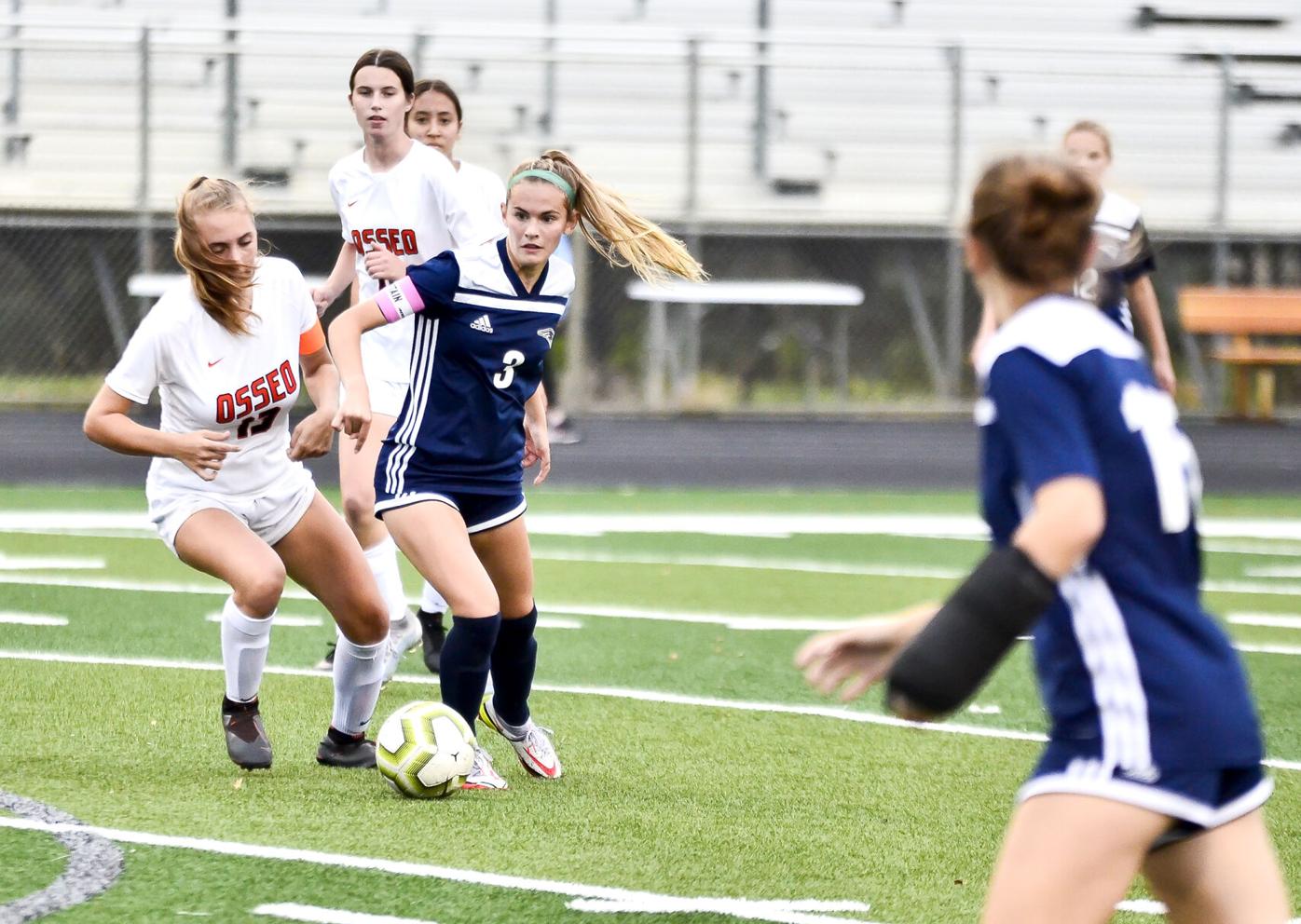 Champlin Park senior captain midfielder Allie Hartig fights through a defender before passing the ball in the first half Oct. 12 in a 5AAA section quarterfinal against Osseo. 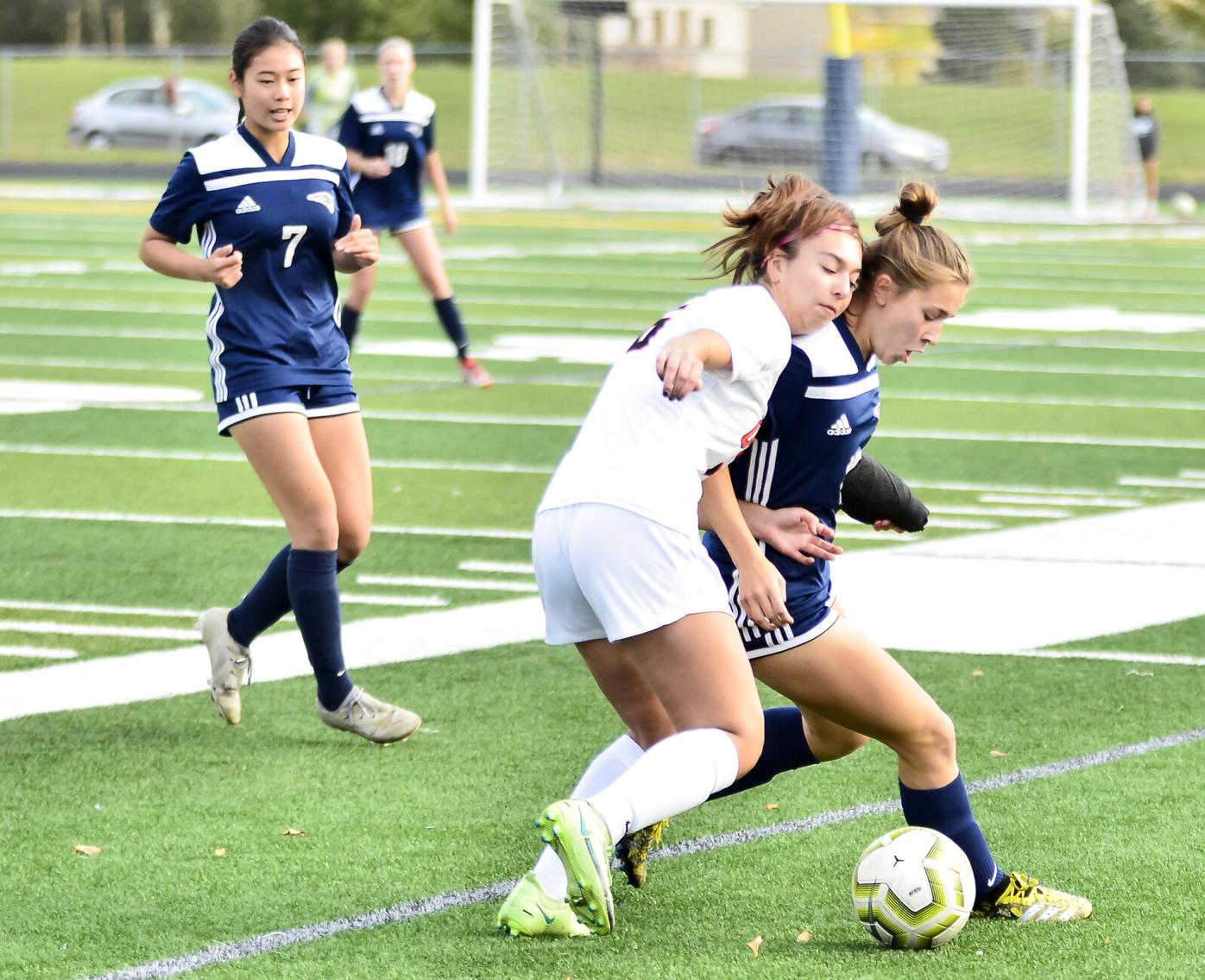 Champlin Park junior goalie Sarah Martin makes a save on a shot by Osseo senior forward Presley Kraemer Oct. 12 in a 5AAA section quarterfinal. The Rebels won the match 3-0 before falling to Mounds View in the section semifinal Oct. 14.

Champlin Park senior captain midfielder Allie Hartig fights through a defender before passing the ball in the first half Oct. 12 in a 5AAA section quarterfinal against Osseo.

Champlin Park girls soccer came within one game of making the section final for the third straight season after winning back-to-back 5AA titles.

The third-seeded Rebels (10-5-3 overall) dropped a 2-1 decision Oct. 14 to second-seeded Mounds View to close the season in the 5AAA semifinals. They did handle sixth-seeded Osseo 3-0 in the quarterfinals Oct. 12.

But once again, there were several key players who are expected back in 2022.

It wasn’t easy for the Rebels in the section opener Oct. 12 as Osseo did all it could to limit chances with senior captains Malerie Williams, Gabriella Baltes and Olivia Larson all challenging and closing off passing lanes.

In fact, the game looked to be headed to halftime scoreless before Kalal was able to recover the ball after a block and knock a goal into the lower left of the net for a 1-0 lead with just 24 seconds to go in the first half.

Before that goal, the Orioles back line played well.

Olivia Mehl had a shot saved early, and Scott had a header go wide right. Kalal also had a shot go wide and another that was saved at point blank range by senior Chloe Lewis.

Williams later blocked a shot by Scott and also won a ball on a pass to Kalal, and Baltes was able to get a clean tackle on a Kalal run that might have been a 1-on-1 opportunity.

On the other side, Marsolek was able to block a shot by senior forward Presley Kraemer, and Osseo sophomore forward Layni Yang had a shot that Martin saved.

The first 16 minutes of the second half were close, as well.

Martin saved a shot by Kraemer, and a Kalal corner went to Olivia Mehl who shot the ball wide right.

Hartig had a shot saved on a high bouncing ball, and Kalal had a 1-on-1 that was saved again.

Martin made the save of the game, diving to her left to stop a Kraemer shot a little later in the game.

Kalal had several opportunities following that save, and the second goal finally came in the 57th minute.

It was all Kalal with her dribbling around the defense to set up the shot, which was buried in the lower right of the net for a 2-0 lead.

Kalal completed the hat trick with another goal in the 72nd minute. Easley had a cross that Kalal knocked in on a header to make it 3-0.

Martin made one more save on a Kraemer shot, and Hartig and Kalal cleared a Baltes free kick to preserve the shutout.

Kalal scored again with an assist to Keding, but it wasn’t enough in a 2-1 loss Oct. 14 at second-seeded Mounds View.

Kalal ended the year with 21 more goals than the second-best scorer on the team and tied for the team lead in assists.

Martin was under a lot of pressure and still stopped 10 of 12 shots.

There were several chances for Champlin Park girls soccer to score Sept. 18 against Elk River, but the host Rebels settled for a scoreless tie…