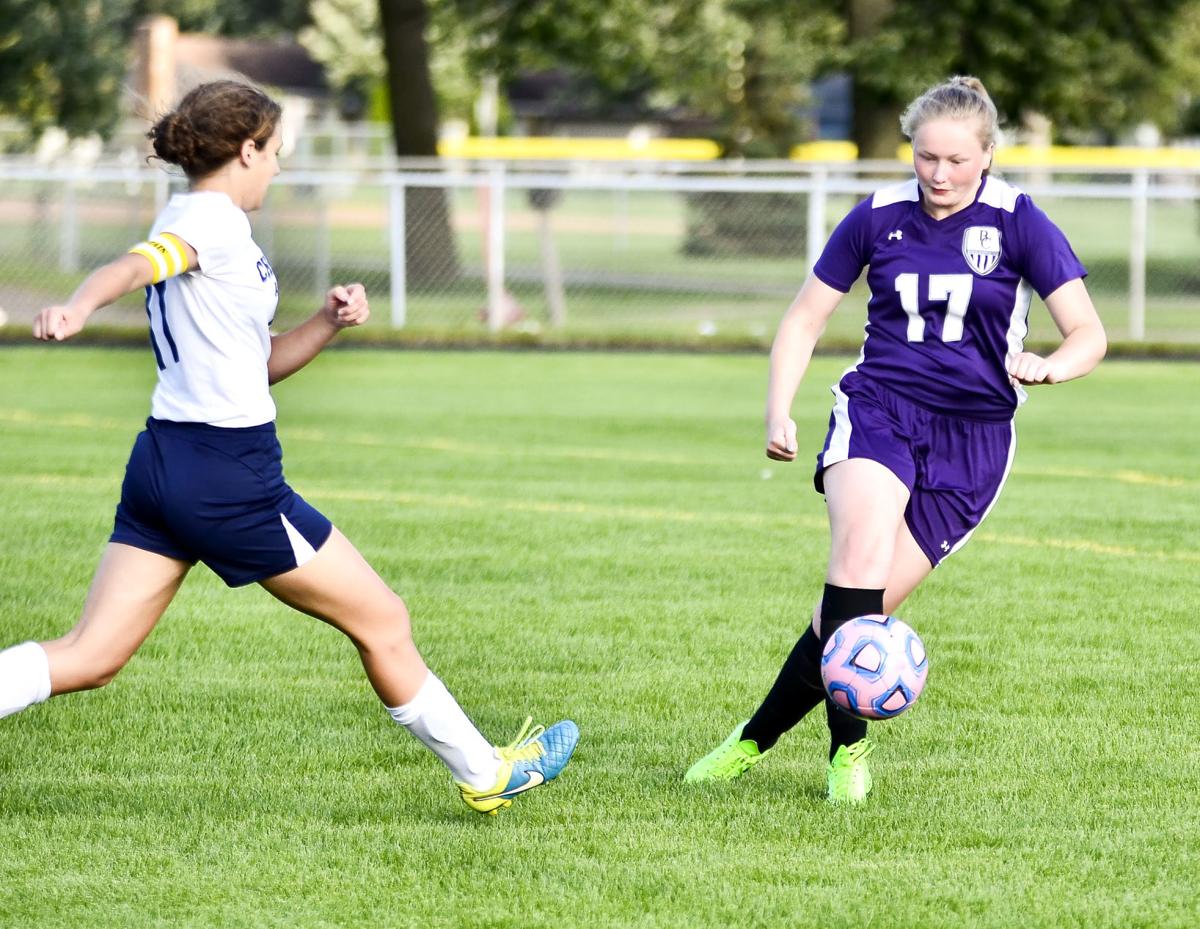 Brooklyn Center senior Megan Falnes races over to gain possession in the corner during a match in the 2019 soccer season. Falnes was selected as the 2020 Minneapolis Athena Award winner for Brooklyn Center. 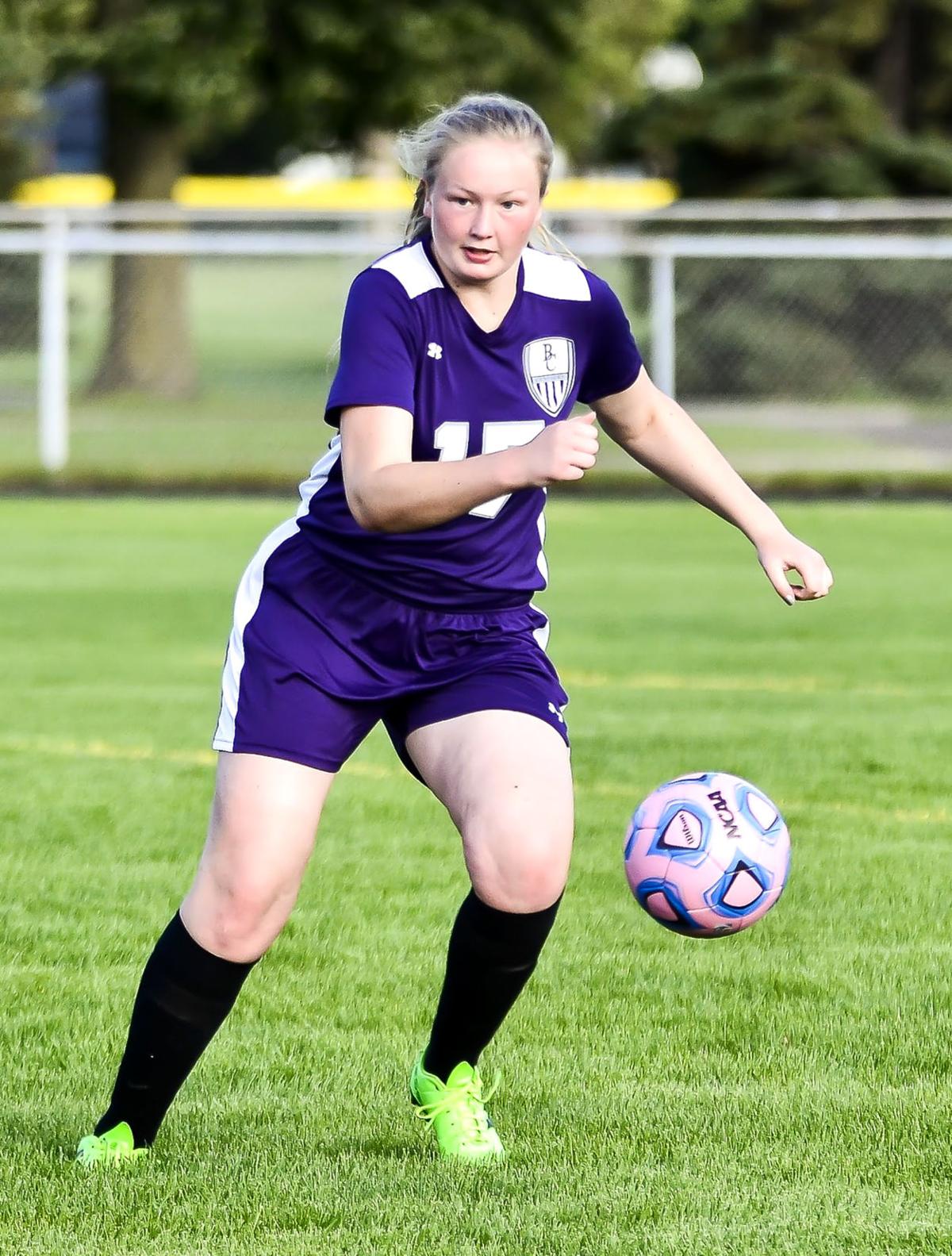 Brooklyn Center senior Megan Falnes looks to gain possession during the soccer season. Besides soccer, Falnes also wrestled and played softball. She was also in theater and will study Cinnematic Arts at the University of Southern California.

Brooklyn Center senior Megan Falnes races over to gain possession in the corner during a match in the 2019 soccer season. Falnes was selected as the 2020 Minneapolis Athena Award winner for Brooklyn Center.

Brooklyn Center senior Megan Falnes looks to gain possession during the soccer season. Besides soccer, Falnes also wrestled and played softball. She was also in theater and will study Cinnematic Arts at the University of Southern California.

Falnes was in wrestling season, which wasn’t when she expected to find out if she had won. Athletic/activities director Nate Gautsch told Falnes, who is the first female Brooklyn Center/Concordia Academy wrestler, in the wrestling room with the entire team.

“Coach completely surprised me,” Falnes said. “Honestly, no, I wasn’t thinking of the award at all. I’ve known about it from previous years, and I suppose that I always wanted to win it. It was just crazy because he read it in front of my entire team but at the time I was in wrestling. So he just read it to my wrestling team. I thought that was kind of fun.”

Falnes joined a list of female athletes at Brooklyn Center when she was named the 2020 Minneapolis Athena Award recipient for the school.

Mary Dorff took home the first Athena Award for Brooklyn Center in 1973, and Falnes is the latest.

“I suppose it kind of justifies all the work that I’ve put in,” Falnes said. “Of course, I didn’t start seventh grade on varsity aiming for the award. I think it’s cool that it kind of congratulated me for putting in the hours in.”

Falnes had 13 overall varsity letters in three sports – six with soccer, five with wrestling and two with softball.

Academically, Falnes received the Thielen Foundation Leadership Scholarship, which comes with a $1,000 higher education scholarship given to a varsity athlete on each Brooklyn Center team that goes above and beyond and exemplifies leadership qualities on their teams and in the classroom.

That goes along with Falnes’ other scholastic achievements such as being on the National Honor Society and winning the 5AA section Academic Achievement award.

For the soccer team, Falnes claimed four team MVP awards for the program.

Falnes said that she thinks her senior year of soccer is what helped her stand out because she was able to be a part of the team in a new way – not just the senior leadership aspect but also with the close friendships and camaraderie of the 2019 team.

“This year, we were more of a family, which sounds kind of cheesy, but my teams never experienced that in my six years of being on the team,” Falnes said.

Falnes said that the closeness of the team made her want to be at practices and games more than she ever did before. And it also allowed the team to grow together on the field – especially with a team that included seventh- and eighth-graders.

Falnes was a sweeper for the 2019 season, helping the young team defensively. The program only has one team, so seventh and eighth graders that join soccer are guaranteed to be on varsity.

Falnes played with 12-year olds at times this season because of that, but she showed trust in them and watched them improve by the end of the year. She said she was once in their position and used that experience to help the younger girls.

“I was that seventh-grader too on the varsity field, and it is just terrifying,” Falnes said. “So I think that’s what I did the best at – supporting my team that way because I knew what it was like to be so young and dare I say, inexperienced.”

Besides soccer, Falnes also became the first BCCA female wrestler as a sophomore.

She started as a team manager and made the jump to wrestling in matches, but Falnes said she actually hated the sport at first.

The reason she became a team manager was to help her sister, who was a manager at the time. But in the two years as a manager, Falnes said she fell in love with the sport.

“I think my coach saw it coming, so he was able to prepare for the challenge of having a female wrestler,” Falnes said.

Falnes said she loves every second of it, but it was a huge mental challenge for her and was intimidating. That was something she didn’t expect at first, but the many ways the sport challenged her was an obstacle to overcome.

“Even socially, I was challenged,” Falnes said. “It is no longer soccer when you are in a bus full of teenage girls your age. Now I was in the middle of a team of 30 guys, and dare I say, I was worse than every single one of them.”

Many teammates had also been wrestling for six to 10 years already, and she was coming in as a first-time wrestler.

“It was just a lot of catching up to do,” Falnes said. “And you have to kind of humble yourself, I suppose.”

Falnes also went from hating the sport at first to including her experience in her favorite sports memory at Brooklyn Center.

She wrote in her Athena Award document, “My wrestling shoes fit perfectly inside of my bedazzled, pink, fluffy slippers.”

That was a reference of balancing being in theatre and wrestling at the same time.

Outside of sports, theater is a huge part of Falnes’ life. She is a theatre student director, an actress and a props/set/costume designer.

Falnes talked with her director and coach about staying on the varsity wrestling team and still participating in the senior musical. She said she balanced out her schedule to do both, and she had to run from the theater to the wrestling room.

Falnes said that the run would make her shoes dirty with sap or dirt, so she brought the slippers to go to and from.

“It kind of fit my personality perfectly, and it matched my neon pink wrestling shoes,” Falnes said. “It just kind of became my thing, and I would wear them at matches and stuff. I think it just kind of added my flare of confidence to such a complex challenge that I had to face.”

Falnes said that theater has been just as important as sports during her time in high school, if not more important.

She wanted to get into entertainment or cinematography and needed it on her resume for college.

“To me, I had to sit down every season and have that serious conversation with my coaches,” Falnes said. “I promised my coaches that the sport means a lot to me, but I also want to be a part of this dramatic and non-stereotypical project of being in theater.”

Falnes said the coaches were great with allowing her to make a schedule around both theater and sports to be able to do both.

And that also allowed her to bring her friend groups together.

“Now my athletic friends can come and watch me sing on the stage,” Falnes said. “It is kind of fun to see those two groups come together. That is what it meant to me.”

Falnes is continuing her dream and goal of being in the cinematic arts, which she said she has had for around 10 years. She was recently accepted into the University of Southern California and is majoring in cinematic arts and media studies.

She chose USC because a lot of her role models graduated from there, and the size of the campus is something that drew her attention. It was her dream college choice, and she made it.

“When I got a yes, it just kind of blew my mind,” Falnes said.

And Falnes is excited to start the next chapter in her life, she said. She has been taking virtual tours of the campus and meeting professors and students over video.

“To be a part of such a massive and intelligent community, I am so excited,” Falnes said. “Getting there is going to be confusing and stressful. How does an 18-year old fly on a one-way ticket to California and stay there for a year? But I suppose they are all happy fears.”

Dealing with the pandemic

Falnes said she was looking forward to the banquet after a friend who also won the award talked about it and to be able to hear her name called out with wrestling listed as one of her accomplishments.

She does understand why the banquet had to be canceled, Falnes said.

Falnes is one of many students that have had their final senior semesters jumbled due to the pandemic.

Not having prom hit her hard, she said. And while she can’t complain about distance learning, Falnes said it is still difficult. Instead of two-hour-long lectures, she said there are eight-minute videos.

“It’s not their fault, it’s just not the same as being face-to-face,” Falnes said. “It’s just different and a bit harder.”

Falnes has been able to have connections with senior friends over video, even playing Battleship over the internet. She does miss the opportunity to be a senior in school and to be able to talk with underclassmen.