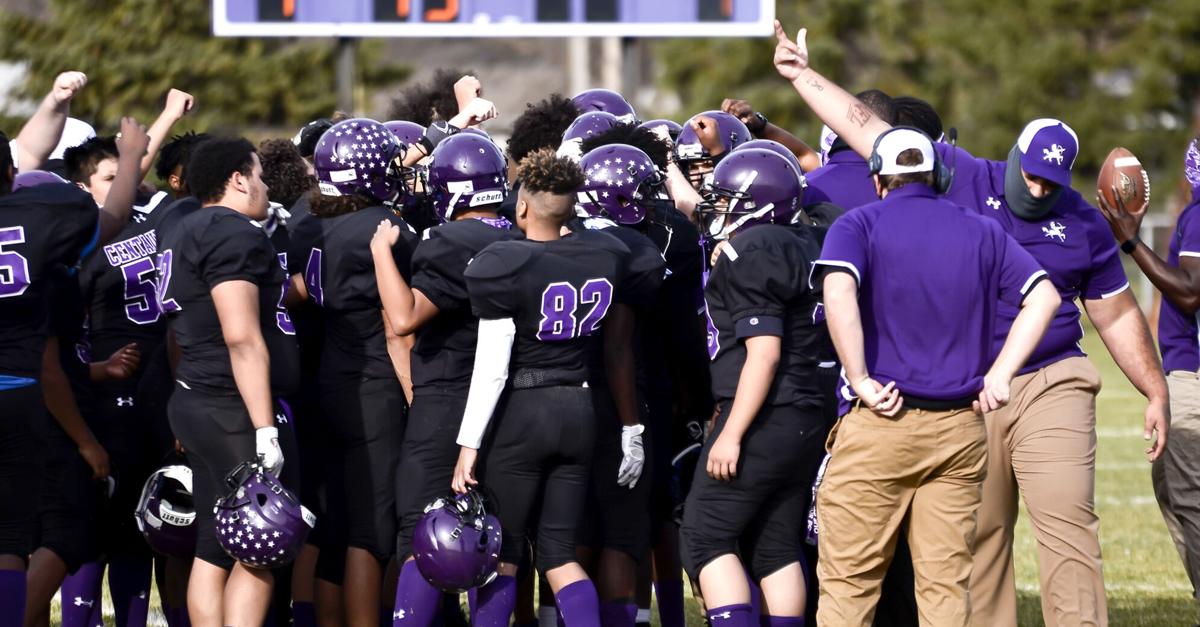 Brooklyn Center football gets ready in the pre-game huddle before a game against South earlier this season. The Centaurs finished 5-1 overall in 2020 and won the Twin City - Gold title, the first regular season title for Brooklyn Center since 1998. 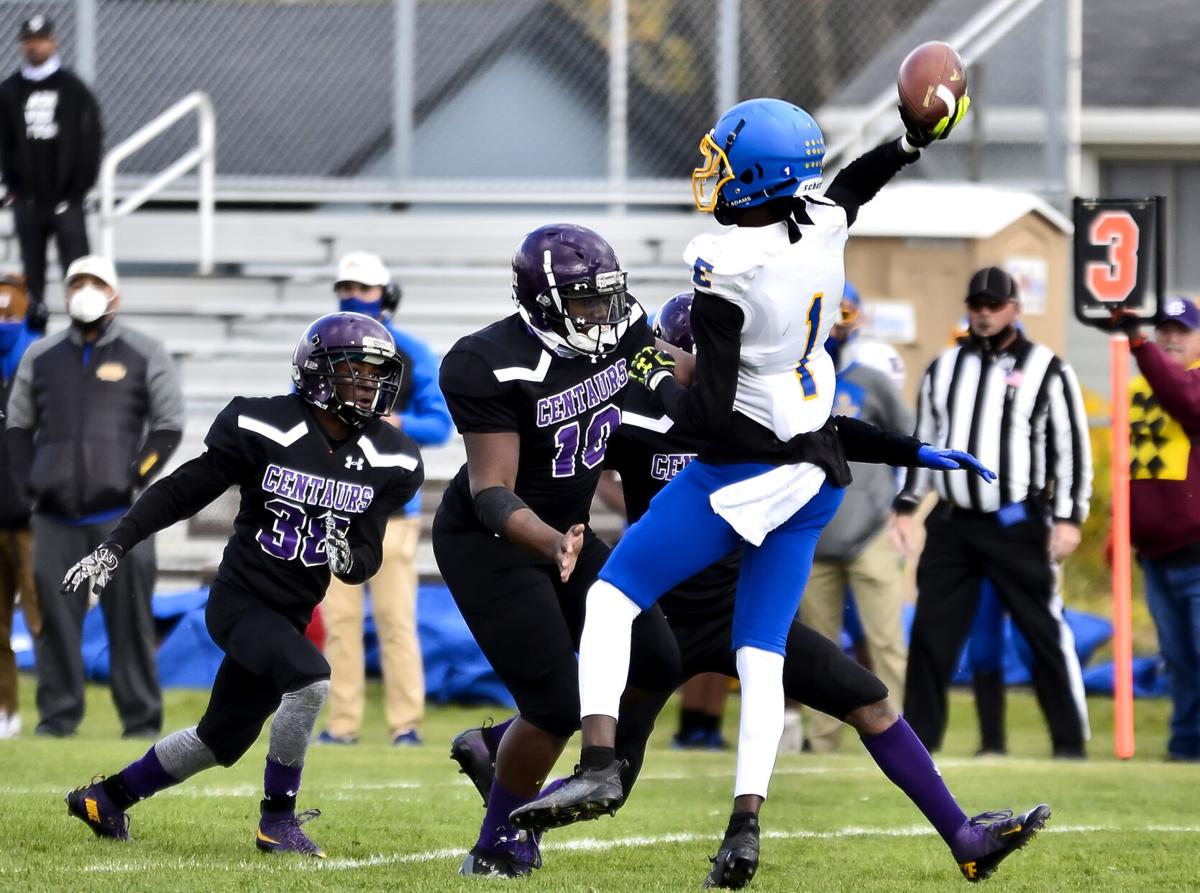 Brooklyn Center junior linebacker Rahmal Tarr, pictured forcing a throw by pressuring the quarterback against Edison, is one of several players expected back in 2021. Junior defensive back Shelton Lovaloy (38) is another. 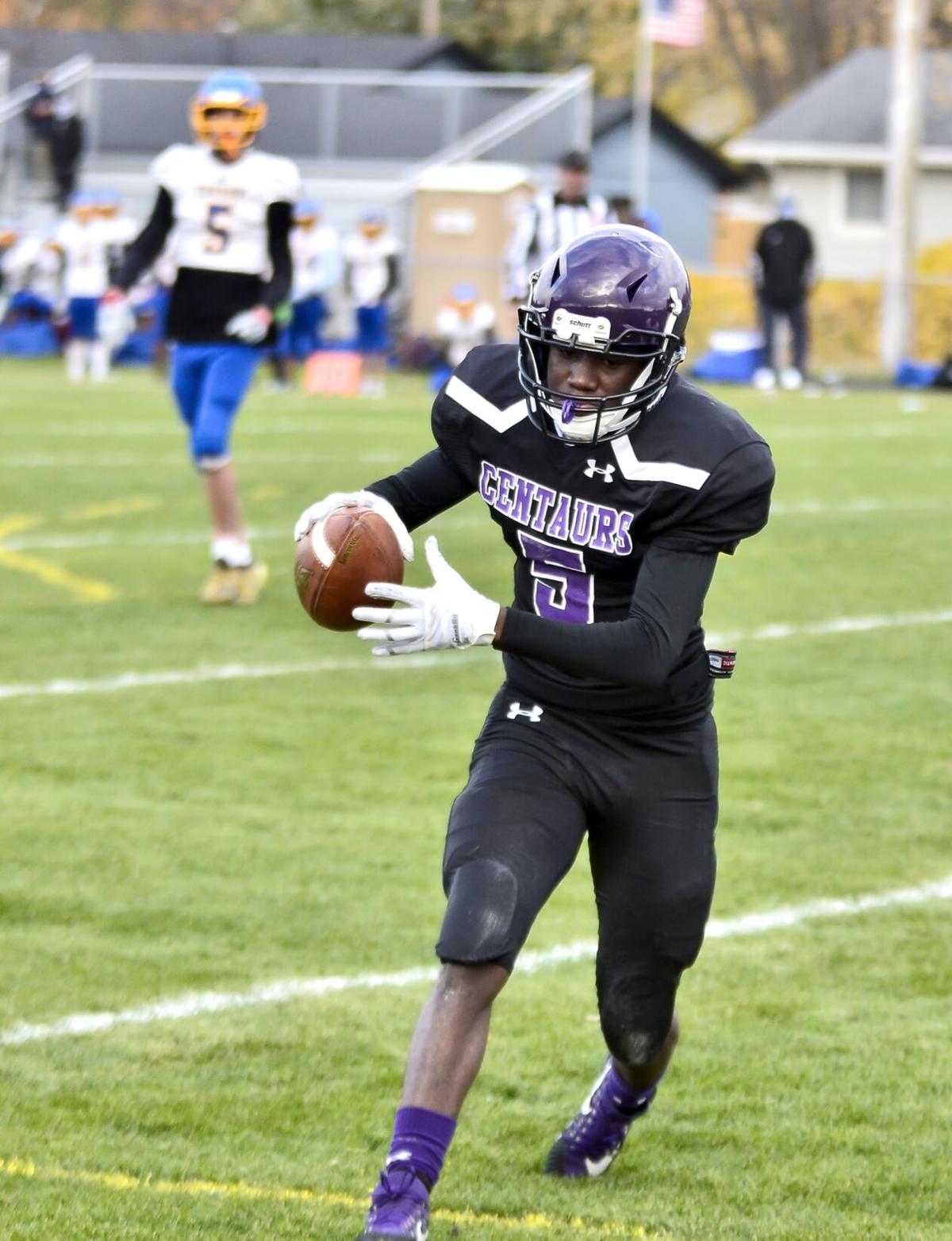 Brooklyn Center senior Ben Wehyee, pictured making a two-point conversion catch against Edison, went through a few tough seasons with the Centaurs before ending his high school career as a district champion this season.

Brooklyn Center football gets ready in the pre-game huddle before a game against South earlier this season. The Centaurs finished 5-1 overall in 2020 and won the Twin City - Gold title, the first regular season title for Brooklyn Center since 1998.

Brooklyn Center junior linebacker Rahmal Tarr, pictured forcing a throw by pressuring the quarterback against Edison, is one of several players expected back in 2021. Junior defensive back Shelton Lovaloy (38) is another.

Brooklyn Center senior Ben Wehyee, pictured making a two-point conversion catch against Edison, went through a few tough seasons with the Centaurs before ending his high school career as a district champion this season.

The Centaurs (5-1 overall) had already claimed the Twin City - Gold title the previous week, but this win put an exclamation point on the shortened 2020 season.

Brooklyn Center would have also gotten a home playoff game as a top-three seed in the 5AAA section tournament, but rising COVID-19 cases in the area forced the school district to go to a full distance-learning model and end all athletics starting Nov. 16.

Even without a postseason, the 2020 squad joins other top teams in school history – including the 1982 state champion squad and the 1998 team that last won a conference/district title.

Following the win over South, players and coaches took it all in on the field.

“They all pretty much told me after the game that that is something they will never forget,” coach Chauncy Williams-Barefield said. “It is special to be a part of a memory like that.”

He said the season began with high expectations even with the COVID-19 pandemic making things a lot different than usual.

For one, there wasn’t the normal offseason as there were limitations on summer practices, and then the season was initially moved from the fall to the spring in August before moving back to the fall at the start of October.

But with the talent and the work and effort on-and-off the field, Williams-Barefield said the coaching staff let everyone know that there were high expectations.

“If we play Centaur power football – on offense, defense and special teams – and we don’t hurt ourselves too much, there are not too many teams that can beat us,” Williams-Barefield. “It just comes with that commitment to giving your best effort day-in and day-out and the work and the sacrifices it takes to be great.”

Changing the culture was also a chief goal for Williams-Barefield from the first day he took the reins as head coach last season. He was already the offensive coordinator and now had seniors on the team that he started to coach when they were freshmen.

And the last few years have been tough with a combined 9-18 record, including just two wins in each of the past two seasons. All of this while area teams like Minneapolis North, Champlin Park, Robbinsdale Cooper and others were having a lot of success.

And then came some adversity after a 3-0 start this season. There was a 42-0 loss at Breck and a tough game against South. There were several penalties and a late run by South that pushed the game into overtime.

And there was a third-and-16 play with Brooklyn Center down and needing a touchdown and a two-point conversion to win.

Williams-Barefield said the Centaurs faced the moment like a family. He said he told his team, “It has been 22 years since anybody said they were a champion of anything for football. Why not us? Let’s go ahead and make this statement.”

“It was a challenge to continue to keep them believing that it was possible for us,” Williams-Barefield said. “It was just a great feeling to see their hard work pay off on the field. It was electric.”

The community support was also key in the culture change. Even though no fans were allowed in the stadium, families would social distance around the outside of the field to cheer the team on.

And others showed support with text messages, emails and phone calls.

“We wore that with pride,” Williams-Barefield said. “We really wanted to represent our city and represent our school. ... It was great to have them be a part of what we have accomplished because we did it for them.”

Brooklyn Center also never had a COVID-19 case or game postponements in 2020, which other area schools cannot say. Williams-Barefield said he and his staff did the best they could to follow all of the Minnesota State High School League and school administration and athletic department protocols, including sanitizing hands and wearing masks.

“The thing I kept stressing to our kids is that there are a lot of kids throughout the country who are not able to play football, given what is going on with COVID-19,” Williams-Barefield said. “Every day, every practice was a gift, and part of our team motto is that we give our best effort and that it takes no talent to give your best effort. And we approached each day with that level of gratefulness in our heart. We worked hard everyday knowing that tomorrow could be our last practice, our last game.

“It helped fuel us to accomplish our goals this season.”

Early on, Williams-Barefield said he sat down with his coaching staff with a vision of what he wanted Brooklyn Center football to be.

Liebelt put his own spin on the run-first game, and Williams-Barefield said he created a juggernaut. The Centaurs averaged over 250 rushing yards a game with a number of games with over 300 rushing yards.

“Coach Liebelt and his staff did an amazing job of putting together our system and coaching it up,” he said.

Young on defense led a change to a 3-4 style defense with only three defensive linemen. Turnovers were up, and Brooklyn Center cut the total yards per game in half and opposing rushing totals by 75% from last year to this year.

Overall, the Centaurs were in the top two in their league against the run.

Williams-Barefield said that he was blessed to have all of the paid staff and volunteers who showed a passion to work with the student-athletes and who built relationships and connections.

“I have been saying this the past two years but I feel confident that we have the best coaching staff as a unit in the state, and some of that started to show its fruit on the field,” he said.

Looking to the future

And the future remains bright with several key players expected back in 2021, not to mention the hope that the pandemic finally begins to improve to allow a closer-to-normal offseason when next summer rolls.

But many playmakers were juniors or younger in 2020.

“We have been so young for so long, so some of these kids are finally starting to grow up a little bit and that definitely helps,” Williams-Barefield said. “We are feeling really good about what we got going on.”

The success of this season should also help with recruiting. Numbers were low due to COVID-19, not surprisingly, to start this season. But more athletes joined the team a few weeks in.

Williams-Barefield said that the word has gotten out about the hard-working, fast and furious and very fun atmosphere. Practices remain lighthearted, and more and more student-athletes want to be a part of the Centaur family, he said.

“We look forward to being able to carry it over into next year and have even more kids be a part of the program,” Williams-Barefield said.