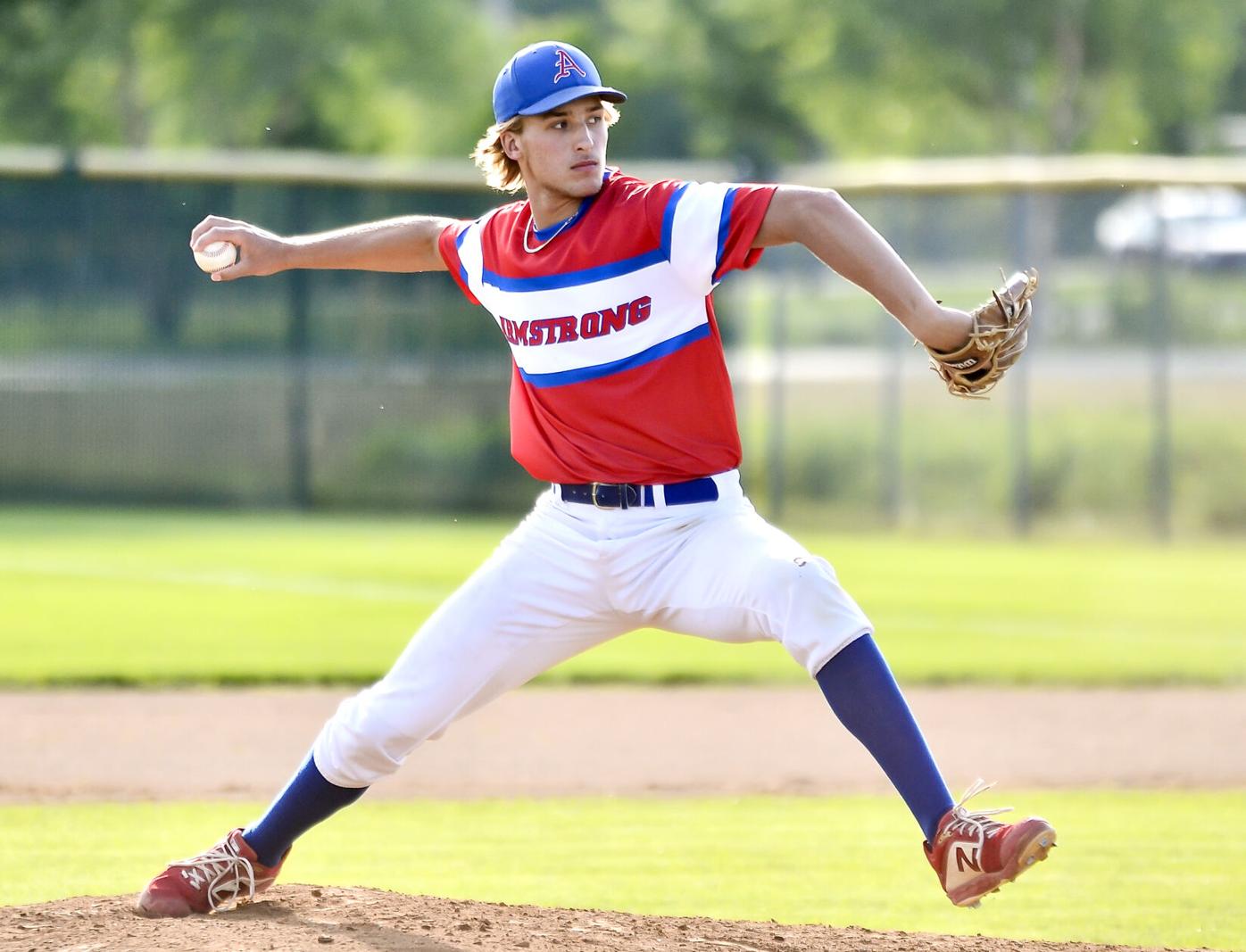 Armstrong's Mac Olson throws a pitch in the first inning July 8 at Elk River. Olson went six innings and struck out three in a 3-0 loss. 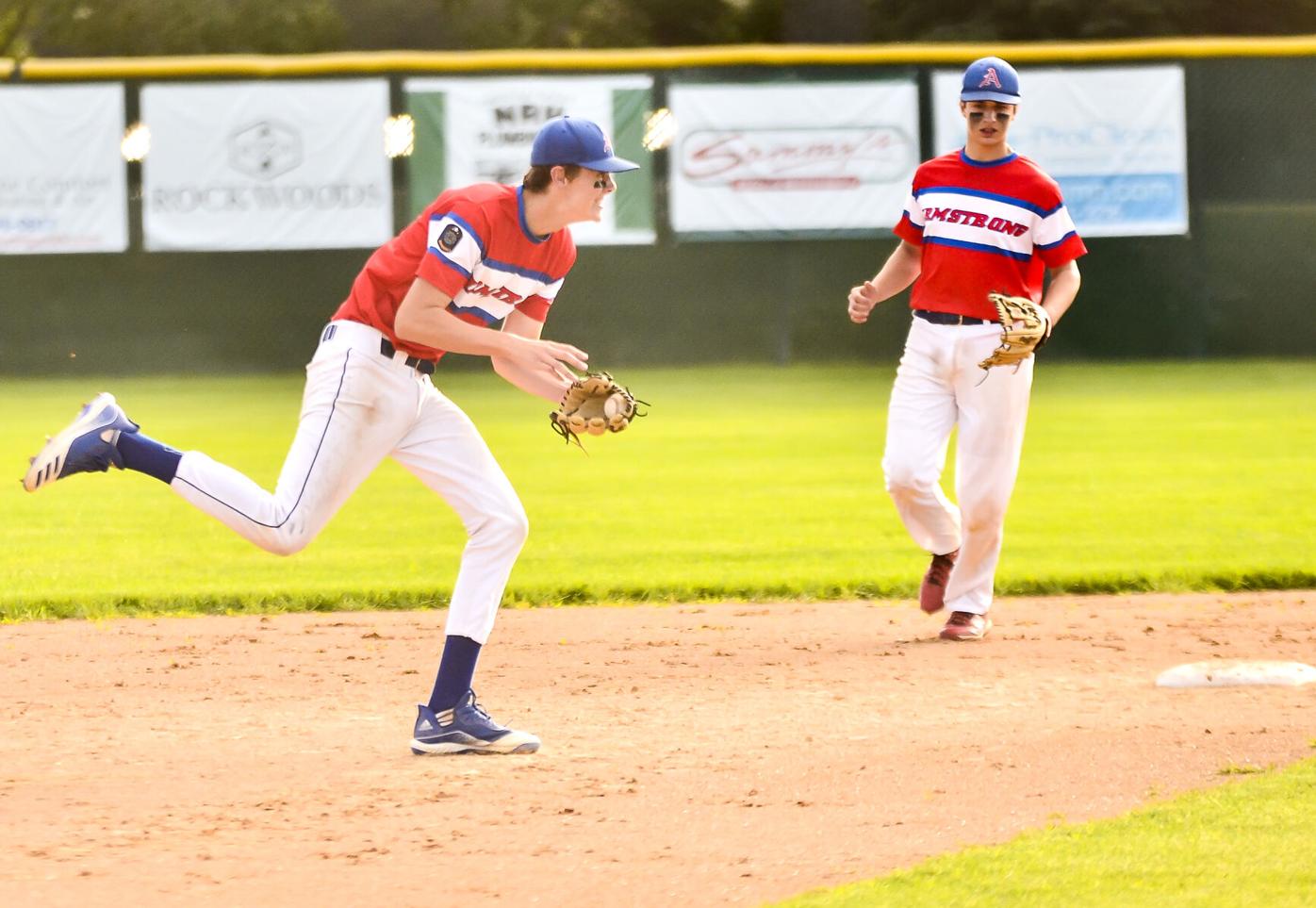 Armstrong's Ryan Wilkinson makes a play at shortstop before throwing to first for the put out as second baseman Brian Roston watches July 8 at Elk River. 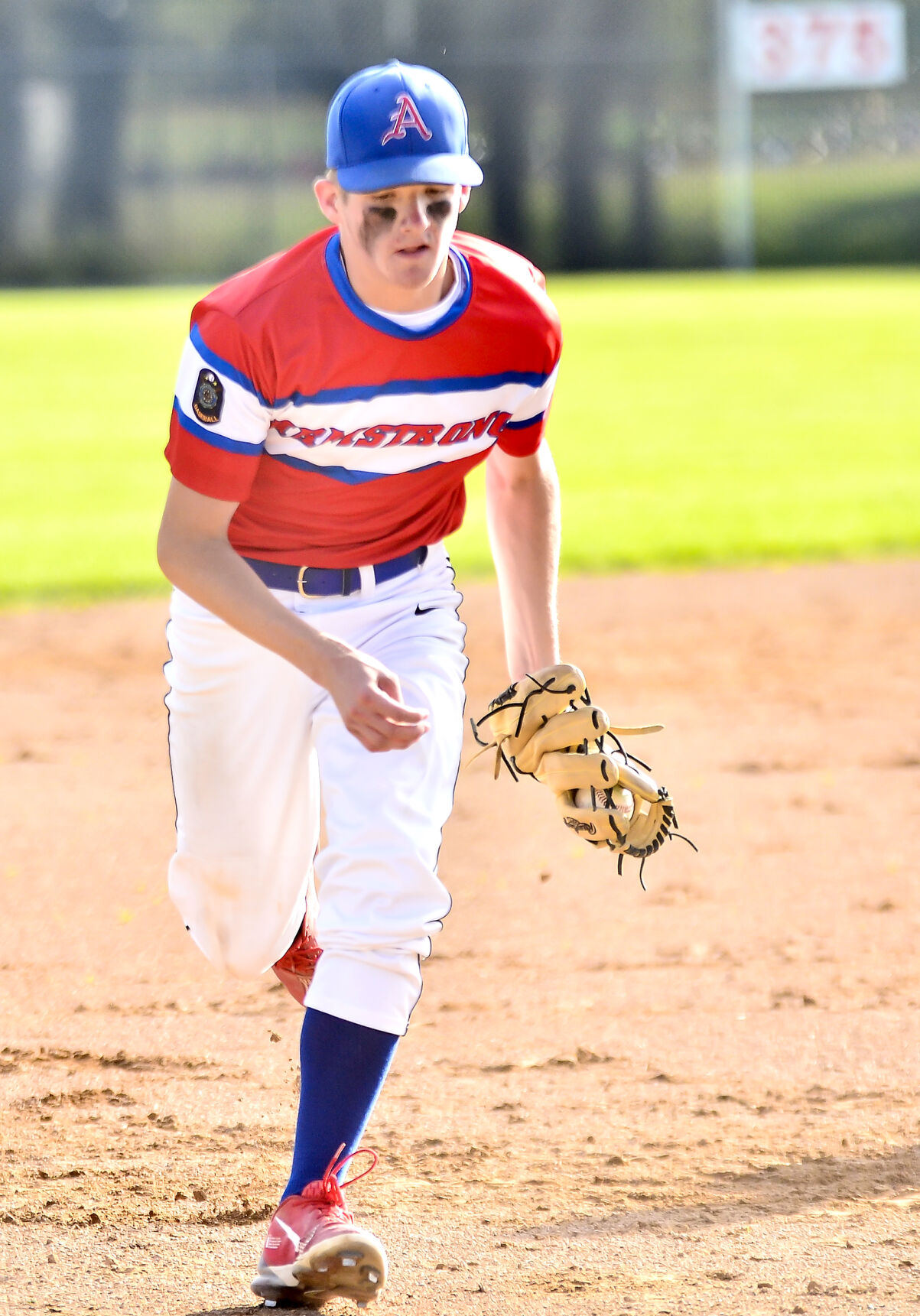 Armstrong's Rilei Reinke runs to step on third base after making a snag on a tough hop in the first inning July 8 at Elk River. 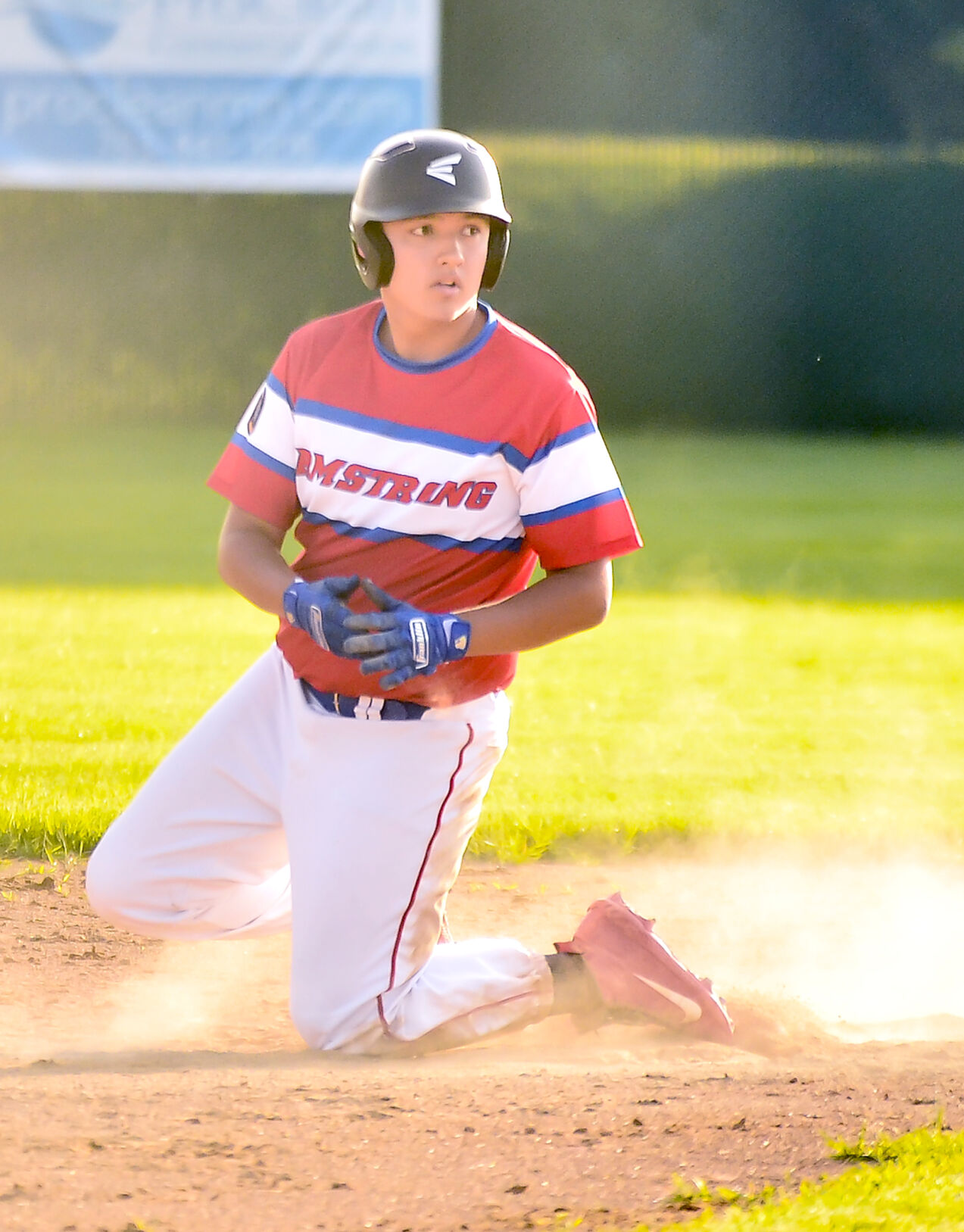 Armstrong's Chris Opatrny looks up after reaching second base in the fifth inning July 8 at Elk River.

Armstrong's Mac Olson throws a pitch in the first inning July 8 at Elk River. Olson went six innings and struck out three in a 3-0 loss.

Armstrong's Ryan Wilkinson makes a play at shortstop before throwing to first for the put out as second baseman Brian Roston watches July 8 at Elk River.

Armstrong's Rilei Reinke runs to step on third base after making a snag on a tough hop in the first inning July 8 at Elk River.

Armstrong's Chris Opatrny looks up after reaching second base in the fifth inning July 8 at Elk River.

Armstrong Legion baseball is gearing up for the playoffs with the last two games of the North Hennepin League season coming on July 13 and 14.

They hosted Anoka on July 13 and Rogers on July 14.

Armstrong plays in the sub-state section 4 with Excelsior 1 and 2, Hopkins, Rogers, St. Louis Park and Wayzata 1 and 2. The tournament is expected to begin the week of July 19 with a site to be announced.

Tuesday was a strange day with a steady rain that transitioned from light to heavy throughout the evening.

While the Minnesota Twins and Chicago White Sox somehow managed to play a full game in very sloppy conditions, those teams have Major League Baseball grounds crew working non-stop to ensure the field conditions were good enough to help with player safety.

The same could not be said for the Armstrong Legion baseball game at Brooklyn Park.

The two teams played a wild four innings with a combined 13 runs, 10 hits and five errors before the game was called.

The Falcons ended up edging the Pirates 7-6 in the difficult conditions in what was essentially a half game.

The Falcons would end up winning the game, however, after they scored twice in the top of the fourth and held the Pirates scoreless in the bottom of the inning.

Keegan Marek opened with a single. Erik Berg reached on an error, and Chris Brey walked to load the bases with no outs.

Brain Roston later reached safely on an error that allowed Brey to score to make it 7-6.

Two reached base with two outs before Ryan Wilkinson was able to strike out Justin Walters to end the game.

Armstrong went up 2-0 in the first. Berg walked, and Brey doubled to put runners on second and third. Campbell then singled to center field to score them both.

The Falcons led 5-0 in the second. Marek, Berg and Brey all walked, and Campbell was hit by a pitch to plate Marek.

The Pirates came back in the bottom of the second to cut the lead to 5-4.

Walters doubled to put two on, and Matt Doebler walked to load the bases. Sam Kil and Drew Paape both had RBI walks, and Dominic Nerby singled home Doebler and Kil.

Brooklyn Park took a one-run lead in the third.

Wilkinson earned the win. He allowed a hit and two walks and struck out two in two innings. Micah Brown allowed five earned runs on four hits and five walks in two innings, striking out two.

The Falcons had a second straight game suspended before completion July 7 with a 5-5 tie against STMA Blue.

Armstrong tied the game at 5-5 in the bottom of the seventh and the game went nine innings before being stopped due to darkness.

After two outs, Matt Levy reached base on an error and later stole second base. Onterrio Moore came up with the clutch RBI double on a 3-2 pitch to tie the game.

No one had a runner reach second base in the eighth and ninth, and with the sunlight gone, the game was called a tie.

The Falcons took a 4-2 lead in the bottom of the fifth, but STMA Blue scored three times in the top of the sixth to take its first lead.

Berg and Marek (2-for-5) singled, and Roston moved the runners over on a groundout. Levy then came through with a 2-run single.

A couple of singles, a walk, an error and two fielder’s choices allowed STMA to come back in the top of the sixth, however.

Marek blasted a two-run home run to also score Berg in the bottom of the first for an early 2-0 lead, but STMA Blue scored runs in the third and fourth to tie the game.

Campbell finished 3-for-4 in the game with a triple but didn’t score. Roston allowed four runs on seven hits and five walks in five innings, striking out three.

Brady Dickson allowed three hits and a walk and struck out one in four innings.

Armstrong threatened to score in a few innings, but the clutch hit never came in a 3-0 loss July 8 at Elk River.

Campbell singled, and Rilei Reinke and Franke both walked to load the bases with no outs in the top of the first.

But Marek struck out, and Roston lined out to third base, which resulted in a double play as Campbell was caught off the bag.

Marek singled and reached second with two outs in the fourth, but Levy struck out to end the threat.

In the fifth, Chris Opatrny worked a full count before walking, and Campbell walked on four pitches to put two on with two outs. But Reinke grounded out to second base to end the threat, nearly beating the throw after a bobble on the play.

Elk River took a 1-0 lead in the bottom of the second as Nathan Buhl scored on a wild pitch.

The Elks added two runs in the bottom of the sixth. Charles Wonser singled and reached second on a sac bunt. Buhl doubled home Wonser, and Waletzko singled home Buhl.

Pitcher Mac Olson did have a strong outing on the mound despite the loss. He went six innings and allowed three runs on seven hits. He struck out three, hit a batter and walked one.

The defense also made several nice plays. There was a rare 1-4-3 putout in the third inning after a liner went off Olson’s glove and right to Roston at second base.

Campbell was solid in center field with a long run to snag down a liner in the left-center field gap and another long run to make a catch on the warning track, both in the third inning.

Jeremy Cisewski also made up for a dropped ball earlier in the game with a nice back-peddling catch on a deep fly ball to left field in the fourth.

Armstrong Legion plays in the sub-state section 4 playoffs starting the week of July 19.

Armstrong Legion baseball: Falcons crush Coon Rapids to get back in win column

Armstrong Legion baseball bounced back after a tough week in the North Hennepin League June 29 with a 12-2 win over Coon Rapids in five innings.