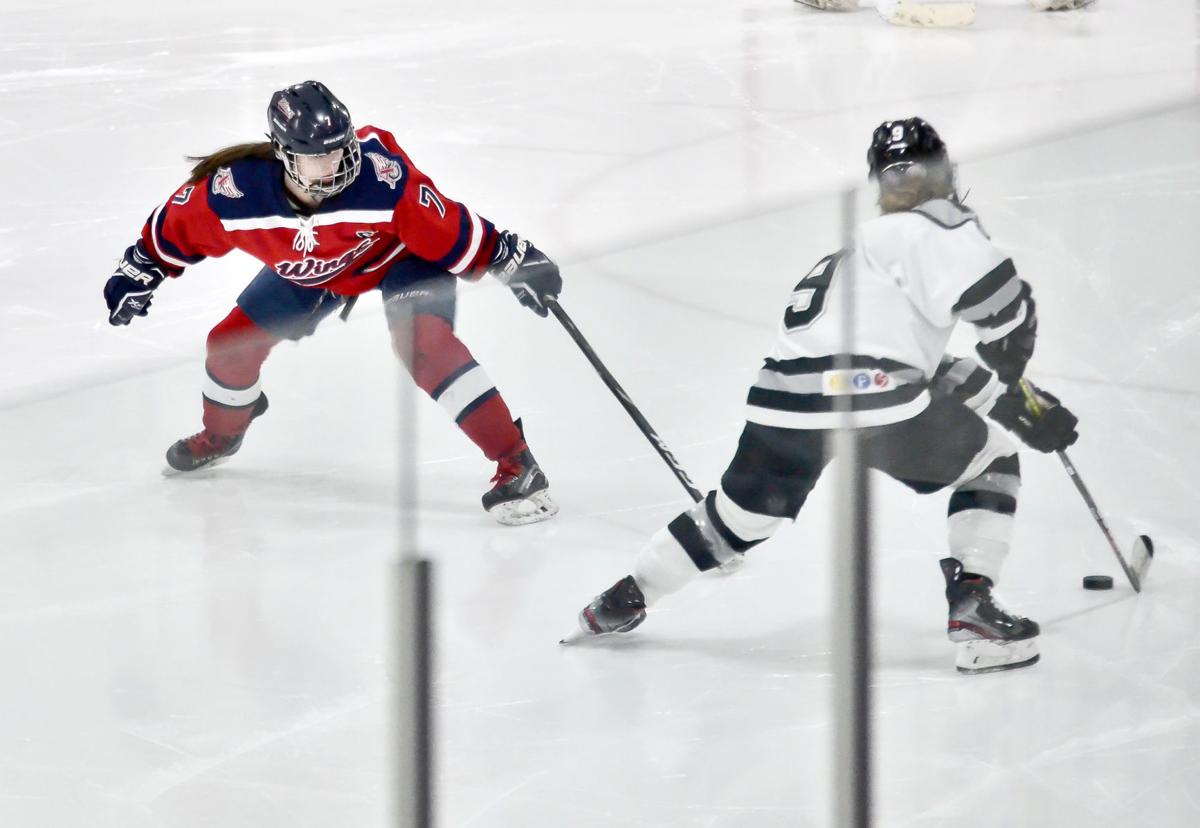 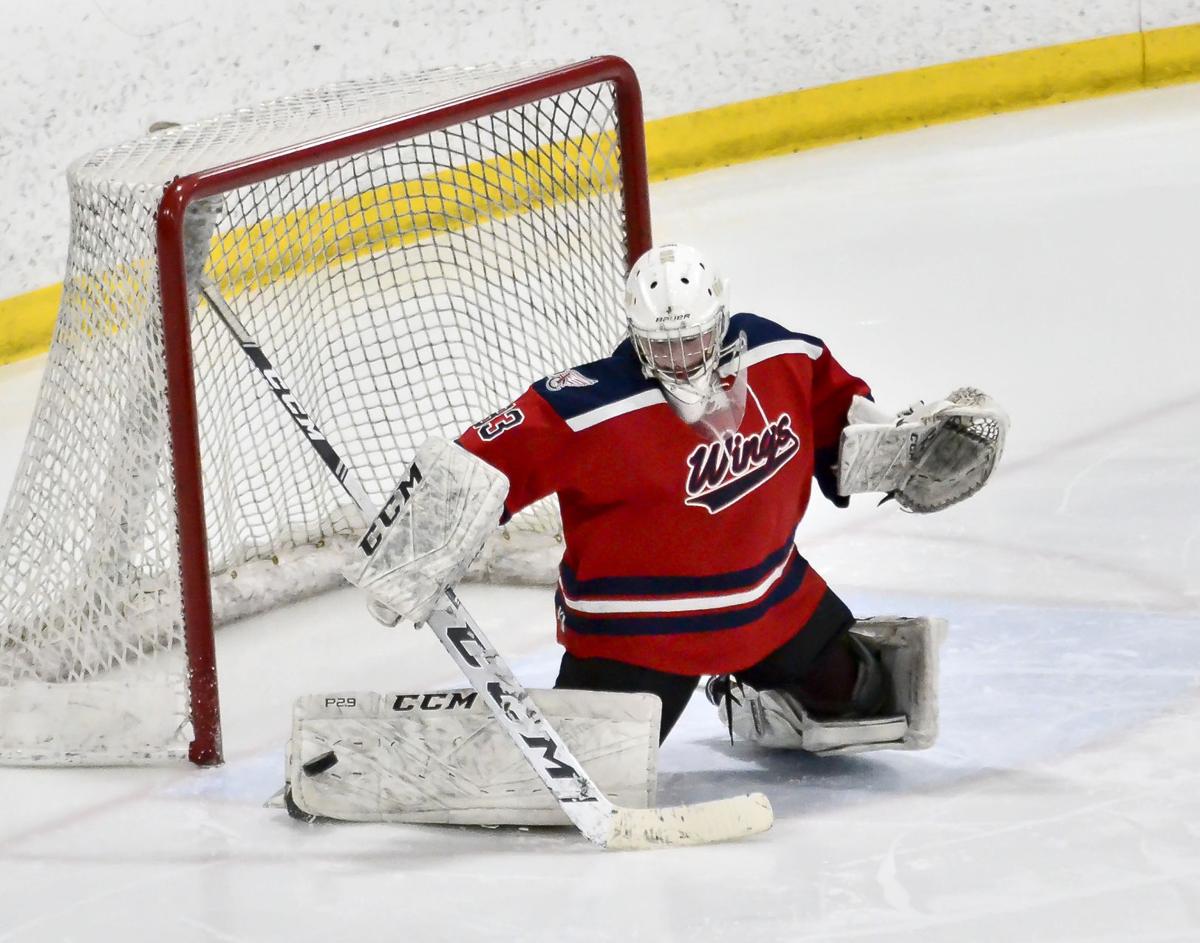 Armstrong/Cooper junior goalie Lindsay Batz makes a pad save in the second period Feb. 4 against fourth-seeded Minneapolis in a 5A section quarterfinal at St. Louis Park Recreation Center. Batz finished with 43 saves as the fifth-seeded Wings fell 4-0. 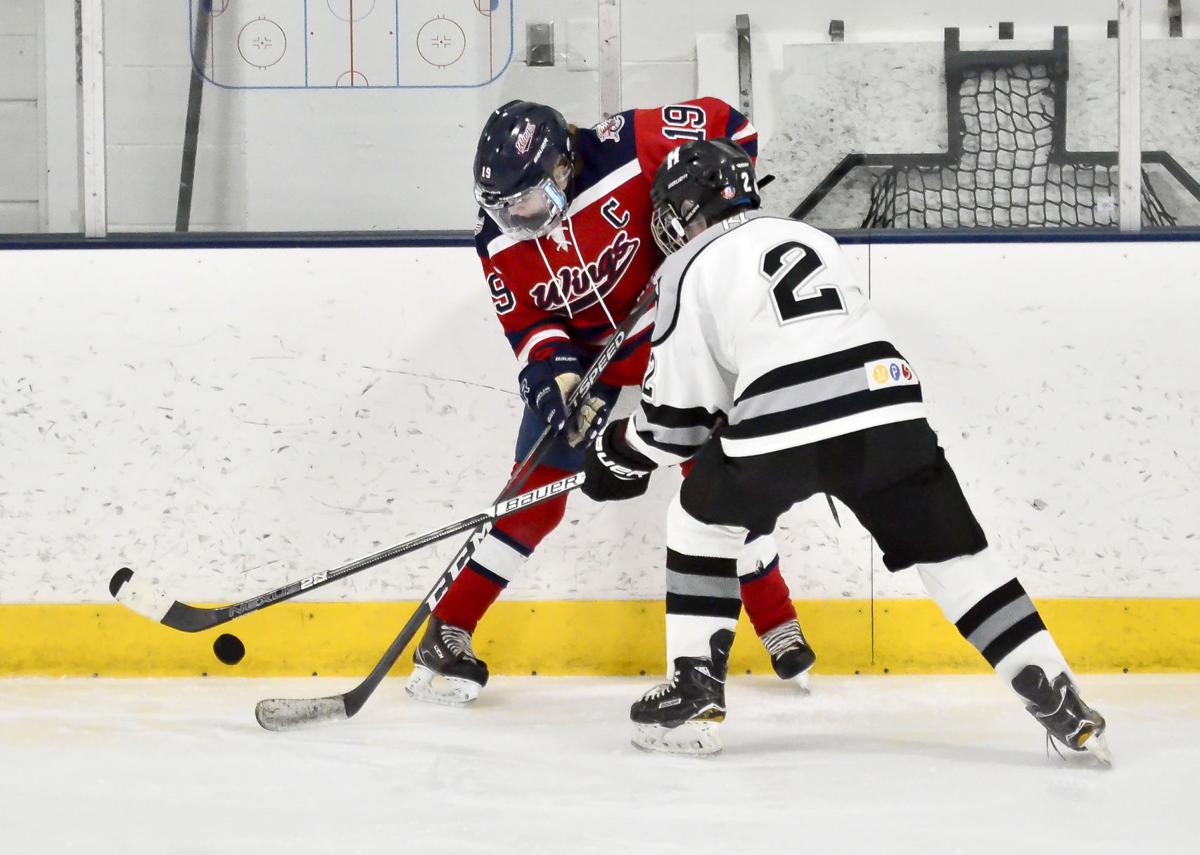 Armstrong/Cooper senior defenseman Hailey Mattson fights for possession along the boards in the second period Feb. 4 against Minneapolis in a 5A section quarterfinal at St. Louis Park Recreation Center.

Armstrong/Cooper junior goalie Lindsay Batz makes a pad save in the second period Feb. 4 against fourth-seeded Minneapolis in a 5A section quarterfinal at St. Louis Park Recreation Center. Batz finished with 43 saves as the fifth-seeded Wings fell 4-0.

Armstrong/Cooper senior defenseman Hailey Mattson fights for possession along the boards in the second period Feb. 4 against Minneapolis in a 5A section quarterfinal at St. Louis Park Recreation Center.

Fifth-seeded Armstrong/Cooper girls hockey had its season come to an end in a 4-0 loss to fourth-seeded Minneapolis co-op Feb. 4 in a 5A section quarterfinal at St. Louis Park Recreation Center.

The Wings (7-18 overall) still had a chance despite a dominant first period by the Storm, where they were outshot 19-2, but in the end, the shots advantage proved to be too much as Minneapolis scored four unanswered goals in the final period.

Junior goalie Lindsay Batz was playing out of her mind before the Storm finally broke through, stopping shot after shot in a variety of ways. If it wasn’t her pad or glove, her stick was able to survive the onslaught.

Batz ended up with 43 saves on 48 shots on goal, with one shot hitting the crossbar, and was able to withstand several one-on-one breakaways.

Batz had 19 saves in the first period alone and added nine more in the second period.

Overall, Minneapolis outshot the Wings 48-15, and the lack of possession was hard to overcome in the end.

“I think they played great,” coach Kelly Crandall said. “It was a team effort, and Lindsay kept us in it as long as she could.”

The puck could not be cleared from the Armstrong/Cooper zone, and Sorock secured the puck and skated in from the right side uncontested before squeaking the puck through Batz for a 1-0 lead.

The Storm struck again with 8:58 to go. Junior forward Augusta Crow was able to just beat Batz after a centering pass from freshman forward Maddy Helmstetter.

The third goal came on a rebound attempt by eighth-grade forward Lizzie Hamel after a difficult sliding pad save by Batz took an unlucky bounce right to Hamel’s stick with a wide-open net.

Helmstetter added a goal after beating everyone for a 1-on-1 with Batz and using a deke to knock the puck past Batz.

Despite that tough ending, Batz played well, especially in the first two periods.

Batz used her stick to stop a shot by junior Julia Stevens early in the first, and she made a one-on-one save against Helmstetter a little later.

Batz used her body and glove to stop another open shot, and she later stopped a 1-on-1 breakaway despite a collision in the crease.

Batz wasn’t the only one keeping the game scoreless though.

Senior defenseman Hailey Mattson had several poke checks as the last defender to beat to take away opportunities. Freshman defenseman Claire Sondrall had a blocked shot and a clear on a penalty kill to stop a breakaway, and eighth-grade defenseman Erin Paloney also had a couple of blocked shots.

Senior defensemen Hannah Johnson and Hannah Schneider also had a few poke checks at center ice that broke some momentum for Minneapolis, especially in the second period when the Wings held the Storm to nine shots.

Armstrong/Cooper couldn’t get much going offensively with just 15 shots, all of which were saved by sophomore goalie Molly Taylor.

Sophomore Paige Loidolt was involved on two shots in the first period. Loidolt tried to score on a redirect, and she found junior forward Libby Plath on a pass late in the first for another shot. Taylor was able to stop Plath’s shot with her pad.

One of the better chances in the second period came on another shot by Plath following a forced turnover at center ice by Sondrall.

Crandall said she was lucky to have great seniors for her first year as head coach for Armstrong/Cooper. She said they helped build a tradition that can help the program in the future.

The Wings’ team included eight girls who are sophomores or younger this season, and the big takeaway for them was learning how to be a good teammate on-and-off the ice, Crandall said.