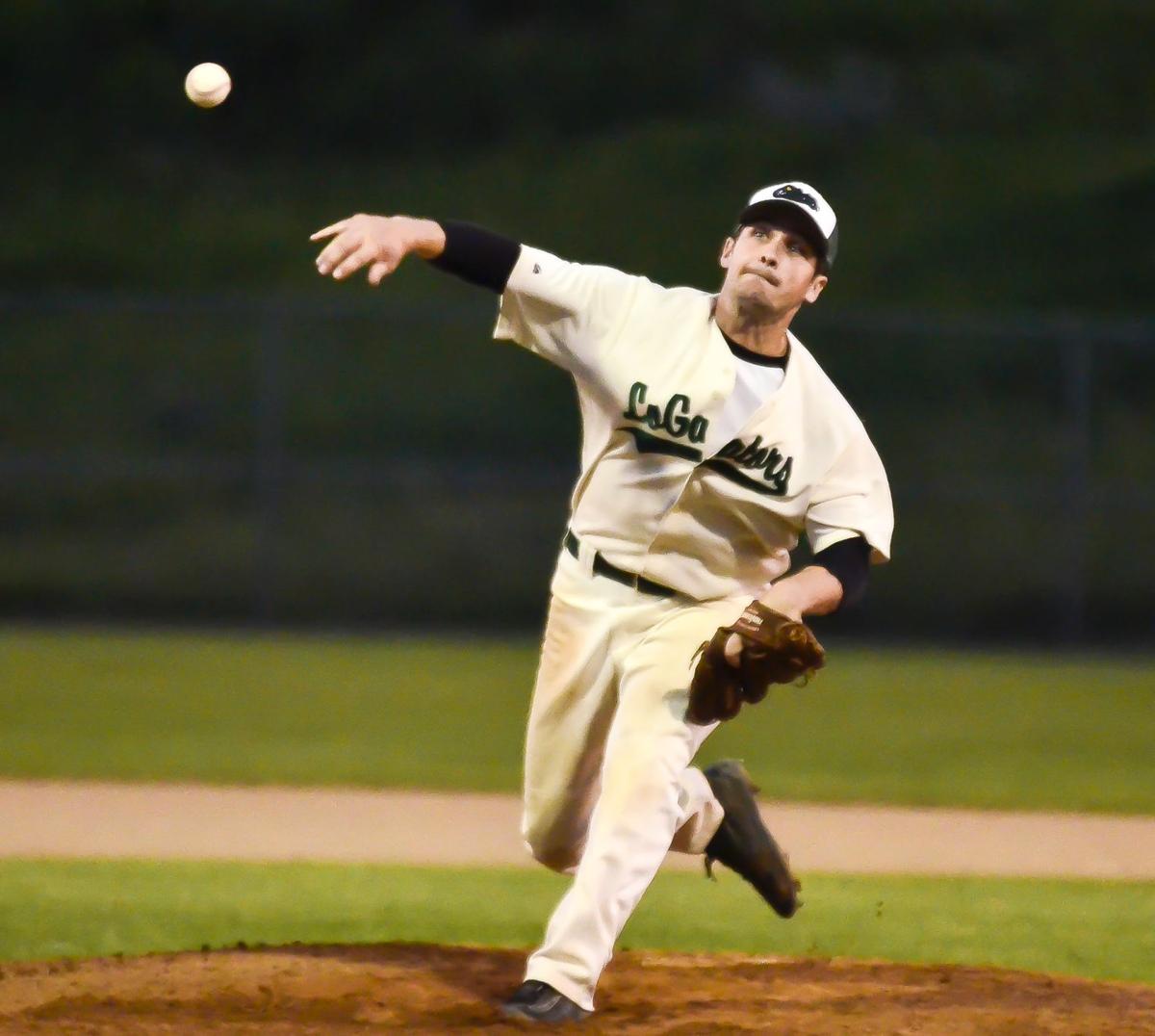 Zach Heckert throws a pitch in a game against Anoka in 2019. Heckert is expected to be one of the top arms for the LoGators in 2020, as the league season is slated to officially begin after a long delay due to the COVID-19 pandemic 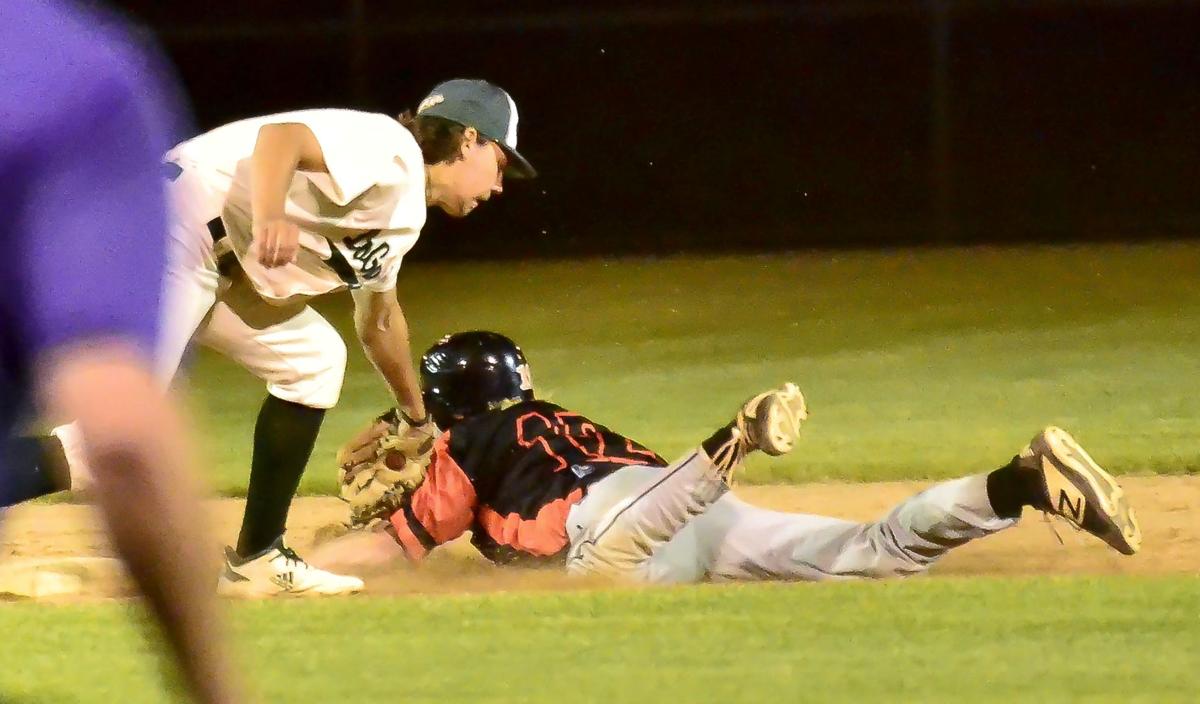 Sam Riola tags out a runner at second base in 2019. Riola is expected to be one of the top hitters in 2020, but he will be slowly implemented on the mound due to the long layoff from the pandemic. 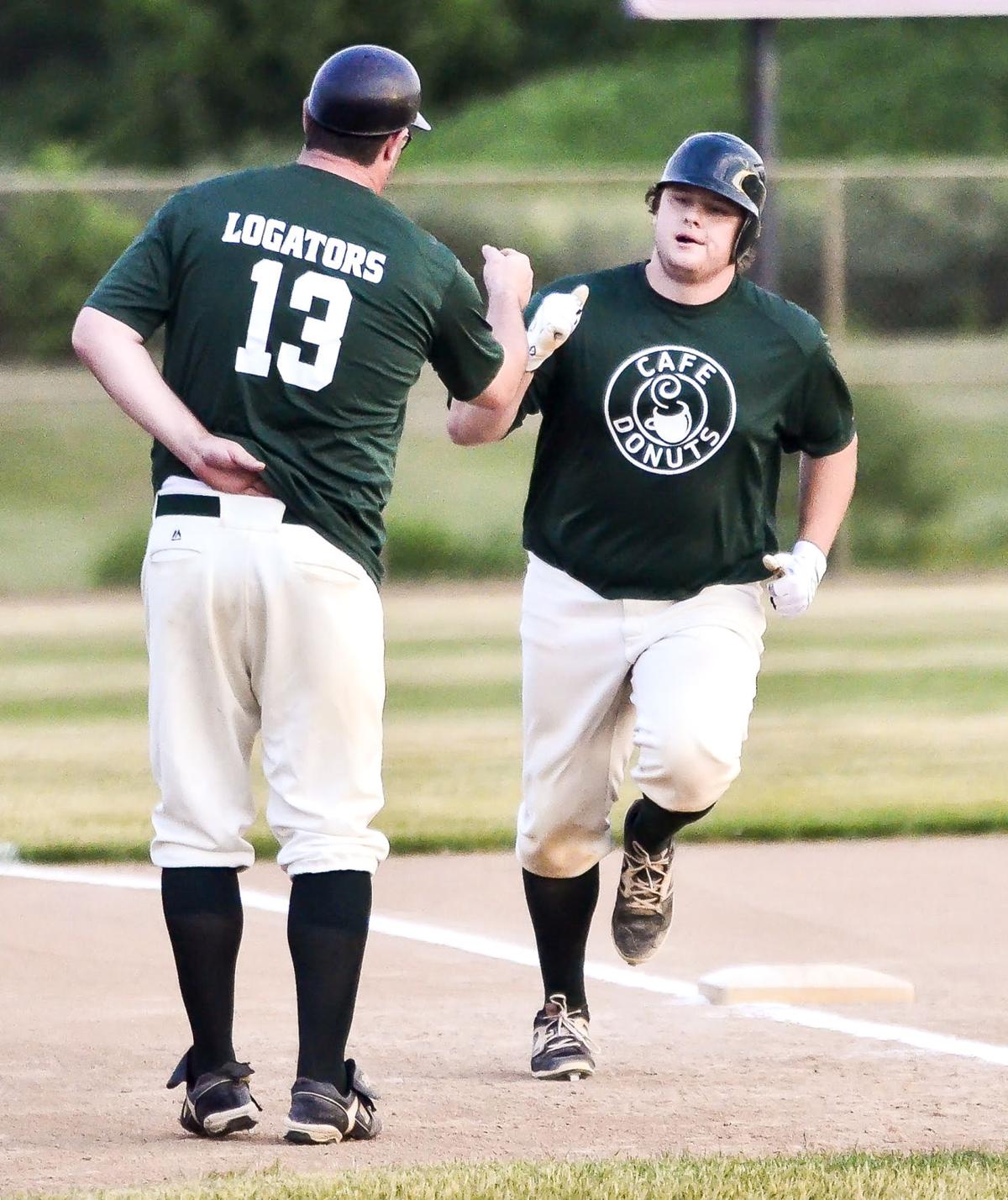 Reid Conlee rounds third base and celebrates a grand slam in a game last season. Conlee is one of several players expected to make an offensive impact in 2020 as the Metro Minny League season begins.

Zach Heckert throws a pitch in a game against Anoka in 2019. Heckert is expected to be one of the top arms for the LoGators in 2020, as the league season is slated to officially begin after a long delay due to the COVID-19 pandemic

Sam Riola tags out a runner at second base in 2019. Riola is expected to be one of the top hitters in 2020, but he will be slowly implemented on the mound due to the long layoff from the pandemic.

Reid Conlee rounds third base and celebrates a grand slam in a game last season. Conlee is one of several players expected to make an offensive impact in 2020 as the Metro Minny League season begins.

Local amateur baseball is back.

After several months of a delayed season due to the COVID-19 pandemic, the Champlin LoGators will begin to play games closer to home.

Gov. Tim Walz and the Minnesota Department of Health announced that youth and amateur sports could begin on June 24, but there was little room for delays. Champlin manager Matt Marek said in April that the Fourth of July weekend was the latest the season could get going.

Marek, who is also the vice president of the Metro Minny League, said he was in constant contact with league president Jeff Lindstrom during the pandemic about updates on the season.

“It seemed like every time we thought something was going to be announced or restrictions might be lifted, it seems like we’ve been wrong,” Marek said. “It was a relief that it was opened up for June 24. Every step of the way, it seems like our assumptions and our intel has been wrong. It’s nice to have a concrete answer and a full green light to go.”

Champlin gets to start its run toward the postseason in the Metro Minny League shortened season. The league season begins at 7:30 p.m. Tuesday, June 30 at Blaine, with the first home game at 7:30 p.m. Wednesday, July 1, against Andover at Noble Sports Park.

There will mostly be league games in July and early August before the postseason and state tournament.

There will be guidelines for teams to follow to help keep players and fans safe. Some of those precautions include no high-fives, hand shakes or celebrations with unnecessary touching, no spitting, keeping social distance as much as possible and promoting social distancing with the spectators.

Marek said that the LoGators usually don’t get more than 50-75 people on a good night, which makes the social distancing aspect easier, as well as the space that Noble Sports Park provides.

Players will also have their own equipment and not share anything, and Champlin players already have their own bats and gloves and gear for the catchers. Some other Minnesota Baseball Association guidelines include allowing umpires to stand behind the catcher or pitcher to remain socially distanced.

“It is really going to be about being smart,” Marek said. “It is all very doable and something we are going to adhere to and make sure we can continue to play.”

There are challenges though. It may not seem like a big deal to some, but celebrations in the dugout after a big hit or run scored, a good defensive play or a strong pitching inning are a huge part of baseball.

So the LoGators have developed an easy way to help discourage those touching celebrations – following the television show recurring gag from ‘Arrested Development’ of screaming out no touching in lieu of high-fives.

“In the last few games, I have just been yelling, no touching, straight out of ‘Arrested Development,’” Marek said. “It’s kind of funny, but at the same time, it kind of reminds us to stay safe and adhere to the guidelines that have been set for us.”

Marek said it is going to be nice not to have to travel two to three hours for a game once league play begins, and that he is glad he won’t have to try and find games or fields to play in.

Minnesota baseball teams were allowed to play games out-of-state starting at the end of May, and the LoGators were 4-2 with wins over the Erskine Comets, Spooner, Watertown and Pierz.

The game against Watertown was the lone one in Minnesota. The others were in North Dakota and Wisconsin.

Champlin added wins against Cokato, Hamel, Nimrod and Vergas to move to 8-2 overall as of June 27.

The LoGators next host Excelsior and Coon Rapids at 7:30 p.m. Tuesday and Wednesday, July 7-8, at Noble Sports Park.

Champlin will be looking to start strong with only five weeks of league play, and the three-game series to make state for Class B will be Aug. 12 and 14-15 with the seeding games on Aug. 16. There won’t be series for seeding like in the past so the regular season can have one extra week.

“It is going to be important to play well right off the bat,” Marek said. “We should have 11 games under our belt before our first league game, so hopefully that scheduling kind of helps us going into the rest of our schedule.”

As of now, there are 28 players on the LoGators’ roster, but only 20 of those players have played in games, as of June 22.

About 14 or 15 players are either active college players or out of high school players, and Marek said it was good to see so many players willing to travel to play non-league games in the past month.

Usually, for one game, Marek said that 13 to 14 players from the roster show up, but with so many college and high school players, he said he expects there to be some overflow down the line and outside the dugout for some games coming up.

And since so many players traveled with the team in the out-of-state portion of the schedule, Marek said it shows that the players are hungry to play.

“Our lineup, we are going to mix it up a lot and try to get as many guys at-bats as we can,” Marek said.

“Reid, Sam and Ethan are really coming to be the heart of our lineup,” Marek said. “We expect them to do a lot of damage from the top of the lineup.”

Jon Koenig has also started out strong at the plate. He is 7-for-14 with three doubles, a triple, four RBIs and seven runs scored.

Koenig is in his second season with Champlin, and he plays club baseball at the University of Minnesota. Marek said Koenig is going to be a big part of the lineup this year.

“He came out of the gates on fire,” Marek said. “He’s definitely put on 15 pounds of good weight, some muscle too. He’s really been swinging the bat well.”

Riola was the main pitcher a year ago, but he had to be in lockdown for several months before play started. So he is limited right now with the hope he can pitch more later in the season.

Zach Heckert, Charlie Hutchinson and Jerry Gooley are expected to be the main arms this season.

Heckert has allowed seven earned runs on 11 hits, three hit batters and eight walks in 13 1/3 innings. He has nine strikeouts. Hutchinson gave up four earned runs on nine hits and 14 walks in 16 2/3 innings, striking out 31.

Gooley has 13 strikeouts and two walks and has allowed two hits in six innings so far, and several other arms are expected to help on the mound.

“Gooley, we hope to get some innings out of him,” Marek said. “He’s kind of a rubber arm, but at the same time, he just had his first game this past Wednesday. I anticipate him throwing a lot of innings. His arm is good. I think he just needs a couple weeks to get that ironed out a little bit.”

Champlin amateur baseball: Hoping to get on the diamond