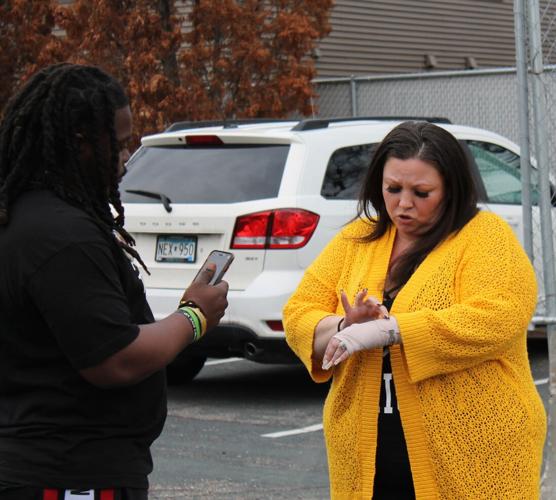 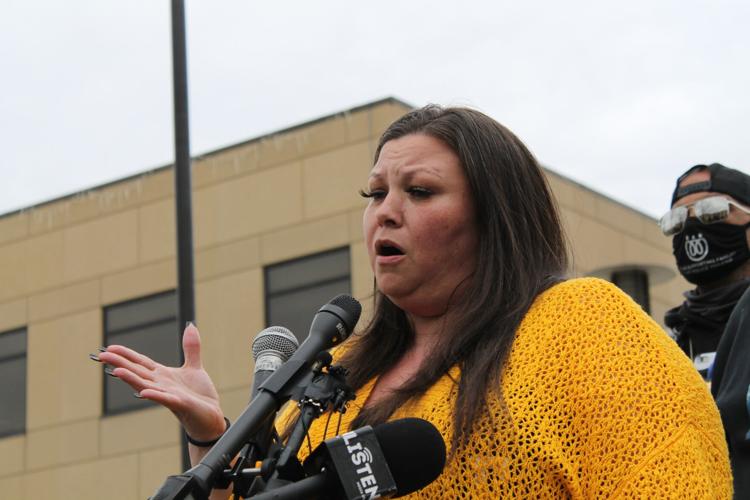 Katie Wright addresses reporters at a press conference in front of the Brooklyn Center Police Department on May 5. 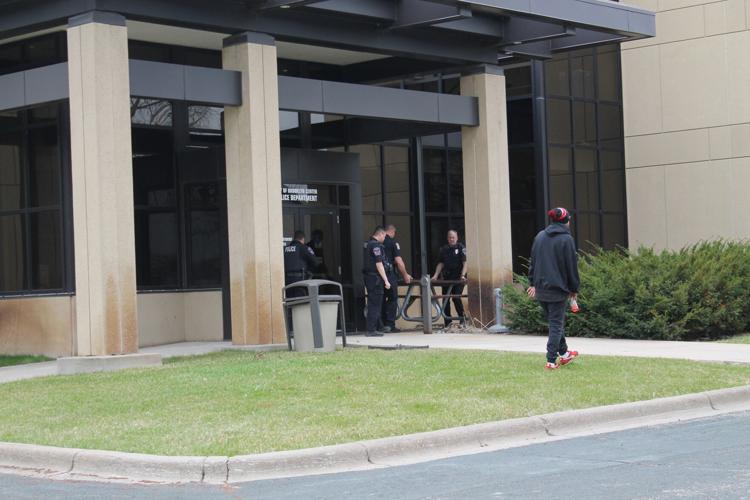 An activist heckles Brooklyn Center Police Officers as they move a picnic table away from the front door of the police station.

Katie Wright addresses reporters at a press conference in front of the Brooklyn Center Police Department on May 5.

An activist heckles Brooklyn Center Police Officers as they move a picnic table away from the front door of the police station.

Katie Wright said an officer injured her wrist and broke her cell phone during the May 4 incident.

The city released body-worn camera footage of the incident shortly after the press conference.

“While assisting another agency on a high-risk stop as part of a homicide investigation, there was an encounter between Katie Wright and Brooklyn Center officers,” a city spokesperson said. “The release of the footage is in an effort to promote public safety and dispel widespread rumor or unrest.”

The police department did not immediately respond to a request for comment on the incident.

Mayor Mike Elliott, who was listed as a speaker for the press conference, did not appear, and has not responded to the Sun Post's request for comment.

According to Wright, the incident occurred at approximately 8 p.m. May 4.

She was traveling northbound on Highway 252 when she saw officers approaching a group of people with weapons drawn in the southbound, she said.

She decided to pull over onto the median and film the interaction.

“It was two young kids, they had to be in their 20s, 25s, to make sure that they got home safe because we know that we have a police problem in Minnesota,” Wright said. “All I was doing was my civic duty to pull over and make sure that those babies got home safe to their families because I don't want what happened to me to happen to any other families.'

Meanwhile, she was using a Bluetooth connection to speak on the phone with Toshira Garraway, the founder of Families Supporting Families Against Police Violence.

As a result, the first three minutes of her video does not contain any audio. The video appears to have been shot in the northbound lane of Highway 252 near the intersection with 66th Avenue. A Holiday Gas Station and netting from Top Golf appear in the background of the video.

Wright's footage appears to show an officer cross the highway, jump a median, and approach her, before the camera loses focus.

“He walked up to me and told me I was going to jail, that I was under arrest for obstruction of justice, he took my phone out of my hand, put it on the roof of my car, he broke my phone, and he grabbed me by my wrist to pull me out of my car, and put my one hand behind my back,” Wright said. “Before he got my other hand behind my back I told him who I was. At that moment, he said, oh, you're Katie Wright, he let me go and said oh, I'm sending you a ticket.”

Wright said the went to hospital following the incident to treat her injury.

Community activist Cortez Rice, whose son Jahmari Rice was fatally shot in Richfield outside of South Education Center in February, said that Wright's wrist was “fractured and sprained” in the incident.

Activists and members of the Wright family, as well as Elliott spent time at the police station after the incident, Rice said.

Wright asked that the officer involved in the incident be fired.

She said she had viewed the officer's body-worn camera footage at City Hall with City Manager Reggie Edwards and Elliott.

“My hand is OK, it's sore,” said Wright, whose wrist was wrapped with medical bandage wrap.

Chuck Valleau, president of the union representing the rank and file officers in the Brooklyn Center Police Department, thanked the officer involved in the incident for his "professional response and restraint," in a statement. "I sympathize with the Wright family for their loss, but it does not give them free reign to stalk, harass, or threaten any of our officers just because they are wearing a uniform. Our officers continue to come to work and bravely fight an impossible rise in violent crime in our city. We thank the residents of Brooklyn Center and others who continue to support us in our effort to keep Brooklyn Center safe."

Prior to the press conference, activists placed a picnic table, trash can and ash tray in front of the police station's front door while the rap song “F- the police” by NWA played loudly in a nearby car.

Officers later exited the station and removed the barricades.

A brief incident occurred between activists and a group of officers along Humboldt as the press conference concluded, where fencing still separates the station from the roadway. Activists appeared to shake the fencing and were approached by officers. The incident ended shortly after.

“At this point, the community's back is up against a wall,” Garraway said. “We have begged, we have pleaded, we have done everything.”

According to a city spokesperson, at 8:11 p.m., Brooklyn Center officers were requested to assist another agency in a high-risk traffic stop related to a homicide investigation.

Arriving officers saw a vehicle parked on the side of the road, and an officer motioned for the vehicle to continue driving.

One of the individuals being detained told officers they did not want to be filmed, according to the city.

The city released a one-minute, 17 second segment of the body-worn camera footage from the incident.

An officer puts an individual, whose face is blured out, into a squad car before turning to look across the highway.

“She's getting a ticket,” he says.

The officer crosses the highway and approaches Wright.

“I need your driver's license,” he says.

The audio is at times muffled by traffic noise, wind, and other ambient audio.

“I'm not giving you my driver's license,” Wright responds.

“You're giving me your driver's license or I'm going to take you to jail for obstruction, you're driving a vehicle,” the officer says.

He then grabs Wright by the wrist, throws her phone on the car and pulls her out of the vehicle.

“You know who I am right? My name is Katie Wright and you guys killed my son and I'm going to video tape it, and if you take me to jail, I'm going to sue you,” Wright says.

After crosstalk between the two, “I'll send you a ticket in the mail,” the officer says before beginning to walk away. “Then I'm going to send you another one, I will, I sure will.”

Copyright © 2022 at Sun Newspapers/ APG Media of East Central Minnesota. Digital dissemination of this content without prior written consent is a violation of federal law and may be subject to legal action.