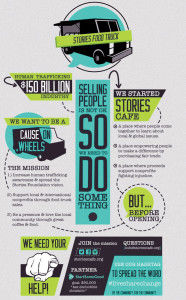 The Stories Foundation flyer, explaining their mission and goals for the food truck and cafe. (Submitted image)

The Stories Foundation flyer, explaining their mission and goals for the food truck and cafe. (Submitted image)

Everyone has a story, and anyone can help others to change their story, even if that includes the bondage of human trafficking.

That’s the goal of the Brooklyn Park-based Stories Foundation, which is conducting a month-long campaign to raise at least $30,000. The funds will fund the launch of the Stories food truck, as a way to educate and mobilize community members to help human trafficking victims change their lives and their story.

Stephanie Page, of New Brighton, is the executive director of the foundation, which has until April 21 to raise the funds. The expectation is that the truck will launch in June and move about to community events and summer festivals in communities in the northwest metro area. The proceeds from the food and drink sales will be donated to organizations around the country and the world that help human trafficking victims.

Eventually, the foundation’s goal is a brick-and-mortar building, a community café in Brooklyn Park where people can get good food, feel a sense of community and gather information on how they can help in the fight against trafficking, Page said.

“Our idea is really big,” she explained. “We are starting with a food truck. People will get good food and support a good cause.”

The project is modeled after the Ebenezer Coffeehouse in Washington, D.C., which is run by a church and is a block from Union Station. Proceeds from the coffeehouse go to local and international mission projects.

The Stories foundation dates to 2012, when the members read the book “Passport through Darkness” and learned about the realities of human trafficking.

“It really is in our backyard,” Thurston said. “People don’t want to talk about it.”

Statistics from the Polaris Project and the National Human Trafficking Resource Center show the Twin Cities as the second most active place in the country for child sex trafficking. Minnesota is the 13th most active state in child trafficking.

There are more slaves in the world now than ever, says Jessie Szmanda, who lives in East Bethel and is secretary of the Stories board. Estimates are that there are between 27 and 30 million people in the world in some type of modern-day slavery, which doesn’t necessarily look like the slavery in the history books. The human trafficking industry is big business, estimated at $150 billion per year worldwide.

Some 21 million people are in some type of labor slavery, where they are often made to work for little or no pay, That includes children and immigrants sold into slavery and working to pick coffee beans, cocoa pods, working in the fishing industry and making clothing in factories around the world. The United States drives the garment industry slavery, Szmanda said, because Americans buy so much clothing.

An estimated 6 to 9 million people around the world are trapped in sex trafficking, including children as young as 3 years old in Thailand. Some of the board members have visited the Tamar Center shelter in Pattaya, Thailand, a city rated by human trafficking organizations as the second most visited place the world for people who participate in the sex trade. The shelters helps the children, both boys and girls, who are rescued from sex slavery.

Human trafficking can be an overwhelming topic for people, and the group wants to give people something they can do to help victims, says Laura Roland, who lives in Anoka and is Page’s sister and Thurston’s daughter. “Everyone buys coffee and eats food,” she said. “Why not redirect your dollars to make a difference. Food from our food truck is a tangible way to help.”

The goal is for the food served from the truck to be simple, with salads, sandwiches and wraps, and coffee and breakfast items. The board members want to serve real food from real farms and keep it local. They want the specials and food items to raise awareness about where human trafficking happens. The awareness effort will include statistics and information on the cups and napkins used to serve the food. The expectation is that volunteers will staff the food truck.

In her role as executive director, Page has been speaking to groups at churches, colleges, schools, organizations and nonprofits, talking about the impact of sex abuse and pornography on society’s collective conscience. Watching visual images of sex changes how a person sees others, lessens the value of others, and leads to sex trafficking, she said.

“Sex is viewed as a commodity,” she said. “People are seen, not as people, but as something to be traded.”

The foundation is reaching out to those passionate about social justice and wants to partner with corporate sponsors and organizations, Page said.

“It will take all of us doing our small part to make this big thing happen,” she said.

Ultimately, the foundation’s goal is to have more cafés around the area, says board member and Brooklyn Park resident John Nargan. The group’s call is to get started, and the food truck is a lower cost option. “It is more realistic to raise $30,000 than $3 million,” he said. “This is our starting spot.”

The work isn’t about profit, or even meeting the victims that the food truck and community café will help, Thurston said, Rather it is about changing lives and communities for the better. “We want to change people’s stories, from a bad one to a good one,” he said.

For more about the Stories Foundation, visit storiescafe.org, or on Facebook at facebook.com/ChangeAStory or visiting the fund raising campaign at startsomegood.com/stories-in-a-truck.