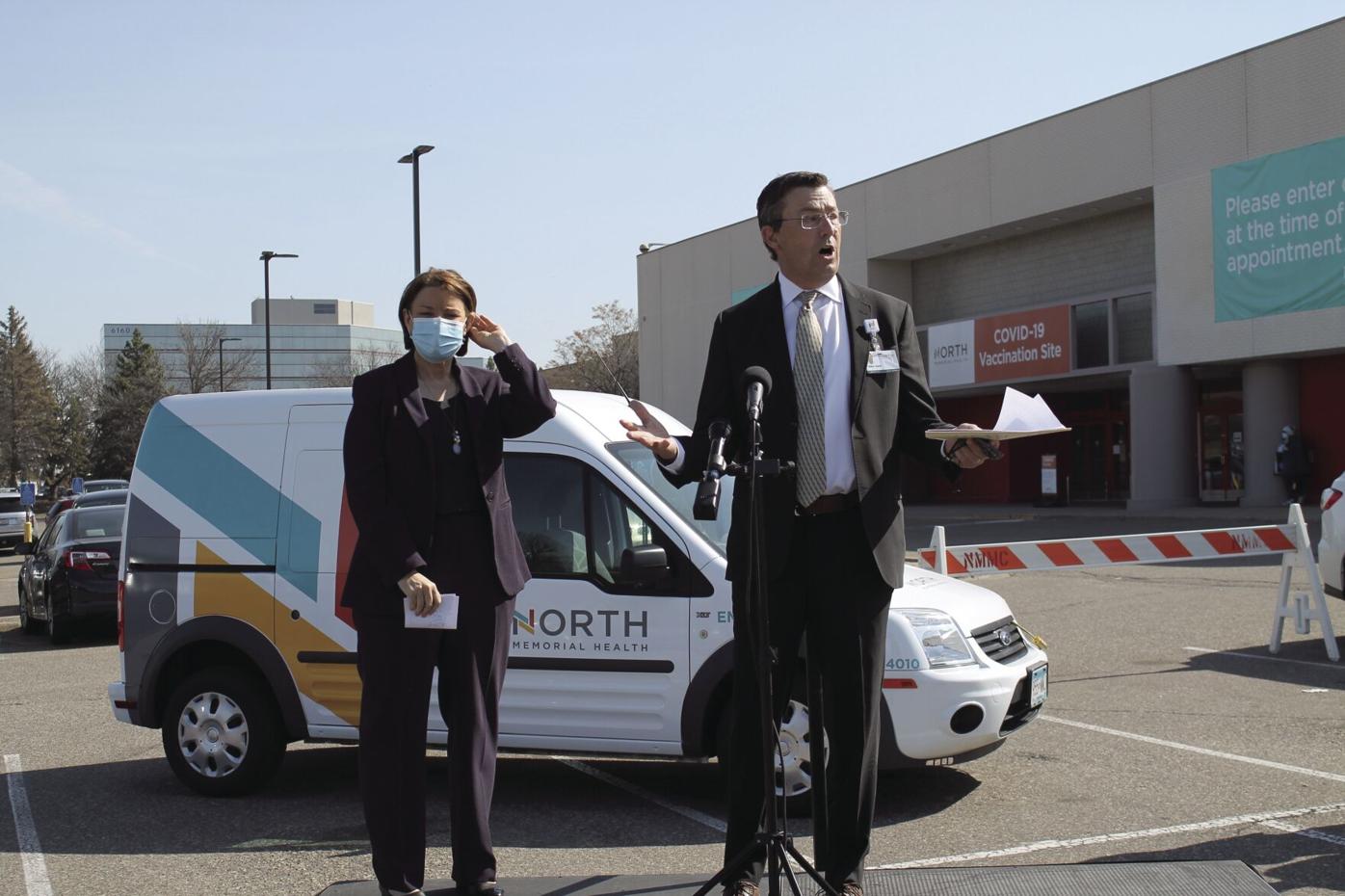 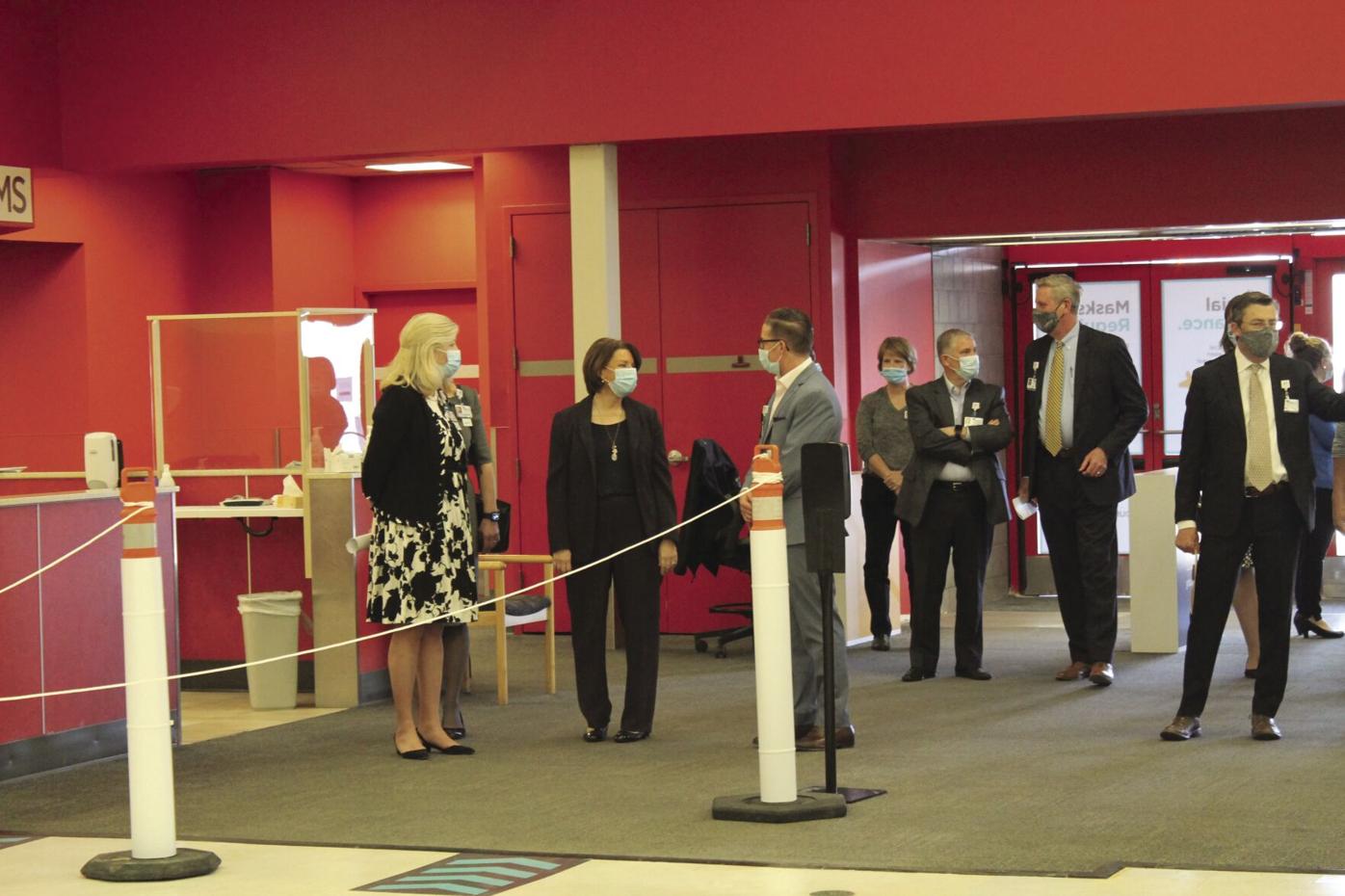 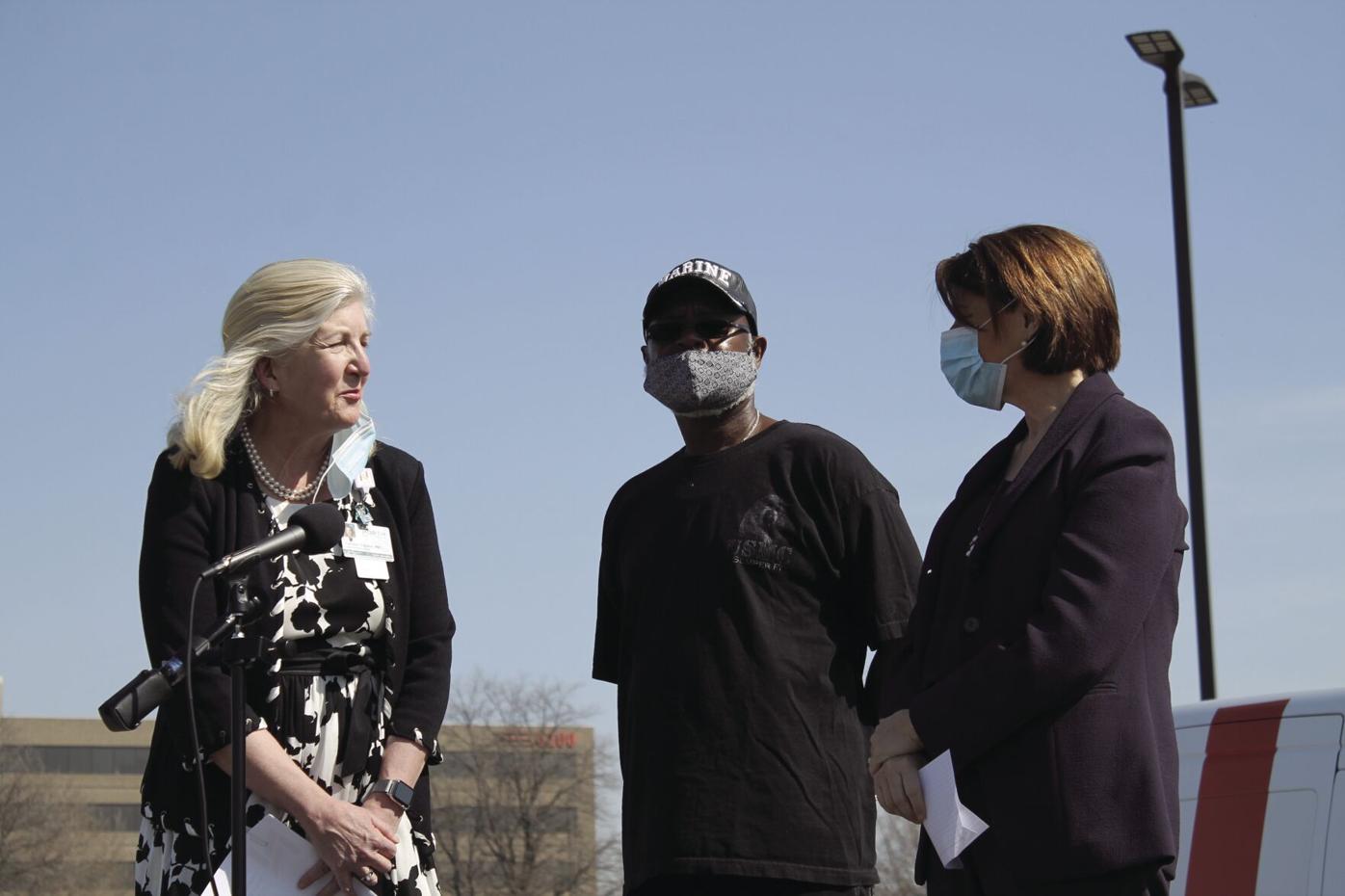 Sen. Amy Klobuchar speaks at the North Memorial vaccine distribution center at 6100 Shingle Creek Crossing. As of April 5, more than 30,000 people have been vaccinated at the site, formerly a Target store.

Under any circumstances, navigating the process to get a vaccine can be challenging, she said. “It’s not easy for people,” she said.

“This hospital and this vaccination site have been really, really focused on making sure we vaccinate everyone, not just some people, not just the people that are able to navigate every website and have the time to do that,” she said.

“There’s a lot of other hard-working people that are just going to work every day, that maybe get on the bus every day. An in fact, this site is right by a Metro (Transit) bus site, and that’s a lot of this story, is finding vaccination sites that work for the people, not just work for some kind of a computer, website where you want to locate everything.”

The $1.9 trillion American Rescue Plan Act, which Klobuchar supported and was signed into law by President Joe Biden last month, provides funding for vaccine distribution, and COVID-19 testing, among many other provisions.

“The federal government’s part in this, as you know, has been crucial,” Klobuchar said. “We just passed the America Rescue Plan, which came following something we did at the end of the year, at the very end of the year, and those major, major pieces of legislation are helping to fund vaccine sites like this. Billions of dollars have been put into vaccine distribution because we understand that a vaccine isn’t just going to suddenly parachute in the middle of north Minneapolis or in the middle of Robbinsdale.”

Vaccine sites like the North Memorial location are important in reaching undeserved populations because residents “may want a vaccine but it’s just hard to do it in their daily lives,” Klobuchar said. “They have a lot going on. We know how hard it’s been for parents balancing their toddlers on their knees and their laptops on their desks, or trying to fill in and work several jobs while their kid’s at home, teaching their kids how to use the mute button in first grade.

“And then you’ve got people who have been lonely, who have been alone during this whole thing, who it’s hard to even think about starting to get out again and going to get a vaccine. You have people of color, particularly in the African American community who have had bad historical experiences with vaccines and being told one thing and it’s just not true.”

Klobuchar moved to assuage any concerns about the vaccine’s safety. “We know this vaccine is safe. We know that the vast majority of doctors and nurses are getting this vaccine, and we’re proud of what’s been going on in Minnesota in terms of the numbers,” she said.

North Memorial patient Curtis Simmons, a resident of Creekside Gables in Brooklyn Park, said that after receiving the vaccine, he’ll be able to visit his granddaughter’s graduation in Louisiana. “I’m happy that I was able to get this shot before I did my traveling,” he said.