An artist’s rendering of the 54-unit apartment complex that JO Companies is planning to develop at 61st Avenue and Brooklyn Boulevard. 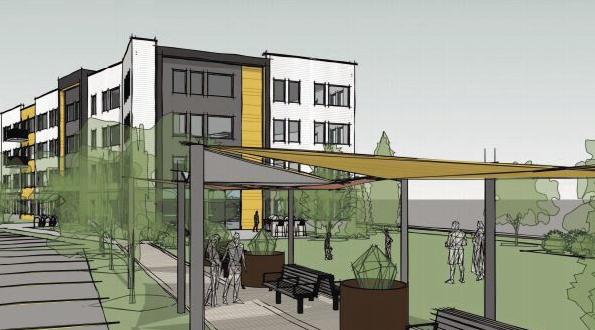 A digital rendering of the connection proposed between Wangstad Park and the apartment complex at 61st Avenue North and Brooklyn Boulevard. 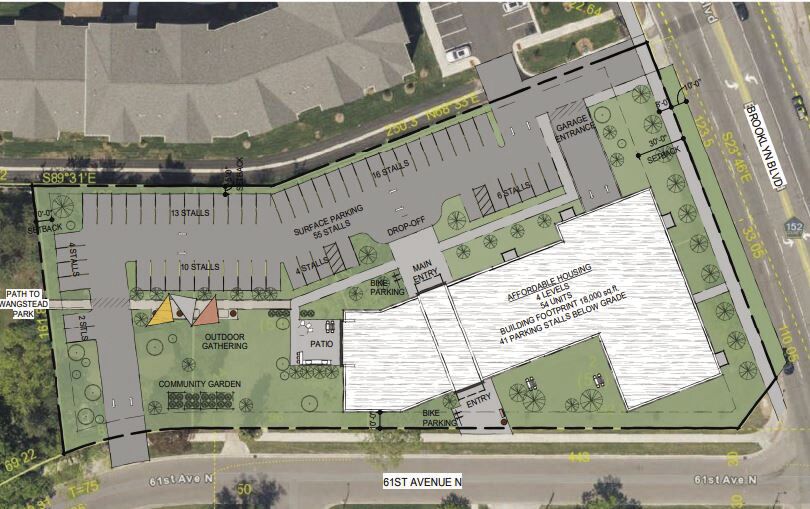 The overhead site plan for the affordable housing development planned for the city-owned plots of land at Brooklyn Boulevard and 61st Avenue North.

An artist’s rendering of the 54-unit apartment complex that JO Companies is planning to develop at 61st Avenue and Brooklyn Boulevard.

A digital rendering of the connection proposed between Wangstad Park and the apartment complex at 61st Avenue North and Brooklyn Boulevard.

The overhead site plan for the affordable housing development planned for the city-owned plots of land at Brooklyn Boulevard and 61st Avenue North.

A developer interested in constructing an affordable housing complex at 61st Avenue and Brooklyn Boulevard is scaling back the overall size of the development in an effort to leverage public funding and state tax credits.

Brooklyn Center has a preliminary development agreement with JO Companies for the project, which is set to expire Feb. 28, 2022.

While the developer has not submitted a formal application to build on the city-owned 1.79 acre site, the preliminary development agreement gives the developer access to the site while formulating a proposal.

In the initial concept, the unit mix in the building had on emphasis on three-bedroom units, with rents affordable to families making 50-60% of the area median income.

As plans have moved forward and the developer has retained consulting groups to assist in the project, the complex has shrunk to 54 units, with a mix of 13 one-bedroom, 27 two-bedroom, and 14 three-bedroom units.

The reduction in size is part of an effort to apply for tax credits from the Minnesota Housing Finance Agency. The tax credits required to make the project financially feasible are typically awarded to projects with 40-60 units rather than the larger 88-unit initial proposal, Opara said.

“It made sense that probably the best route would be to apply for 9% tax credits, so with that being said, in order for us to align competitively, typically 9% deals are between 40 and 60 units,” he said. “In order to align with that, we had to reduce our scale.”

The agency grants tax credits on a competitive basis, with one set of scoring criteria based on the cost of construction per unit. Larger three-bedroom units are more costly to construct, and a focus on these units would make the project less likely to receive the tax credits and be financially feasible.

In a final effort to realize the state tax credits, 10 of the complex’s 13 one-bedroom units will be set aside for supportive housing for the high-priority homeless population and individuals with disabilities. The inclusion of supported units increases the likelihood of receiving tax credits, according to Opara.

In addition to tax credits, the city would likely need to contribute tax increment financing and a land write-off for the project to be financially viable.

The complex, which is still proposed at four stories in height, would not outwardly express itself as affordable housing, but the overall design will read as a market-rate project, said Joseph Kimbrell, senior job captain with Pope Architects.

With a smaller building footprint than was previously discussed, the new design will have additional space for outdoor amenities. Designers are exploring ways to connect the property with the nearby Wangstad Park, which sits to the west of the property.

The park is “obviously a great benefit to have with this housing project,” Kimbrell said. “One of our key moves is to really focus on this connection to Wangstad Park and our community space and our community outdoor space.”

The building’s community room would be located on the corner of the building closest to the park, and an outdoor community patio will be connected to community room. Architects are designing a “procession of different experiences,” Kimbrell said, with residents walking through on their way from the patio to the park.

“We actually looked at a lot of textile art from some of the communities that are represented in Brooklyn Center and that’s where some of these design ideas came from,” he said. “We really love the idea of partnering with a local artist to help with some of the patterning and geometric design of how some of that comes together.”

The council remained supportive of the proposal. While not speaking directly about the project, Mayor Mike Elliott lamented the high cost of housing for the city’s struggling residents.

“I do want to thank you for the work that you’re doing,” he said. “I think that you’re really working to try and create something that’s going to be very helpful in terms of housing people at affordable rates, which is still very costly, but through no fault of your own. This is just the market that we’re in.”

“I like the idea of you being able to work with someone around art,” Councilmember April Graves said. “I really appreciate your diligent work.”

Councilmember Dan Ryan welcomed the reduction in units, saying that some residents in the nearby neighborhood were concerned about the scale of the project. He called the new proposal “more acceptable” to the neighborhood.