Frankie’s Pizza which previously gained most of its business from delivery and take-out has nearly quadrupled in size to allow customers to have a sit-down meal with family or friends. The dining room seats 143 individuals. (Sun Post staff photo by Gina Purcell) 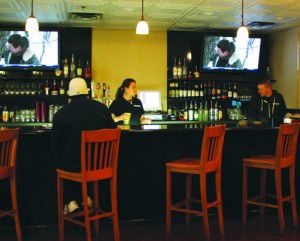 Frankie’s Pizza which previously gained most of its business from delivery and take-out has nearly quadrupled in size to allow customers to have a sit-down meal with family or friends. The dining room seats 143 individuals. (Sun Post staff photo by Gina Purcell)

Frankie’s had previously offered a handful of tables since its incorporation in 1991. Most of its business came from delivery and take-out.

What was once occupying one bay in the shopping center now occupies three – nearly four times the floor space, according to General Manager Kent Garbers.

Now, after roughly a year of renovations, the facility includes a full bar and a 143-seat dining room.

A banquet room that holds 50 guests features a projector and drop-down screen for presentations.

“With our banquet room we’ll be more involved with groups,” Garbers said. “It’s nice to be able to offer that facility.”

Although the dining room is still missing photos and other décor, Garbers plans to keep the style similar to its previous design.

“We’re going for a classic neighborhood bar feel I would say,” Garbers said. “Something kind of comfortable that you can bring your family to.”

While all of the customer’s favorites will remain on the menu – Chicago style pizza, Vienna hot dogs and unique sandwiches – Garbers has started and will continue to expand the menu as well adding appetizers, pastas and eventually steaks. A corned beef and cabbage dinner has also been added to the menu.

Everything on the menu is made in-house.

“We’ve added a lot of new items and will continue to do so over the next months,” he said.

Frankie’s currently has daily specials, which include a pizza deal as well as either a pasta, chicken or rib special.

The expansion was a long-time coming according to New Hope City Council member John Elder.

“The end-product was worth the wait,” he said.

As a council member, Elder said he believes it is important that he supports area businesses.

“I really believe that my job as Councilman is to support and do anything I can for these New Hope businesses,” he said. “It’s so important that our businesses do well.”

Frankie’s is unique in that it is the only pizzeria in the city that provides a full-service dining experience, which is what led Garbers to expand.

“There was a lack of a neighborhood restaurant in the area,” Garbers said.

Having been in business since 1991 Frankie’s has gained a number of regulars over the years.

Garbers says it has been exciting to see the reactions of customers – who over the years have become friends – as they have been witness to the progress.

“It provides people a really nice opportunity to have the Chicago- style food and have somewhere to sit down and to do it in a hometown feel,” Elder said. “It’s somewhere you can go where you can be comfortable. That’s what so many people look for.”

With 25 years experience in the restaurant business – many of which were spent working at Frankie’s – Garbers is no stranger to New Hope.

According to Elder, he is a valuable community member.

“He doesn’t even live in New Hope, but New Hope is his home,” Elder said. “He’s just one of those really unique people that cares about the community.”

Garbers has no plans to leave his “home” of New Hope any time soon.

“I hope we continue to be a long member of this community and keep growing,” he said. “It’s been fun being a part of New Hope.”