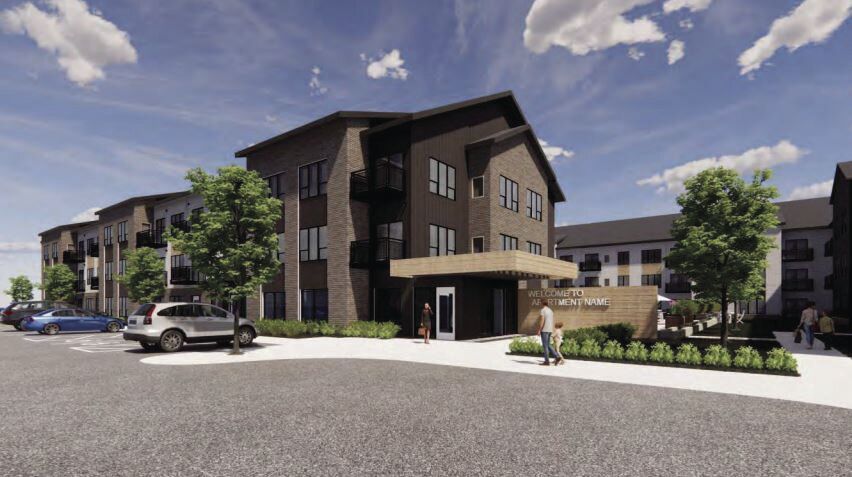 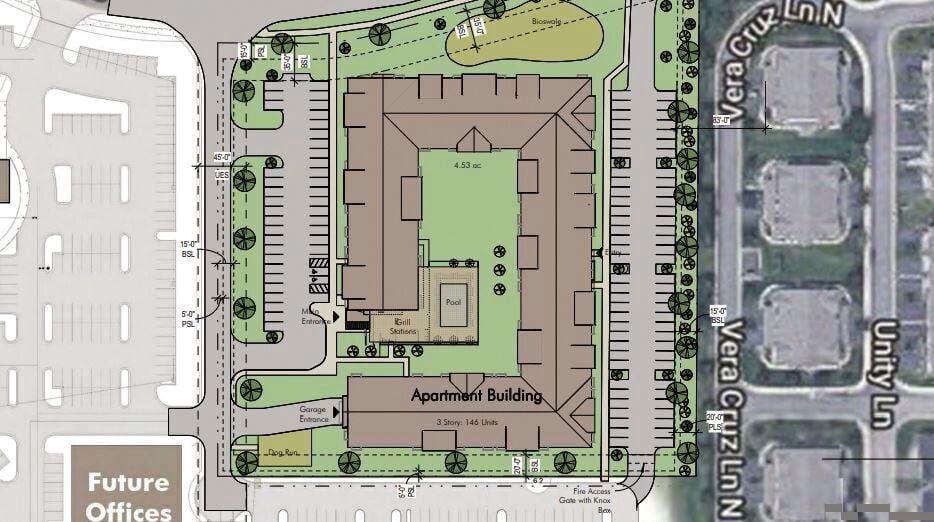 The overhead site plan for a new apartment complex north of Highway 610. The council had previously rejected a tax increment financing proposal for the project.

The Brooklyn Park City Council approved a conditional-use permit May 24 for a 146-unit market-rate apartment complex at 5505 96th Ave. N.

The complex, proposed by developer Enclave Companies, has been the subject of council debate since March. Earlier in May, the council rejected a proposal to subsidize 30 units at the complex to be affordable at 30% and 50% of the area median income.

“I do think that we missed out on a huge opportunity, but I think we have to understand that developers come to us,” Councilmember Tonja West-Hafner said. “Everything else is coming to us as a market-rate project and then we’re asking or offering money so that they’ll write down the debt.”

The project was originally proposed by Enclave as a fully market-rate complex. However, city staff members asked the developer to consider adding affordable units to the apartment mix. Switching the unit mix resulted in a funding gap for project, and the developer asked for city financing to fill the gap.

City staff members negotiated with the developer, bringing forward a proposal to provide $3 million in tax increment financing and an additional $1 million in up-front funds for the approximately $31 million project. An agreement based on the city’s mixed-income housing policy was brought forward to the council.

However, after construction unions spoke to labor concerns regarding the project, the council tabled the proposal and asked city staff to develop labor stipulations in the agreement.

Despite those stipulations, the council ultimately rejected the tax increment financing proposal May 17. As a result, the project moved forward in its original form, without any units subsidized for rents below the market rate.

The project was approved in a 5-1 vote, with Councilmember Lisa Jacobson dissenting.

The apartment complex was approved for the 4.5-acre property at the 610 Crossings development area, south of 96th Avenue and north of Highway 610. It is adjacent to the Wickford Village subdivision, as well as the recently approved Rasmussen University, Raising Canes, and Twin Cities Orthopedics sites.

The three-story complex will be constructed with a residential look intended to blend with the Wickford Village homes. It will have a unit mix of 30 studio units, 62 one-bedroom units, 43 two-bedroom units, eight three-bedroom units.

The unit density will be 32.4 units per acre.

In March, Enclave estimated that market-rate rents would range from $1,225 per month for a studio unit to $2,000 for a three-bedroom unit.

The parking ratio at the complex was proposed at 1.76 spaces per unit, below the city code requirement of 2.5 per unit. This prompted concern from Councilmembers Susan Pha and Boyd Morson.

However, these concerns were eased due to a covenant on the site requiring shared parking arrangements with the nearby developments. Twin Cities Orthopedics and Rasmussen will have an abundance of overnight and weekend parking for tenants and visitors, so parking at the site will be adequate, said Todd Larson, senior planner.

Jacobson said she still opposed the project because she believes the city is approving too many one-bedroom units in the neighborhood. “I feel like we are doing what we said we didn’t want to do,” she said. “My stance on that has not changed.”

“When we have specific land that’s still available for higher-density housing being built, I would like those projects to be of a mixed income housing, not just market rate,” Pha said. “It’s hard for me to support a project that’s going to be market rate that’s going to be in a location which I think would be great for affordable housing.”

West-Hafner said the council ought to reconsider its mixed-income housing policy to ensure that all new housing projects have an affordable element, rather than just developments that have a city funding element.

“We have to just say we need to fix our policy, I think,” she said. “It broke my heart when we didn’t approve the funding to help them. … I’m bummed out that we missed out on affordable units.”

City Attorney Jim Thomson said that since the proposal meets the city’s zoning and land use requirements, the council had little discretion to reject the proposal. The developer could likely sue the city if the development were rejected, he said.

“This is an allowable use in this zoning district,” Thomson said. “I haven’t heard anything that would say that this particular application does not comply with your conditional-use application requirements.”