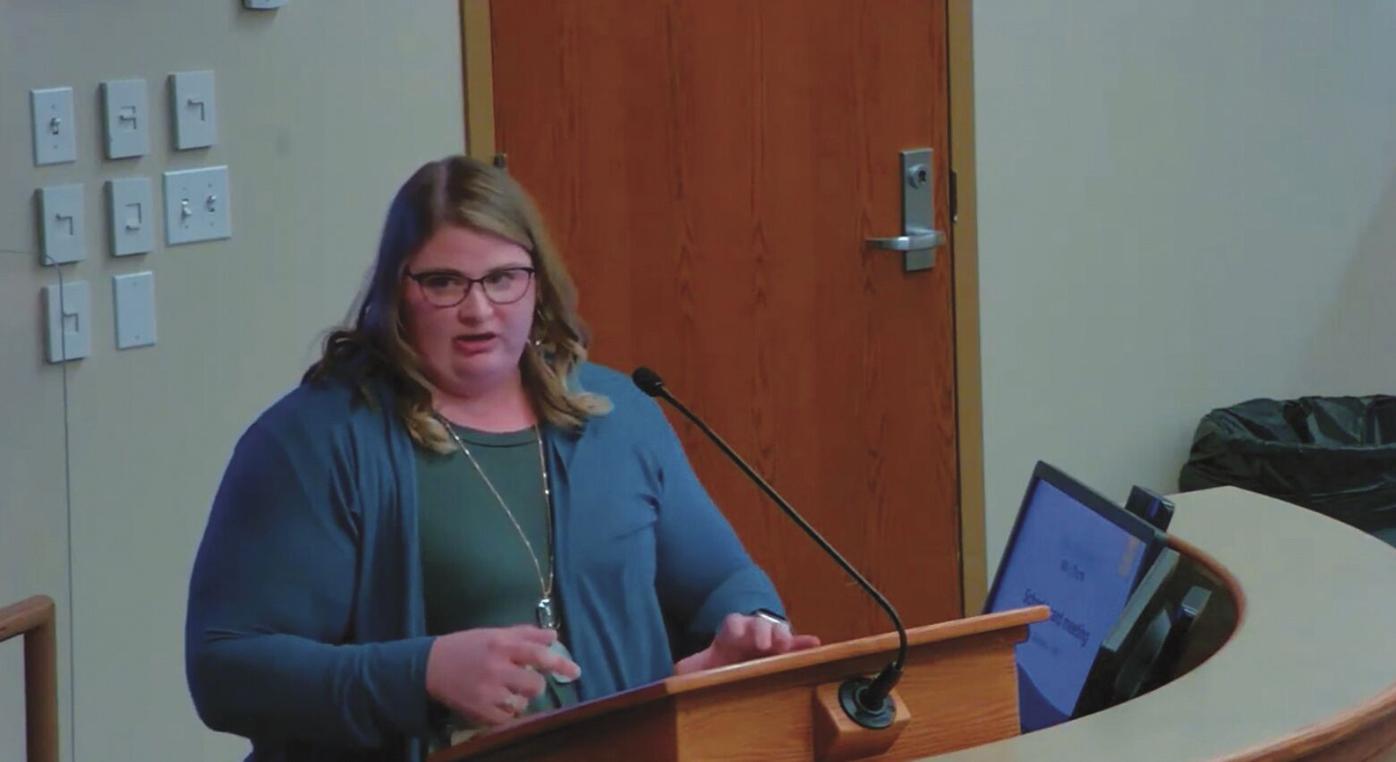 Instructional Materials Reevaluation Committee chair Rose Tann talks to the Osseo School Board about the committee’s unanimous approval to keep Noah’s book in the curriculum. 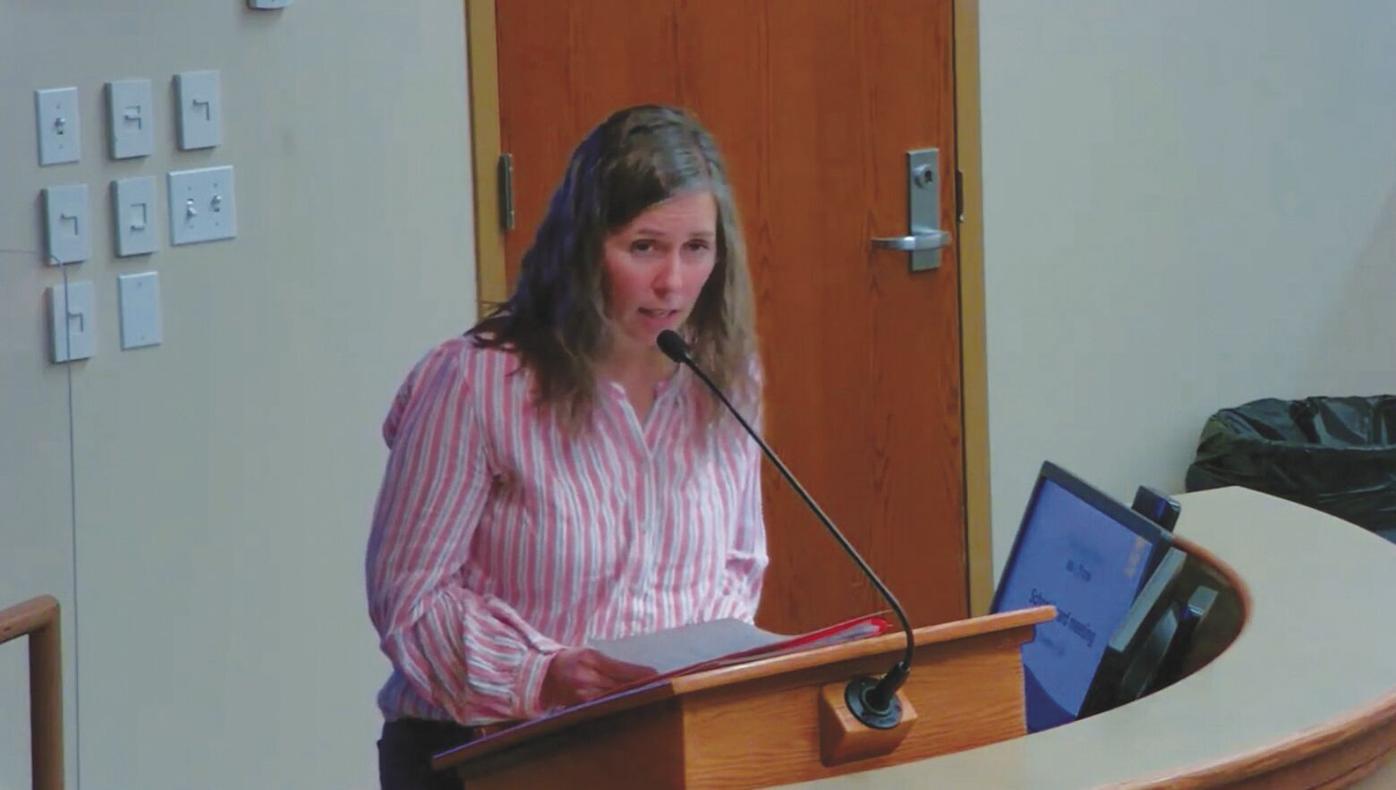 Celeste Rundquist addresses the Osseo School Board at the Dec. 14 meeting.

Celeste Rundquist felt compelled to do something. As the parent of a freshman boy at Osseo Senior High, the oldest of her five children, Rundquist heard from her son that they were reading a book in ninth grade English class called “Born a Crime,” an autobiography written by comedian and talk show host Trevor Noah.

Rundquist, who said she values being involved in his children’s education, heard from her son that they were reading what she called “inappropriate material,” including “vulgar language, violence, sexual verbiage, and references to pornography.” So Rundquist, her husband, and their son decided he would read a different book for the curriculum. Every day when the class would listen to the audio version of Noah’s book as a group, Rundquist’s son went to a different classroom and read another book that was approved curriculum which meant ninth-grade standards, something she said was difficult for her son.

On Oct. 21, Rundquist sent in an official request for the removal of Noah’s book. Then Nov. 3, Rundquist, three anonymous high school students, and nine others from the Instructional Materials Reevaluation Committee met to discuss the status of keeping Noah’s book in the curriculum. After meeting for nearly 90 minutes, the committee unanimously voted to keep the book in the curriculum.

Then at the Dec. 14 Osseo School Board meeting, the board voted 4-2 to uphold the committee’s decision.

“Born a Crime provides an opportunity for students to learn about the lived experience of an adolescent boy during apartheid is a narrative nonfiction text which we do not have a lot of and meets the standards, and whether or not as a whole, the book is appropriate for ninth grade,” secondary curriculum coordinator Jill Kind said at the committee meeting.

“Born a Crime” reinforces the understanding of a theme, and teaches about identity. Students that have read this book say they remember it years later and were glad they read it. This book covers race, love, life, vocabulary, and identity,” Blake Jorgensen, a ninth grade English teacher at Osseo Senior High, said in the committee report.

Other points brought up by committee members included that some of the vulgar language heard in the book is nothing different from what students hear in the high school hallways and that it is a small percentage of the verbiage used in the 300-plus page book, and other books with mature content that some could deem inappropriate like Romeo and Juliet, Of Mice and Men, To Kill a Mockingbird and others are included in the curriculum.

Also brought up by committee members was the fact that the use of mature content needs to be taken into context concerning what themes are being talked about in those excerpts.

But for Rundquist and other parents who spoke at the school board meeting, they see it differently. At the committee meeting, Rundquist referenced the publisher’s guide to the book, which recommends the book for students in 11th and 12th grade, as well as a Compass Book Review which listed the book as 18+, and Common Sense Media, which did not review it since they deemed it an adult book.

School Board member Heather Douglass said that while Jorgensen claimed he had never had concerns raised about reading Noah’s book, she had heard of previous complaints from community members. “This isn’t new,” Douglass said at the board meeting.

Like the parents, Douglass doesn’t want the book to be banned, but instead only in the curriculum for juniors and seniors, not freshmen and sophomores.

“After reading the book, there is some valuable information in the book,” she said. “There are a lot of themes that are appropriate for older students but not for younger students. I do not believe we should affirm this book for grades nine through 12. I believe it should be affirmed for grades 11 and 12. I don’t support censorship or the removal of books from our schools. But I think we need to be cognizant of what’s appropriate for students at different age levels.”

For parents like Rundquist, they say it is not just the fact that their children are exposed to mature content they might deem inappropriate, but they criticize the district for the lack of transparency in knowing their children would be reading a book like that.

Rundquist said that while she was given the title of the book in the course syllabus and at the learning conferences at the beginning of the year, she didn’t know the specific content of the book. “Providing transparency up front has to be essential. It is what we’ve committed to doing,” Douglass said.

School Board member Thomas Brooks voted in favor of keeping “Born a Crime” in the curriculum but voiced similar concerns about the issue of transparency.

“In terms of the book itself and all that it represents, I support these key themes that are in the book,” Brooks said. “I think it is an important book with very important relatable content. But for me, the largest issue is there seems to be a lack of communication to families and parents; for them to be informed and to be able to help make a decision about a possible alternative. I find myself frustrated that the board is even put in this position over something that could have been communicated in advance.”

Amanda Sanvik, a parent of two children in the district with her youngest set to be a freshman at Osseo Senior High next year, isn’t asking for books to be banned, but rather transparency for parents.

“What I’m asking for is the right to know as parents what our children are going to be exposed to ahead of time so we can decide what is best for them,” Sanvik said. “This is not about censorship. I’m not asking for books to be removed. I’m asking for transparency.”

Noah’s book is currently being taught at Osseo Senior High, not at either Maple Grove Senior High or Park Center Senior High.

Rundquist and others compared this situation to health classes, where parents are informed of what is being talked about in class, and how this is not treated the same way. “We are not asking to banish books, we are not here to dictate the curriculum. We are calling on [the school board] to act to stop forcing unwanted sexual talk on our children, families without consent and awareness and respect,” Rundquist said.

While Rundquist, Sanvik, and other parents don’t view this as an issue of censorship, some do. Dhaivyd Hilgendorf has worked as the media specialist at Park Center High School for the last 12 years. As the father of three young adults, Hilgendorf said he reads a lot of young adult literature and got a chance to review Noah’s book before Rundquist’s appeal was made. He is wary of removing a book because of ideological reasons, something that in his mind could set a bad precedent.

“‘Born a Crime’ is developmentally appropriate for ninth-grade students, particularly when it is read in a guided learning environment,” Hilgendorf said at the school board meeting. “It is an excellent resource for high school students who want to explore causes of racism. To remove this book now would set a precedent that bypasses our district’s policies. It is considered censorship when a book is removed from the curriculum for ideological reasons. We have to consider if we want Osseo Area Schools to be permanently labeled as a book-banning organization.”