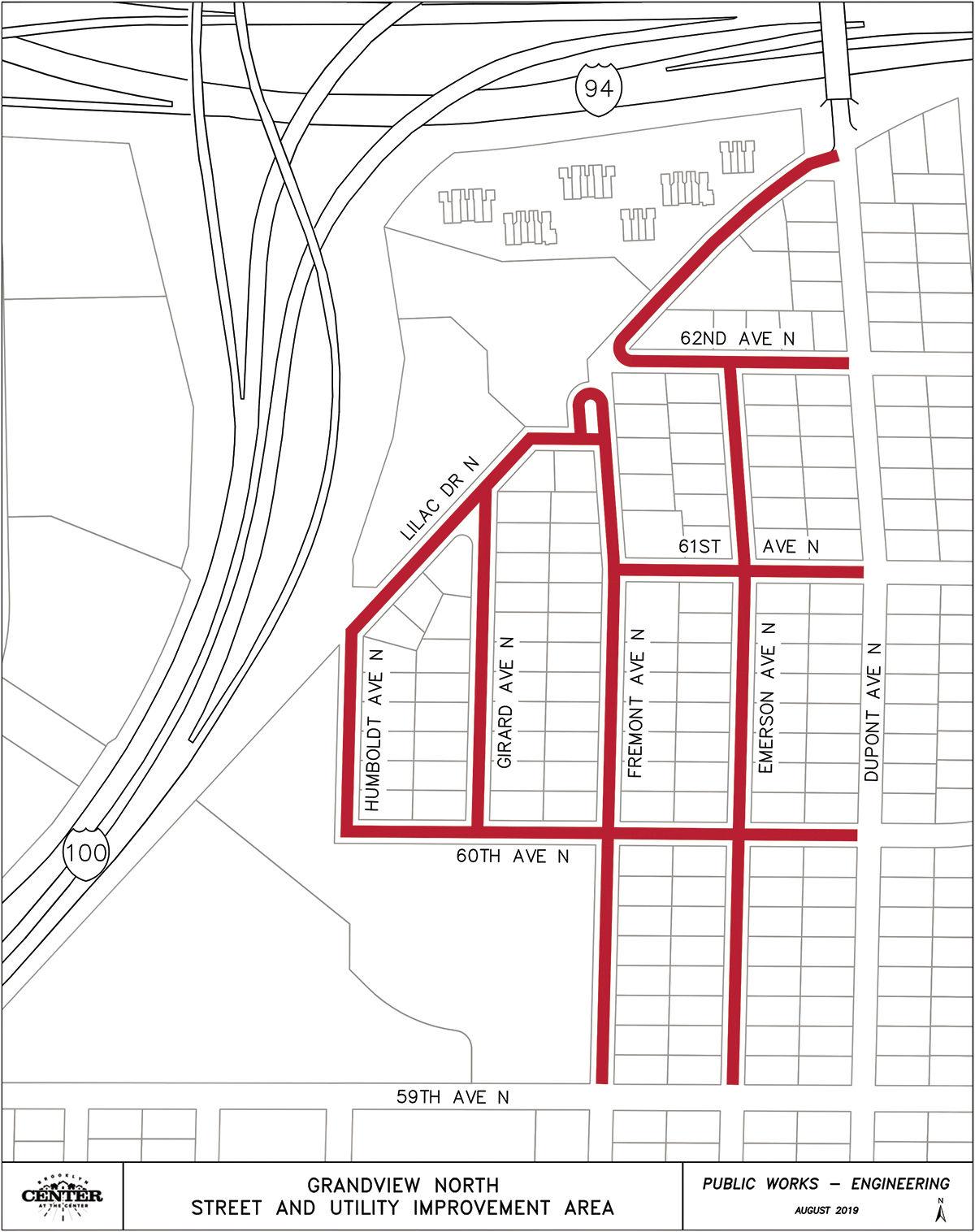 An overhead map of the Grandview North Reconstruction Project. The project was halted for a brief time by a mayoral proclamation before the contractors and city came to an agreement to add additional safety measures for at-risk residents in the neighborhood. (Submitted image) 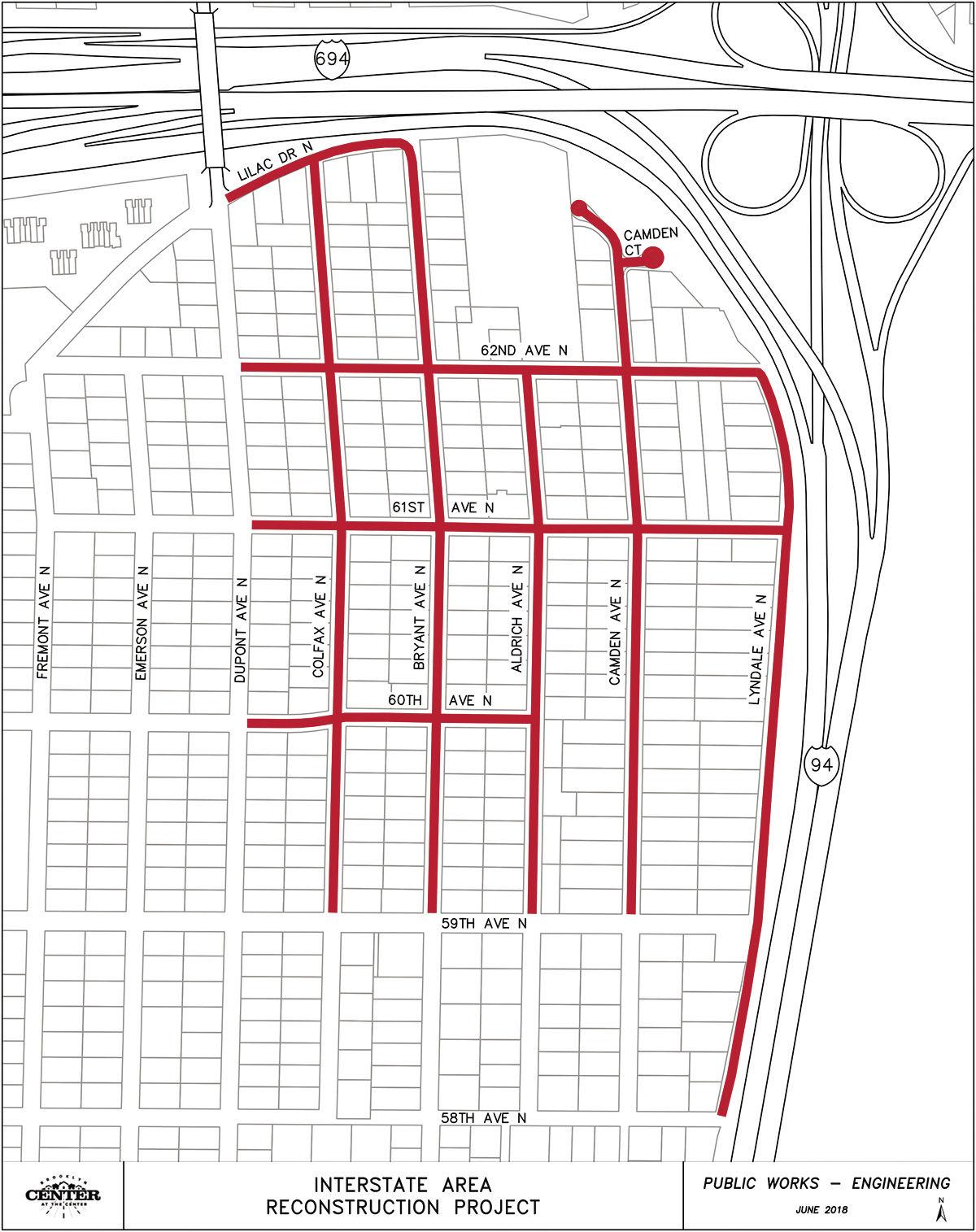 An overhead map of the Interstate Area Street and Utility Improvement Project. The project was halted for a brief time by a mayoral proclamation before the contractors and city came to an agreement to add additional safety measures for at-risk residents in the neighborhood. (Submitted image)

Two road projects in Brooklyn Center will move forward after the city temporarily stopped the projects due to COVID-19-related health concerns.

The Interstate Area Street and Utility Improvement Project and the Grandview North Reconstruction Project will continue with added safety measures to address respiratory concerns in the neighborhood.

The COVID-19 outbreak combined with other health concerns, however, complicated matters, according to Brooklyn Center Mayor Mike Elliott.

Elliott said that a resident who lives in the project area reached out to city staff and the council in late March to say that she was concerned about the projects because she has children with respiratory issues that occasionally use ventilators. Construction dust and particles can exacerbate these respiratory issues, and there are many children and adults who suffer from respiratory illness in the neighborhood, Elliott said.

“Last year, dust from the construction sent a teen to the emergency room in this same neighborhood,” he said.

“When I inquired on March 27, the city manager told me he initially spoke with the staff and that they had decided nothing could be done about her concerns,” Elliott said. “After I became aware, I worked with the staff and the city attorney, and together, we all decided the best course of action would be to issue a formal proclamation. The proclamation temporarily suspended the projects to allow time to address the health concerns of which we were now aware.”

The COVID-19 outbreak made the situation particularly concerning, Elliott said.

“The issue became unique and different with the COVID-19 threat and the understanding that there was a cluster of children with respiratory illness in this area,” he said. “The governor had just put in place a ‘stay at home’ order. Yet we had information within our own community that we had children with conditions that made it dangerous for them if the project continued without mitigation.

“The danger included a large dirt mound and construction debris next to the home of two of these children who suffer from respiratory illness and were on and off ventilators,” Elliot continued. “COVID-19 is much more dangerous for individuals with respiratory disease. With the coronavirus threat, we wanted to avoid sending people to the hospital at a time when our health systems are overburdened.”

Elliott cited Minnesota Department of Health data for the 55430 zip code, saying the area has some of the highest rates of childhood and adult asthma hospitalizations and emergency room visits in Hennepin County.

“When I became aware of the health concerns on Friday, March 27, we tried to get the companies to voluntarily suspend the projects on a temporary basis. At least one of the companies refused. I issued the temporary suspension to allow time for the health issues to be addressed,” he said.

“A delay in construction is hereby ordered for the Interstate Project and the Grandview Project until the Governor lifts the stay at home order, 30 days, or the end of the emergency, whichever occurs first. Once the ordered delay ends, construction these projects shall proceed, and applicable construction deadlines shall be extended to reflect the period of delay resulting from this emergency proclamation,” the proclamation reads.

After the proclamation was issued, both construction companies filed a civil suit against the city. Court records show that S.R. Widema, Inc., R.L. Larson Excavating, Inc. vs City of Brooklyn Center was filed April 8. While the Sun Post did not have access to full court filing documents, it has been reported that the companies were claiming lost revenue on the projects due to the stop-work order.

“We feel certain we would have won the lawsuit,” Elliot said. “Our city attorney made that clear to us. However, our goal always was to suspend the project on a temporary basis to allow time to put in place appropriate meditation to protect the health of our residents. We were facing an emergency situation and took the appropriate action.

“Staff and our city attorney have been in communication with the construction companies since we first became aware of the issue,” he continued. “We have kept lines of communication open. Our objective was always to get the companies to work with us voluntarily to suspend their work and to take measures to protect the health of our citizens. We only issued the proclamation as a last resort.”

The city has the contractual authority to suspend a contractor’s operations, Elliott said.

“In addition to our contractual authority, postponing the particular projects was an appropriate use of the city’s emergency powers to address the health concerns related to the COVID-19 virus crisis and the vulnerability of these citizens,” he said.

After the lawsuit filing, the companies and city came to an agreement to rescind the proclamation and allow construction work to continue with modifications April 10. Court documents show the suit as dismissed with prejudice as of April 14.

“Once an agreement was reached [and] the Council approved the agreement, they subsequently rescinded the original proclamation,” Elliott said. “As a result of the suspension, and the subsequent agreement, there will now be substantial improvements that will better protect the health and safety of our at-risk residents. This includes the changing of and handling of the debris pile. It also allows for the installation of HEPA filters in all affected residences. If necessary, a resident can ask to move temporarily for up to 8 months while the project in their area is completed. Anyone who has a health condition (such as respiratory diseases like Asthma, COPD) that might be affected by the construction, can contact the city for assistance.”

According to Elliott, the timeline for the project is staying largely the same.

In retrospect, Elliott said he “absolutely” feels the city made the right decision in stopping the projects. “The city council and city staff involved agreed unanimously that it was the right decision. My responsibility as mayor is to protect the safety and health of all Brooklyn Center residents. I took action to meet that responsibility,” he said.