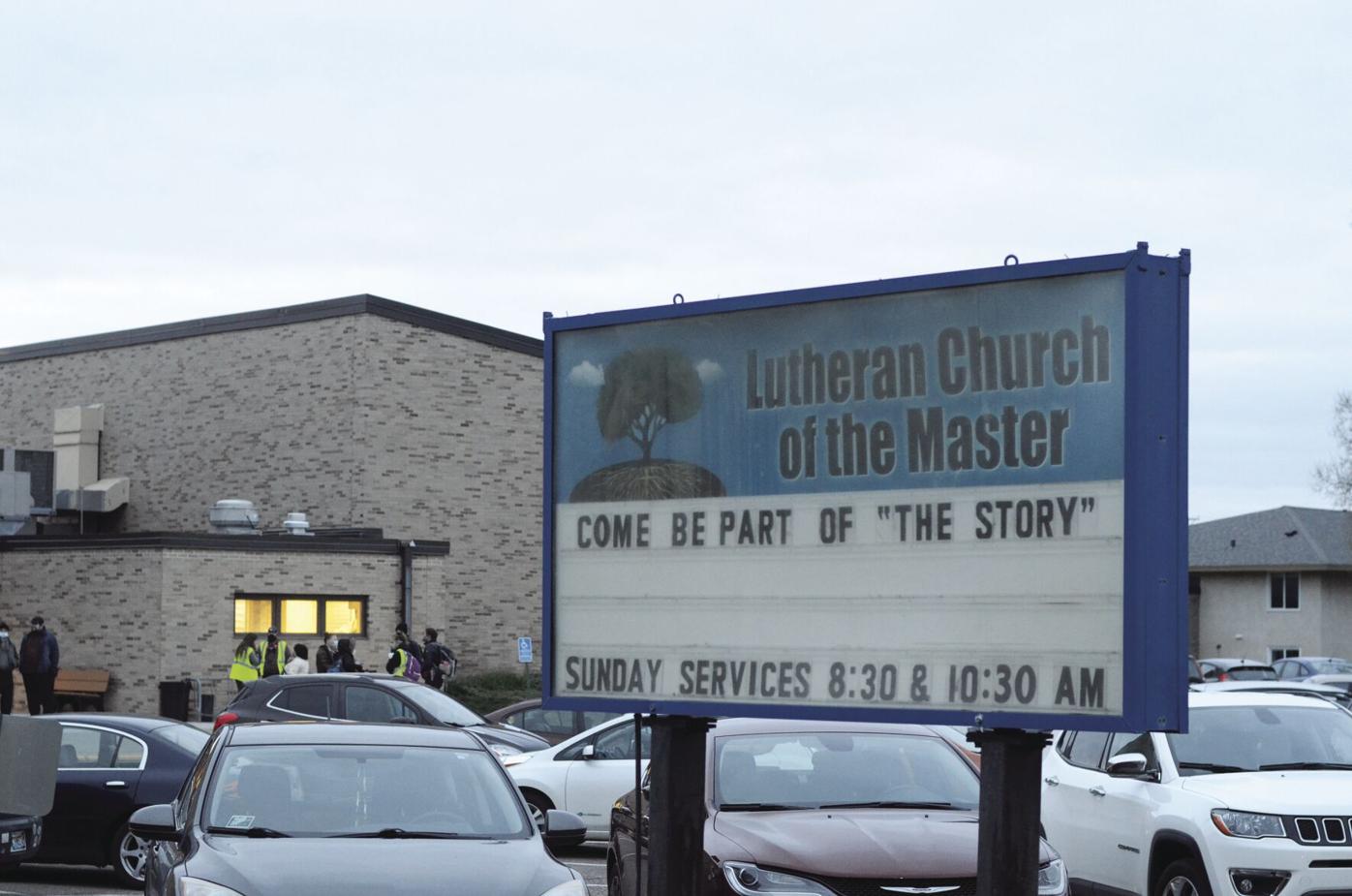 Located near the Brooklyn Center Police Department, Lutheran Church of the Master opened its doors to all comers after the killing of Daunte Wright and the ensuing unrest. The church served as a staging area for medics as well as a place for people to warm up and drink a free beverage. (Sun Current staff photo by Andrew Wig) 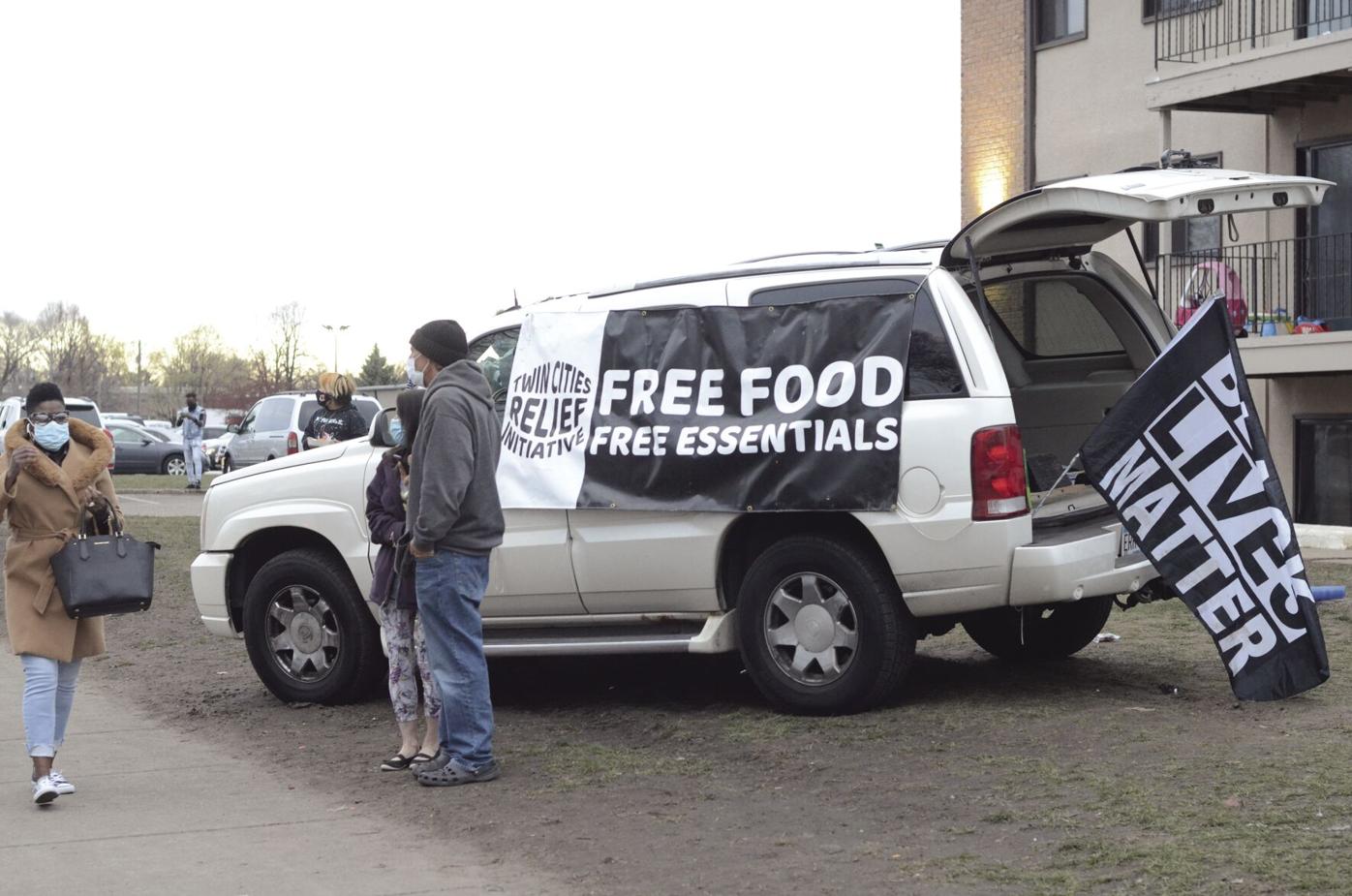 The Twin Cities Relief Initiative is set up at the Daunte Wright protest the evening of April 15, grilling for the hungry demonstrators. Rachel Nelson, the group’s founder, believes in the power of food to imbue racial-justice demonstrations with positive energy. (Sun Current staff photo by Andrew Wig) 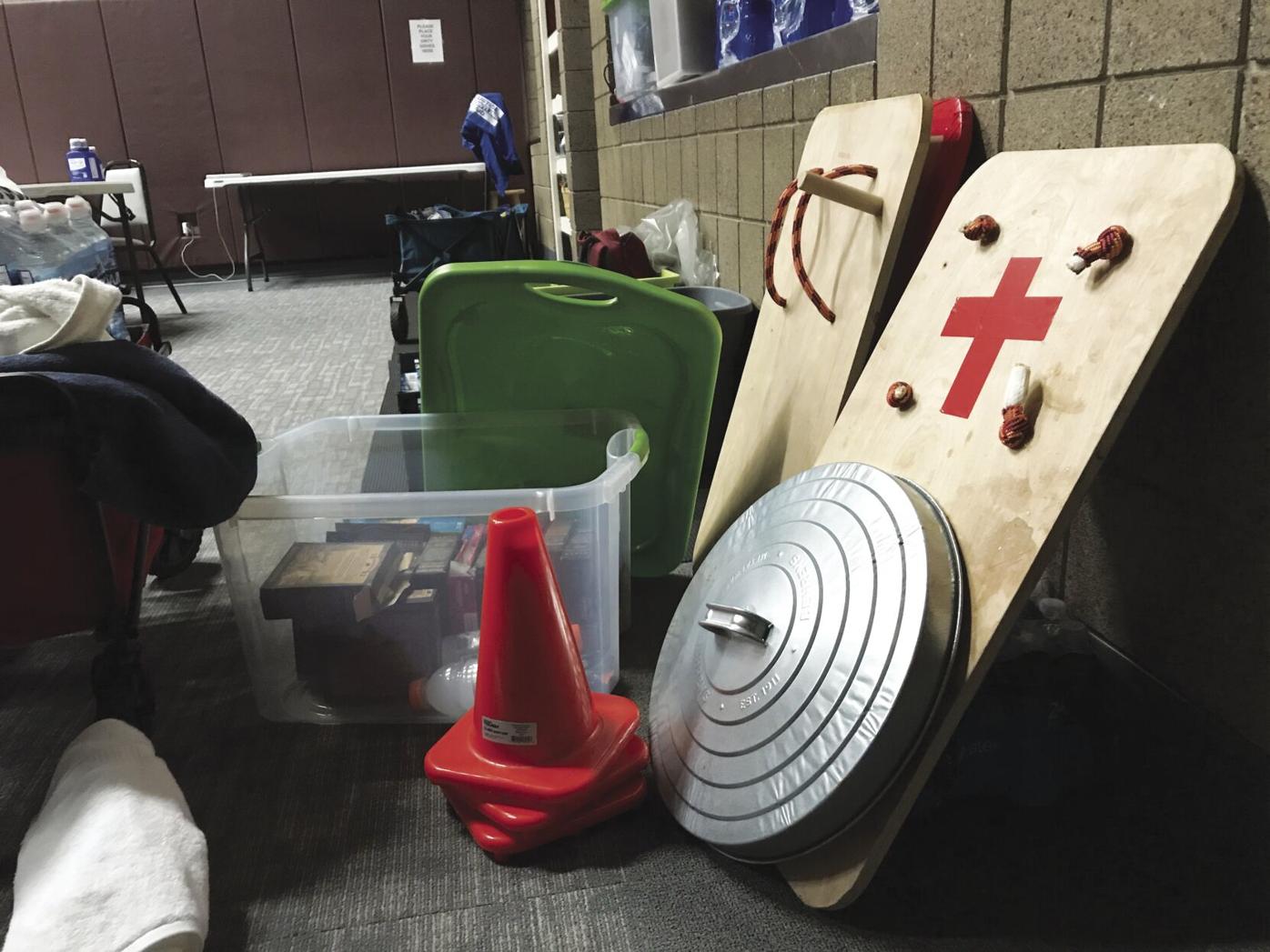 Medic gear stands at the ready inside Lutheran Church of the Master, which opened its doors to protesters, medics and reporters after the killing of Daunte Wright. (Sun Current staff photo by Andrew Wig)

When protesters began filling the street in front of the Brooklyn Center Police Department April 11 after the killing of Daunte Wright, they needed a place to park.

And Lutheran Church of the Master had a parking lot.

Cars started pulling in the evening of the Wright killing. Next, the church opened its doors.

“We just started putting together hot cocoa and coffee and treats and setting those out on the table,” Pastor Emily Wegscheid recounted after four days of protests in her church’s neighborhood.

The church was suddenly a place for people to get warm, get refreshed and get medical treatment. The mustering of resources was one facet of the rapid community response that followed the death of Wright, a 20-year-old Black man who was shot by a white Brooklyn Center Police officer during a traffic stop – a tragedy that former Police Chief Tim Gannon deemed a likely accident. Both Gannon and Kim Potter, the officer who shot Wright, have since resigned.

When Pastor Phillip Morris heard about the killing and the unfolding protests in the church’s neighborhood, he thought about the children who live nearby, and “just thought of everybody being afraid.”

So he came down to the church that evening. He watched medics arriving in the parking lot, there to treat people for whatever medical emergency might develop, including the effects of the tear gas and rubber bullets that law enforcement used to disperse the protesters.

“And so the next night, our whole parking lot was full. I guess word got out,” Morris said.

“I think people just knew it was a refuge and felt safe to come in,” said Amanda H., a medic with Justice Frontline Aid and a certified nursing assistant who asked that her last name not be used. “And most of them didn’t even know they were really coming in to seek medics, and once they’re here, they were like, ‘Can I wash my eyes out?’”

That was most of the medical treatment she provided, but the medic said she also cleaned up a rubber-bullet wound for someone who would later head for a hospital.

Word of the refuge spread beyond the protesters, medics and reporters who had descended on the area. The church started getting donations from people that have no connection to the place of worship, from as far away as Georgia, where well-wishers learned about their efforts on Facebook, Wegscheid said.

The pastors at Lutheran Church of the Master find themselves in a delicate position – reliant on the police for protection, but with a mission to help anyone who needs it, whether those people support the police or not.

“We so want to support our police, because they’re the ones who we’re going to call if we have a break-in,” Wegscheid said. “ … And they’ve been so good to us, and we want to be good to them”

“It’s chaos out there, but at least here, it’s peace.”

‘We feed the revolution’

Of course, the unaffiliated stance of the church was not the norm on the street outside the Brooklyn Center Police Department.

Rachel Nelson was on the scene, in the front yard of an apartment complex across the street from the station, in charge of grilling brats and burgers for the protesters.

Twin Cities Relief fed people for 42 days at George Floyd Square in Minneapolis after the killing that occurred there, and continued in that mission at protest marches the rest of the summer, Nelson said.

The goal, she explained, is to provide “something that’s tangible, and not just the anger and hostility. Being able to feed the people and give them a full belly changes the conversation. It changes the way people feel, their entire demeanor and the way they approach things.”

Witnessing the diversity of those being fed by Twin Cities Relief, Nelson sees progress in the cause of racial justice. “That’s the only way this will change, is all these white fists up with the Black fists,” she said.

Here for the long haul

Reminiscent of community efforts that followed the killing of George Floyd last year, food and supply drives, such as a prominent one conducted by the Brooklyn Center School District, have popped up in the area. Meanwhile, other organizations have simply tried to keep doing what they do best.

Brooklyn Center-based Community Emergency Assistance Programs, for instance, was present long before the events of last week, and plans to be around long after the eyes of the nation have moved on.

Providing emergency services in an era of tumult, Kennedy has grown used to the rhythm of crisis. “It feels like waves,” she said. “There’s like, a pause, and then another thing comes.”

CEAP’s approach, she explained, is to stay anchored as “the lighthouse in the community, the safe place in the storm.”

At the same time, the organization tries to stay nimble as it responds to crisis after crisis, including a pandemic that isn’t yet over. “Because of our station in the community, we’re one of the first places people turn to,” Kennedy said.

An area of particular focus at the moment is the collection of hygiene kits, she specified.

The help that has materialized in pop-up form is “incredible,” Kennedy observed, but CEAP plans to continue serving Brooklyn Center in the same way it has for nearly five decades.

Morris, the pastor, brings the same approach, assuring those seeking refuge: “We’re not going to run away. We’re going to be here with you on this.”