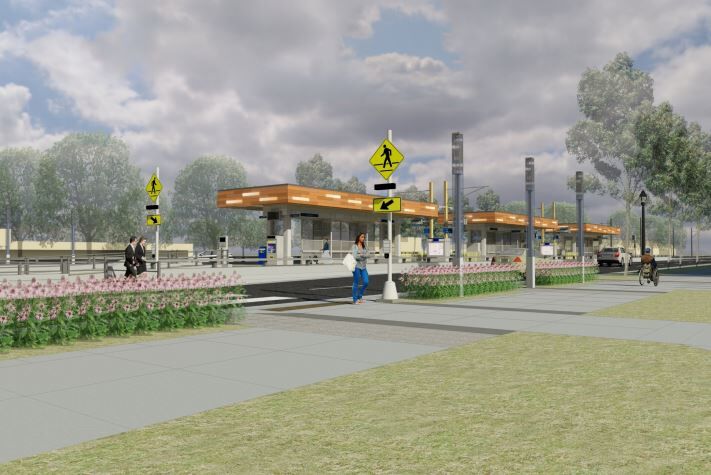 A rendering of the 85th Avenue station in Brooklyn Park. This perspective is looking at the station and to the northwest.

Planning for the Bottineau Blue Line light rail extension took another step forward July 15 with the release of new route renderings. Stakeholders in the Corridor Management Committee and others listening in reviewed the bird’s eye renderings for portions of light rail on County Road 81 in Crystal and Robbinsdale, as well as intersections along the Lowry Avenue and West Broadway route options in Minneapolis.

CMC Chair and Met Council President Charlie Zelle said the latest phase of planning is when the project office begins to understand the issues to be worked through with the current corridor proposal.

“We’re really realizing how critical these elements are,” Zelle said.

Absent from the meeting were representatives from Golden Valley, Maple Grove, the Minneapolis Park Board, Brooklyn Center and Crystal.

The visuals had been reviewed by some community meetings and committees prior to July 16, including the citizen and business advisory committees. Business Advisory Committee Co-Chair Felicia Perry reported that committee members were expecting the project office to have discussions on the traffic impacts the light rail would have on the route, especially when changes were proposed to intersections and turn lanes. She said members were also concerned with adequate parking, and wanted a parking study to be conducted along the corridor.

Perry’s fellow co-chair Tim Baylor said he believes segments through the suburbs weren’t particularly controversial, though there was some discussion in the portion through Robbinsdale. Baylor, who was appointed to the committee through the Robbinsdale Chamber of Commerce, said he recognizes that the biggest population of people that would be affected by the light rail extension are residents of Minneapolis. Route options through Lowry Avenues and West Broadway, he said, may be better solved by the city’s planning department.

Before visuals were reviewed, Senior County Administrator Dan Soler offered an update on projected station locations. Brooklyn Park stops remain unchanged from a previous alignment, and were not discussed at length.

The Crystal station, which will be placed somewhere near the intersection of Bass Lake Road and County Road 81, was being considered at street-level or elevated over Bass Lake Road. Soler said the project office understands there is a desire for an overpass, or a way to keep north and south through traffic flowing and uninhibited by light rail activity, and also to provide greater safety for pedestrians.

Because ridership in the area would come from immediate residents, businesses, and those using bus transportation from New Hope and Brooklyn Center, Soler said the project office is interested in greater parking options than what is already offered, perhaps a park ‘n’ ride built into the station.

Nick Landwer, the Blue Line Extension’s design and engineering lead, said when it came to the tracks, center-running, at-grade light rail is the main consideration for the project office. Due to that, the six-lane roadway would be reduced to four, with two lanes moving in either direction. Space would remain for trails and walkways, Landwer added, and work would be done to ensure that road and its “higher-volume intersections” would still adequately handle traffic.

With the old alignment, a Robbinsdale station and park ‘n’ ride had been planned for downtown near the Hubbard Marketplace building. Soler said the only continuity with the new alignment in Robbinsdale was the goal to put the station downtown. A station location at 41st or 42nd avenues is being considered, with either a center or split platform, and tracks that run either along the center or on the side of the county road.

“All of those options are still on the table,” said Soler.

Landwer said the track on a tight section of County Road 81, like the portion between downtown businesses and town center, could fit in the center of the road and maintain two lanes of traffic in each direction. The retaining wall at Town Center meant that space had to be borrowed from the parking lot on the other side of the road, which contains some city-owned right-of-way. There were also opportunities to preserve walking paths and for boulevard space to be “reworked” next to the tracks, according to Landwer.

A potential station at North Memorial Health Hospital, which is near the border of Robbinsdale and Minneapolis, is the beginning of the portion of light rail that Soler acknowledged would be difficult. Soler said current conversations with North Memorial representatives put the station either in front of the hospital, elevated to connect it to a parking ramp, or further south on Lowry Avenue or West Broadway.

Elevated and side-running visuals were created for the tighter areas in Minneapolis that might see light rail, but the project office seemed wary of the impacts of both. The visual of elevated LRT still shows it taking up ample median space on the road, and the track itself stretches wide in the air. Zelle commented on the visual later in the meeting, saying an elevated position in some areas appeared ideal until visuals were drawn.

Landwer said side-running light rail would require signalized intersections whenever cars crossed over, and would result in the loss of access to driveways, roadways and alleys.

The project office is expected to find a community-supported alignment by the end of the year. For more information, visit bluelineext.org.