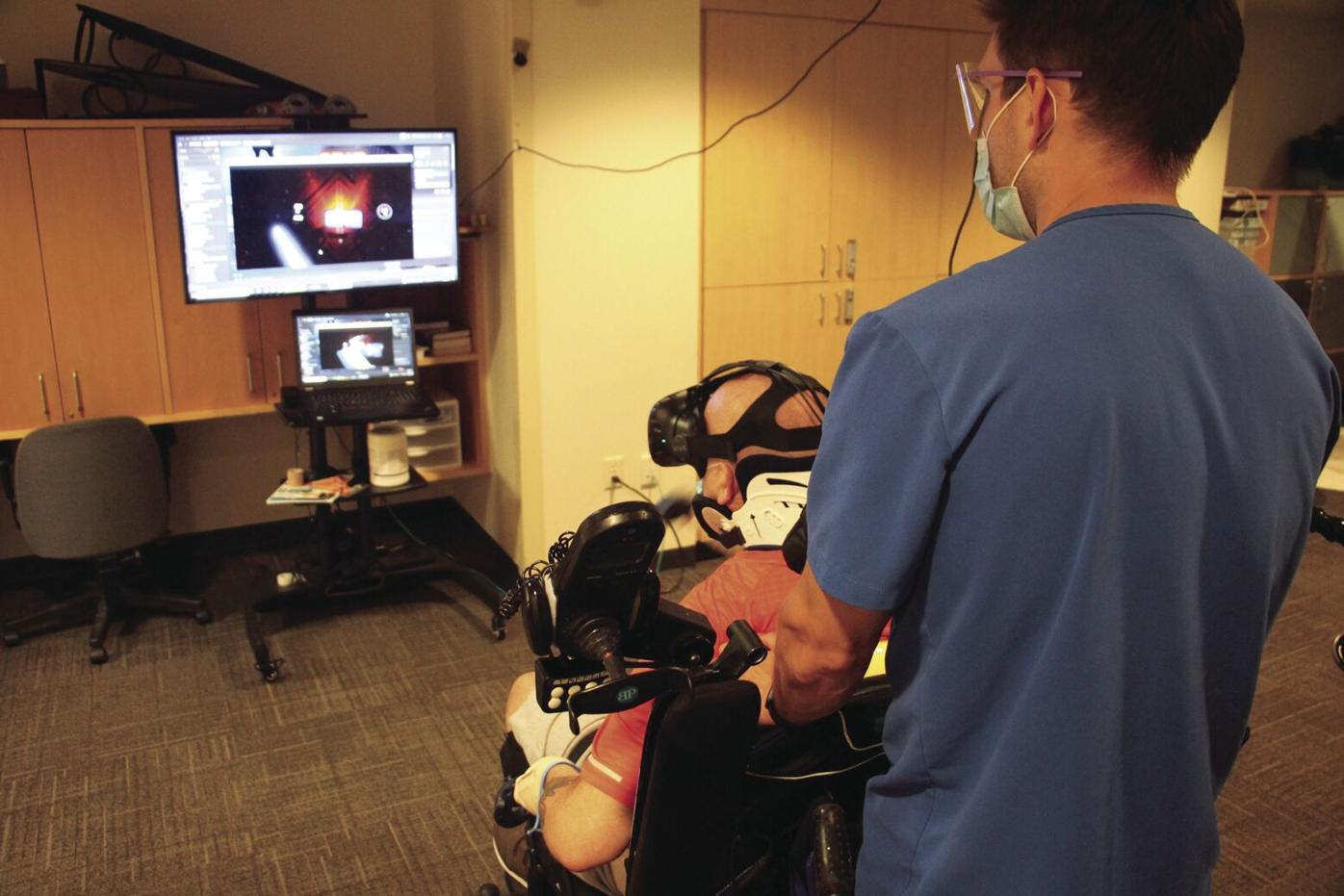 Courage Kenny Physical Therapist Dan Plocker anticipates movement from patient Jeff Voltin as he plays games with a set of virtual reality goggles. Plocker’s job is to strike a balance between supporting Voltin and allowing him freedom of movement to redevelop strength in his core. 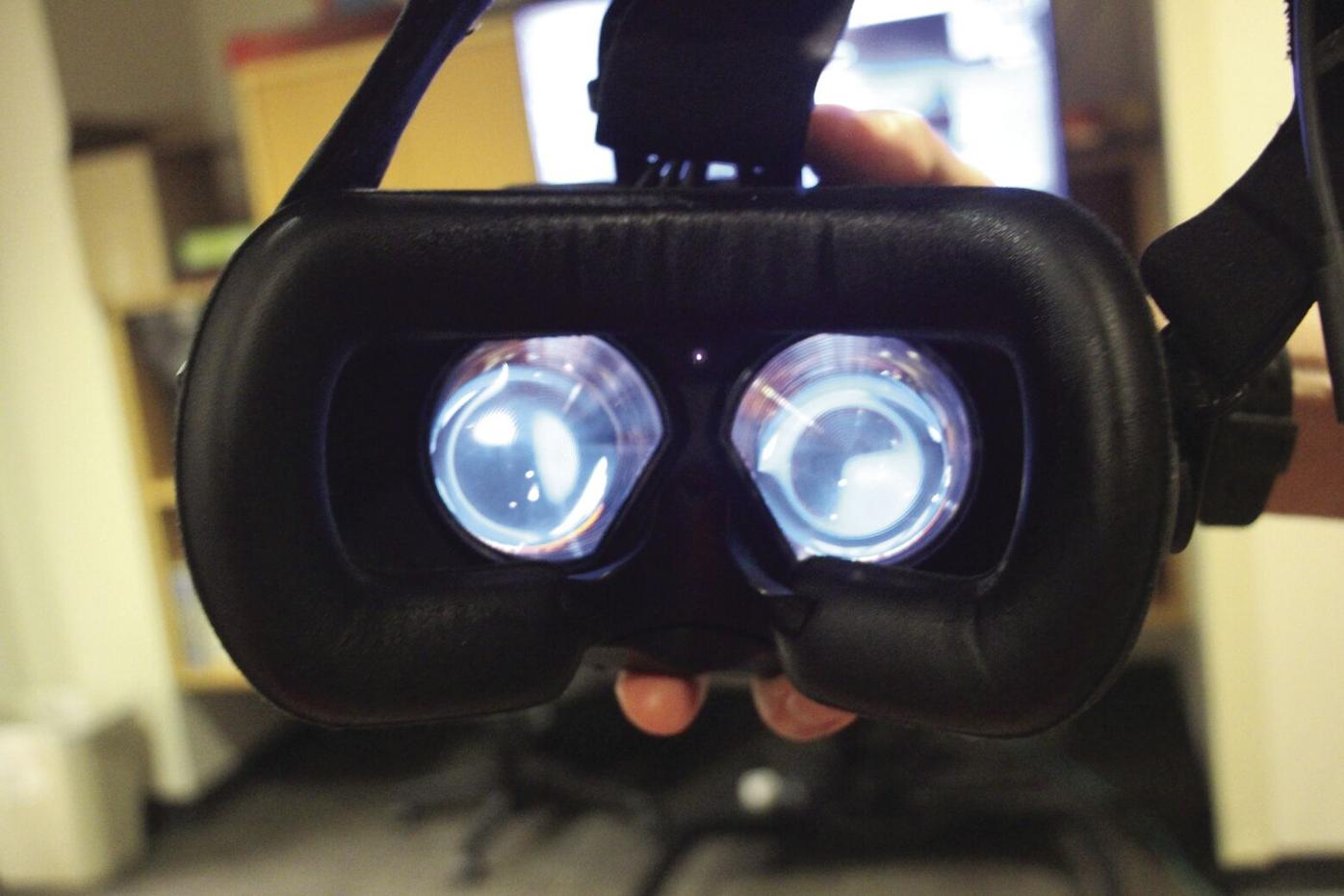 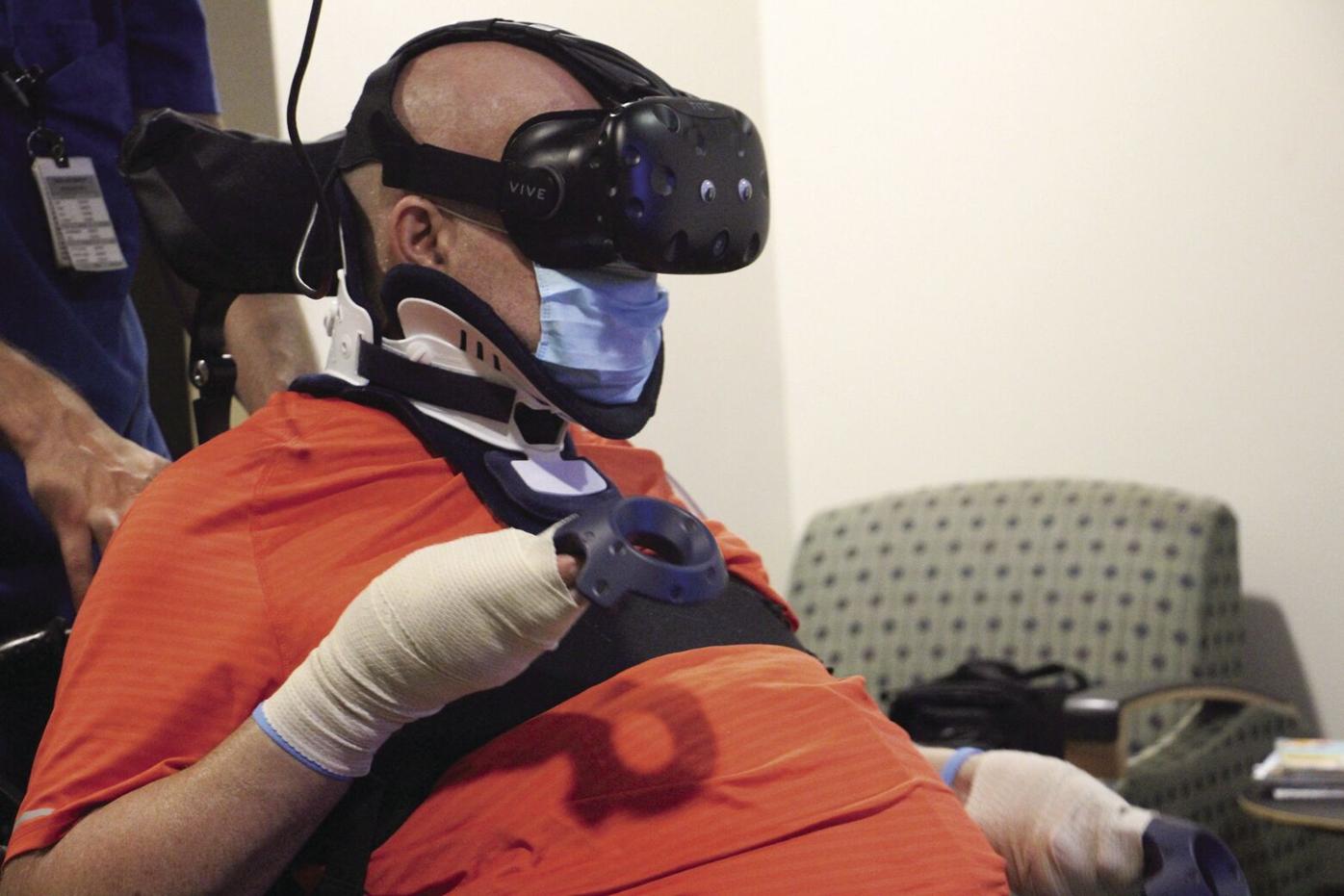 Jeff Voltin plugs into a level of Beat Saber, a virtual reality musical video game, to help regain movement in his arms following a spring crash which left him partially paralyzed from the neck down. VR is one of his prescribed rehabilitation activities at Courage Kenny in Golden Valley.

Courage Kenny Physical Therapist Dan Plocker anticipates movement from patient Jeff Voltin as he plays games with a set of virtual reality goggles. Plocker’s job is to strike a balance between supporting Voltin and allowing him freedom of movement to redevelop strength in his core.

Jeff Voltin plugs into a level of Beat Saber, a virtual reality musical video game, to help regain movement in his arms following a spring crash which left him partially paralyzed from the neck down. VR is one of his prescribed rehabilitation activities at Courage Kenny in Golden Valley.

Jeffrey Voltin was in a rollover car accident this spring that left him with a traumatic spinal cord injury. The Anoka man was in the middle of a move north to Virginia, Minnesota.

It’s been a tough path of recovery for the 56-year-old, who’s currently in the care of doctors and specialists at Courage Kenny Rehabilitation Institute in Golden Valley. He is partially paralyzed from his neck down, with limited ability to move his arms. Voltin wasn’t sure what to expect when he began his recovery at the institute, but he certainly wasn’t anticipating the number of video games he’d be playing to aid his recovery.

Once or twice every week, Voltin is wheeled to an all-purpose room, strapped into a pair of HTC Vive goggles, and finds himself in the immersive world of virtual reality gaming.

Voltin said the games push him to work harder than any other type of prescribed exercise.

“By the time the game’s done, my arms are so sore they’re about to fall off,” joked Voltin.

Courage Kenny Recreation Specialist Derek Laberge was tapped to spearhead the integration of virtual reality into Courage Kenny’s rehab programs in 2016. A fundraising effort by the Courage Kenny Foundation in 2019 pushed the plans closer to reality, and after a few COVID-related hiccups, Courage Kenny’s first VR program was born. Allina plans to expand the program from two sites to 19 sites this year due to its success.

Specialists say the games hit all the hallmarks of physical therapy: trunk stability; balance and coordination; activity tolerance; gross motor control; and range of motion. There are other forms of therapy that do the same things, but none seem to motivate patients quite the same way.

“It’s not that there’s something in this technology that’s healing people, it’s just the intensity of how hard they work when they use it that we find incredibly useful,” said Courage Kenny Physical Therapist Dan Plocker.

The most important element to neurological rehabilitation is repetition, Plocker said. Repeated movements solidify the connection between the brain and muscles: the more these neuropathways are utilized, the stronger the connection becomes. In some situations, nerves can regenerate if patients can stumble upon the right pathways.

Unfortunately, repetition is only matched in its high level of importance with a high level of distaste from patients. Plocker said many find it boring, and for many dealing with devastating injuries and new disabilities, sometimes discouraging. Virtual reality counteracts that by immersing the patient in a situation that makes repetitive movements exciting, and the nervous system is engaged for longer periods.

Before his injury, Voltin said he barely touched video games, but now he’s into Beat Saber, a rhythm game where players use a set of lightsabers to destroy flying blocks to the beat of the music. The controllers on a player’s hand detect motions to break the blocks; missed blocks continue forward and crash into the player’s face – only visually, of course.

Voltin’s one hour session begins in easy mode, but after a few games, therapists have him leveled up to expert. Because he is unable to grip objects, the controllers are strapped to his hands. Armrests that usually keep Voltin anchored in his wheelchair are removed. Plocker anticipates his patient’s movement by watching the game on a mounted television, arms hovering on either side of Voltin’s body in case he loses balance.

“A lot of times, with newer spinal cord cases, one of the scariest things is being confident and comfortable out in space with your trunk,” Laberge explained.

In the virtual reality environment, however, it’s easier to forget limitations.

“In this game, when the walls come by it makes me lean back and forth. When I first started, I didn’t have the core strength to do that,” Voltin said. “I have that ability now, where I didn’t three weeks ago.”

Courage Kenny staff have seen more VR-encouraged moments of confidence in patients. Laberge recalled a patient who had experienced a significant stroke and moved rigidly due to mobility issues on one side of her body. He recommended she try VR bowling, since she had played with friends twice a week for a decade. It was a natural fit.

“The very first time that she put a ball in her hand, she did this hop step. The look on her physical therapist’s face ...” Laberge trailed off and laughed. “She was already wired for that movement, but she had to be confident to try it, and in this immersive environment, she forgot what she couldn’t do.”

Even staff have given the goggles a try. Laberge has hosted staff play sessions over lunch to get people comfortable with the technology and thinking creatively about its applications.

Laberge personally sees endless opportunities to apply the technology to other disciplines.

“If we’re using it for occupational therapy, it could be for fine motor coordination, for speech therapy, you could work on problem-solving skills,” he said. “There’s a workplace simulator where a customer makes an order and the player needs to make change and figure out tasks in a certain order. There are many ways to progress it and adapt it.”