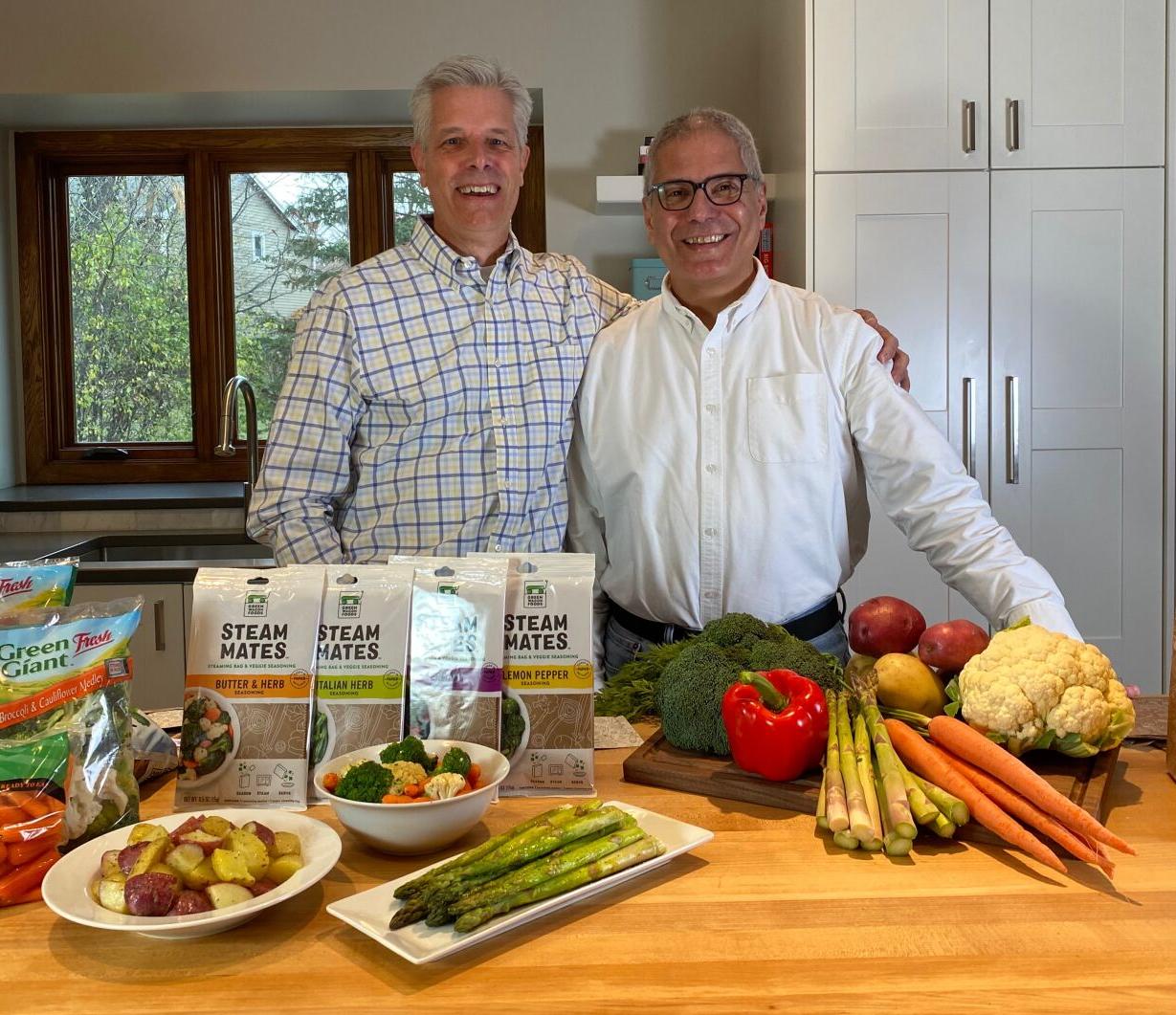 Peter Erickson and George Abide smile with the first product of their sustainable foods startup, Green Wagon Foods. The product, SteamMates, is meant to make vegetables better tasting and easier to prepare. 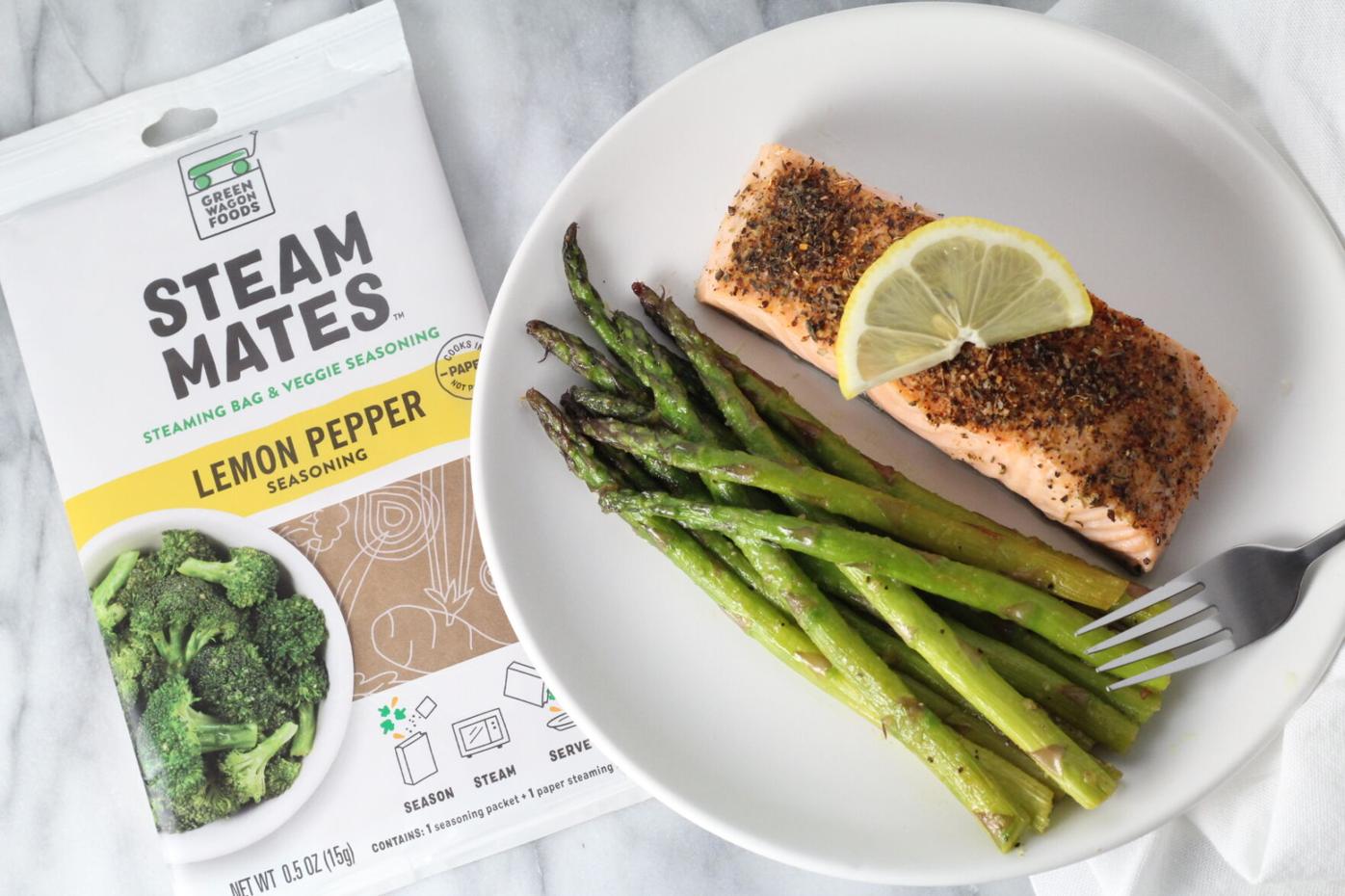 Peter Erickson and George Abide smile with the first product of their sustainable foods startup, Green Wagon Foods. The product, SteamMates, is meant to make vegetables better tasting and easier to prepare.

Peter Erickson said there is an “interesting paradox” in the food industry.

“We hear it all the time,” he said. “There is a consumer appreciation and understanding of the need to eat more fruits and vegetables. Nutritionists and the government have done a great job to make people understand that they need five servings a day ... but nine out of 10 people still don’t do it.”

Erickson built a career in food science, working his way up to head of research and development at General Mills, a short drive from his Plymouth home. Two years ago he made the difficult decision to retire, knowing full well his energy to do his job had hardly diminished. It wasn’t long after that he linked up with a former fellow employee, George Abide, whom Erickson had been sorry to see leave the company for a consulting job 20 years earlier.

“He was one of the most talented individuals,” Erickson said. “I remember when I did his exit interview, I told him I hoped to work with him again someday.”

Abide, who lives in Golden Valley, said he and Erickson shared different styles of an entrepreneurial spirit that made them lifelong friends. “Peter’s the make-it-happen guy, and I’m the one who likes to dream-it-up.”

Abide said his wife can attest to his breadth of eccentric ideas through the years, dating to his first idea and master’s thesis, catfish-on-a-stick.

“Instead of a corndog, it was catfish, with a hush puppy wrapped around,” Abide said. “I went to school in Mississippi where catfish farming is a big deal.”

The two decided to take a stab at the industry health-food conundrum the autumn before the pandemic. The reason for consumer aversion to fresh produce was no mystery: They had heard many times in their career that people found vegetables boring, tasteless, too expensive and too quick to spoil.

The result was an “old-school” approach that wouldn’t force healthy foods to moonlight as something else, said Abide. “We thought, why make hamburgers out of plants and cheese out of plants, when you can just make plants out of plants?”

This summer, their startup, Green Wagon Foods, put out its first product, SteamMates. The product contains one of four flavor packets and a microwave-safe paper bag. Any vegetable, fresh or frozen, can be enhanced and cooked using the product. It can be found in most area Hy-Vee and Cub Foods produce aisles, including those in New Hope, Robbinsdale, St. Louis Park, Plymouth, Crystal, Brooklyn Park and Maple Grove.

There’s even a seller in Leland, Mississippi, at the mom and pop grocery store in Abide’s hometown. After some buzz for the product was created by the local paper, Abide sent a complimentary case to the store owner. He was surprised when the grocer called to order a case a few weeks later and doubly surprised when he got a call for another case last week.

“It’s become one of our best-selling stores,” Abide said, with a laugh.

Right now, Abide and Erickson are the only employees of Green Wagon Foods. They contract with companies for raw materials and packaging. Erickson said his children have also been helpful in giving him product feedback, as they are the fourth-generation of food scientists in his family.

In particular, his daughter has been testing the product to its limits. She’s used the butter and herb packet with potatoes, added a splash of milk after microwaving and created a six-minute mashed potato; Erickson’s favorite of her creations is cherry tomatoes steamed in the Italian herb mix and olive oil, then poured on fresh pasta and topped with Parmesan cheese.

“All of a sudden you have this really fresh, delicious tomato sauce, it’s excellent,” Erickson said. The same could be done with a variety of vegetables to make pasta primavera, he added. The flavor mixes were chosen to be applicable to nearly any vegetable. Green Wagon Foods has an Instagram page that will regularly share recipe ideas for their customers.

The second component, the bag, is equally as important to the business’ mission. The paper is not lined with plastic, a material the founders learned consumers are uncomfortable making their food in, though many food companies market it as steam-in-bag safe.

Abide said prepackaged veggies also contribute to the flavor problem. They are rarely preseasoned and seasoning them after cooking can cause them to break apart.

The SteamMates paper bag seals in the moisture from the vegetable and prevents the loss of naturally-occurring nutrients that happens with other cooking methods like boiling.

“Steaming is one of the best ways to preserve all the good stuff in your vegetables, and the microwave is actually one of the easiest, most effective ways to do it,” said Erickson.

Even with their respective decades of experience, the Green Wagon founders have fallen into some sharp learning curves with their venture. The pandemic has compounded the situation by removing the possibility for traditional avenues of marketing a product, like in-store sampling. Erickson said it is just “part of the fun.”