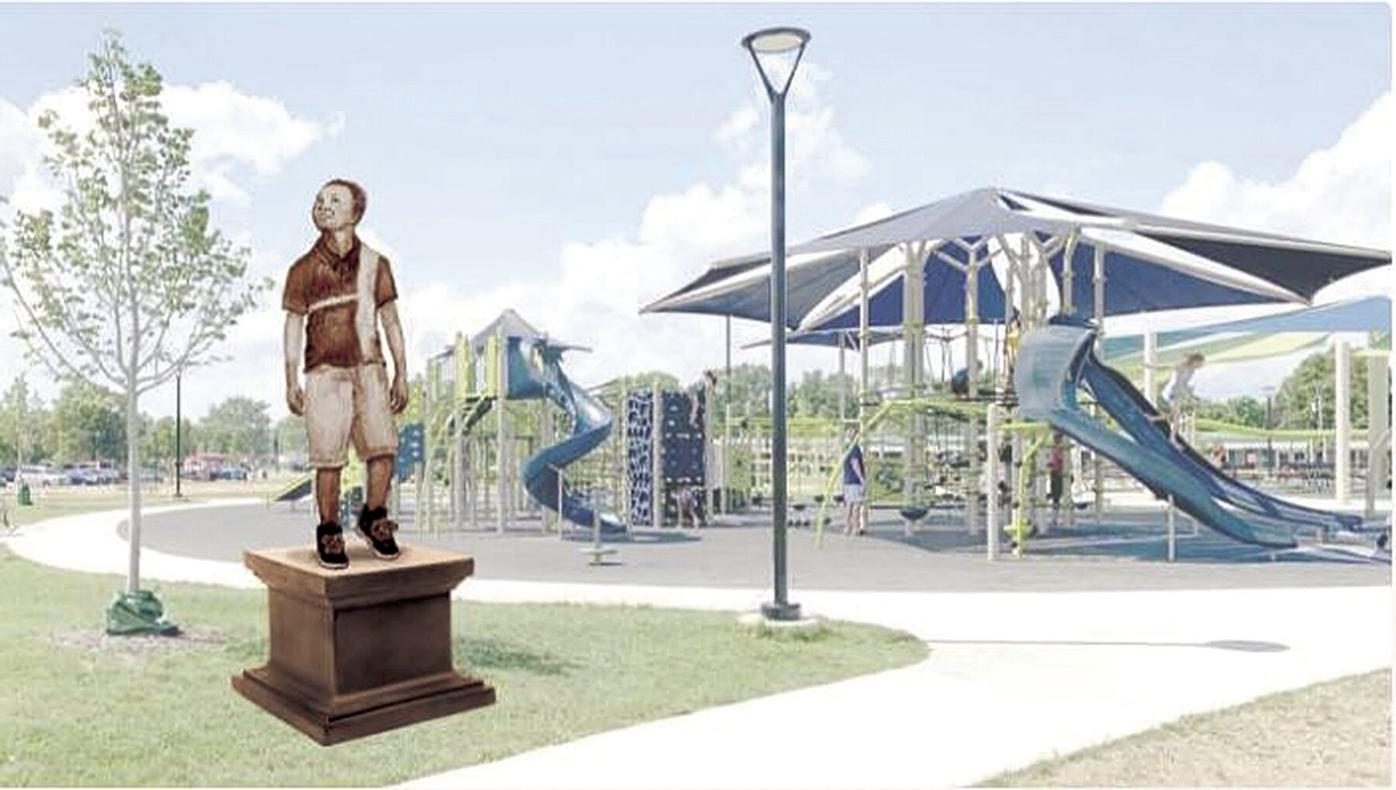 This is a conceptual drawing of the monument being considered for placement at Becker Park in Crystal. Fundraising for the memorial to the late Barway Collins is underway. 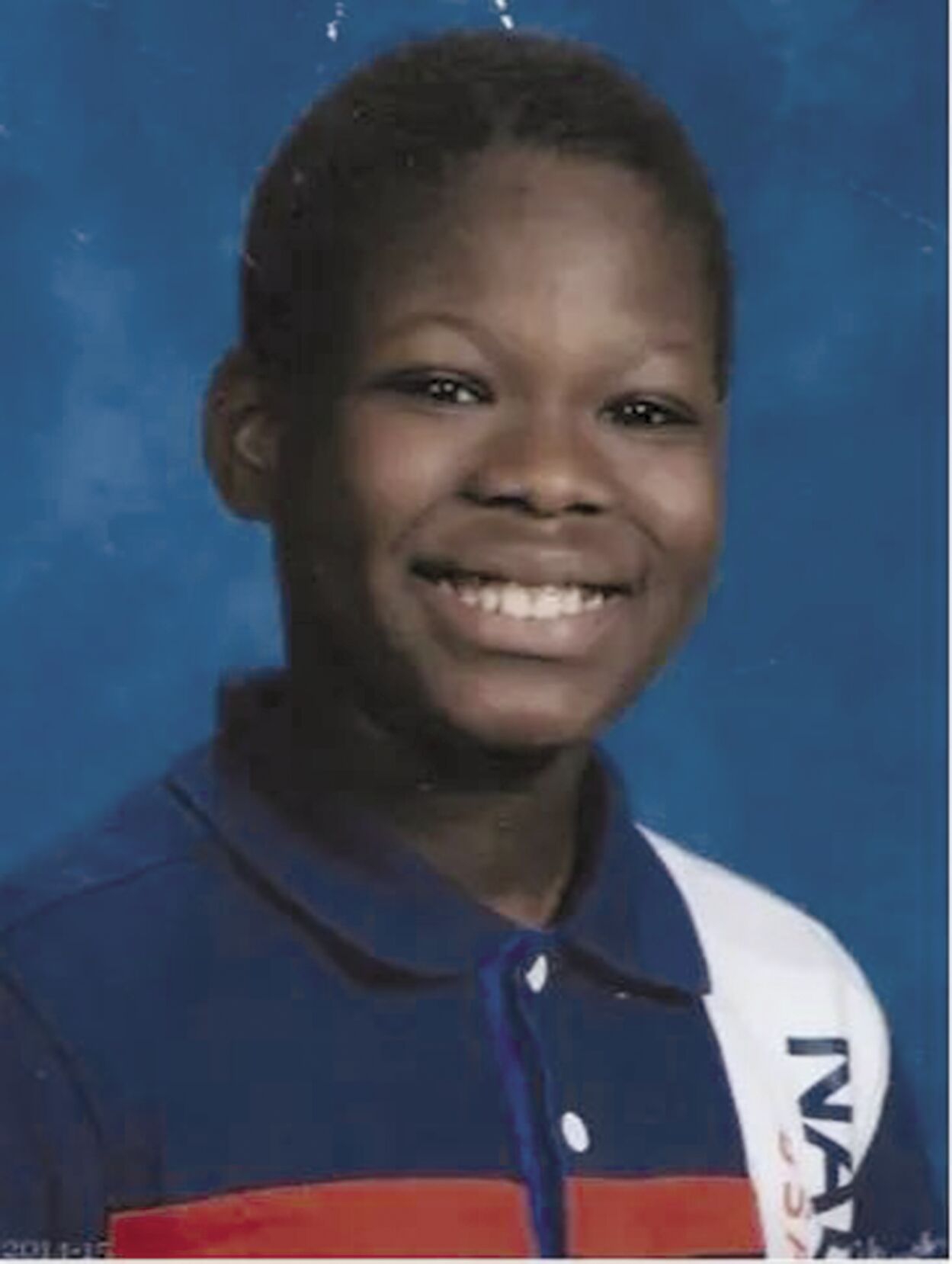 The late Barway Collins lived just steps away from Becker Park in Crystal before he was murdered by his father in 2015.

Crystal couple spearhead effort to memorialize the boy killed in 2015

That’s because he died in March 2015 at the hands of his father.

But Barway has not been forgotten. Jeff and Erin Kolb wouldn’t let that happen.

The Crystal residents have begun a drive to raise funds for the creation and installation of a monument the Kolbs hope will spread the happiness and joy many found in Barway.

The project includes the construction of a memorial and a life-sized bronze statue of Barway at Becker Park.

The statue would be approximately 54 inches tall. The pedestal, made of the same stone used around the park, would stand between 18 and 22 inches high.

“We had always wanted to find some appropriate way to honor Barway and the community together. That came from the shared tragedy and the shared grief,” Jeff Kolb said. “It affected people here quite a bit.”

Unfortunately, members of a Boy Scout troop were the ones to find Barway’s body. Barway’s father eventually admitted to killing his son.

Kolb, who had been elected to the Crystal City Council in November 2014, had been on the council only a few months before Barway went missing.

“I was present for a lot of the vigils and watched the community come together. ... We had hundreds of volunteers searching for Barway,” Kolb said.

When the renovations to Becker Park were finally finished last year, the Kolbs began thinking about how they could spearhead an effort for a memorial to Barway that could be placed in the new Becker Park.

“Barway lived at the apartment complex adjacent to Becker and that would have been his park,” Kolb said.

Their idea began to take shape after the Kolbs made a trip to Florida last year.

One of the things they like to do is visit parks in other cities. Erin Kolb serves on the Crystal Park Commission.

“In Florida we saw a similar type of memorial that we are planning. We got to talking about how that might be a good idea,” Jeff Kolb said.

After talking to leaders at the city, they set out to make the monument a reality. The first step was contacting a couple of sculptors about availability, initial costs and a plan. The second step was to begin fundraising.

The Kolbs were pleasantly surprised by the generosity.

“I really didn’t know what to expect from the community fundraising,” Jeff Kolb said. He added that they wanted to start with the online donation page before considering approaching community service organizations about the effort.

“We wanted to see what the initial donations looked like, even though we know there are many generous organizations in the community,” he said.

The drawing that depicts a monument near the Becker Park playground was created by city Councilmember Nancy LaRoche after she and Jeff Kolb had several conversations about what they envisioned.

“Nancy LaRoche has an artistic background, so I contacted her to sketch something,” he said. “... We talked and decided we wanted something light and joyous, a kid enjoying the park. Nancy and I looked at a bunch of memorials and settled on this.”

Though the final conception is likely to be different, Kolb said they wanted a depiction they could present to the community as part of the fundraising effort.

The Kolbs have also been learning about what it takes to create a monument.

He said the timeline for completion will depend on many factors, including the workload of the artist they select and the availability of materials.

“There are some logistical things we need to get through,” Kolb said.

Looking ahead to a finished monument, he said, “We don’t have a good timeline yet. ... I think it will be a about a year from now, maybe a little more, until we have a dedication ceremony.”

The overall cost is uncertain at this point, but Kolb said he learned that simple things, such as the clothes depicted on the subject, could drive the cost.

“The clothing your put on the person depicted can drive the cost up,” he explained. “Dresses and flowing clothing are much more expensive than pants, because there’s more folds in the fabric. I never considered that. The main things that determine the cost are the height, the amount of material and clothing depicted.”

The Kolbs have also considered how the memorial relates to the long-term vision of the park.

“Becker Park is to be a space for public art, so to have this serve as the catalyst as the first placement of art, I think, will be very nice to be able to have something that’s very meaningful to the community,” Kolb said.

The city of Crystal is a partner in this project and donations may be made directly to the city. Funds will be deposited in a special initiatives fund for the project. One hundred percent of donations will go to the creation and installation of the statue.

Checks (indicate Barway Memorial on the memo line) should be made out to the city of Crystal and may be dropped off at City Hall or mailed to City of Crystal, 4141 Douglas Drive N., Crystal, MN 55422.

Donations may also be made online through GoFundMe, at bit.ly/3eQchnX.

Donations made to a city for a public purpose are generally tax-deductible. Individuals or groups who donate a total of $500 or more will be recognized on a bronze plate to be located on the rear of the statue pedestal.