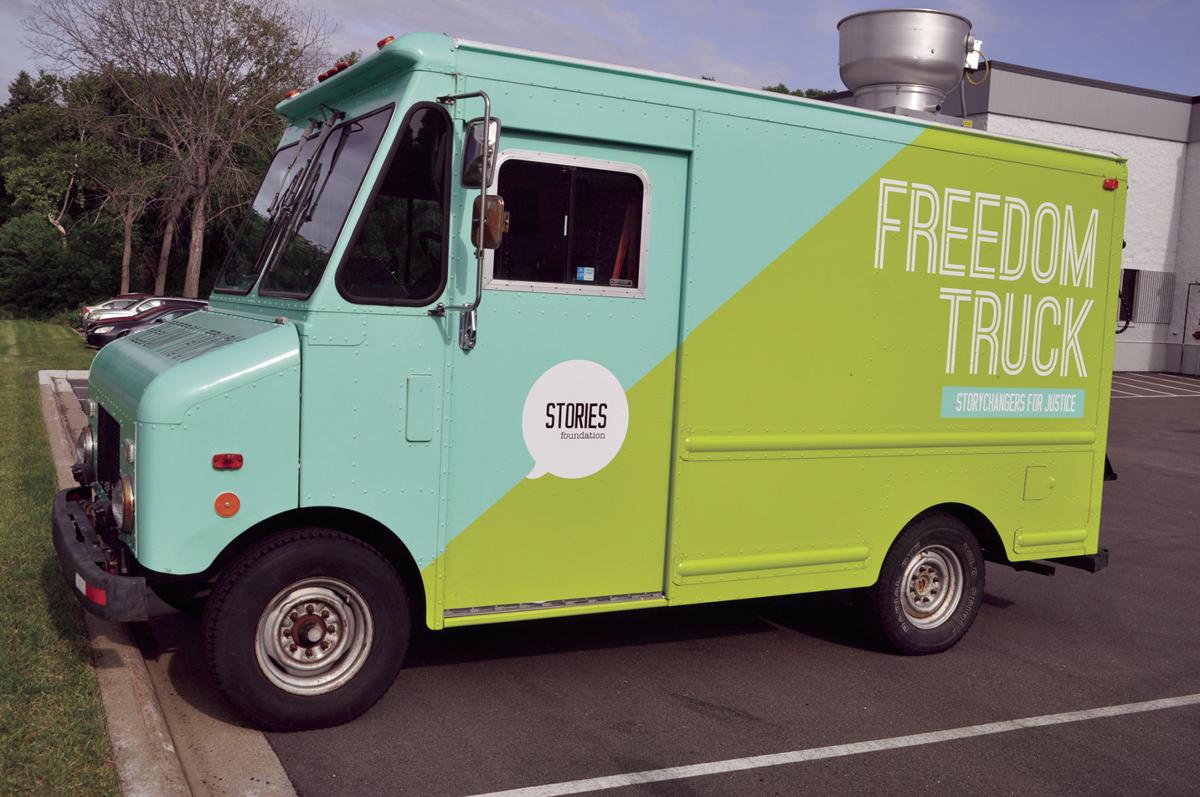 The bright blue and green Freedom Truck run by the Stories Foundation is a nonprofit food truck that raises awareness and fights human trafficking. 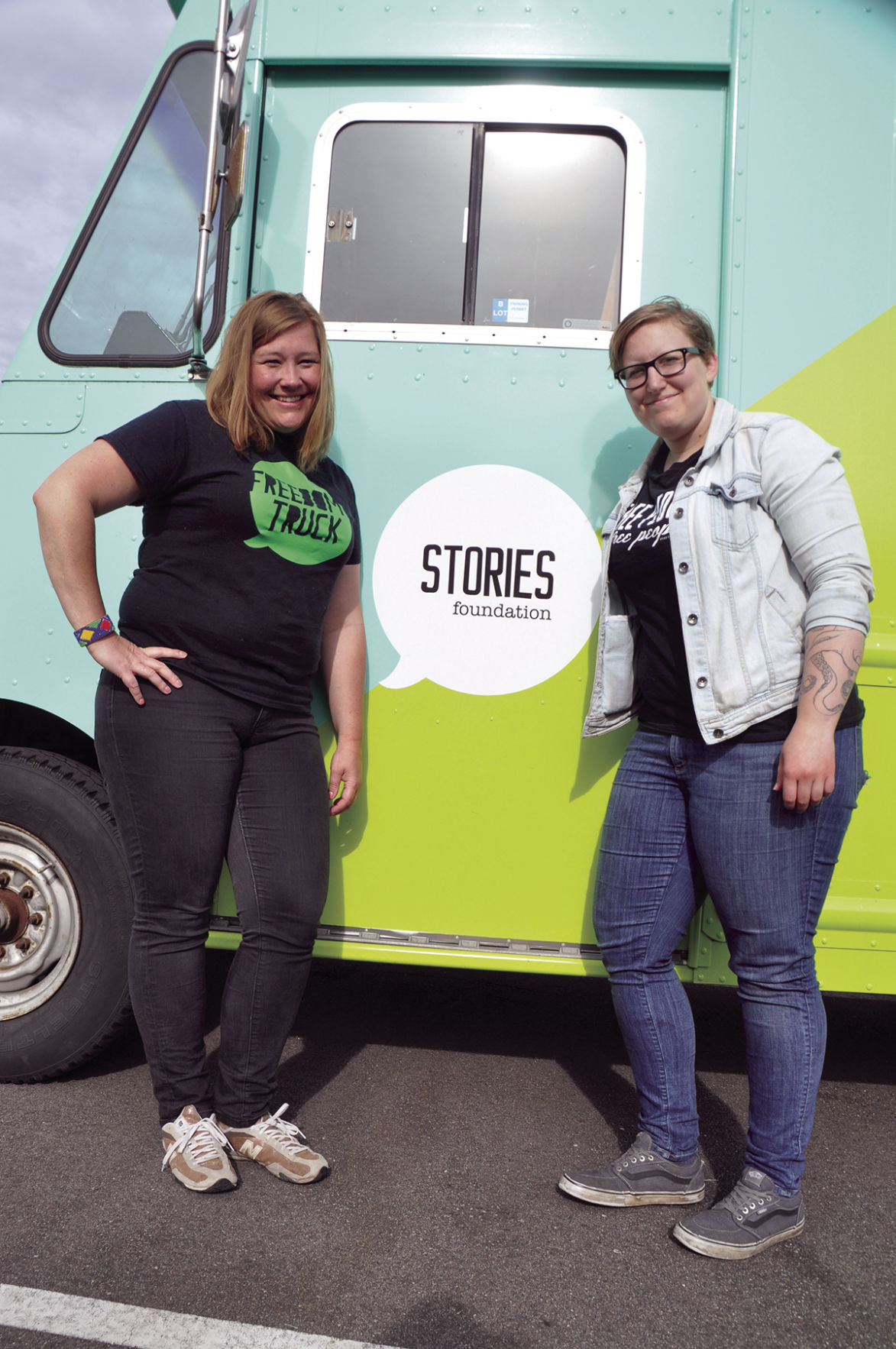 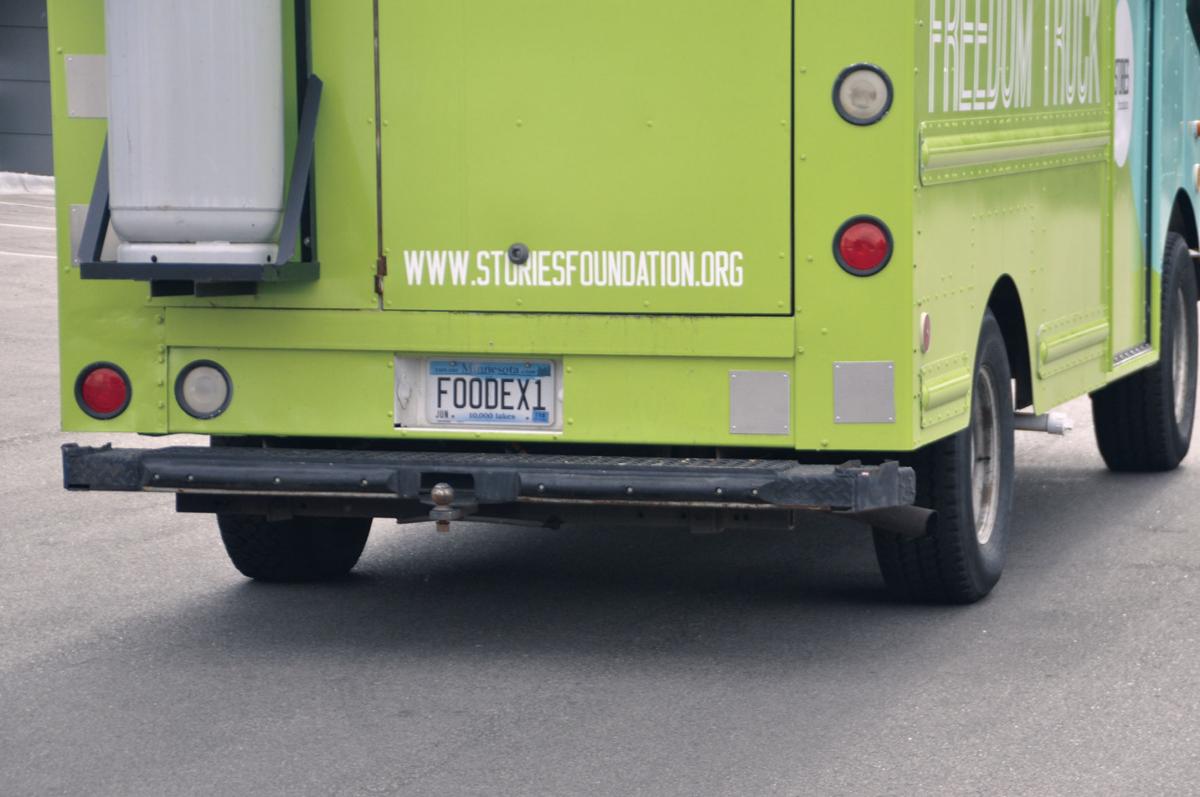 The truck’s FoodEx1 license plate will help identify the blue and green Freedom Food Truck, but the back door also directs people to the stories foundation website to learn more about the truck’s mission. 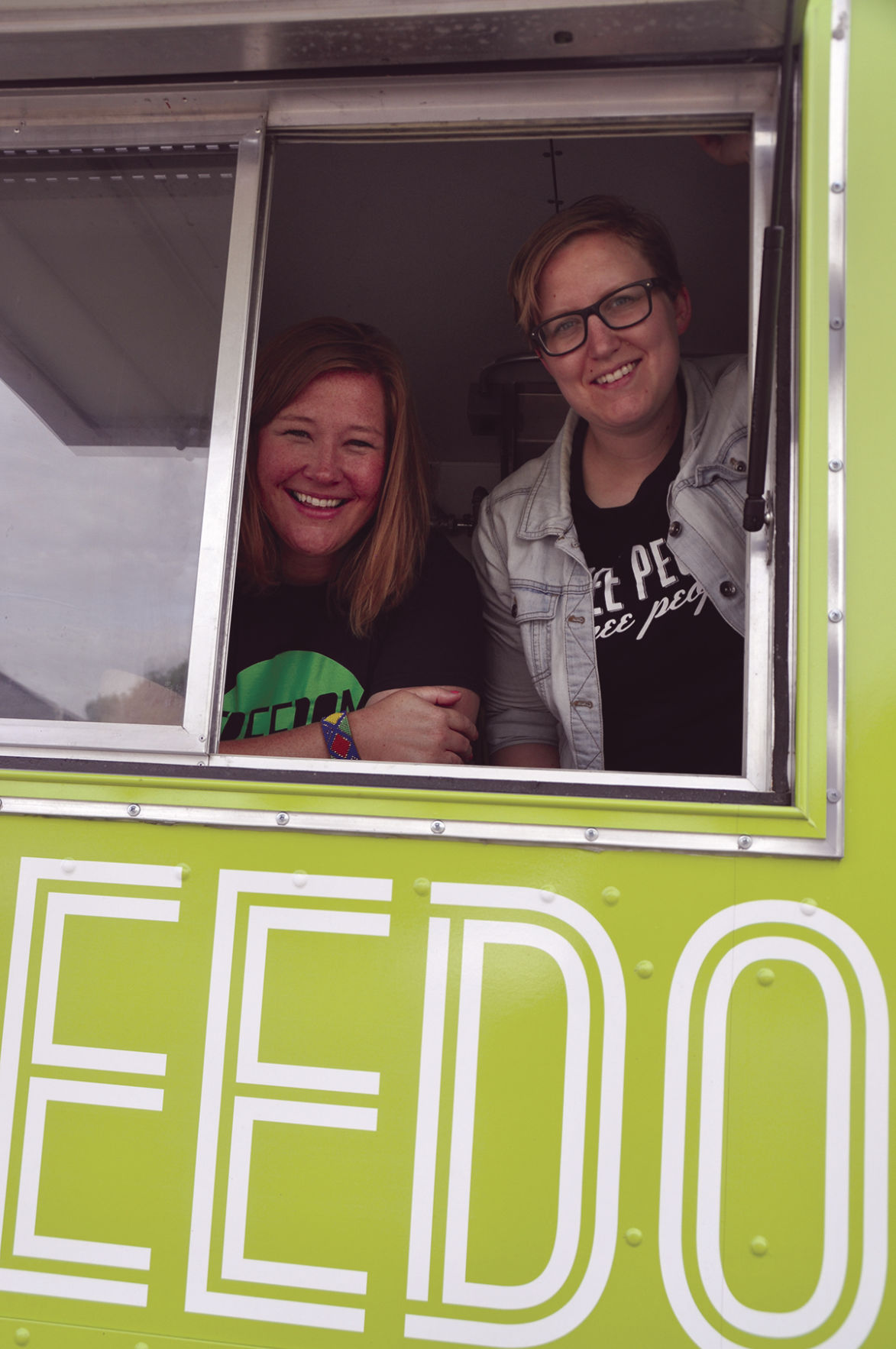 Stephanie Page and Ana Lena Copeland, smile from the window they serve falafel from the Freedom Truck.

The bright blue and green Freedom Truck run by the Stories Foundation is a nonprofit food truck that raises awareness and fights human trafficking.

The truck’s FoodEx1 license plate will help identify the blue and green Freedom Food Truck, but the back door also directs people to the stories foundation website to learn more about the truck’s mission.

Stephanie Page and Ana Lena Copeland, smile from the window they serve falafel from the Freedom Truck.

Human trafficking can be an overwhelming topic to broach in conversation, let alone activate change in. However, the new Freedom Food Truck is doing just that.

Originally of New Brighton, now Crystal local Stephanie Page, started the Stories Foundation in 2012 as a way to be a stay-at-home mom and still make a difference fighting for a cause that meant something to her – human trafficking.

The idea for a cafe and food truck grew from there, modeled after the Ebenezer Coffeehouse in Washington, D.C.. The coffeehouse’s proceeds go to local and international mission projects.

However, while the dream is a year-round cafe, the food truck was what the foundation members could started first; after a month-long fundraiser, of course, in April 2016.

“We were watching ‘Chef,’ the movie, and I thought, why can’t we do that for now,” Page said.

The movie is based on a chef who quits from a prestigious Los Angeles restaurant and launches a food truck business with family and friends.

Since that idea and the fundraiser, it will be one year at the end of June that the Freedom Truck has been actively serving food and education to residents and hungry people in area communities.

“We go anywhere people want us,” Page said. “And we connect people to the vision of how viable and how awesome it is to fight human trafficking.”

The truck asks for donations of $200 to $500 per event, depending on the number of people to feed. All proceeds from those who bought food are added to the original event donation and put toward local human trafficking prevention and assistance organizations in the Twin Cities.

“The common lie we tell ourselves is that we can’t effect change so why try,” Page said. “But you can make a difference, every little piece matters, every little bite.”

According to Page, sometimes people have to give others the opportunity to make a difference. For many individuals know they want to help, they just don’t know how or where to start.

“I think if we give the average citizen a simple way to help, like buying food, they’ll rise to the occasion,” Page said.

Most of the food sold from the truck is vegetarian, and dairy-free, and any meal can be made gluten-free as well.

“We serve food we just like to eat,” said Ana Lena Copeland, a vegetarian and food truck manager. “Most places don’t have good vegetarian options, I think because they aren’t vegetarians themselves, but we do, and without eggplants or zucchini or fancy stuff that some restaurants use instead of meat.”

The truck serves falafel in a pita wrap or salad bowl. The falafel includes fried chickpea patties, on a bed a spinach with purple cabbage slaw and barley, topped with pickled cucumbers, onions, tomato, hummus and garlic sauce.

“It’s real food, it’s good food and it’s simple food that doesn’t feel like you are eating healthy, but you are,” Page said.

They also sell two meat options, a pulled BBQ chicken, on a similar bed of slaw with the same cucumbers and onions and a garlic vinaigrette sauce, and a southwest pulled chicken, on that bed of slaw, with fajita peppers, onions and salsa.

Every meal is served with a side of choice, either sweet potato chips of falafel patties.

“It takes a lot of prep, but it’s all fresh” Copeland said.

“And the best part is anyone can make it,” Page said.

“You don’t have to go to culinary school to work in our truck,” Copeland laughed.

Which plays into the truck’s plans for fall.

In September, the Freedom Food Truck will start a partnership with The Link in North Minneapolis, where two survivors of human trafficking, in need of a part-time job, will come work for the truck.

“We provide the job and job training,” Page said. “And we hope to grow to include more people and different avenues of job training, such as marketing or business operations.”

Plus, if the year goes well for profits, Page and the foundation leaders are looking to hire four more people through the restoration program, a program of their own making.

“I never thought when I started that I would be working directly with survivors and safe houses,” Page said. “Now, I can’t think of a better way to make long-term change happen.”

This change that Page speaks of, is the fact that there are many programs and groups to get people out of human trafficking situations, or to prevent them from going into such situations, but not a lot that deal with what happens to the survivors afterward.

“There’s a hole in aftercare of these survivors that I hope we can fill,” Page said.

To fill that hole, Page has two visions.

First, she hopes to raise enough money to set up residence in a permanent building and work to be open year round.

To do this, the foundation will host the Stories Super Hero 5K in August. The run will be at Lake Normandale in Bloomington, with a goal of $100,000.

“We just want something we can keep going even when it’s cold,” Page said.

The organizers hope to find a building for the cafe in the Crystal and New Hope area.

At first, they had been considering the former Pizza Hut building on Bass Lake Road, but the right restaurant space is hard to come by and that opportunity was passed in the hopes of a better building that fits their needs.

“We not only want to provide jobs and job training, but our idea for the cafe is to include temporary housing quarters to help survivors get on their feet,” Page said.

The second vision is already in motion, using 10 percent of the food truck funds, Page has started to save for he own micro grant. This grant is a way to not just help survivors, but also give money to other organizations or individuals who may help her fill that hole in survivor aftercare.

“So far, so good,” Page said. “We are waiting for it to build up a bit more before we offer it.”

With 16 events last year, and even more scheduled this year, odds are good that it will be a grant offered in their second year of business.

Upcoming events include Just Faith Summit Friday, June 22, at Bethel University in Arden Hills, and Brew for Good Saturday, June 23 in Little Canada. The truck will also be at Bethel every Tuesday and is the foundation is looking for permanent spots to park for lunch and dinner hours around the northern metro area.

“Our goal is to be serving four times a week, whether events or just lunch and dinner rushes of 30 or more people,” Page said. “But we consider this our first real season, so we’ve got a ways to go yet.”

For more information, go to storiesfoundation.org/freedom-truck

Nice story about a great cause. Thank you for publishing.