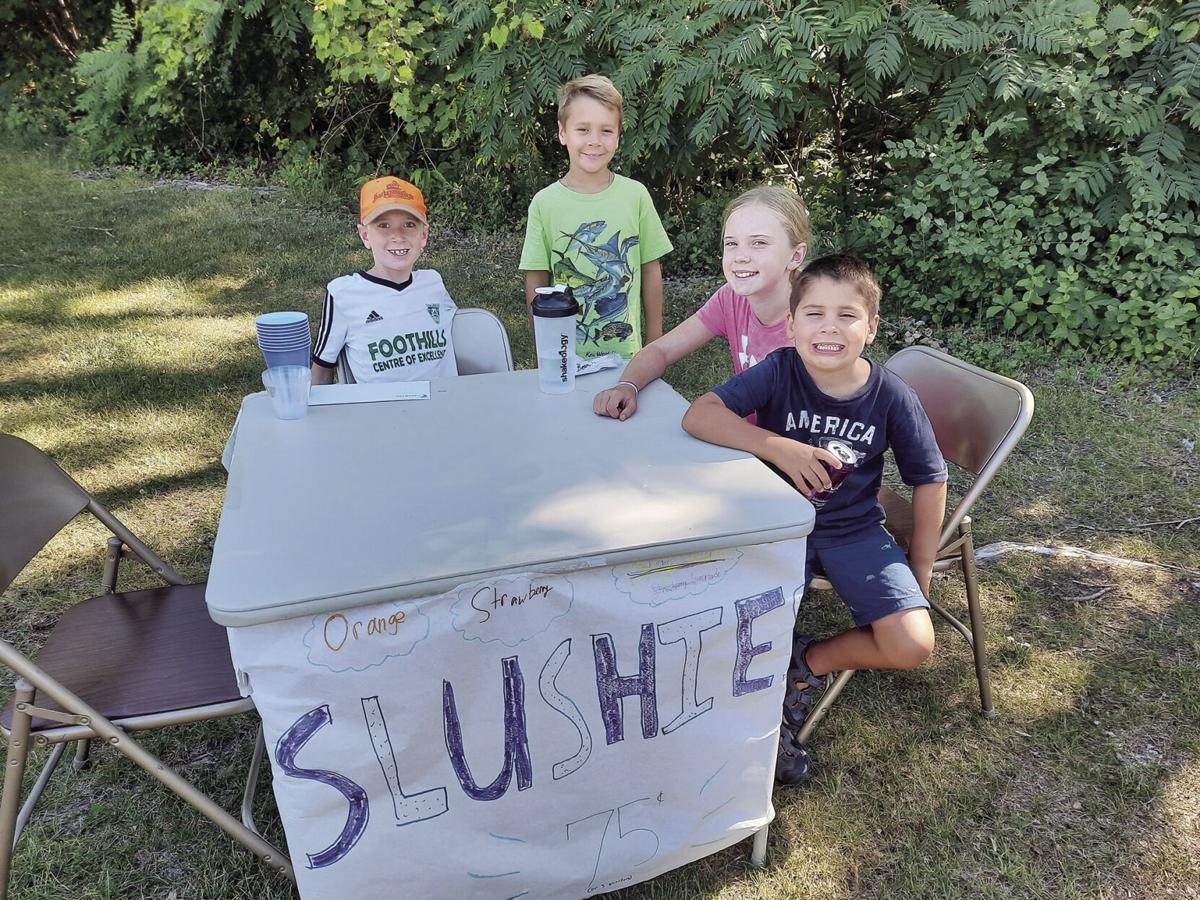 Nolan Williams, Daniel Christensen, Corinne Williams and Andrew Christensen get a photo with their slushie stand in Plymouth. The four agreed to give their earnings to Crescent Cove in Brooklyn Center. (Submitted Photos) 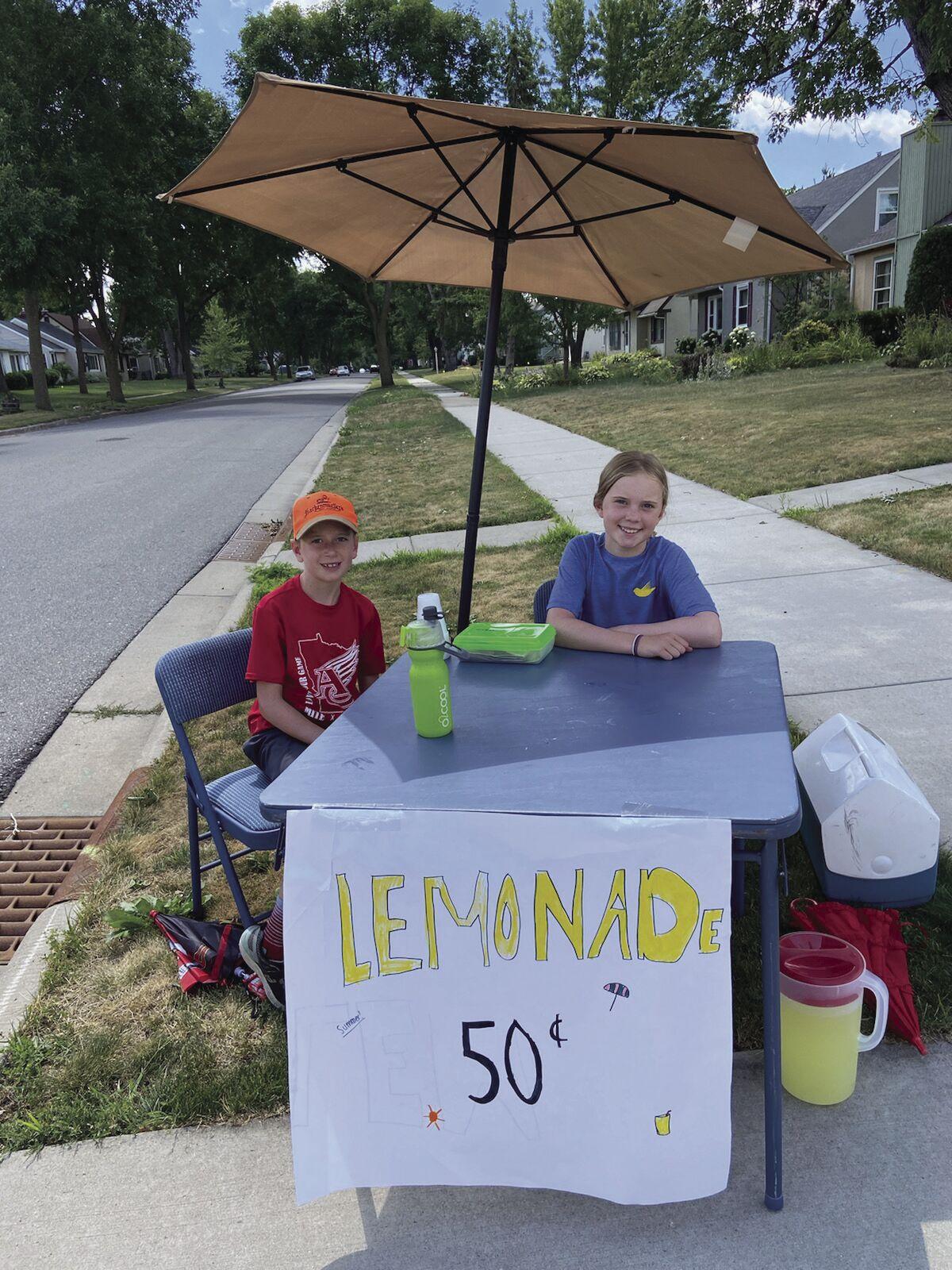 Corinne and Nolan Williams at their lemonade stand near their home on the intersection of Zenith and Lake Drive in Robbinsdale.

Nolan Williams, Daniel Christensen, Corinne Williams and Andrew Christensen get a photo with their slushie stand in Plymouth. The four agreed to give their earnings to Crescent Cove in Brooklyn Center. (Submitted Photos)

Corinne and Nolan Williams at their lemonade stand near their home on the intersection of Zenith and Lake Drive in Robbinsdale.

Corinne Williams has always had an “entrepreneurial spirit.” Her mother, Sarah Williams, said her daughter’s first stint to making a buck began at age 3 or 4. A toddling Corinne invited family members to an art gallery full of her own handmade work, priced according to what she thought they were worth.

“One was marked at $800,” Sarah said, and laughed. At the end of the gallery run, that particular piece remained unclaimed, but Corinne continued to expand her crafting skills and marketing efforts to her family. She’s sold little crafts to cousins for 50 cents. When the COVID-19 stay-at-home order took effect, Corinne threw herself into the world of hot glue art.

That’s why it surprised Sarah when Corinne told her brother and her cousins that their profits from a slushie stand would be donated to children in hospice care.

Well, not completely out of nowhere. Corinne’s aunt, Katie Lindenfelser, is the founder of Crescent Cove, Minnesota’s first children’s hospice and respite home in Brooklyn Center. It was at Lindenfelser’s Plymouth home where Corinne first broke the news to her fellow slushie stand employees, two of whom are Lindenfelser’s children, that their proceeds would be donated.

Lindenfelser said the decision was completely unprompted, and that she “had tears in her eyes” when she overheard Corinne’s statement.

“Corinne is a beautiful person inside and out and thinks of others, and I was deeply touched to hear her speak so passionately about the kids and families at Crescent Cove,” said Lindenfelser.

‘I just want to help’

Sarah said the family has been around Crescent Cove for all of Corinne’s life. Lindenfelser got the idea to open the facility around the time Corinne was born. In 2018, the home opened in what was formerly the North Memorial residential hospice on Bass Lake Road. Children with life-threatening conditions and their families come to Crescent Cove for respite and sacred care at the end-of-life.

“We’ve always been very forthcoming about death, and about kids and people who live with limitations and health challenges,” said Sarah. “We want to be honest with our kids in a practical and age-appropriate manner.”

While the family hasn’t visited Crescent Cove for a while due to the pandemic safety concerns, Sarah said her children have been to events supporting the opening of the facility all their lives and have voiced interest in volunteering at the facility when they are old enough.

Corinne said her reasons for wanting to donate were simple.

“My Aunt Katie runs it, and I’ve been there a lot,” said Corinne. “I just want to help the kids there that have life-threatening conditions.”

Lindenfelser said Corinne’s donation will go toward special opportunities and experiences for the patients at Crescent Cove, like nursing and volunteer care, music therapy and creative enrichment.

To date, stand proceeds have totaled $150, and Corinne and her younger brother have raised an additional $50. They have a goal of $500.

Where the stand is set up and what it sells is transient, as is understandable for an 11-year-old. The first stand sold slushies, but Corinne has also peddled lemonade from her family’s home in Robbinsdale.

Sarah said Corinne is allowed to set up the stand only if her brother is there to help.

“I told them there has to be two out there,” Sarah said.

Corinne has thought long and hard on how she can make her stand successful. She purchased a small batch of 2020 Minnesota State Fair commemorative cups to use to serve her product. She hoped that people’s longing for the canceled fair will draw in a few more consumers than if she was using any other plastic cup.

Corinne said her favorite part about running the stand is seeing people smile after they get their cup. Her least favorite is dealing with spills.

“Then I have to go inside and get a napkin,” she said.

The stand is also making distance learning an appealing prospect for the sixth-grader, who will attend Plymouth Middle School in some form or fashion this fall.

“I think it’s going to be easier,” Corinne said of running the stand. “I think we have school in the morning, which is good because we get a lot of customers in the afternoon.”

The lemonade stand will be open on the intersection of Zenith and Lake Drive periodically during this time that would be the State Fair. Those without a hankering for something sweet are invited to make a donation to crescentcove.org. Be sure to mention Corinne’s lemonade stand in the comment line.