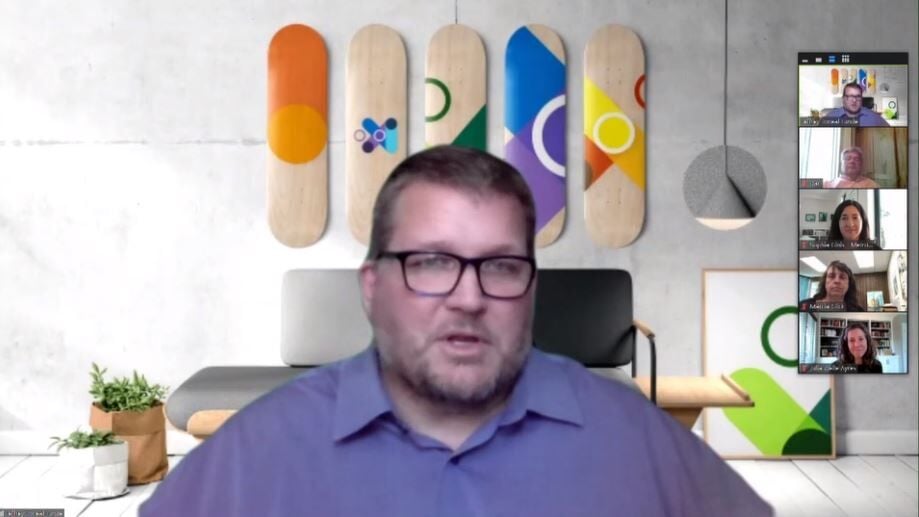 Displacement, construction impacts and timelines were reviewed at a May 25 virtual roundtable on the METRO Blue Line Extension, hosted by County Commissioner Jeff Lunde. The meeting was the first in a series of virtual programs planned by Lunde’s office on a number of topics.

The May 25 meeting was focused on the Blue Line’s impacts on Lunde’s District 1 constituents in Brooklyn Center, Brooklyn Park, Crystal, New Hope, Osseo and Robbinsdale.

Dan Soler, a Hennepin County administrator who has served as the Blue Line Extension’s project lead since 2015, said planners had a deadline to identify a community-supported route by the end of the year. When a route was recommended, he cautioned that every question and issue with the line wouldn’t be resolved.

“It’ll be more along the lines of, is this route worthy for continuing through a very long process that it will take to implement LRT?” Soler said.

The next steps include generating renderings of what the track could like along portions along the corridor currently being proposed by the project office; Soler said planners would “hone in on engineering” by July, beginning to answer questions about narrowing or removing road lanes to accommodate the rail, acquiring properties and navigating intersections and sidewalks.

Fitting the rail in Robbinsdale

Robbinsdale City Manager Marcia Glick was asked to review the concerns her staff has been hearing from residents since the new corridor was announced. Glick said a major concern was how the rail would fit into the community.

“Robbinsdale is the point coming from the north where things start to get tight,” Glick said. “Especially if you’re looking in the downtown area and thinking about if you need the additional width of a platform for a station, and you don’t even think the tracks could possibly fit because it looks really full right now ... So, we know we have an awful lot of work ahead of us.”

Other concerns Glick mentioned were the danger to pedestrians and the environmental change of Robbinsdale’s downtown from a small thoroughfare with a carefully landscaped boulevard to a shared space with a light rail system.

Soler said those questions were the same ones that planners were working on. He said the central focus of his staff is to ensure that the rail would make the area “equal to or better than what it is today.”

Housing along the line

This goal extended to displacement. Lunde asked the officials gathered to address the phenomena of people getting “priced out” of their homes where light rail is proposed even though they are the ones for whom the rail is most needed.

Julia Welle Ayres, the county’s housing development and finance manager, said affordable housing funds and other tools utilized by Hennepin County would be applied to station areas along the line.

“I would say I think that’s going to be a community-wide effort, a conversation with the neighbors and with the cities and amongst all the funders to think about what are the tools we have to be able to preserve affordability across those areas, and also respond to the economic development that is happening,” she said.

Glick added that Robbinsdale had a vested interest in preserving the city’s business district because the community is only 6% commercial. She said the city officials have been excited for light rail for decades, but also very worried how a several-year construction period would affect the increasingly robust downtown.

“If you impact the shopping centers, then what happens?” Glick said. “How do you keep that Main Street, Main Street during construction and everything else? How do you make it work when more and more what you see is ‘take out the commercial and put in apartments?’”

Lunde said he had also been hearing concerns about the impact to the tax base if residential-saturated cities like Robbinsdale lost more commercial business.

Soler said he had similar issues when light rail was added to University Avenue, which had “2,000-plus front doors.” He said efforts included the formation of a fund to plan and purchase signing for storefronts, allowing the roadway to remain continuously open and maintain accessible walkways and doorways. He warranted that construction was “not all rosy” for businesses, and the project office did what they could to “lift businesses up and get them through” the construction period.