Cornerstone Village, proposed by Bethesda Lutheran Communities, is planned to have 106 apartments for seniors and 24 apartments for adults with developmental disabilities at the intersection of Jefferson Highway and Decatur Drive. 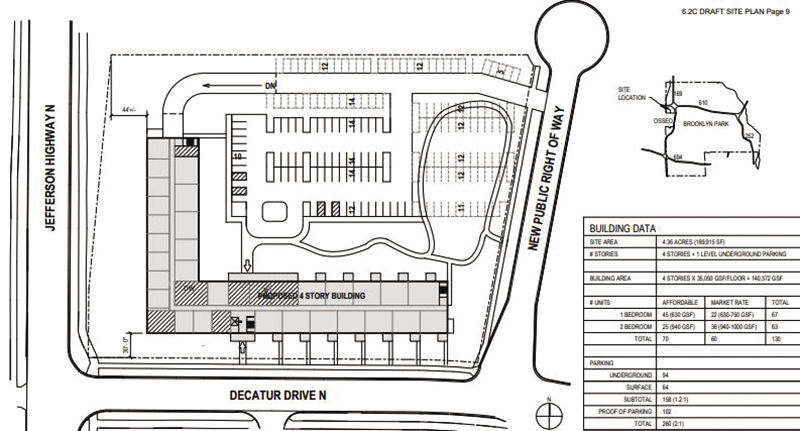 An overhead map of the site plan for Cornerstone Village.

Cornerstone Village, proposed by Bethesda Lutheran Communities, is planned to have 106 apartments for seniors and 24 apartments for adults with developmental disabilities at the intersection of Jefferson Highway and Decatur Drive.

An overhead map of the site plan for Cornerstone Village.

A proposed housing complex for seniors and individuals with developmental disabilities took a step forward after the Brooklyn Park Economic Development Authority offered support for the project through the use of tax increment financing.

That is, while the project has not been formally approved for construction, the Brooklyn Park City Council adopted a resolution approving the use of a deferred loan from existing TIF funds, as well as $2.35 million in tax increment financing for Bethesda Lutheran Communities to develop a 130-unit apartment complex at the corner of Jefferson Highway and Decatur Drive, south of Highway 610.

The resolution of support is partly intended to strengthen the developer’s application for funding through Minnesota Housing for housing infrastructure bonds. The show of local support increases the likelihood of bonds being allocated for this project. The council was unanimous in its approval for the proposal.

The general concept is proposed as a four-story, L-shaped building near the intersection of Highway 610 and Highway 169, but not directly bumping up against either highway. It would have a mix of 67 one-bedroom units and 63 two-bedroom units, with 94 underground parking spaces and 64 surface spaces. Units would incorporate aspects of universal design to accommodate people with varying physical abilities. This could include handrails, pocket doors, no-step showers and other mobility aids. Also featured in units are efficient lighting and plumbing fixtures, and smart-home technology.

Financing is split into two structures, one for the market-rate units, and one for the affordable units. Many funding sources are being pursued including housing infrastructure bonds, low-income housing tax credits, tax increment financing and Metropolitan Council Liveable Communities Demonstration Account funding.

Included in the request is the installment of a 19-year, $2.35 million tax increment financing pay-as-you-go district, as well as a $1 million deferred loan from the city’s existing affordable housing set-aside funds. The 30-year deferred loan would have no payments or interest over the loan period. Developers using tax credits as part of their financing structure often request that this style loan be forgiven or stay in the project when refinancing, and repayment is unlikely, so the city should treat this portion of the financing as a grant, city staff members said.

Councilmember Tonja West-Hafner said that while she likes the project concept, particularly the universal design aspect, it was not good public policy to offer the loan without interest.

“Deferred is fine, but the no-interest stuff, unless we’re going to put some kind of profit-sharing provision in there, I’m just not, I don’t really like that,” she said.

City staff members also said that the exact nature of the financial request could be changed as the project moves forward and other financing sources become more clear. This preliminary request is more about allowing the project to move forward in a stronger position for grants than a final form of the project’s finances, they said.

Councilmember Lisa Jacobson said she has heard good reviews for the developer and that she hopes Brooklyn Park residents are considered for jobs at the development. Councilmember Susan Pha also spoke in favor of the project its universal design elements.

While Mayor Jeff Lunde spoke to a need for affordable senior housing and investment in this project, it will be important to move forward at the larger, surrounding site with job-producing commercial development and not strictly housing.