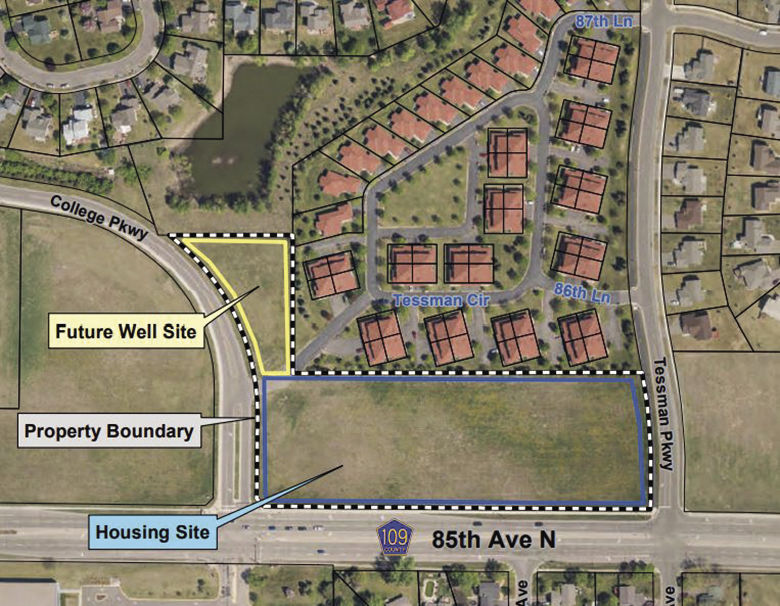 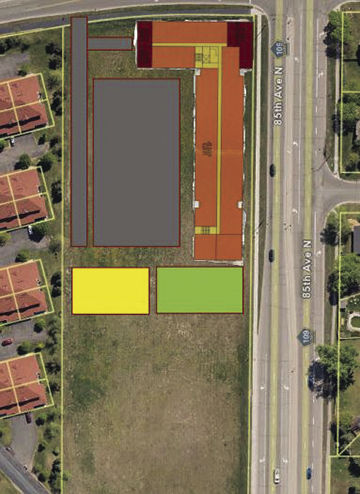 A preliminary view of the housing and child care elements of the proposal, which would be the first phase of development proposed at North Hennepin Community College’s surplus parcel. 75 housing units are proposed at the site. (Submitted image) 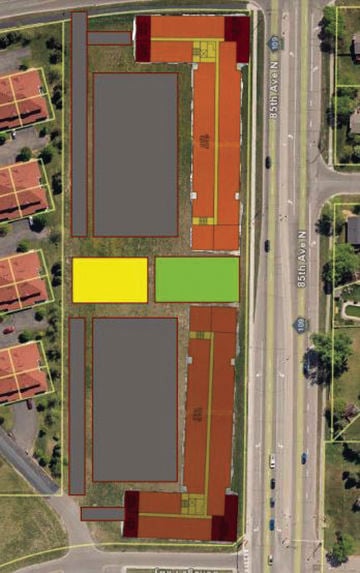 The fully built-out preliminary view of both phases of development at 6900 85th Ave. N. Duffy Development was selected as the developer for the site. (Submitted image)

The site is owned by the community college but has been deemed surplus land, and as such, Brooklyn Park has considered purchasing the land for development. The city’s operations and maintenance department has an interest in construction of a water well on one acre of the approximately six-acre total. As a result, the remaining five acres are a viable parcel for development.

Duffy proposed a two-phase development project. Phase one would consist of the development of a 75-unit apartment building, with a mix of one-, two- and three-bedroom units, and with 50-55 units utilizing 9% low-income housing tax credits. Another 20-25 units would be market rate. A day care co-op could either be incorporated into the housing or in a standalone structure. Phase two could result in the development of another 75 units.

In February 2020, the council, acting as the Economic Development Authority, authorized the city to enter into a purchase option agreement with the college for the land and has since issued a request for qualifications for developers that may be interested in developing an affordable housing or mixed-use development on the site.

A selection committee reviewed responses to the request for qualifications and recommended Duffy Development Company as the preferred developer.

The committee, consisting of three council members, five city staff members and a college staff member, felt that Duffy’s strong reputation, its overall proposal for the site – which includes both an affordable element and mixed-use design and a proposed partnership with a day care co-op – were the strong points of the proposal.

The proposal remains in its initial stages and would require a full financial analysis before moving forward. That said, the initial financial aspects of the proposal include revenue from a 25-year tax increment financing district, as well as grants, loan and tax credits from Hennepin County and Minnesota Housing. Projects often are required to apply over multiple years for these competitive programs.

The total preliminary proposed budget for the first phase of the project is $20.4 million, with $11.5 million coming from housing tax credit equity. The first mortgage would be at $4.4 million, while tax increment financing and fee waivers from the city would total $1.3 million.

The council was supportive of the proposal. Councilmember Tonja West-Hafner said that since the plan would meet the city’s design guidelines and general plan for the site, she was in strong support of the proposal.

Councilmember Terry Parks said he was excited to see the area developed, and Councilmember Lisa Jacobson said she was “very impressed” by Duffy Development Company.

Mayor Jeff Lunde said he liked the idea for the project but that he was keeping in mind the city’s commitment to spread affordable housing and multi-family housing across the city and not concentrate it in any particular area.

Requests for qualification were graded on a 100-point scale by the committee, with Duffy receiving 77 points. Following were JO Companies LLC and Lupe Development Partners with 73.8 points and Saturday Properties with 67.1 points.

Twenty points were available based on a developer’s experience and portfolio, as well as the ability to provide private capital and secure financing for the project. Reputation and references, overall vision and financial portfolio, and financial and staff capacity were awarded up to 15 points each. The ability to partner with local developers or service providers was awarded up to 10 points, and long-term commitment to the sustainability of projects through ownership was awarded up to five points.