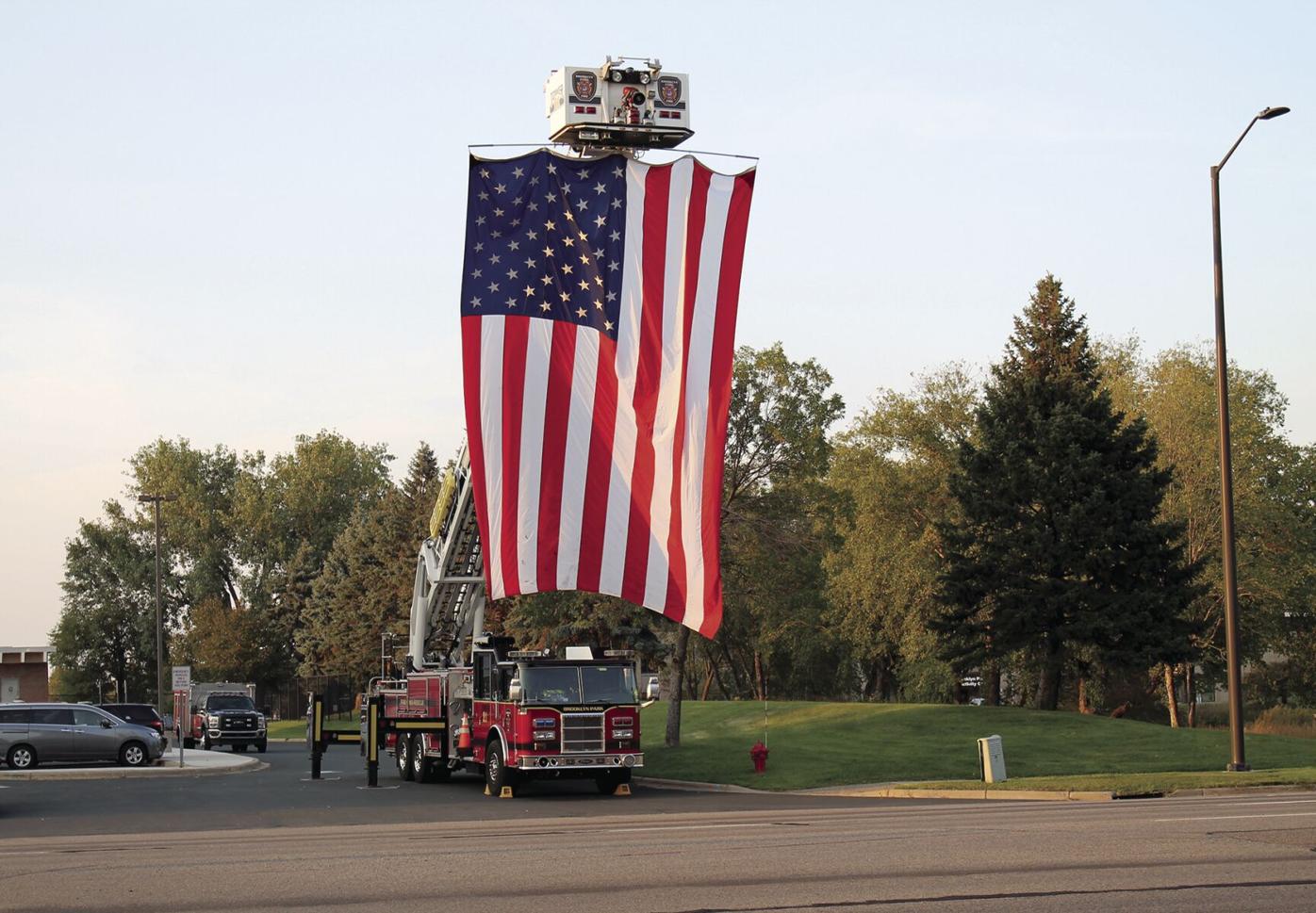 Brooklyn Park’s Fire Department flies a large flag outside of the Central Fire Station at Zane Avenue and 85th Avenue to honor the victims of 9/11. Fire Chief John Cunningham responded to Ground Zero following the terrorist attacks on the World Trade Center. 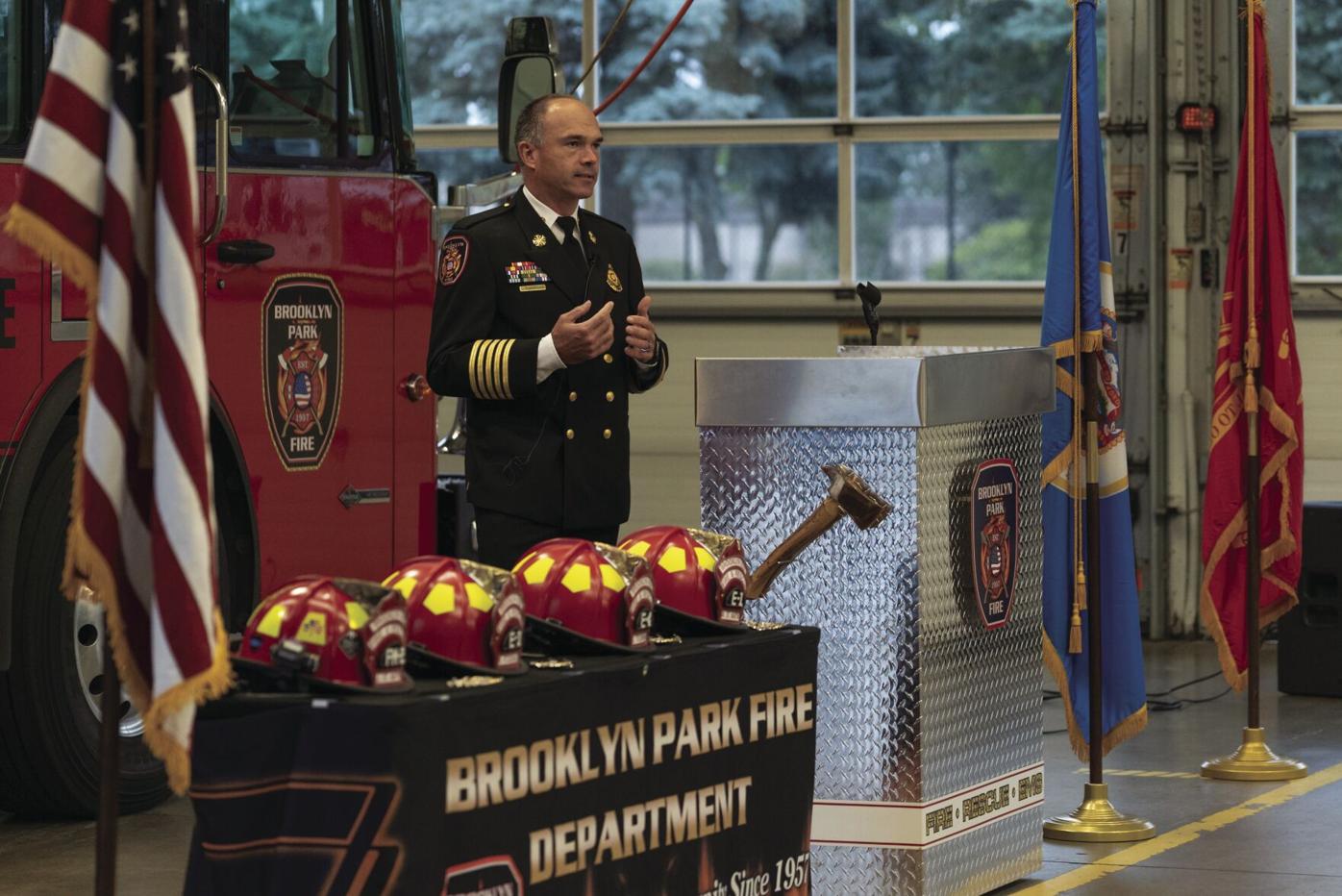 Fire Chief John Cunningham, shown here at a fire department ceremony in 2020, was working as a volunteer firefighter in Connecticut during 9/11.

Brooklyn Park Fire Chief John Cunningham was attending Fairfield University in September 2001, while also serving as a volunteer firefighter in his hometown of Greenwich, Connecticut.

A full time student, he was between classes when the first plane hit struck the World Trade Center the morning of Sept. 11.

When he arrived to class, he caught a news update when the second plane crashed.

After watching more news coverage, he got in his car and made the 30-minute drive back to Greenwich.

“I actually had radios in my car so I was listening to FDNY, NYPD, and the Port Authority on different radio frequencies, listening to them respond to this, what we all now know as a terrorist attack,” he said. “I was actually listening to the feed live when the first tower collapsed. That’s when I’m like, I’ve got to go. I need to get back to Greenwich.”

Cunningham was assigned to a unit specially trained in rescue work in Greenwich.

Many Connecticut-based departments responded to Ground Zero on the day of the attack, while Cunningham’s unit responded several days later.

“We met up with FDNY firefighters that we worked very closely with, actually a whole crew from Portland, Oregon that was able to get themselves out there,” he said.

Fire crews were still searching for survivors and victims of the attack when Cunningham arrived.

“We were put right in the middle of the pile, our crew,” he said. “We were on top of a pile that probably towered about 8 feet above ground, working actually on a highline rope that was stretched from one side of this large, kind of cliff structure of debris and metal, all the way to the other side to search for victims and to help bring (the) remaining back.”

Cunningham and the firefighters he served with at Ground Zero formed a permanent bond, he said, while some of their lives have been cut short due to health issues stemming from their service.

“The people that I met working there, they’re still some of my best friends today,” he said. “We keep in touch … we learned that Billy Quick, who was our kind of the team lead there who we all got to know very well, he got sick. He contracted cancer from working at the World Trade Center for months on end. And we all got together and flew out. Myself, I was in Minnesota at the time. So I flew back there to Greenwich and I met up with our contingent of guys from Portland. We went out to New York to go see Billy and cheer him up because he was just kind of bedridden and on oxygen, and just wanted to cheer his spirits up. We were able to get out there, and that’s what that friendship means. It’s a lifelong bond that was formed that day 20 years ago. Unfortunately, it wasn’t long after we left Billy that day that, I got the call the next morning that he passed away in his sleep that night.

“We hold onto the good memories, certainly, and we all share the bad ones as well,” he said of those friendships.

Initially, the experience reinforced Cunningham’s plans to enter public service. However, in the time that followed, he nearly left the fire fighting.

“Looking back, I think I suffered a very strong case of (post-traumatic stress disorder), not just 9/11 but I think just my career up until that point, several years in the very active fire service, unfortunately seeing the things that you see as a firefighter or in public safety, are things that most of the public, you hope will never see,” he said. “I gave up the volunteer fire service almost entirely.”

A friend recognized that he was having mental health issues, Cunningham said. “He said ‘John, I don’t know what’s going on but, are you OK, and just so you know, we miss you and we want you back.’”

It was at that moment that Cunningham sought counseling, and ultimately realized that he wanted to continue in public service.

He went on to graduate from a master’s program in homeland security leadership at the University of Connecticut and continued to work in the fire service.

He later ended up in Elk River serving as a fire chief, and now in Brooklyn Park. He is also President of the Minnesota Fire Chief’s Association.

“I want to make sure that future generations know what that day meant for our country, and especially the first responder community, but then to also create a bright future for the next generation of public service leaders, that many even today don’t know that they want a career in the fire service or public safety,” he said.

Cunningham said he wishes the country could return to the sense of unity that existed in the wake of the attacks.

“We need to remember the goodness that I know and I saw 20 years ago, and neighbors that were just helping complete strangers out,” he said. “People coming out of their homes and meeting their neighbors for the first time, building communities, and seeing through differences. And I can’t also discount the negative and some of the racism that we saw towards some of our Muslim communities that was so horrific and profiling that happened. But I think that we realized we need to be a country that is united by so many differences and that’s what makes our country great. I saw a lot of the best of the United States after 9/11 and I just wish that we could go back to that.”

Locally, the fire department has flown a large flag at the Central Fire Station at 85th Avenue and Zane to honor the lives lost during the attack. While Cunningham wasn’t sure where the flag will be located this year, it will again wave as a reminder of those events now 20 years gone.

The city’s new fire trucks are also decorated with the firefighter’s Maltese Cross, the words “Never forget,” and an image of firefighters raising the flag at Ground Zero. “We figured it was quite fitting that those trucks got delivered on the same year as the 20th anniversary,” he said.

“When we talk about the flag and why we display that, that’s our commitment as the fire service, never forgetting that day,” he said. “The common theme I think for those of us that have had some type of direct connection to the attacks that day, it’s still a very long event for us, and for many people in the United States. For a lot of people, it’s a very fresh wound that may never fully heal, and may never heal at all.”