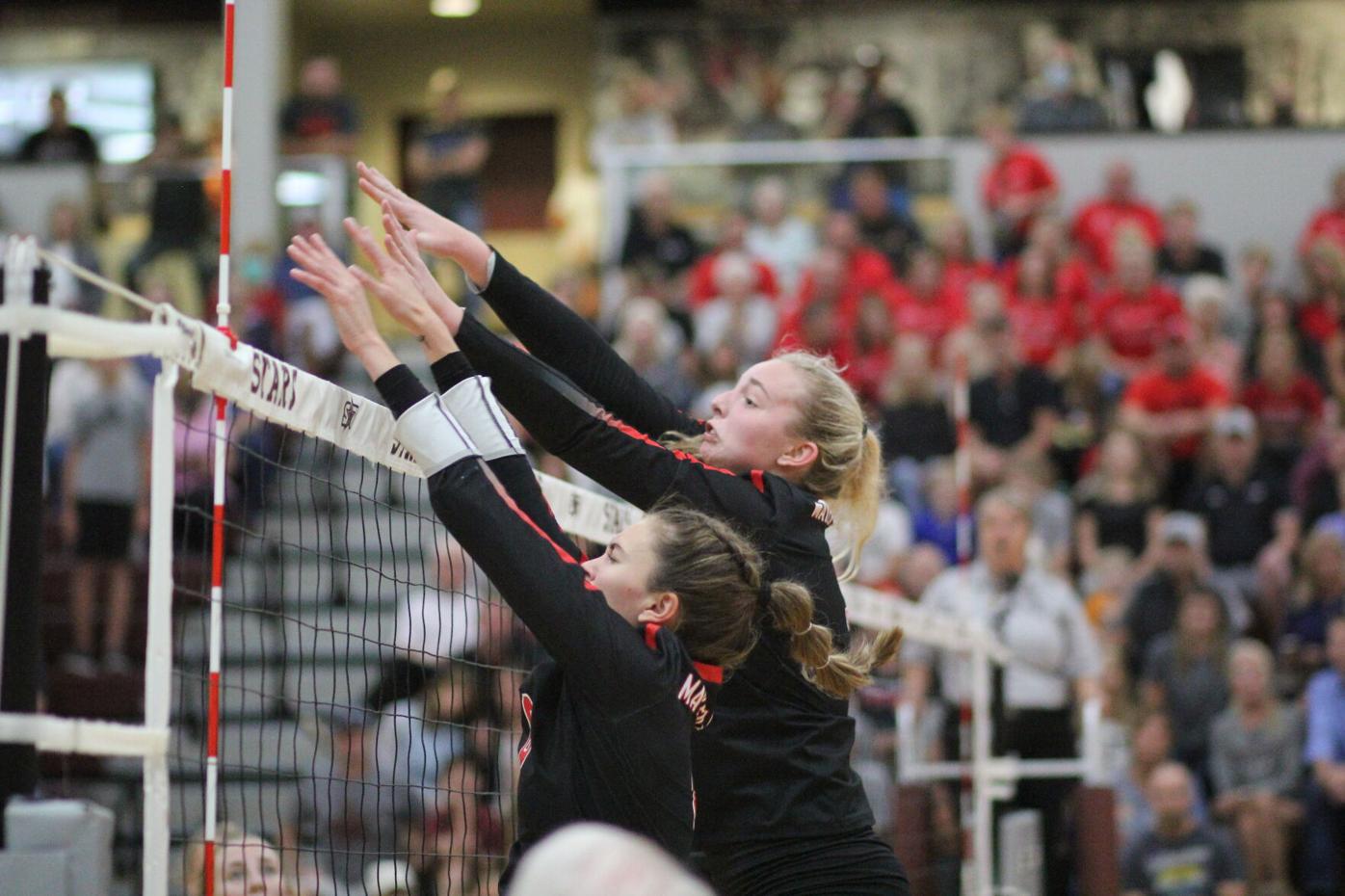 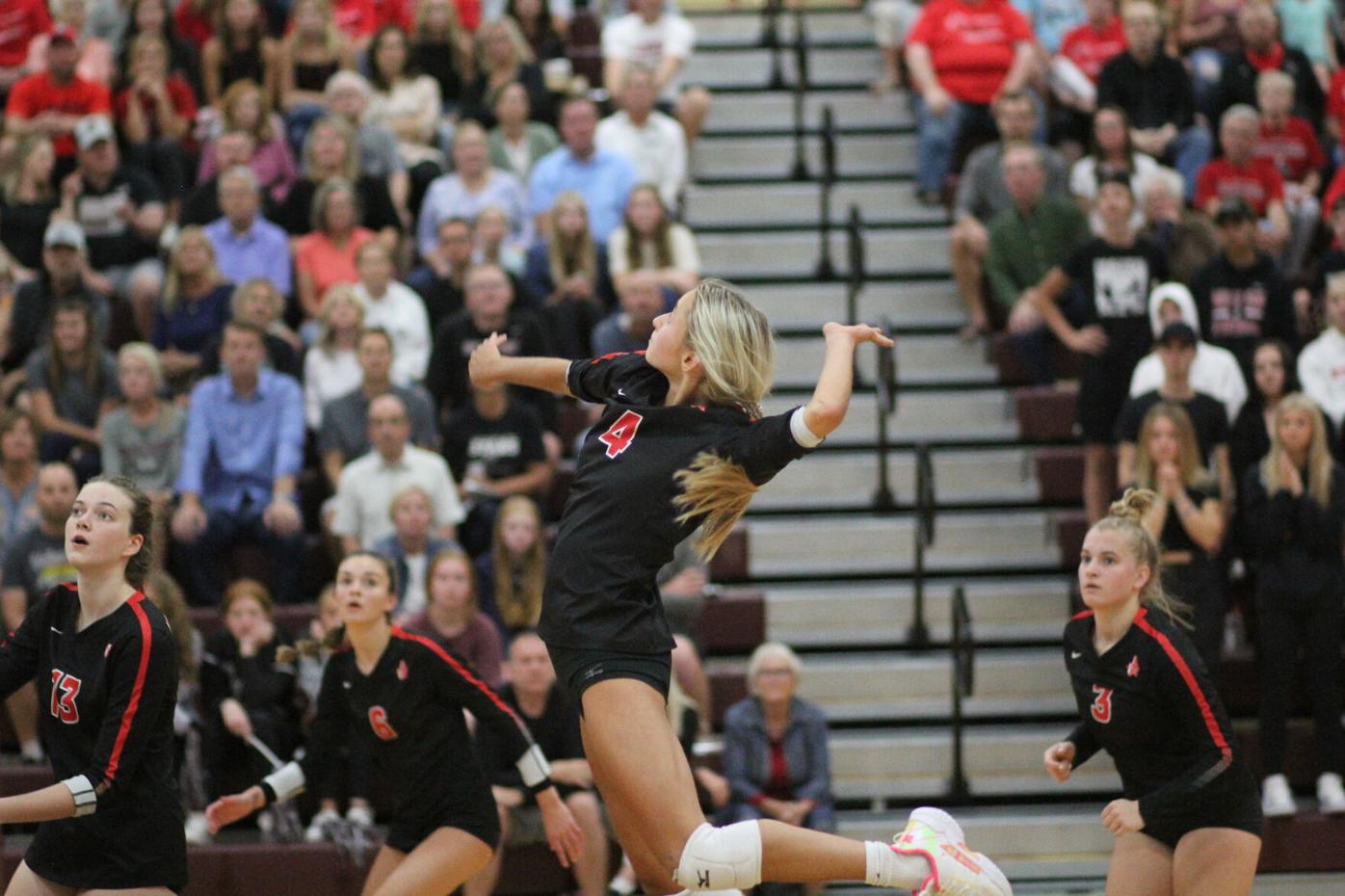 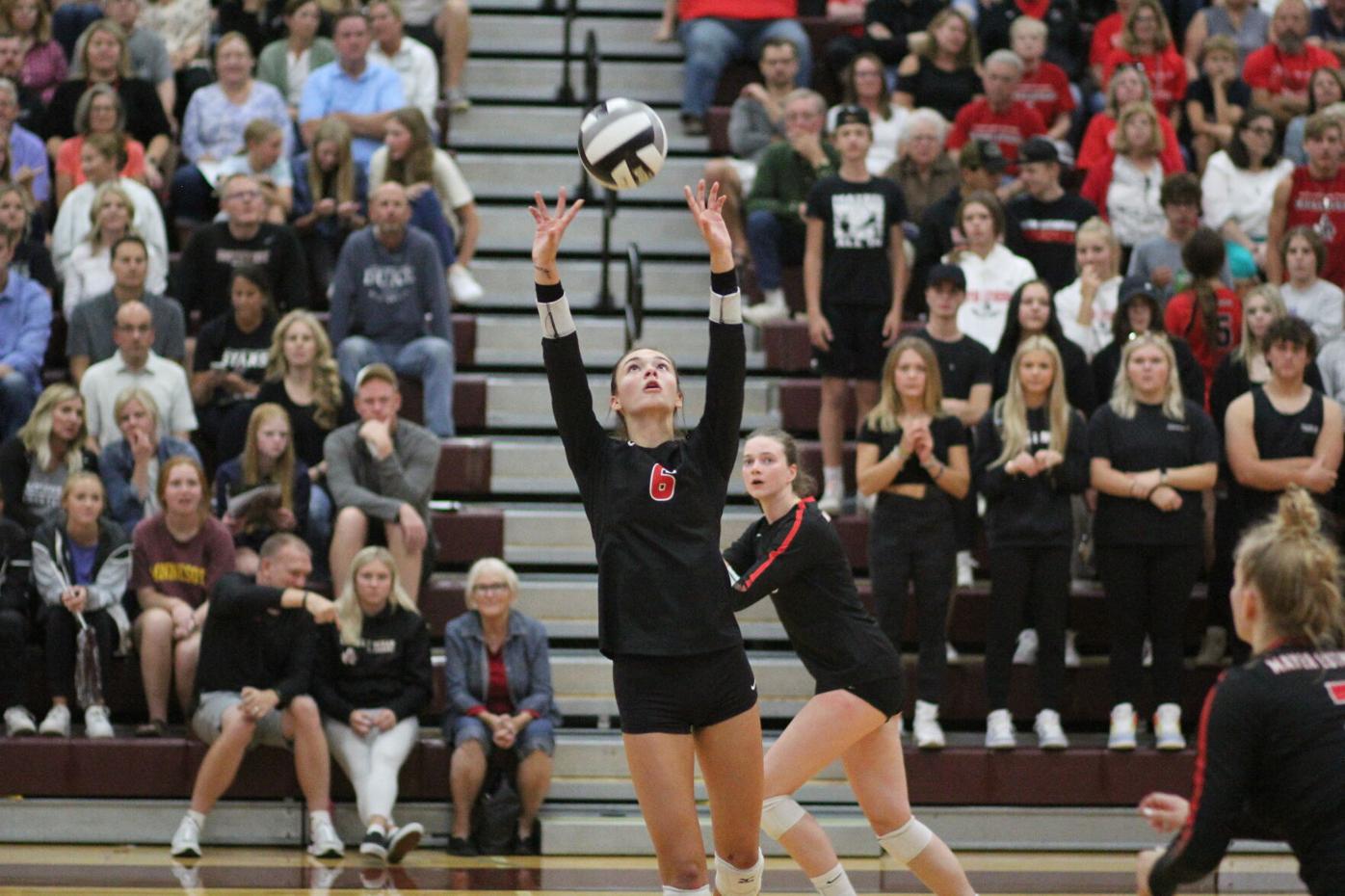 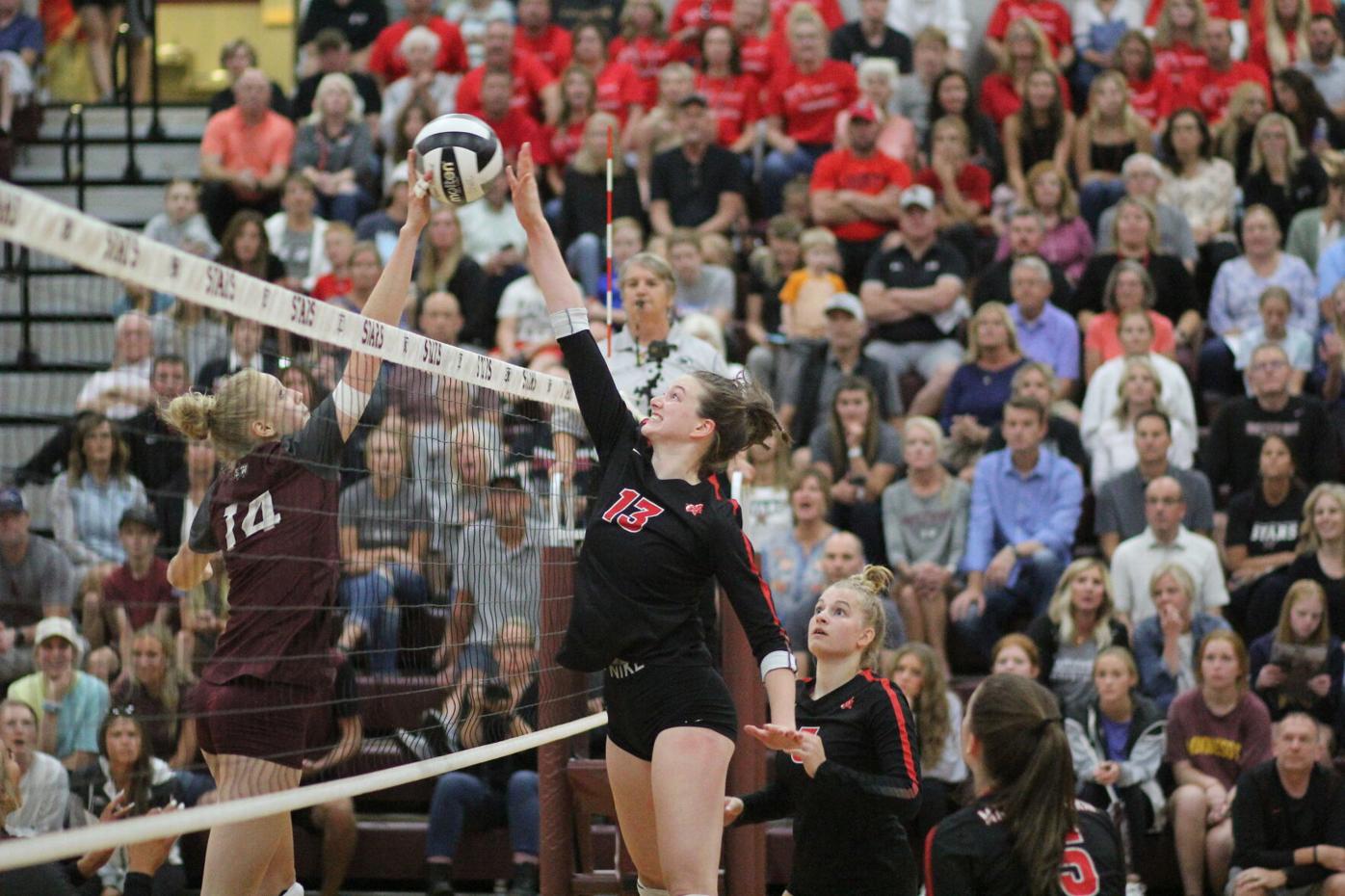 It was a full house at Southwest Christian Tuesday night, as two No. 1 ranked teams battled it out for a competitive five sets in a match that lived up to the hype.

“Great setting for the nights match up,” said coach Joelle Gimsley. “This match definitely had a feeling that this was going to be a game that would be a battle and like a postseason match.”

The undefeated Mayer Lutheran volleyball traveled to Southwest Christian for a thrilling match, and though the Crusaders did not pull out the victory, there were no losers Tuesday night as the two sides played at a very high level.

“We’ve always been wanting competition and this is what we got,” said Emma Lade. “Now we know for postseason games what we can do.”

The Crusaders started out a bit shaky in set one but pulled it around and played competitive volleyball for the next 15 points. There were many long rallies and exciting volleyball plays going on. The Crusaders only missed one serve and had a kill efficiency of over 300, but ultimately lost 25-19.

“Our defense and serve receive struggled a bit and kept us out of system many times in this set,” said Grimsley.

Set two was another battle, both teams were playing some great defense and the Crusaders kept a two-to-three point lead up until 14-14. Then the set went back and forth with some long rallies until the Crusaders grabbed the lead at 21-18 lead with the serve. Southwest buckled down and the Crusaders had several errors on their side of the net that got the momentum swing back to the Stars’ side – the Crusaders ended the set with three hitting errors and a blocking error in a 25-22 loss.

“End of the sets are very important to stay strong and consistent and we were not able to do that,” said Grimsley. “Lilly Wachholz led the team with six kills and Stella Maass had five to keep us going offensively. Brooke Sauter had five digs and Emma Lade had four. We felt like our serve receive was better this set.”

Down 2-0, the Crusaders who had only lost three sets all year dug in their heels and fought back.

“Well it is time to either fight or flight,” said Grimsley. “The Crusaders did not want to be in this position. Our goal was to start strong and have Southwest feel the pressure and see if they could fight.

“The Crusaders were playing smart, with fire and letting Southwest pay for being on their heels a bit,” said Grimsley. “We knew they would not roll over, that is for sure. As the set progressed the Crusaders let up and started to create to many errors on our side of the net again.”

The battle began again and Southwest tied it up at 22–22, the set went back and forth at 24-24 and then Southwest made two errors on their side of the net to give the Crusaders a 26-24 win.

“It shows how much trust we have in each other,” Lilly Wachholz said. “We know we’re fine, just one side out and we’re back to normal.”

As a team, Mayer Lutheran served 24-25, Stella Maass served 15–15, while Lilly Wachholz had five kills and five digs and Emma ran the offense with 13 assists.

In set four another battled brewed.

“Fire and fight again,” said Grimsley. “We would not expect anything differently. This set had some unbelievable rallies, that ended up going both ways. The Crusaders took a 17-13 lead with great defense and capitalizing on Southwest errors. All night we have played up and down, so we continued to do that and Southwest got right back into the set and tied it up at 20–20 and then it was a short set of who would create the most errors and who would get to capitalize.”

The rallies continued to be long with several opportunities to put the ball away. Finally, for the last rally, Southwest hit and ended the set with a net call. In the 25-22 set win, the Crusaders only had two hitting errors and dug 16 balls. Lilly Wachholz led with seven kills, while Gabby Wachholz and Madeline Guetzkow each had three kills.

The Crusaders jumped out to a great start in set five, creating an up tempo offense and picking up a lot of what Southwest was hitting their way. When the Crusaders were up 9–7 , the team had only created two unforced errors. Southwest started running a bit of a different offense and really pushed their middle.

“She did a great job up there and we were not able to answer,” said Grimsley.

The Crusaders created too many errors at the end of the match to finish the set off and Southwest played tough and put the ball down at the end on the way to a 15-11 win.

“The girls were up for the fight after starting off so slow,” said Grimsley. “It is very hard to come back after losing the first two sets, but they were right there and needed to get over the hump of playing up and down. I am so proud of this team for their fight and fire tonight and know that we learned plenty from this loss on our journey. The girls always look forward to the competition that Southwest gives.”

The Crusaders did not hang their heads after the loss, their first of the season, as they refused to give up after a 2-0 deficit against a No. 1 ranked team a class above.

“It just shows how much grit and heart we have,” said Lade. “We always talk about never giving up, giving 100 percent all the time and it really showed how we’re strong.”

A 17-0 start to the season is good, but the competition in some of the tougher games mean more to Mayer Lutheran than their record.

“This was helpful for us to learn what we need to do against these teams - it’s so nice to play competition like this to help us learn and build from it,” said Lilly Wachholz. “The big things we learned from this is to play consistent and to play without errors.”