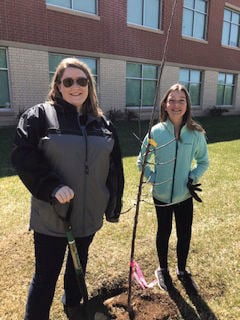 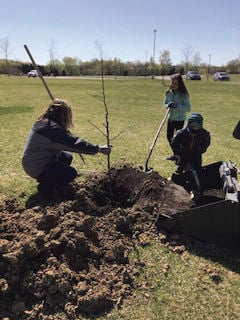 A is for apple…

That’s the start of the enduring elementary school alphabet rhyme.

And Laketown Elementary should have plenty of apples in future years thanks to a study project and tree planting completed this school year.

The project began in December in Tricia Heldt’s fifth grade homeroom class with a discussion about organic versus conventional apple farming practices. During the discussion, Mrs. Heldt mentioned that she would love to plant apple trees at school because they bloom in the spring while students are still in school and produce fruit in the fall when students are back at school.

One group of hard-working students took her comment to heart and began writing a grant proposal for apple trees to the Department of Agriculture, Heldt said. For Brooke Scholla, her excitement spilled over to a family gathering where she told her family members about the project.

Her cousin Larkin Scholla, a Waconia graduate and president of the South Metro Minneapolis Evenings Rotary Club, told her the Rotary club could sponsor the project. Brooke, with the help of other kids at school, wrote up a grant proposal to send to club leaders. Their letter resulted in $1,000 award for the students’ project and inspired the Rotary to start a new program where kids can write an essay stating how they would spend a thousand dollars.

“This essay program has the potential to help a lot of kids in need to reach their own dreams, and came forth all because one student was excited about an idea mentioned at school,” Heldt said.

Laketown fifth graders spent the winter meeting with Lin Deardorff, of Deardorff Orchards, learning about and investigating what apple trees would be best for this climate, and planning for their own apple tree planting. They ultimately decided on five Honeycrisp and four Red Regent apple trees.

Students wrote letters to school administrators asking for permission to plant the trees, and approached Mrs. Heldt’s husband with a letter asking him to dig the holes with his skid loader.

The coronavirus and closed classrooms prevented a class tree planting event, but Brooke Scholla and her cousin were able to help plant the trees this spring.

Heldt said she is impressed that one group of kids took a teacher’s off-hand comment and found a way to ensure that the trees were planted.

“These students’ dedication and the support of the community means that Laketown students will enjoy and learn from the apple trees for years to come.”