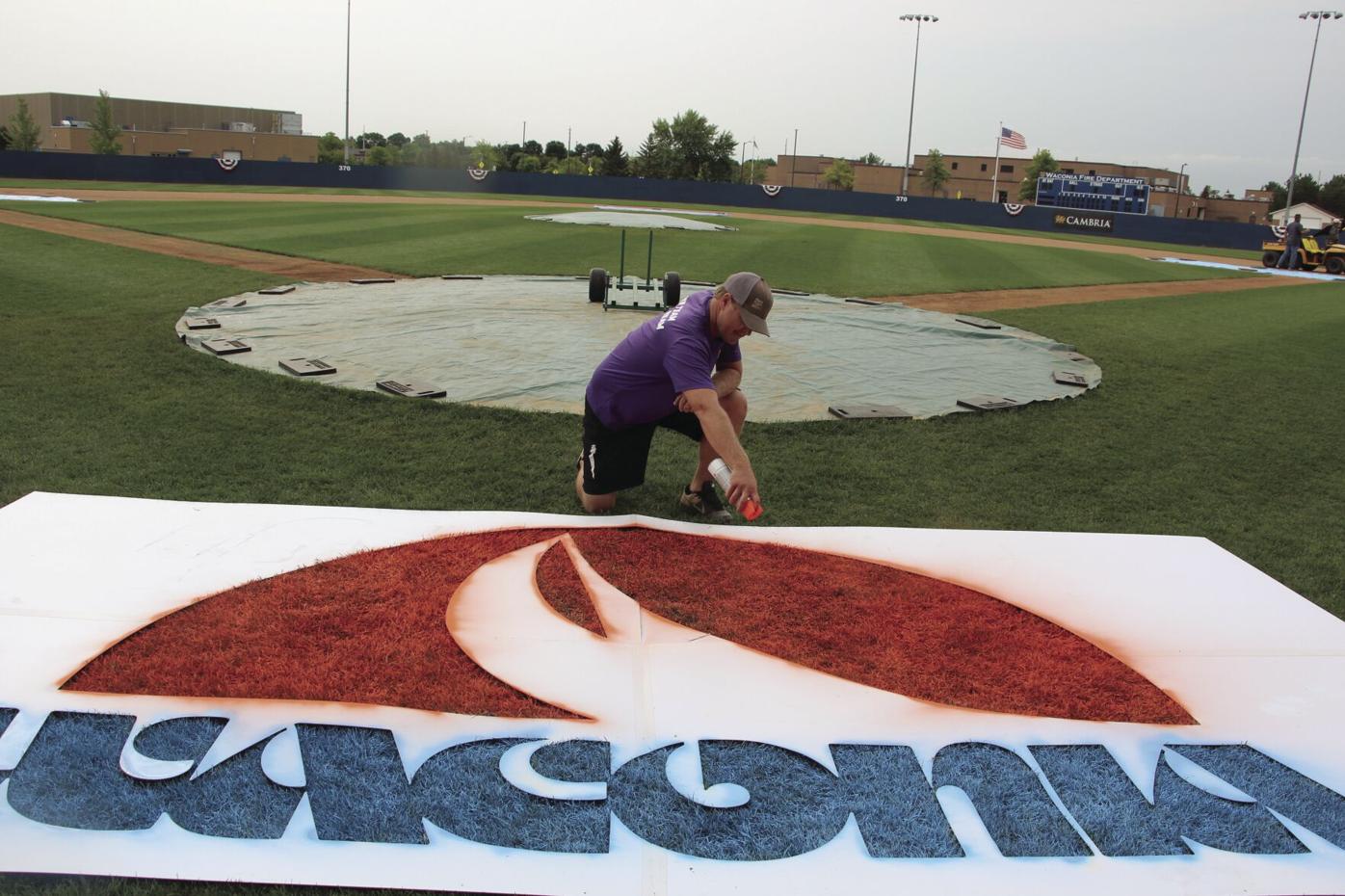 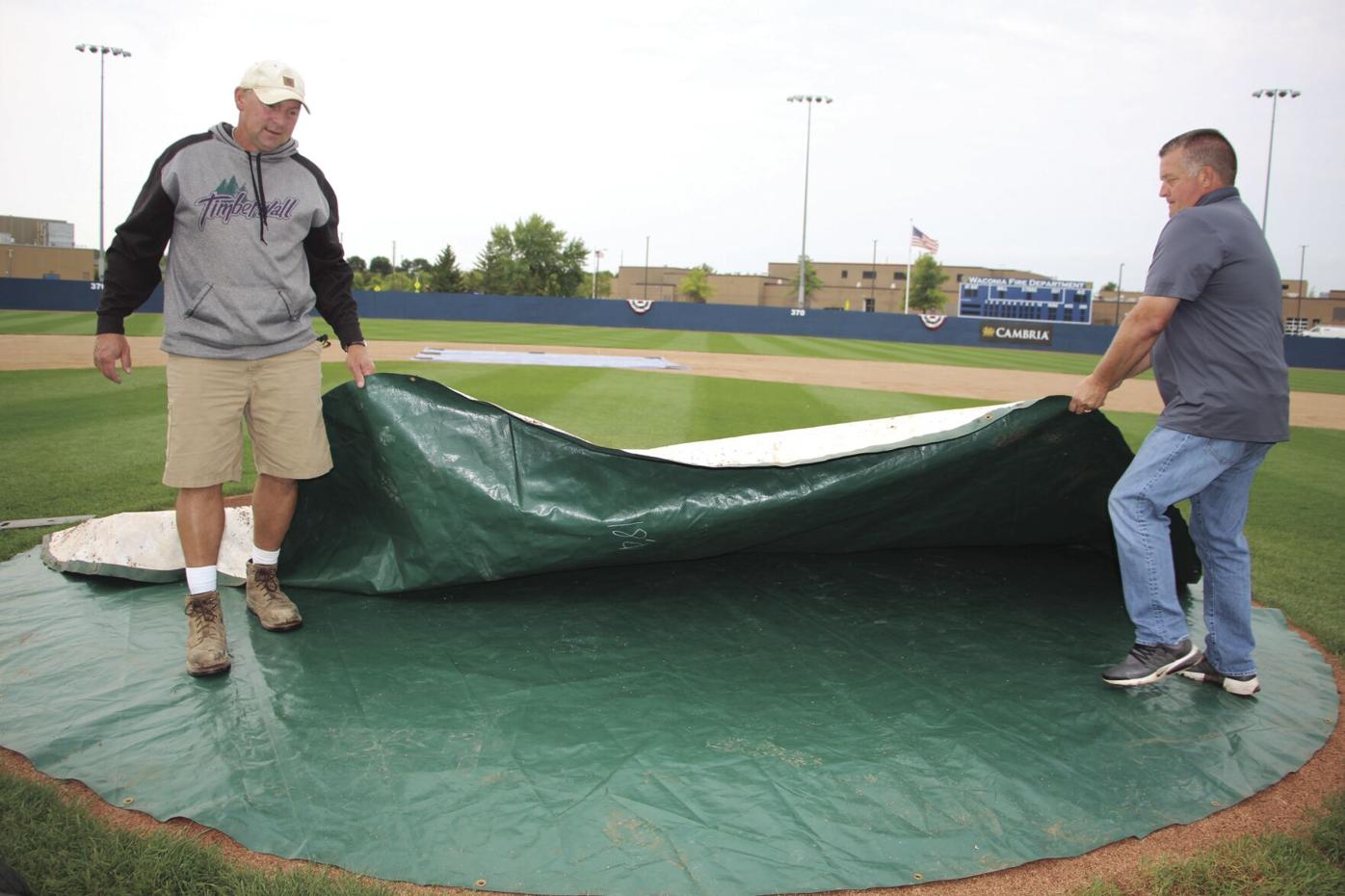 Imagine tending to a 4-1/2-acre lawn that has to be immaculately manicured for the entire spring and summer.

That’s what LeRoy Hendricks and Mike Schultz have been doing at Waconia’s Lions Field since the start of the high school baseball season last spring, and now for the Minnesota State Amateur Baseball tournament that runs through Labor Day.

That tournament has put the field in the spotlight for three weekends and 25 games. Lions Field has hosted other tournaments as well this season, including the Gopher Classic American Legion tournament, which involved 15 games over three days, Hendricks notes.

Tournaments like these create additional challenges in preparation, the pair explain, especially this year with a drought-stricken summer followed by an onslaught of rain the past two weekends.

The grounds crew poured on “lots of water” this season, plus some 400-500 pounds of cover seeding and 800 pounds of fertilizer to keep the field green, Schultz notes. He can’t even guess how many gallons of water the crew applied.

But Schultz does know that grounds crew volunteers rolled, sponged and sucked some 3,000 gallons of standing water off the field after frequent rains over the past weekend to make it playable.

Six individuals are part of the core grounds crew. Some 10-15 volunteers will pick it up when the all-points bulletin goes out, Schultz said, and Waconia’s own team the Lakers will even step in to assist.

Hendricks and Schultz started to tend to ball fields some 10 years ago when their own sons were age 11 and playing metro baseball.

“We just wanted them to have a nice field to play on,” Hendricks said.

The dads persevered in their task as their boys played through high school, including a state championship season, and exude a passion that continues even today. And it’s not just the field that gets their attention. Often, they are the first ones to arrive and the last ones to leave, so they also find themselves tending to restrooms and other parts of the ballpark as well.

Hendricks has his own landscaping business, Outdoor Living & Landscaping, so work and baseball intertwine. Schultz, a Chaska native, cut his field landscaping teeth at Chaska Athletic Park, an iconic ballpark and another tournament host along with Hamburg.

While fans watch the finer points of the game, Hendricks and Schultz are looking at the fine points of the field, like keeping a tight, straight edge on the infield grass, smooth dirt surface and finely chalked lines.

Schultz admits laughingly that it bugs him when a batter wipes out the back line of a freshly chalked batter’s box with his back foot. Also, when pitchers come off the mound to retrieve the ball from the catcher. That creates a worn spot in front of the mound that the crew has addressed with a fresh section of sod.

And while players compete against each other, Hendricks and Schultz point out that the grounds crews from other communities come together even as each takes pride in their own ballpark.

For example, Cole Flick from Dassel, Minn., who is an expert in grass cutting, has helped with the pattern that gets laid down in the outfield. Meanwhile, some surfacing equipment comes courtesy of the crew in Victoria, whose team is competing in the Class B tournament.

While tending to the ballpark yard these past few months, Hendricks and Schultz admit that their own yards and household duties have been neglected. They can maybe get to those now that the Class C championship game has concluded.