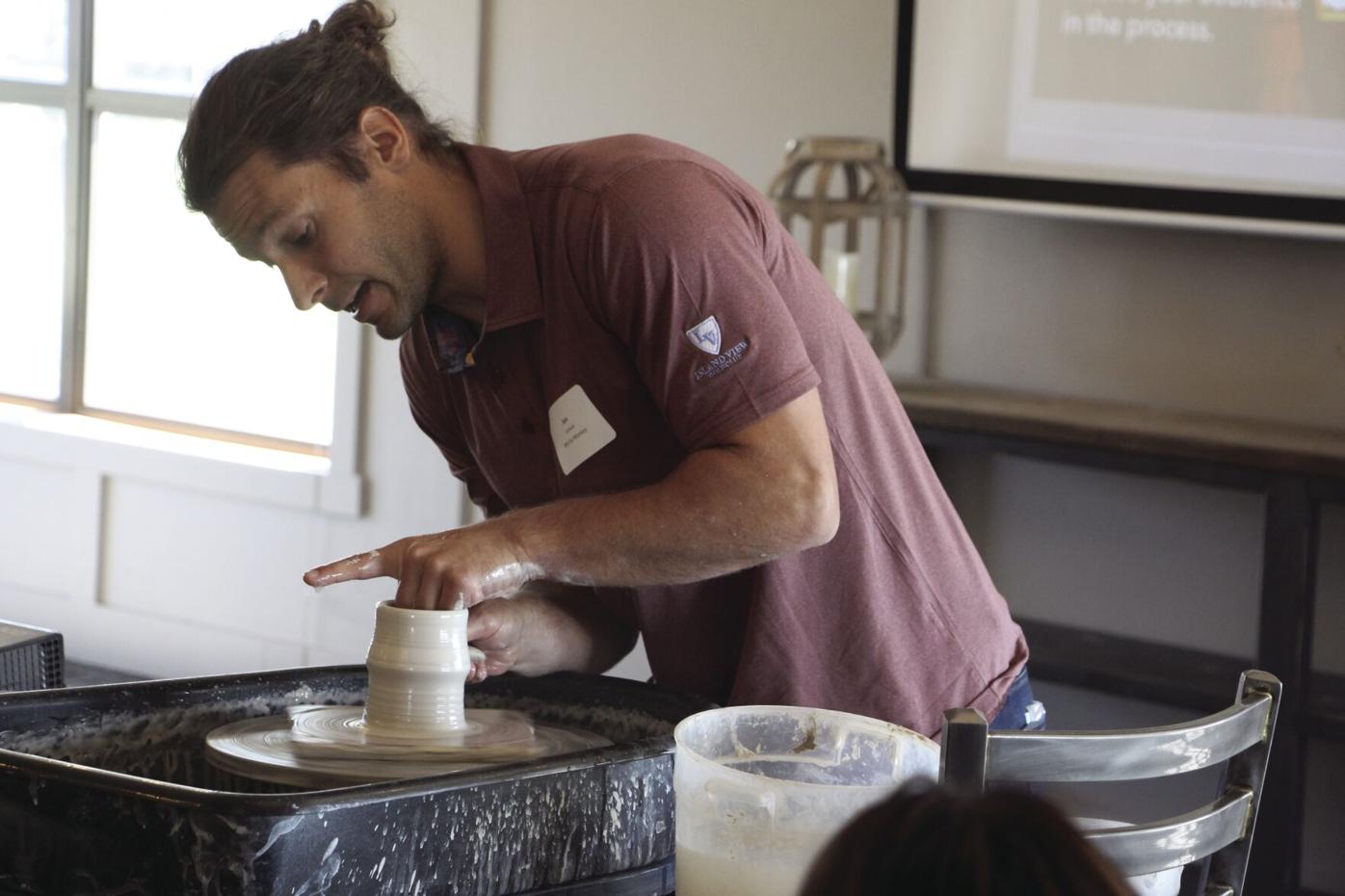 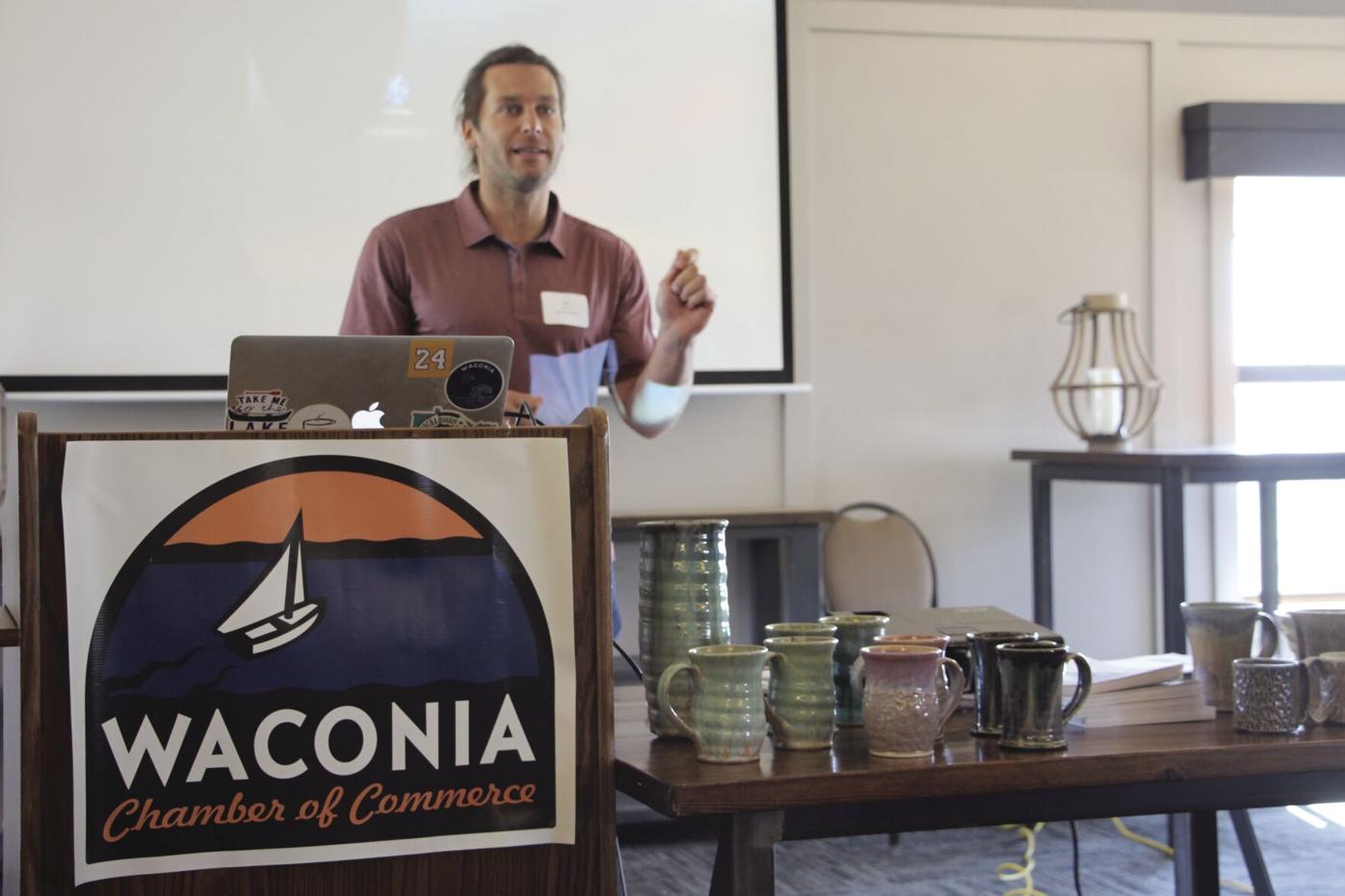 Visitors to Mocha Monkey coffee shop locations in Waconia and St. Bonifacius likely have seen the creations of Jon the Potter on display there. Now his pottery is reaching a much broader following on You Tube and other social media channels.

Local artist/businessman Jon Schmidt traced the story of Jon the Potter for other business professionals recently at a Waconia Chamber of Commerce luncheon -- and threw a couple pots on a potter’s wheel at the same time.

Schmidt has successfully combined a management degree and passion for pottery into two burgeoning businesses – coffee and clay.

His story began just over 10 years ago as a senior management student at Gustavus Adolphus College, starting to dabble in pottery, when he first visited Mocha Monkey on South Olive Street with is mother who wanted to show him the pottery on display at the downtown coffee shop after he had given her a piece of pottery for Mother’s Day.

He was captivated by the concept and soon was working as an employee at Mocha Monkey. When the owners decided to sell, he decided he want to become sole owner.

“I had no assets, no collateral and no experience,” Schmidt said.

A half-dozen banks rejected his loan application, but one took a chance when the former owners agreed to help back him. The coffee business has since flourished into three locations, including a drive-through and sit-down space at HomeTown Bank in Waconia, and what had been a struggling coffee shop location in St. Boni.

Diversify was Schmidt’s message to the Chamber audience.

While the downtown location lost 75 percent of its business during the height of the pandemic, the drive-through did extremely well. Business is bouncing back now at all three locations, he said, and success with the coffee shops has enabled him to diversify further into his passion for pottery through online sales and as an influencer on social media.

“How many people in a community of 14,000 are going to pay $20 to $25 for a piece of pottery when you can buy one for four dollars at Target,” Schmidt asked.

Not many, he decided, so he took his business online through a series of videos on a “JohnThePotter” YouTube Channel.

“There are lots of potters on Facebook and Instagram,” Schmidt said. He wanted something unique – and the YouTube channel was free. He uses the platform to “instruct, inspire and entertain.”

Again, he had little or no experience when he started.

“The first videos weren’t very good,” Schmidt admits. But they attracted attention. He even shared his pottery mistakes on video and steadily engaged followers.

Subscribers grew from zero to 10,000 in his first year, and from 10,000 to 100,000 in the second. His YouTube channel now has 175,000 subscribers and Schmidt has 70,000 followers on Instagram – an investment that he parleyed into pottery sales and growth of the business.

His online showroom re-stock sales sell out quickly and a Kickstarter campaign enabled him to build a new custom studio. Jon the Potter also sells other merchandise and has sponsorships for his clay and glazes. In addition, he generates revenue through online membership platform Patreon and is compensated for video views via Google AdSense.

“It’s about knowing the artist,” he said, “and being part of the story.”