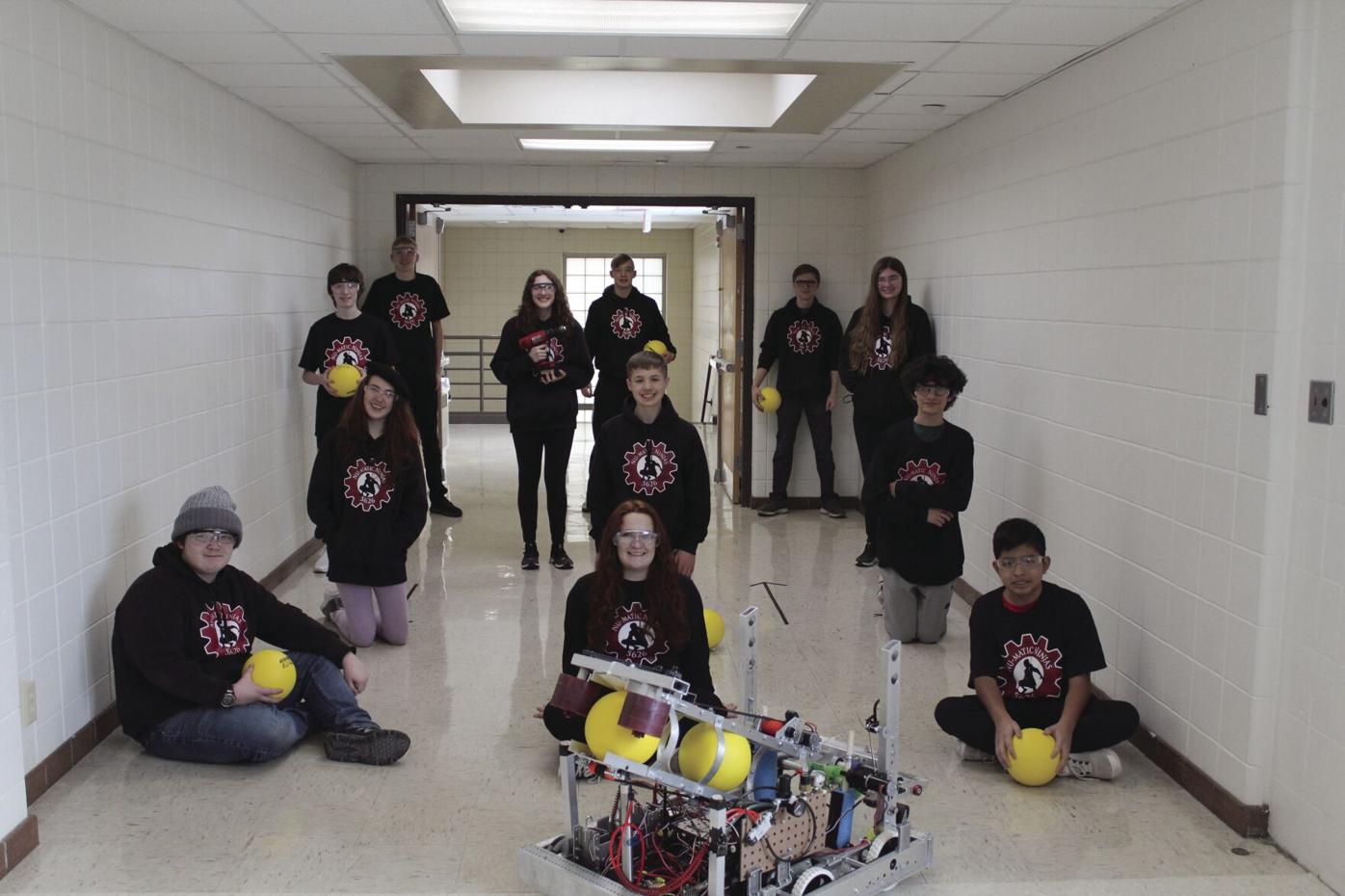 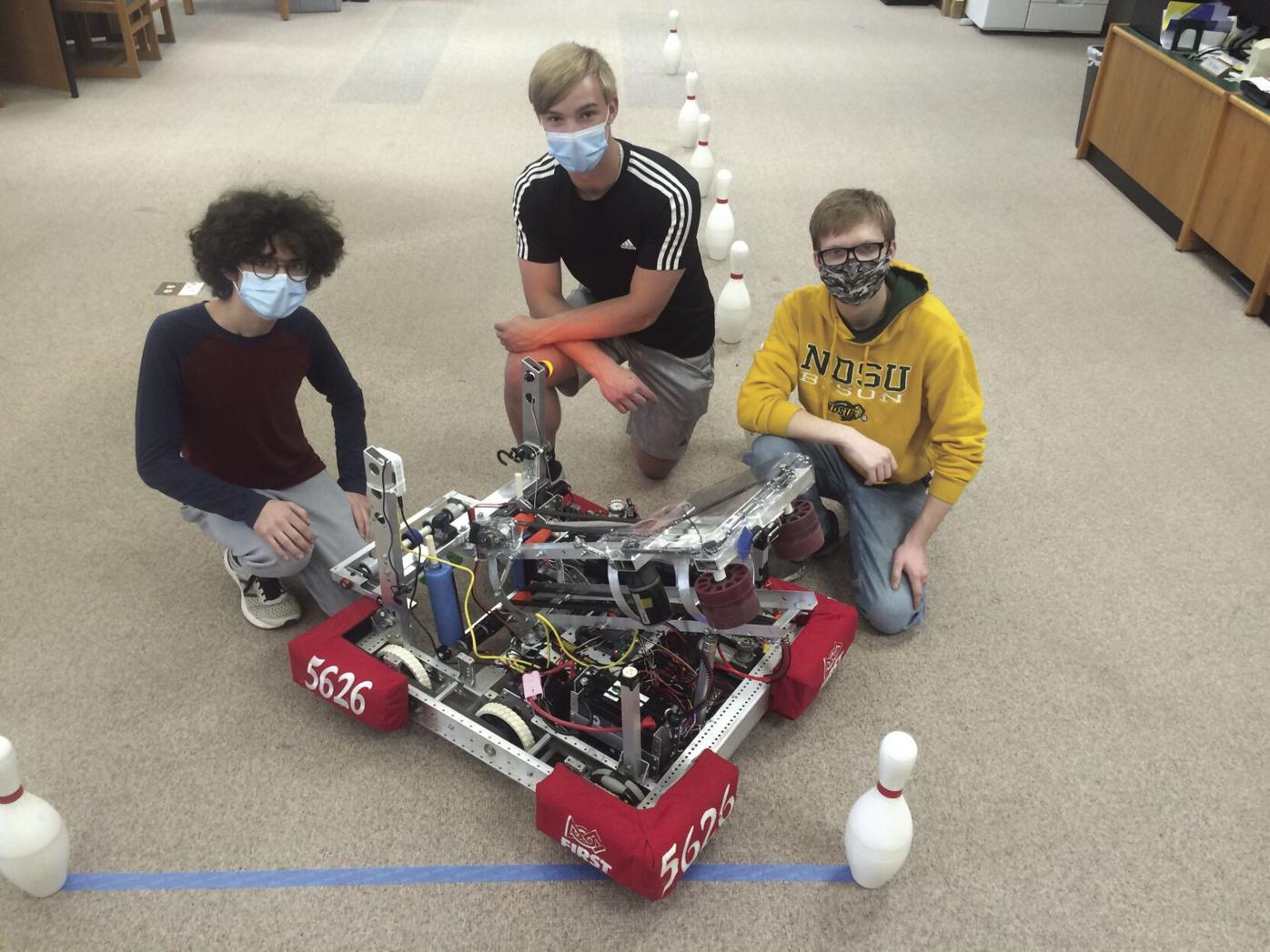 The seniors all earned scholarships at four-year universities and will be majoring in some form of engineering, including Cole Becker, Trystan Duck, and Jonah Coffel. (Photo submitted by Lynn Panning)

The seniors all earned scholarships at four-year universities and will be majoring in some form of engineering, including Cole Becker, Trystan Duck, and Jonah Coffel. (Photo submitted by Lynn Panning)

While it’s been a strange year, robotics has been quietly happening the background for many of the schools in Carver County, not the least of which is Central’s Nu-matic Ninjas. So far, the team of students has been working hard to compete and it shows. With their game and skill challenges being accepted at the state level, the students are now preparing to submit more videos for the challenges while making improvements on their previous submissions.

Normally, FIRST Robotics has a large competition wherein students gather and compete directly while also collaborating with other teams. Unfortunately, with how many teams exist and how large they are, there was no way normal competitions could happen, so FIRST came up with a solution: remote competition.

“We couldn’t predict what would happen this year,” said Lynn Panning, coach for the robotics team. “It’s so awesome that they’ve gone to state this year.”

There were three types of challenges to participate this year: game, skill, and innovation. Teams chose which to participate in and how many. Each category was judged separately, making it more fair if teams couldn’t do all three challenges. For the Ninjas, they chose the first two.

For their game, “Oceanic Plunge”, the Ninjas created a scenario wherein the robot is trying to power an underwater base. To do so, it must charge batteries and place them into the filtering unit. The robot can also remove the filter rings to replace them with fresh ones. In the final 30 seconds, the robot would then work with all others on the field to restart the system, having to climb to do so.

“It was kind of like some of the games we’ve played before,” said Jonah Coffel, senior. “We also had to come with technology that would be used in the ocean.”

As for the skills, that was more simple. FIRST gave criteria for testing the robot in various ways, both autonomously and manually. Students would then submit videos by the deadline of the robot doing whichever challenges they chose and would be graded on the performance.

The big benefit of this year was using the same robot as last year, meaning there wasn’t much for coding and building to do aside from a few tweaks to meet the challenges. And while they didn’t have to build a new robot, the students did get the chance to do a few new things. For one, to make Oceanic Plunge more real, they animated in CAD, a 3D animation program.

The season did have some unique problems though. The hybrid schedule threw an immediate wrench in things with only part of the team being on campus any given day. Because of this, the first half of the season was partially done through Zoom.

“Sometimes it’s hard to get ideas across on the internet,” said Holly Feist, freshman.

For students new to the team, while an odd introduction, they agree that it was still a good year.

“I joined because it seemed really cool and fun to do,” said Trey Gratz, freshman.

“I’m planning to join the build team next year since we didn’t have much to do this time,” said Nathan Panning, freshman.

For other students, it was a bittersweet year. The seniors, having been a part of the Ninjas since before coming to high school for many of them, it was still a good year, all things considered.

“Nothing really changed much, but it did get easier over time,” said Coffel. “I’ll come back and visit next year.”

With state competitions coming, the Ninjas still have some work to do. They’ll be doing some fine tuning for the time being, as well as trying out new skills challenges, including one that has the robots “travel” on a map of Minnesota and collecting balls to throw. And now that they’re able to meet in person everyday, things are more collaborative than before.

If you’d like the chance to look at what the team has been up to, visit https://numaticninjas.wixsite.com/centralrobotics5626 to learn about the team. They also have a Twitter, Facebook, and YouTube showing off all their accomplishments over the last few years as well as their videos from this year.