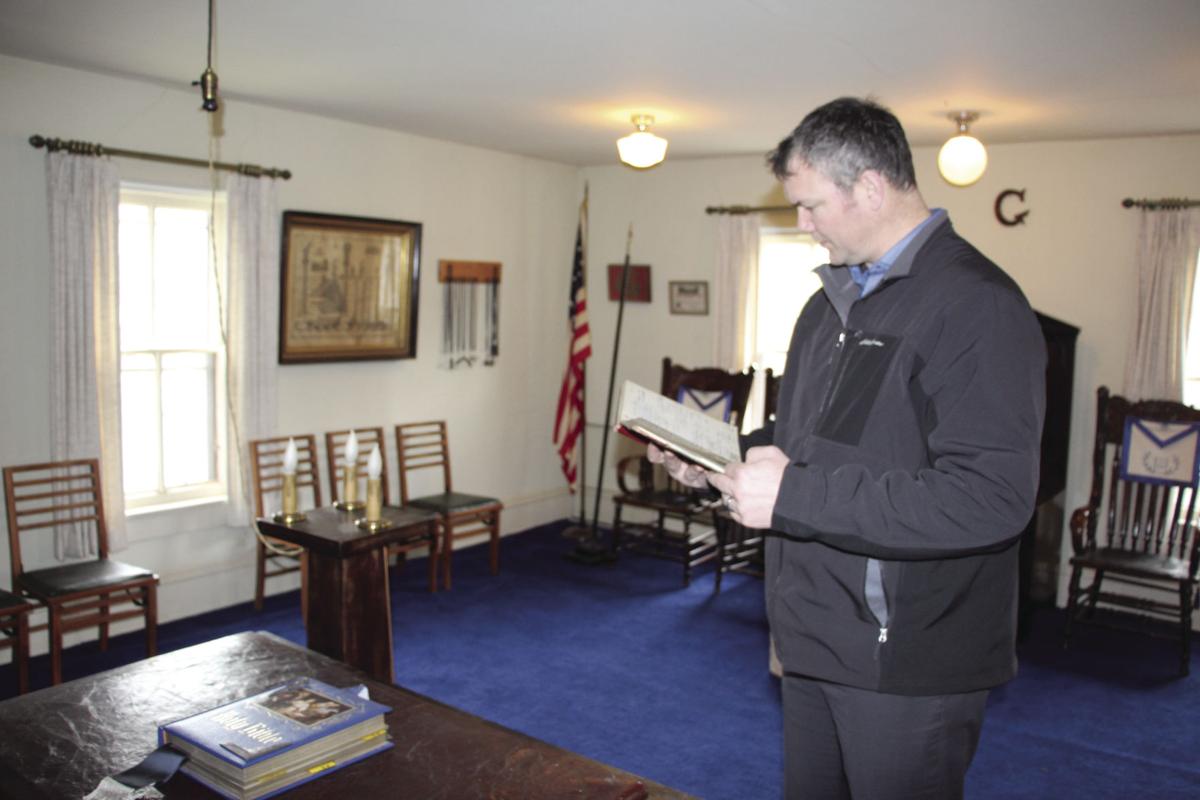 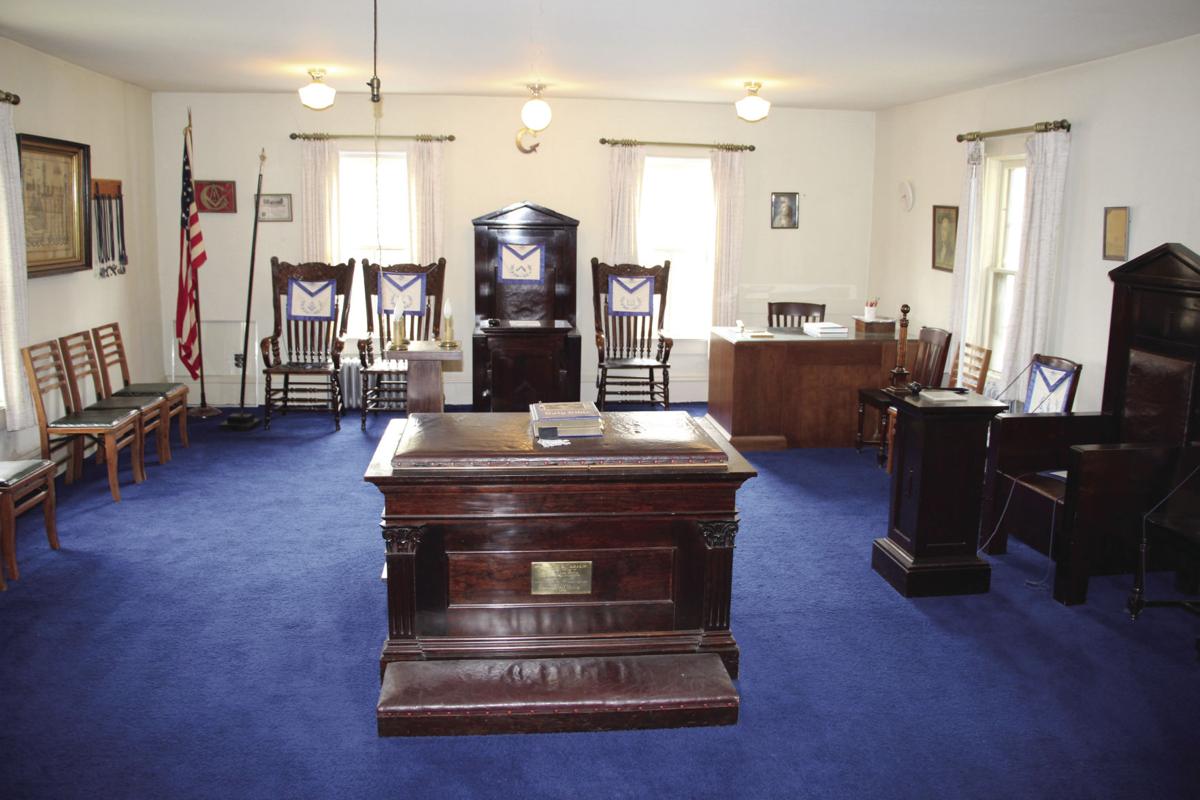 The meeting room in the upstairs of the Waconia Masonic Lodge looks like something out of Colonial New England. (Al Lohman/The Patriot) 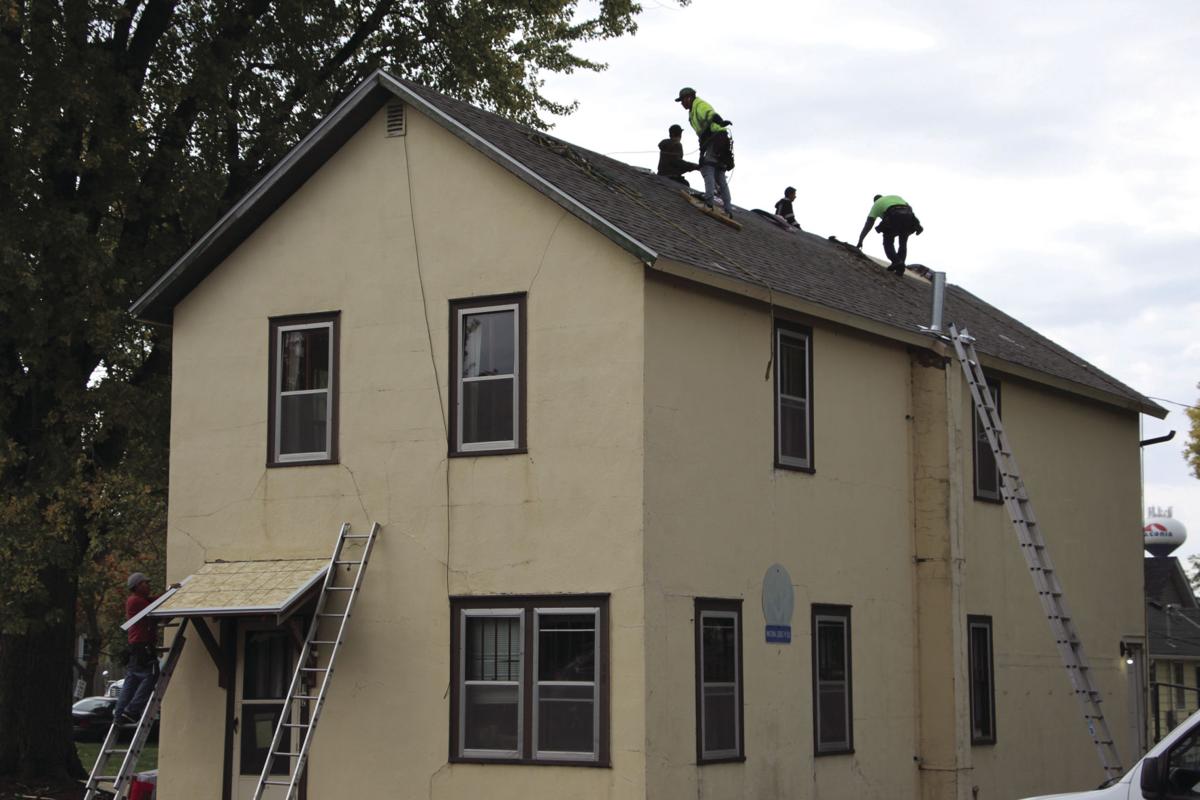 Roof work is being done on the old George Zahler residence on Elm Street, home to the local Masons. (Al Lohman/The Patriot)

The meeting room in the upstairs of the Waconia Masonic Lodge looks like something out of Colonial New England. (Al Lohman/The Patriot)

Roof work is being done on the old George Zahler residence on Elm Street, home to the local Masons. (Al Lohman/The Patriot)

The George Zahler residence at 136 South Elm Street, home of Waconia Masonic Lodge #326, recently got a new roof, and some other upkeep could be on the way, according to lodge master Karl Bitschenauer.

The Waconia fraternal organization was first chartered in 1926, however, references to Freemasonry date all the way back to 1390.

Zahler was one of the local founding fathers, according to the history book Waconia: Paradise of the Northwest, Vol. II. Lodge 326 met at his residence twice a month for years and Zahler willed the property to the organization with the stipulation that his wife could reside on the first level for the remainder of her life.

While there has been some talk in recent years about raising the building for a municipal parking lot, it remains home to the Masons and the recent improvements were much needed, Bitschenauer said.

The upstairs meeting place looks like something out of Colonial New England and a large portrait of President George Washington assumes one end of the room. The Masons are also steeped in symbolism and depictions of many of those symbols take up other sections of meeting room walls.

While there is some mystique to the Masons, fostered largely by books and movies like Da Vinci Code, it’s not a cult or subversive group, Bitschenauer explains.

The United States Masons (also known as Freemasons) originated in England and became a popular association for leading colonials. The first American lodge was founded in Boston in 1733. Masonic brothers pledged to support one another and provide sanctuary if needed, especially during the American Revolution. So, while it is not a secret organization, the order has maintained the signs, sacred words, and passwords of the Ancient and Accepted Scottish and York Rite, employed as a means of recognition by a large number of Freemasons now scattered throughout the world.

More than a dozen American presidents were Masons, along with many other leaders across the nation, Bitschnauer points out. In Minnesota, some of the them are James J. Hill, Hubert Humphrey and the Mayo brothers.

The mission of the Freemasons of Minnesota is to engage and inspire good men, Bitschenauer explains. Masonry is the world’s first and largest fraternity, based on the belief that each man can make a difference in the world. The basic purpose is to make “better men out of good men,” to enhance and strengthen the character of the individual by providing opportunities for fellowship, charity, and education. There’s also a counterpart for women called the Order of the Eastern Star.

In the Middle Ages, the term “freemason” was awarded to highly skilled stonemasons who were hired to build castles and cathedrals in England and Scotland. Because of the inherent danger of their work, stonemasons formed local organizations, called lodges, to take care of sick and injured members as well as the widows and orphans of those who were killed on the job. Eventually, men who were not skilled stonemasons wanted to join the group for the many advantages it offered. These men were known as “accepted masons.” This is how the group began to shift from a craft guild to a fraternity.

Its history, tradition and principles attracted Bitschenauer to the organization, he said, and during his travels he frequently visits other lodges.

The symbols, he notes, are rooted in architecture and masonry and are used as tools to teach symbolic lessons. For example, the square “teaches us to square our actions with all mankind.” The square also represents fairness, balance, stability, giving a foundation for building upon.

The compass (to draw circles), represents the realm of the spiritual eternity. It is symbolic of defining principles but also of infinite boundaries. Freemasonry is open to men of any faith, but a requirement is that all believe there is one God or Supreme Being.

The symbol is often seen with the letter “G” in the middle, which stands for “geometry,” a powerful science that helps unravel the mysteries and wonders of nature.

Meanwhile, one of its credos, care of widows and orphans, has broadened to include other philanthropic work, Bitschenauer explains.

Among local work, the Waconia Masons are partners with the Knights of Columbus and the Waconia Lions in their annual holiday collection of items that are sent to stationed military personnel. The organization also presents two scholarships to graduating seniors each year.

On a broader level, since its inception in 2006, Minnesota Masonic Charities has grown to become one of the most influential nonprofit grant makers in the state, providing important services and significant contributions in the areas of education, cancer research, eldercare, children’s health, community outreach and the preservation of Masonic history. It also is the parent organization of Minnesota Masonry, and supports local lodges by matching funds they raise for eligible community projects and programs, according to Kelly O’Rourke Johns, director of marketing and communications.

Membership today in the Waconia Masonic Lodge stands at around 30. The Norwood Young America chapter merged with the Waconia lodge in 1984.

While membership is steady now, Bitschenauer says, one of the challenges, like many other community organizations, is attracting new members in the face of busy schedules and competing interests. That challenge is complicated because one rite of order among the Masons, he explains, is that it can’t recruit or impose its beliefs on others.

The answer then is in another symbol that has been on a sign outside the Masonic Lodge during the recent Waconia Chamber of Commerce Scarecrow Contest: 2B1SK1. In other words: To be one is to know one.

If you want to get to know a Mason or learn more about the Waconia Masonic Lodge, contact lodge master Karl Bitschenauer at 952-300-7066.