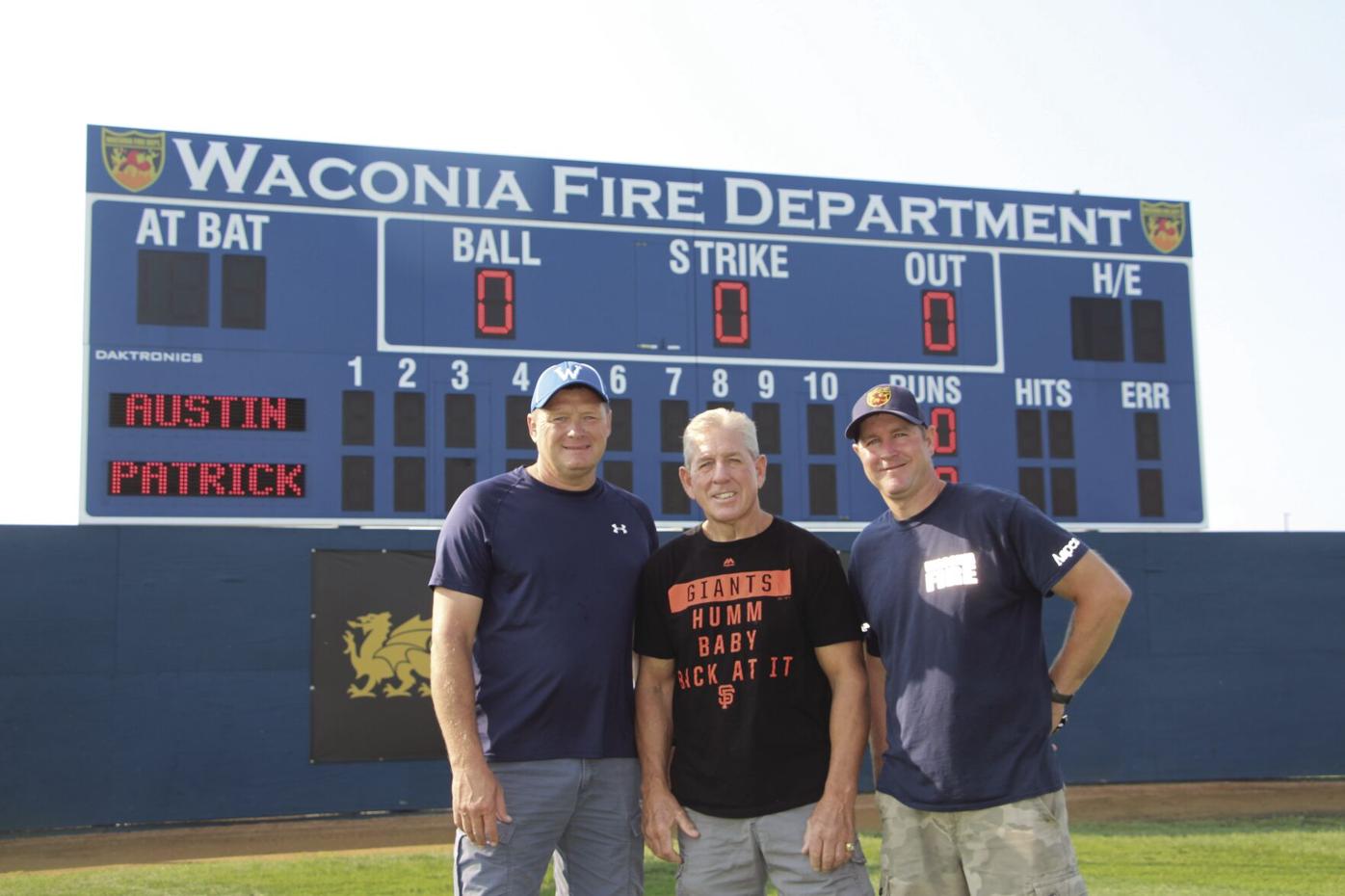 Doug Rolf, Brad Gulden and Drew Gulden in centerfield with the Waconia Fire Department scoreboard as the backdrop before a state tournament game last Saturday. The Guldens will take the mound this Sunday to throw out the ceremonial first pitch. (Al Lohman/The Patriot) 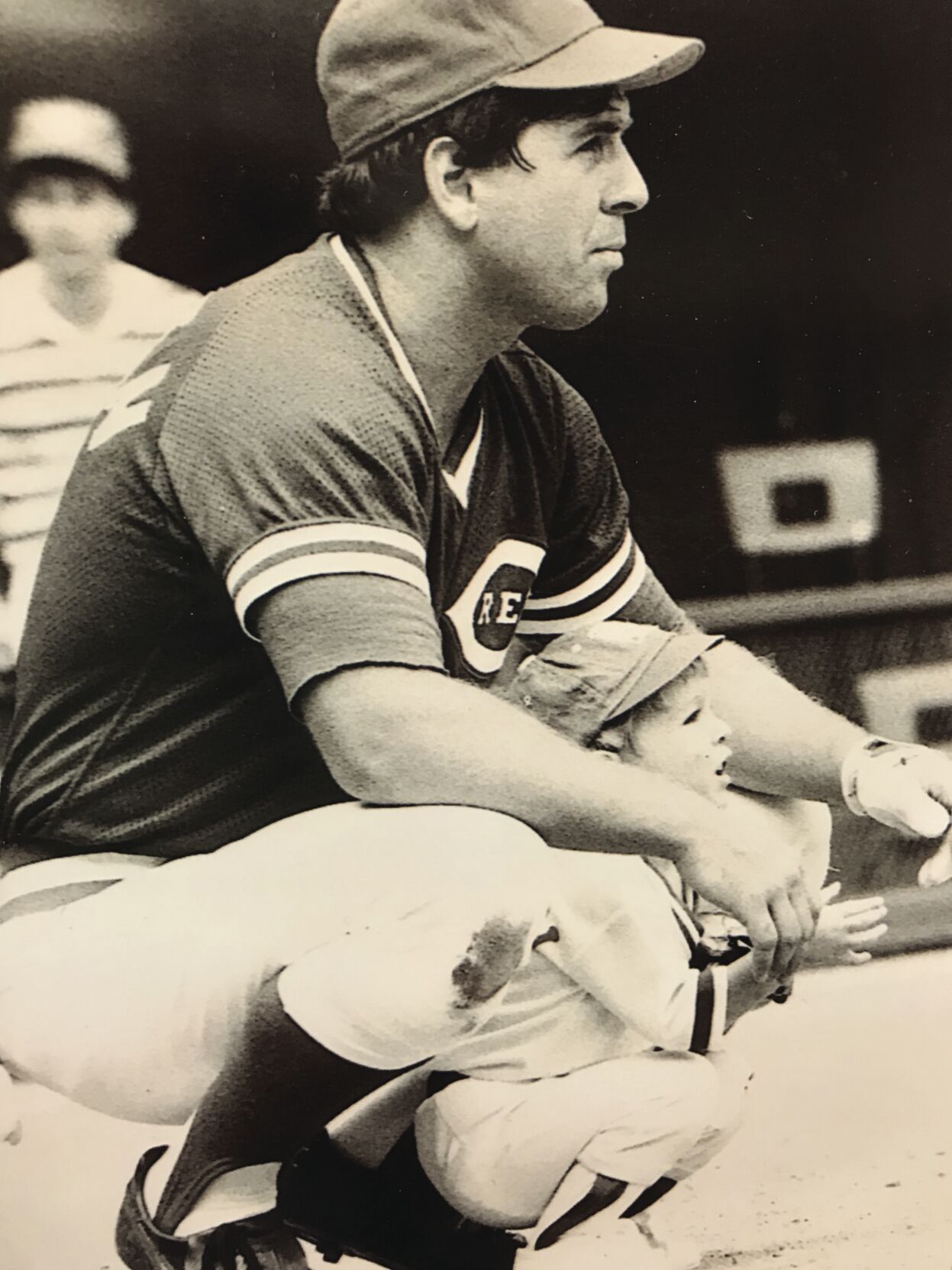 Father and son Brad Gulden and Drew Gulden behind the plate years ago before a major league game. (Submitted photo)

Doug Rolf, Brad Gulden and Drew Gulden in centerfield with the Waconia Fire Department scoreboard as the backdrop before a state tournament game last Saturday. The Guldens will take the mound this Sunday to throw out the ceremonial first pitch. (Al Lohman/The Patriot)

Father and son Brad Gulden and Drew Gulden behind the plate years ago before a major league game. (Submitted photo)

Brad and Drew Gulden were catchers when they played baseball. Brad at the professional level and Drew with the town ball Hamburg Hawks. But this Sunday they will be taking the mound in Waconia as the Minnesota State Amateur Baseball Tournament reaches championship weekend.

Brad and Drew Gulden also are firefighters. Brad a retired captain and Drew still active as a captain with the Waconia Fire Department. This Sunday, Sept. 5, they will be throwing out the ceremonial first pitch at the noon game in recognition of hometown heroes and the contributions of the Waconia Fire Relief Association to local baseball.

The firefighter association also has been a big contributor to Lions Field, responsible for the dugouts there, the scoreboard in center field, and other donations. The grandstand and other improvements like the scoreboard led to Waconia hosting the state amateur tournament for the first time this year.

Both Rolf and Chris Ohm, Waconia Baseball Association president, call the ceremonial first pitch an opportunity to salute firefighters and recognize the longstanding partnership between their respective associations. And the Guldens say they are honored at the opportunity and the chance to take the field again.

Brad Gulden notes that he actually was a pitcher during high school. An accomplished one at that earning conference and all-state honors. But he made his baseball career as a catcher, playing with a few major league teams from 1978 to 1986 and capturing two World Series rings with the New York Yankees.

Son Drew also was an accomplished catcher, playing in high school, college and 15 years with the Hamburg town team. He also earned a state amateur championship with the Plato team in 2007 as a draftee for the tournament.

The elder Gulden said he become interested in an emergency responder role while still playing with the Yankees. Unbeknownst to the team, he visited Station 54 in the Bronx, rode at night with the EMT staff and got the necessary training to become a firefighter. After leaving baseball, he returned to the area and served on both the Carver and Waconia fire departments until retirement.

“I always learned something from Brad and he had a very positive attitude,” Rolf said.

Son Drew not only attended his dad’s games, he also joined him at the fire station along with other firefighters’ kids and eventually joined the force where he has served for 14 years.

Now father and son will take the field together again Sunday to throw out the first pitch.