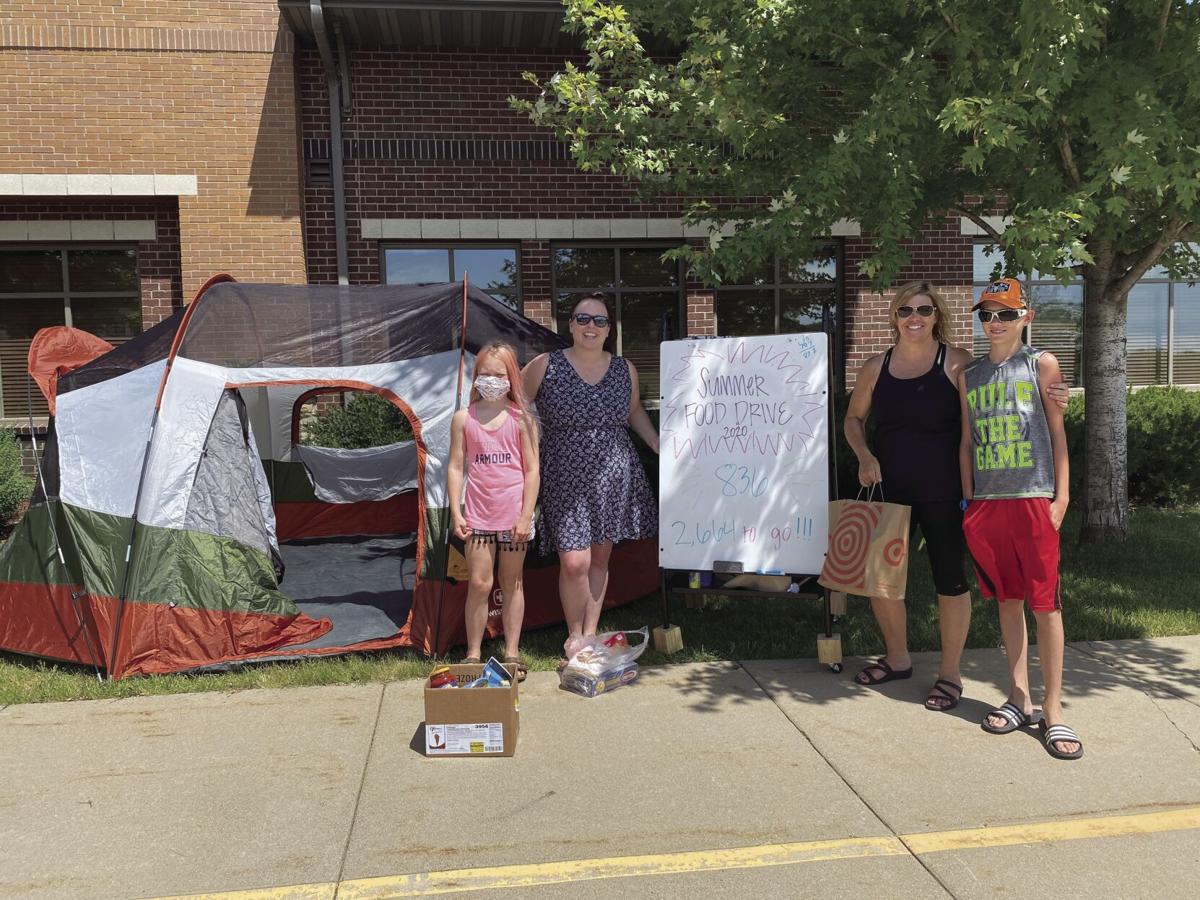 Erin Slavik(left of sign) and Alyssa Jeurissen (right of sign) standing with students who donated to the food drive. 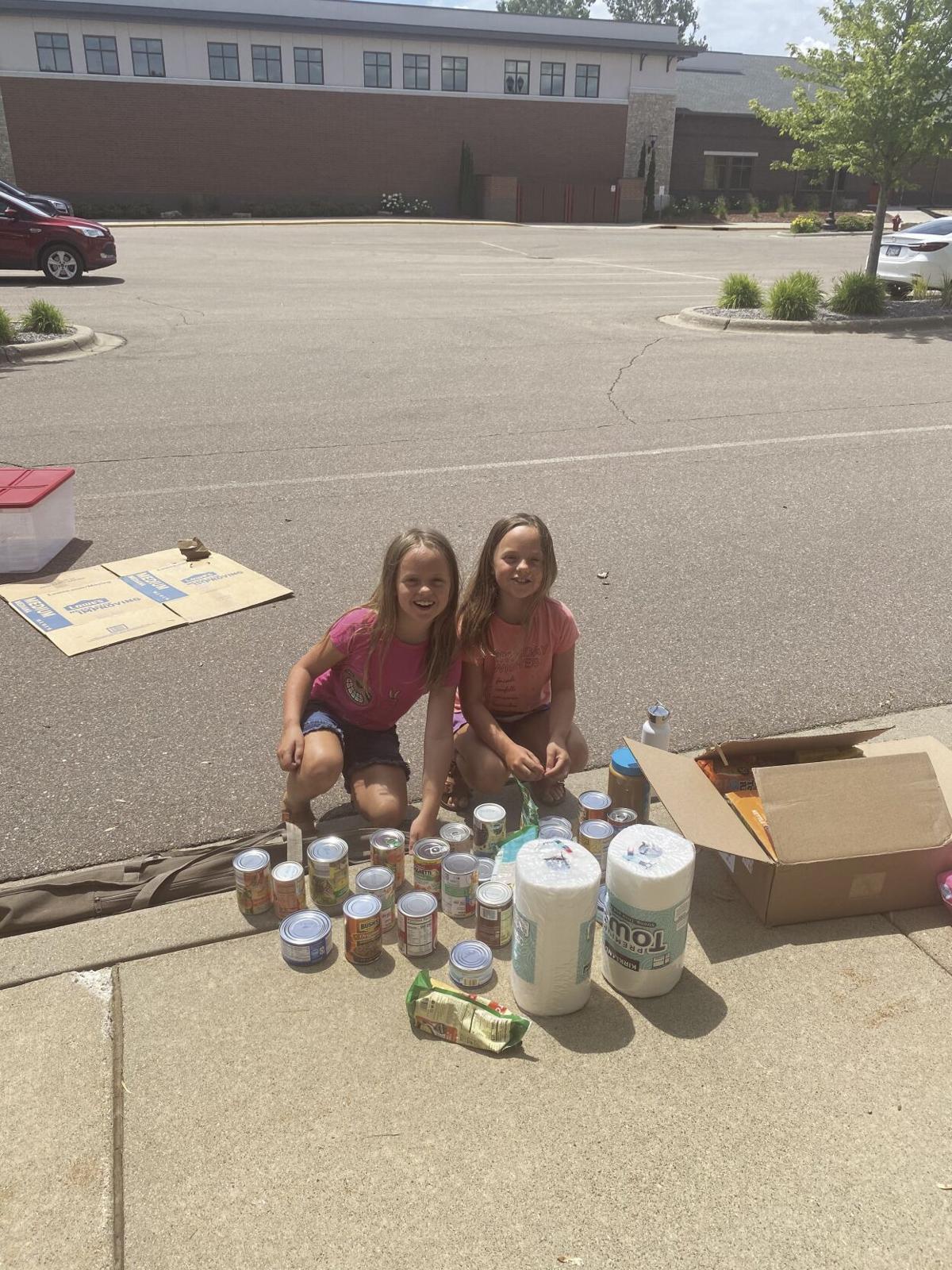 Two students who brought several food items and necessities for the food drive at Cologne Academy. (Submitted by Alyssa Jeurissen)

Erin Slavik(left of sign) and Alyssa Jeurissen (right of sign) standing with students who donated to the food drive.

Two students who brought several food items and necessities for the food drive at Cologne Academy. (Submitted by Alyssa Jeurissen)

Even though many people are returning to work, many families are still in need of help throughout Carver County. In an effort to help out those families, two teachers from Cologne Academy got to work organizing a food drive. The plan: Camp out at the school until they reached their goal of 3500 items. The result: They didn’t need to spend a single night, because within 12 hours, they had over 4700 items and counting.

“Our school really wanted us to do student connections throughout the summer, and we were coming up with ideas,” said Erin Slavik, one of the teachers. “I was driving one day to swimming, and they were saying on the radio that Minneapolis is dying for food, and I wanted to do something like that.”

Slavik then called the Norwood Young America Foodshelf and heard that Chaska is having some struggles with the increase in homeless populations being served, with some coming from the Cities or many new people needing help. With this in mind, Slavik contacted Alyssa Jeurissen, another teacher at Cologne Academy and the organizer for the Fall Food Drive.

The idea was pretty simple: the two would set a goal and plan to camp out at the school until that goal was reached. Slavik shot high, with the hopeful goal of 5000 items being delivered. Jeurissen, from experience, pointed out that the typical item count is just around 1000. To meet in the middle, the goal was placed at 3500.

With an idea agreed upon, the two got to work contacting families and friends about the food drive. The hope was to spread the word as far and as quickly as possible in order to reach their goal. Meanwhile, they prepped for their camping trip at Cologne Academy with a tent, cots, a small grill, and plenty of water to beat the summer heat.

At 10am on July 6, the plan was put into motion and the food drive began. Each package of food counted as one item with each dollar counting as two. By noon, over 800 items had been raised. Throughout the afternoon, more and more items kept streaming in, with families and students returning (sometimes more than once) to donate more. By the time dusk rolled around, the two teachers were sitting on 3300 items.

“A lot of families in the neighborhood behind us biked up or brought a wagon,” said Jeurissen. “A couple kids went around their neighborhood on their bikes asking for donations and they brought us their wagon once they were done.”

Those quickly turned into more than 4000 after a few large donations before 9pm. At 9:02pm, the official count was over 4200 items. While they were officially out of camping for the night, that didn’t mean that they didn’t come back the next day for those who were hoping to see them camp out. After Tuesday, July 7, they had 4771 items in total to donate to the Norwood Food Shelf and Chaska’s Bountiful Basket.

“It amazes me how much the community came together,” said Slavik. “It was mostly our Cologne Academy families, but also people from just around the county.”

The donations were a variety of items, from ramen noodles and individually packaged items (which are great for homeless patrons) as well as things like baby wipes, diapers, and hygiene products.

“We are so completely blown away by the compassion and generosity we saw from our CA community,” said Jeurissen. “It was so nice to see our students throughout the day.”

The food was split about 75 percent going to Chaska, with the rest going to Norwood, roughly 1200 items with a fair chunk of the items being cash to buy food and supplies.

The plan for now is to run the fall food drives as normal, without camping out. However, next year, Jeurissen and Slavik are thinking about making it a race to the goal. Whoever gets there first doesn’t have to camp out at the school. With that being next year, though, the two are still working out how exactly that will happen.

Until then, though, both expressed that they were so thankful for the community’s efforts with this food drive. For those who weren’t able to donate during this one, the next Cologne Academy food drive is this fall, and is planned to take place with Stuff a Truck as per usual. If you’re looking to keep helping those in need, remember that food shelves are always looking for donations, whether monetary or food or supplies.