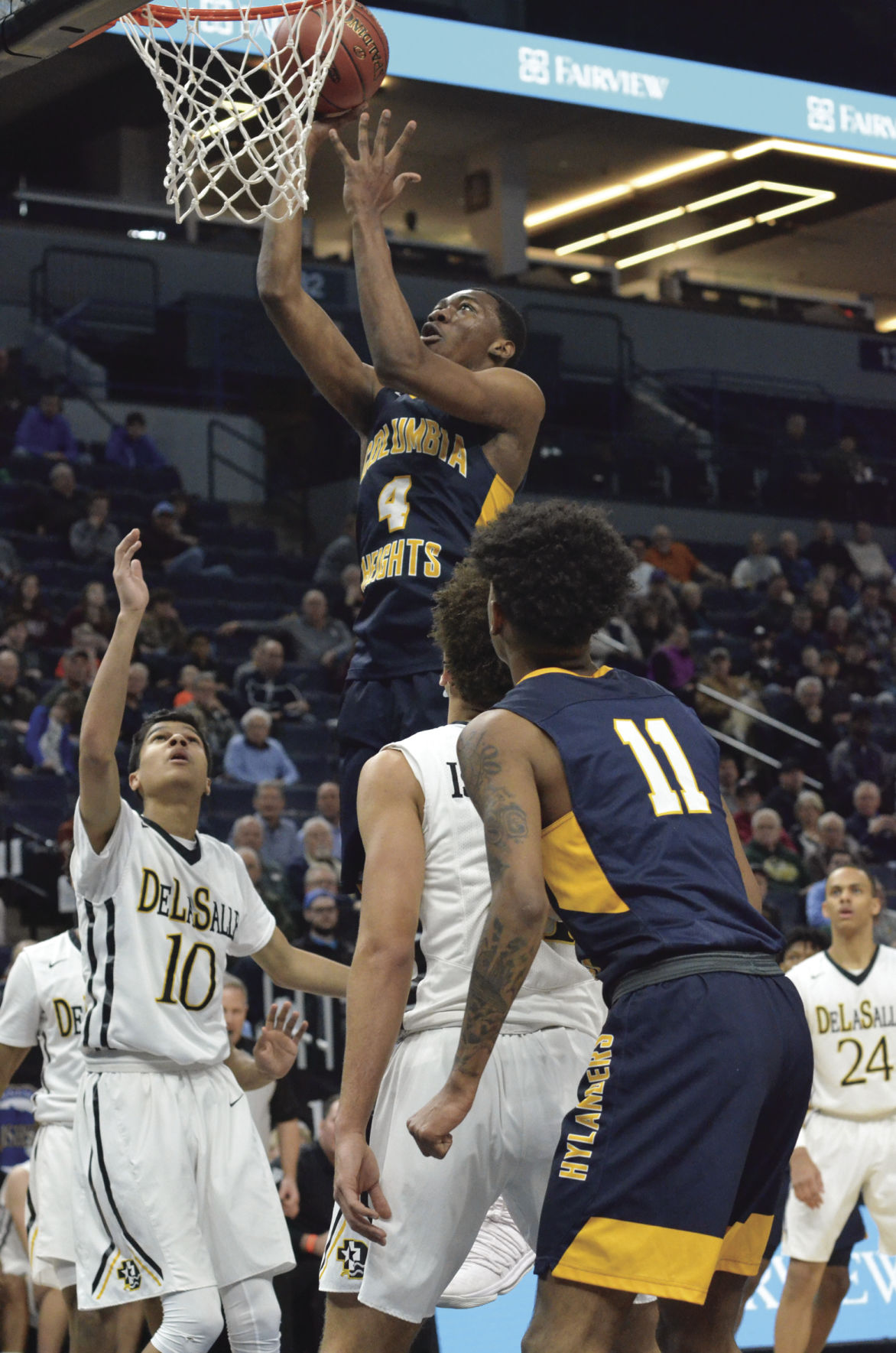 Columbia Heights’ Wendell Matthews goes up for a basket against DeLaSalle in the 2018 state boys basketball tournament. The Hylanders ousted the six-time defending state champions in that game. 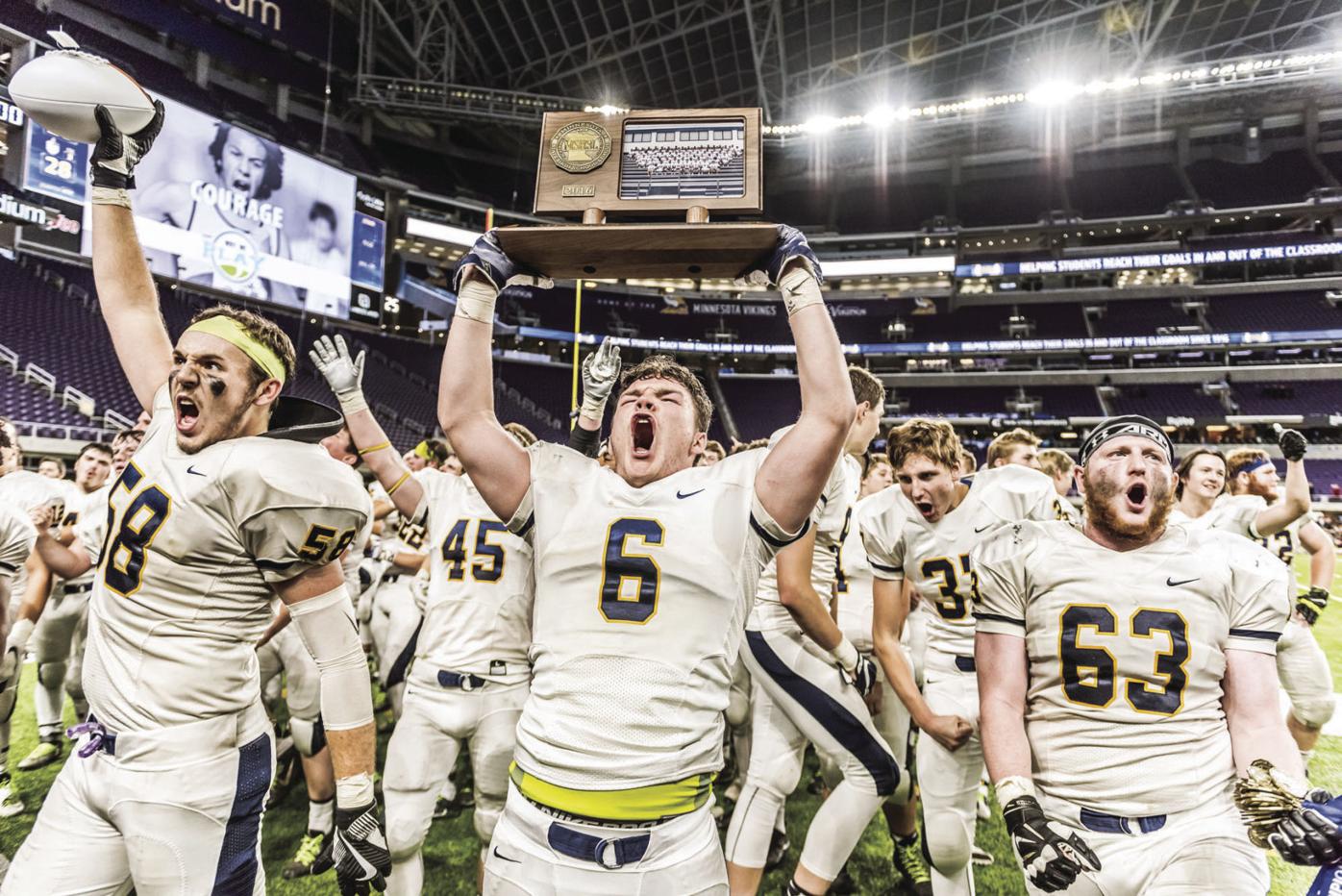 Totino-Grace football players celebrate their win over Eden Prairie in the Class 6A Prep Bowl in 2016.

Columbia Heights’ Wendell Matthews goes up for a basket against DeLaSalle in the 2018 state boys basketball tournament. The Hylanders ousted the six-time defending state champions in that game.

Totino-Grace football players celebrate their win over Eden Prairie in the Class 6A Prep Bowl in 2016.

This week marks the final edition of the Sun Focus as coverage of Fridley and Columbia Heights moves to ABC Newspapers, part of the same company as Sun Newspapers.

The Sun Focus covered local sports since its beginnings in the early 1980s. During those nearly four decades of high school sports coverage, readers have recalled many great moments. Here’s a look at a few of the highlights.

Totino-Grace racked up 10 state football titles with most of them coming in smaller classes during the 2000s before moving into the big school class in the early 2010s. The Eagles then dethroned Eden Prairie in 2015 and a year later, won a Class 6A title in 2016.

Centennial has been out of the Sun Focus coverage for some time, but it’s worth recapping the dominant 2003-2004 Cougars team that rolled to state, which the Sun Focus covered. The Cougars went 30-1 that season. It’s still known as one of the best boys hockey teams in state history.

While Totino-Grace won Class A state hockey in 2002, but the 2005 Eagles team make a big mark too in its epic runner-up finish against Warroad. The squads battled to a 4-3 final in double overtime.

Columbia Heights made waves on the state boys basketball scene during the past decade. The Hylanders ended an 81-year state tournament drought in 2011 and reached the championship game led by star player Zach Lofton. In 2018, the Hylanders reached their third state tournament in eight years and took down six-time defending champion DeLaSalle in the semifinals but lost in the championship to Delano.

Few players had an answer when Fridley’s Suzanne Gilreath shot from beyond the three-point line. The one-time Tigers girls basketball star set the state career mark in 2016 for three-pointers made with 294.

Kauls of the Mustangs

Zig Kauls led the Mounds View boys basketball program for 45 years until his retirement in 2103. The Sun Focus captured quite a bit of the longtime coach’s success with the Mustangs, including 2005 when star senior Travis Busch won Mr. Basketball.

Fridley won its lone state football title in 1990 but the program saw a resurgence in the 2010s with three-straight state tournament appearances.

Mounds View baseball won back-to-back state titles in 2013 and 2014, a feat hardly accomplished. Just ask Stillwater, which entered a favorite this spring to repeat and couldn’t do it.

There’s truly too many great sports memories to recap in column, so it’s worth having some honorable mentions. Mounds View boys tennis had many dominant teams while Fridley and Columbia Heights rose from obscurity to state tournaments in the past few years. Totino-Grace won numerous boys and girls state soccer titles.