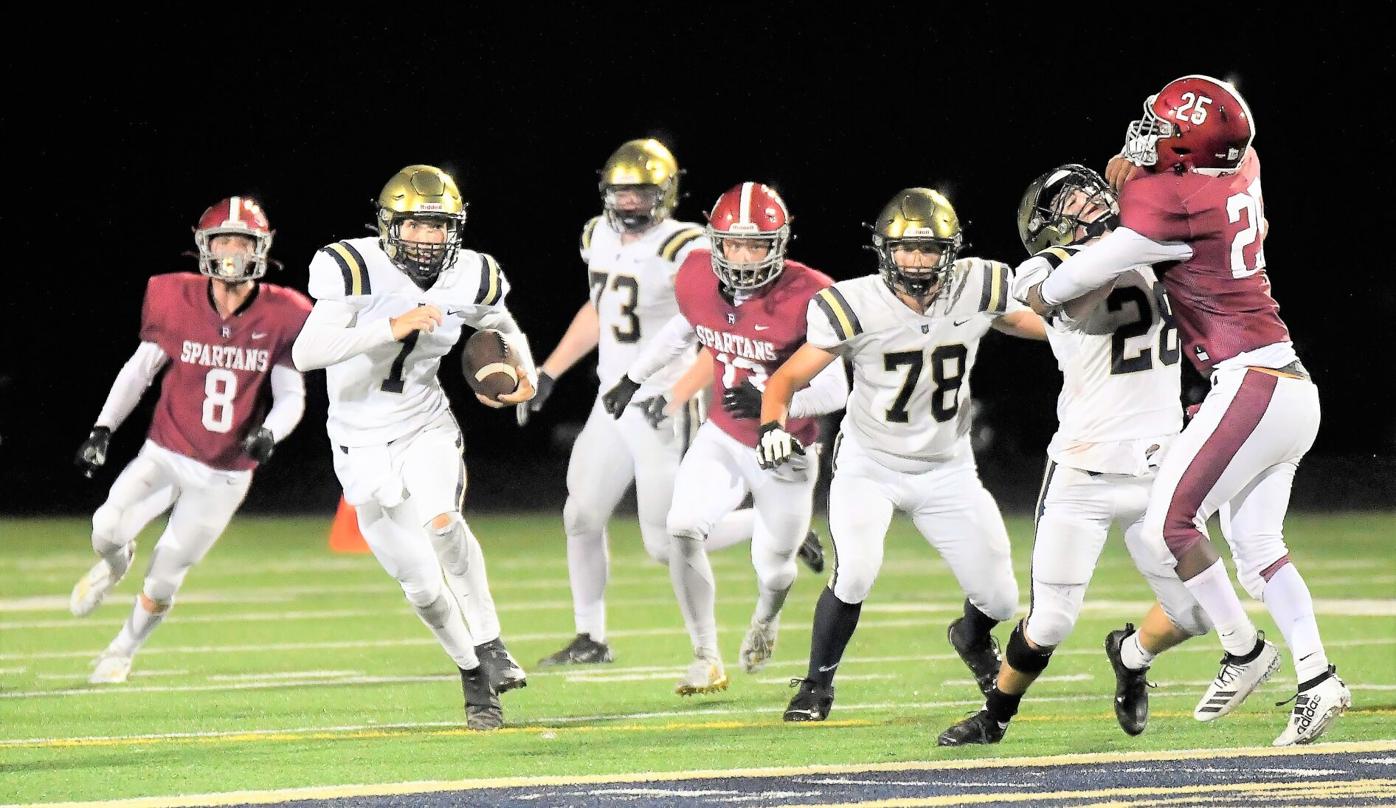 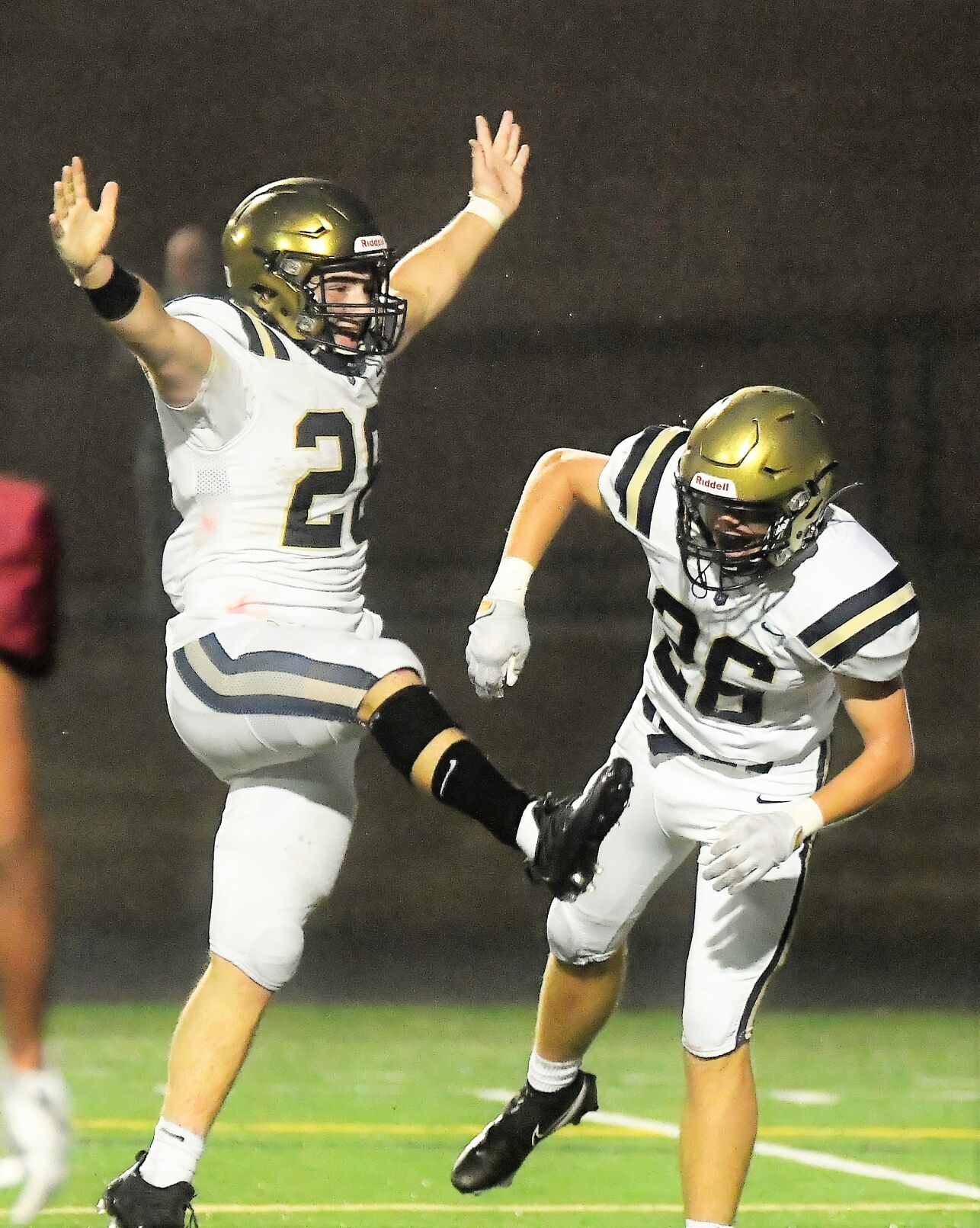 Jake Meissner of the Providence Academy Lions celebrates the first touchdown of the season with teammate Ty Lovcik (26).

In the second quarter of the season opener, trailing Richfield 8-0, the Providence Academy football team needed a big play.

Senior halfback Jake Meissner dropped back to receive a Richfield punt and took it 62 yards to the house. The extra point kick was made by Ryan Hutt, so the Lions went to the locker room down 8-7 at halftime.

The second half belonged to the Lions, as they outscored Richfield 21-0 for a 28-8 victory.

“It felt like we needed to make a play when we were down 8-0, and I had the opportunity to step up,” Meissner said after the game, as Providence fans surrounded their heroes for what the school calls “the fifth quarter.”

After Meissner scored that touchdown, Providence Academy owned the night. “We got the nerves out,” Meissner said. “None of the yards I gained would have come without a great performance from our offensive line.”

Senior captain Mark McCarthy played every down of the first three quarters in the Lions’ offensive and defensive lines.

“We started out slowly tonight, but in the second half we had more energy and our offense and defense were clicking,” McCarthy said. “It all started with Jake’s punt return.”

“Jake stepped up when we needed it,” junior offensive lineman James Wicht said. “In the second half, we kept pounding away.”

The senior running backs, Meissner and Kaden Lacomb took turns running the ball, but it was senior quarterback Jack Reller, who put the Lions ahead to stay with a 9-yard sweep to the end zone in the third quarter. Meissner’s run for a two-point conversion gave the Lions a 15-8 lead. Lacomb added a 2-yard touchdown run in the third quarter and Hutt kicked the extra point to make the score 22-8. In the fourth quarter, Meissner ran 6 yards for his second touchdown for the final margin.

“Jake Meissner has a motor that doesn’t stop,” Lions head coach Colin Rooney said. “He does things that you can’t draw up on a board.”

While Meissner dominated the game, also playing on defense at times, the victory was still a team effort.

“Jack Reller made his first start at quarterback and did a good job,” Rooney said. “He was a receiver last season. Everyone we play this year is going to be conscious of Meissner and try to contain him. We have other weapons.”

The only touchdown the Lions allowed came on a pass over the top in the first quarter. Richfield quarterback Mitchell January found A.J. Shelley behind the defense for a 62-yard touchdown.

“Our defense played great after that play,” Rooney said.

Looking to a 7 p.m. Sept. 9 game against Spectrum in Elk River, Rooney said, “The first game of the season, I knew there would be some drops and some penalties. When we play Spectrum, they will be running a wing-T, which is a run-heavy offense.”

The prospect of being 2-0 after the first two weeks of the season appeals to Rooney, since the Lions had a 1-5 overall mark last season.

The Lion players are confident they can do the job.

“We just have to have good practices and keep our momentum,” McCarthy said.