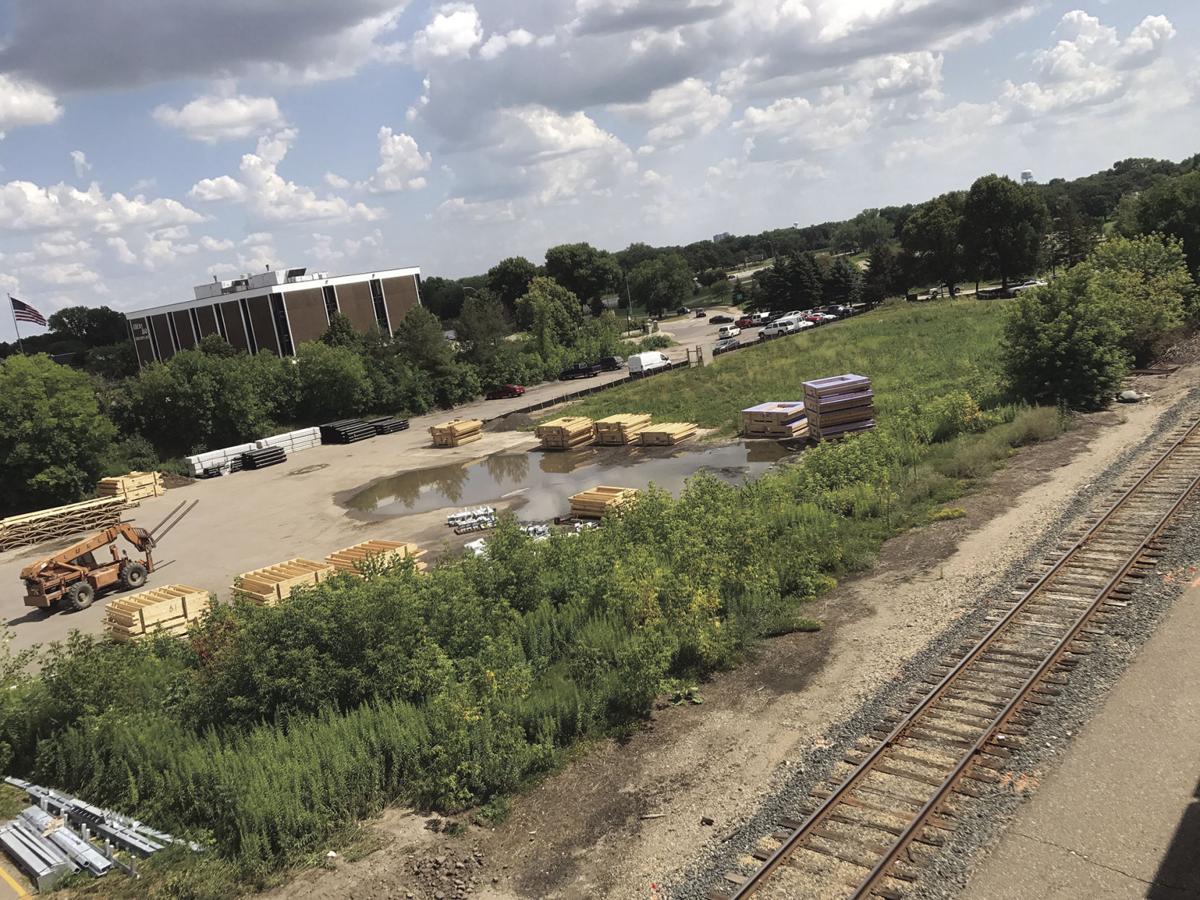 The former public works site at 5146 Eden Ave. will become home to an apartment building and a civic facility housing a new arts center and active adult center, according to plans being formulated by the city of Edina and a developer. Currently, the site is being used as a staging area for a senior living apartment complex under construction next door. (Sun Current staff photo by Andrew Wig)

Plans for 5146 Eden Ave. now show an apartment complex situated on the south side of the parcel instead of the north side. A civic facility will be built on the north end of the space if the current vision becomes reality. (Illustration courtesy city of Edina)

Edina’s plans for its former public works site continue to are being re-worked as the city evaluates designs for the site and a potential land sale.

After receiving a purchase offer of about $3 million for 1.5 acres of the 3.3-acre site at 5146 Eden Ave., the Edina Housing and Redevelopment Authority on July 26 directed city staff members to seek an appraisal for the land. Mayor Jim Hovland advocated for the measure after comparing the offer from Frauenshuh Commercial Real Estate to the sale price of the former Edina School District bus garage, which neighbors the former public works site.

The former bus garage land sold for $65 per square foot, Hovland noted. If the former public works site was sold at the same rate, the 1.5 acres sought by Frauenshuh should be worth about $4.2 million, about $1.2 million more than the purchase offer, according to Hovland’s math.

“We’ve got an obligation to the residents of our town to maximize the value of the property that we would contemplate selling,” he said.

While Frauenshuh seeks to build 143 apartment units, the city is planning a new art center and adult activity center for the parcel’s remaining 1.8 acres. Now planned for the north side of the parcel, according to revised plans, the five-story facility would encompass about 45,000 gross square feet – 16,000 for art center space, 13,000 for an active adult center that would replace the current Edina Senior Center, and about 5,000 for a cafe, restaurant or culinary arts space, according to Parks and Recreation Director Ann Kattreh.

Including a public plaza and two levels of parking under the new civic building, construction of the public facilities is estimated to cost $37.8 million, Kattreh said.

A question of scale

Eliminated from the plans based on the city council’s direction, Kattreh said, was a multi-use performing arts space. But HRA Members Bob Stewart and Kevin Staunton continued to advocate for such a feature. Stewart specified that he hoped for something more than an arts center and senior center, and questioned whether the scale of the proposed project was sufficient.

“I just don’t know if 30,000 square feet (of usable space) is sufficient for the uses that I envision for this specific building site,” he said.

A performing arts space could be added back into the plans, Kattreh said, agreeing, “It certainly would be a wonderful amenity for the community.”

She further explained that the design is far from final. The plans before the HRA were intended more as a “fit exercise.”

Gone from past plans for 5146 Eden Ave. is an elevated platform that would provide a green open civic space above a parking garage, a feature deemed too costly. City staff members reported that aside from being too costly, the elevated platform would prevent the possible future expansion of the public facility.

The new plans are also no longer intertwined with the private development, with a line now firmly delineating the public and private spaces. Also, development schedules are no longer timed to coincide, a prospect that drew criticism from Stewart.

“As a philosophical matter, I think it’s a bad idea to separate the development of the north and south parts of this,” he said.

As the public-private redevelopment plan continues to be formulated, Frauenshuh is seeking a low-interest loan of $1.2 million to help the developer satisfy the city’s affordable housing requirement. To do so, Frauenshuh plans to set aside 10 percent of the apartment complex’s floor area for housing that would be affordable for renters earning 50 percent of the area median income.

Those units would remain affordable for 15 years, a prospect lamented by officials including Hovland and HRA Member Mike Fischer.

“I just struggle all day long with the idea that we’re going to have affordable housing for 15 years,” Fischer said. “I’m all in on helping make the finances work if it’s for long-term permanent affordable housing.”

As for the land sale that would lead to the affordable housing, Edina Economic Development Manager Bill Neuendorf acknowledged that the purchase offer was not at the top of the market.

“It is within a reasonable range, however,” he said, adding that he pushed for a higher selling price to no avail.

The developer is arguing that one difference between Frauenshuh’s offer and the purchase price of the former school bus garage is the intended uses. A 165-unit senior living facility is planned for the neighboring site, while a less dense collection of all-ages apartments are planned for the site in question.

The HRA named Frauenshuh as the preferred developer for 5146 Eden Ave on June 28, but Stewart would rather see the 1.5 acres sold at public auction. “I don’t see any reason why Frauenshuh would have an exclusive on this,” he said.

The formal relationship between the city and the developer for the site is set to last until Sept. 30, according to Neuendorf.