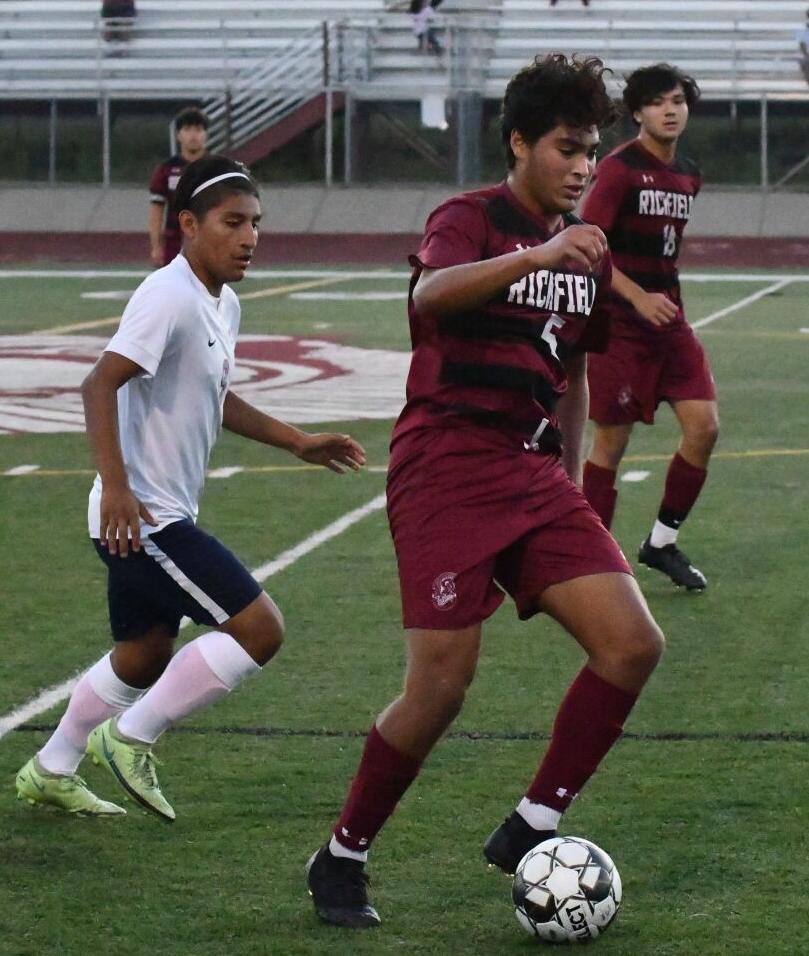 Richfield senior Belal Elghorab scored the lone goal in a 2-1 loss to DeLaSalle. 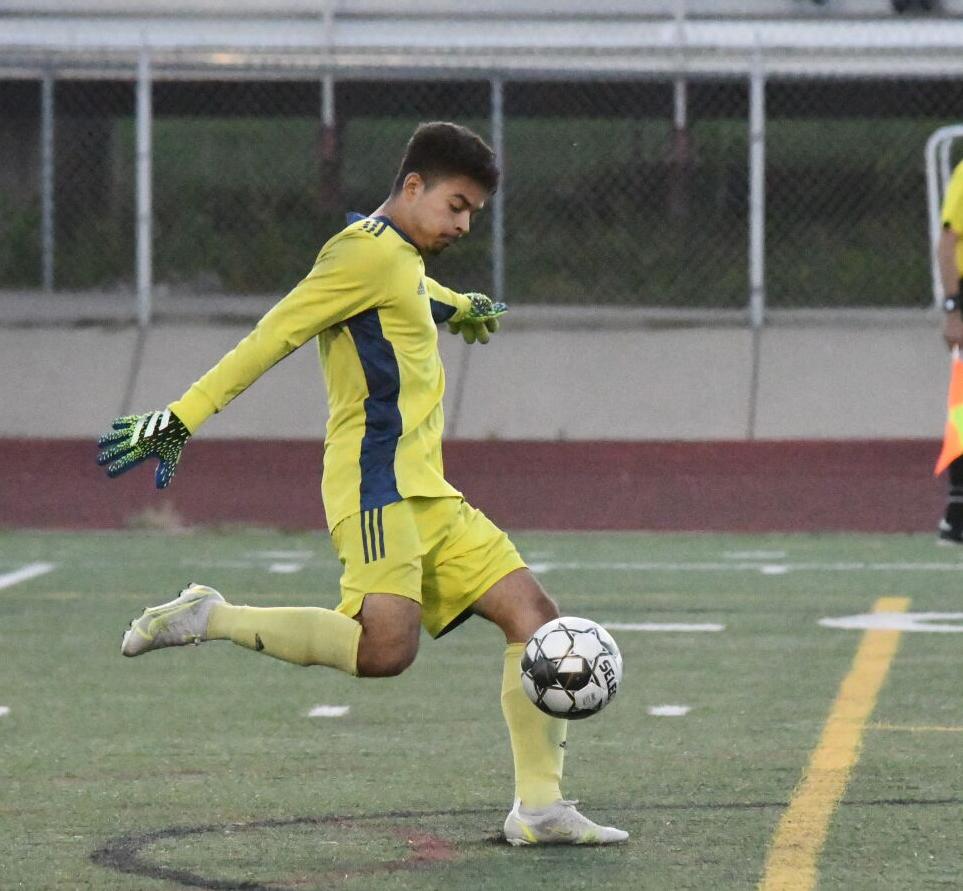 Richfield goalkeeper Carlos Luis Ibarra is a two-time All-Tri-Metro Conference selection including 2020 as a keeper and 2019 as a fullback. 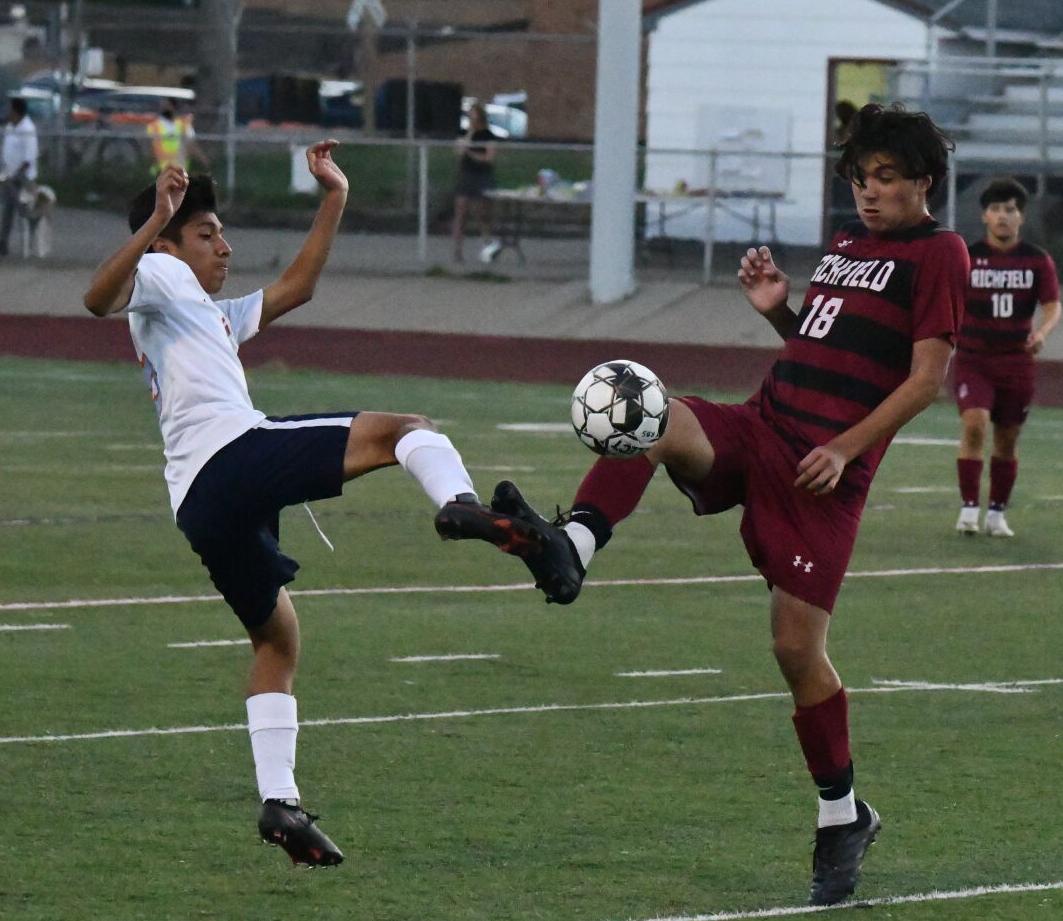 Spartans junior Luiz Sanchez goes airborne to reach a corner kick during the second half of a 6-0 win over Cristo Rey Jesuit at Spartan Stadium Sept. 7. 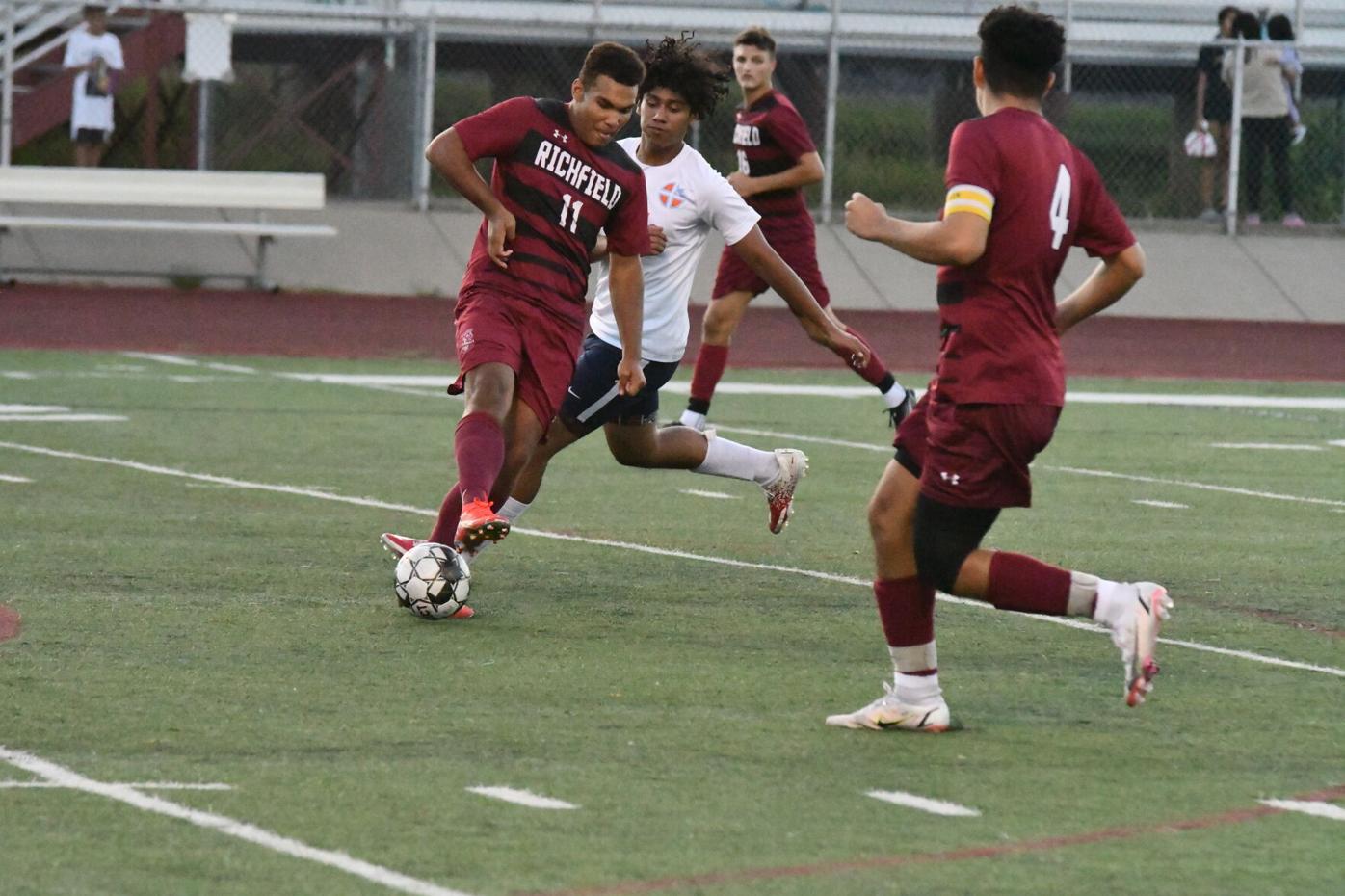 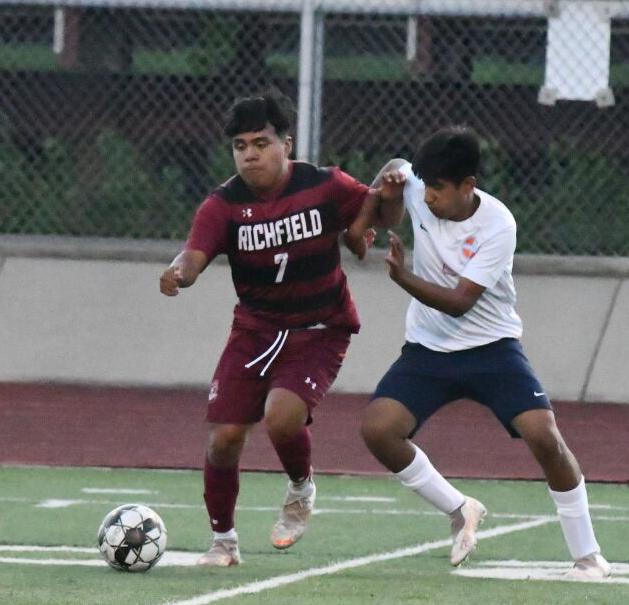 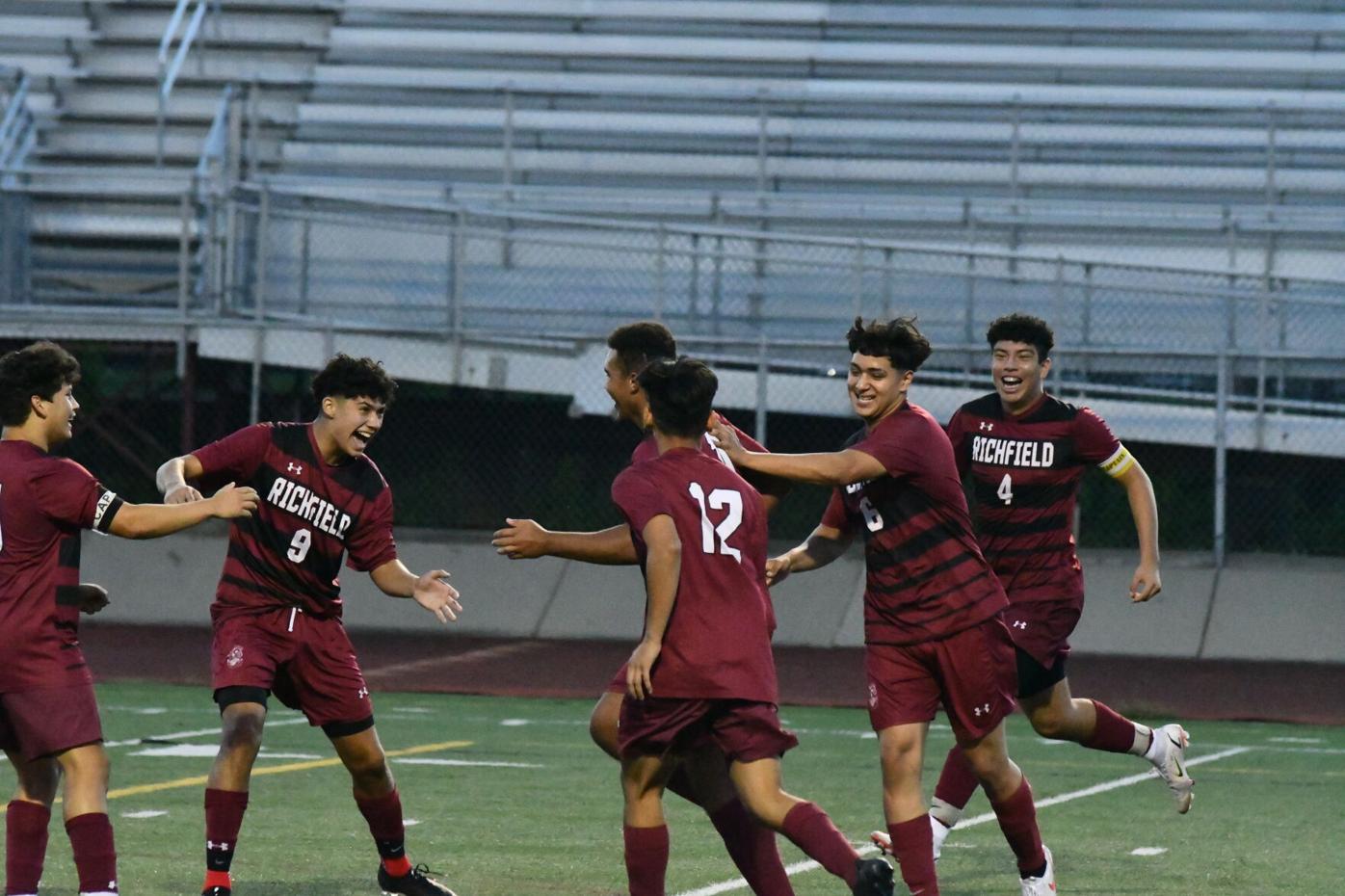 Richfield teammates celebrate after Rodrigo Castaneda scored in the second half of a 6-0 win over Cristo Rey Jesuit, Sept. 7. 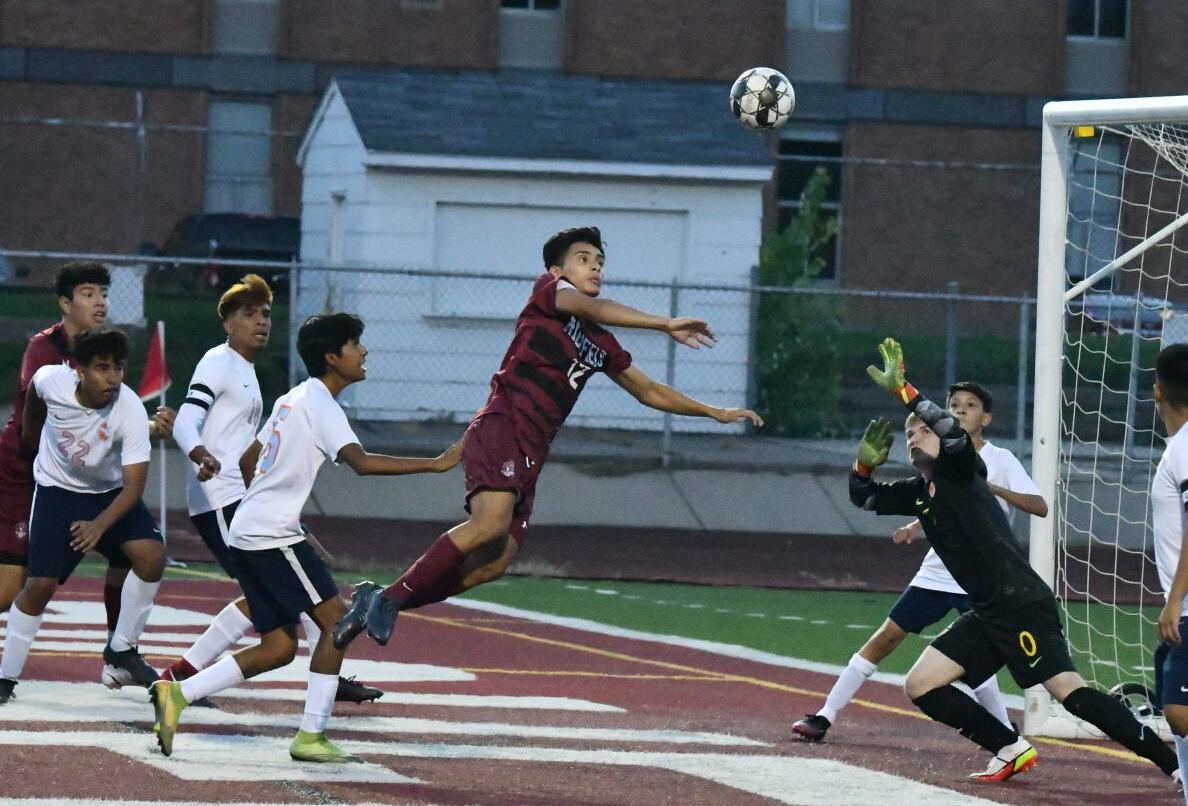 Richfield's Luiz Sanchez tries to get his head on the ball off a corner kick during the Spartans 6-0 win over Cristo Rey Jesuit Sept. 7. 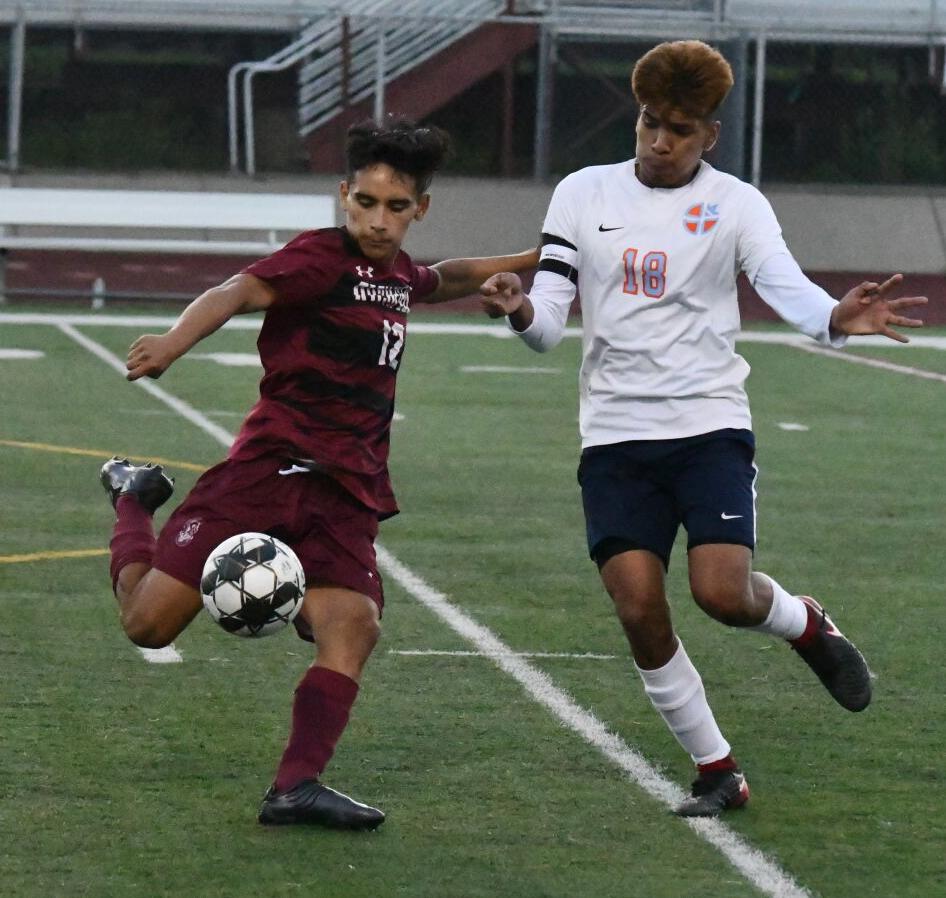 Richfield's Luiz Sanchez, left, knocks the ball away from a Cristo Rey Jesuit player during the Spartans 6-0 win in Richfield Sept. 7. 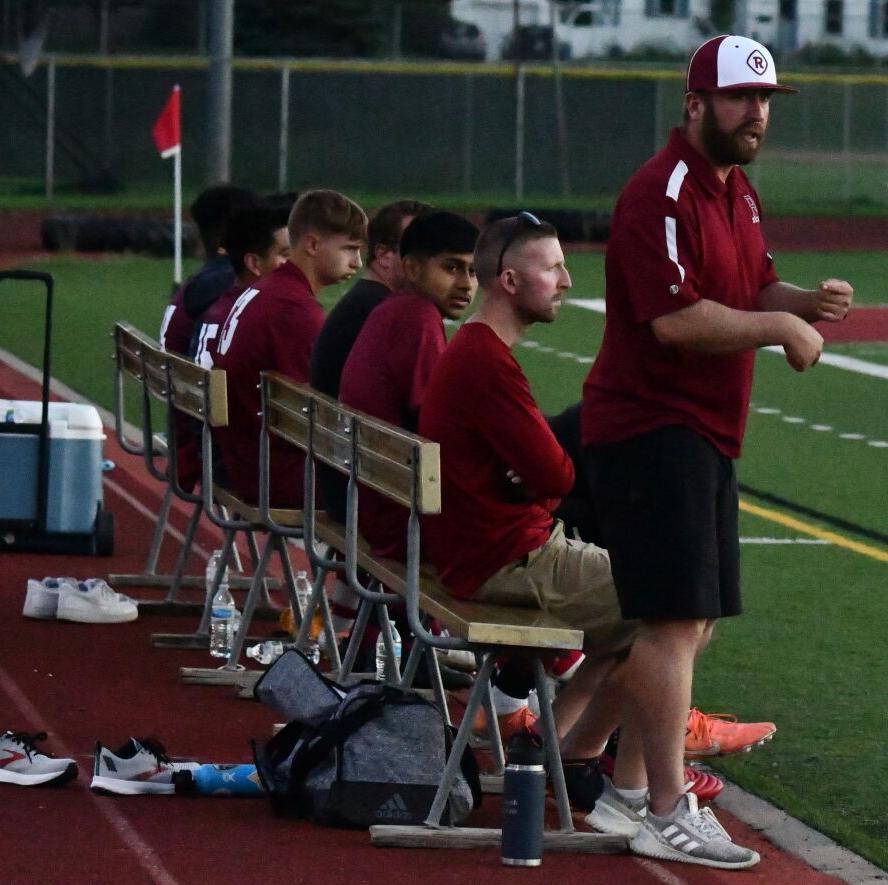 Richfield coach Mike Harris, right, has the team off to a 4-1-1 start. 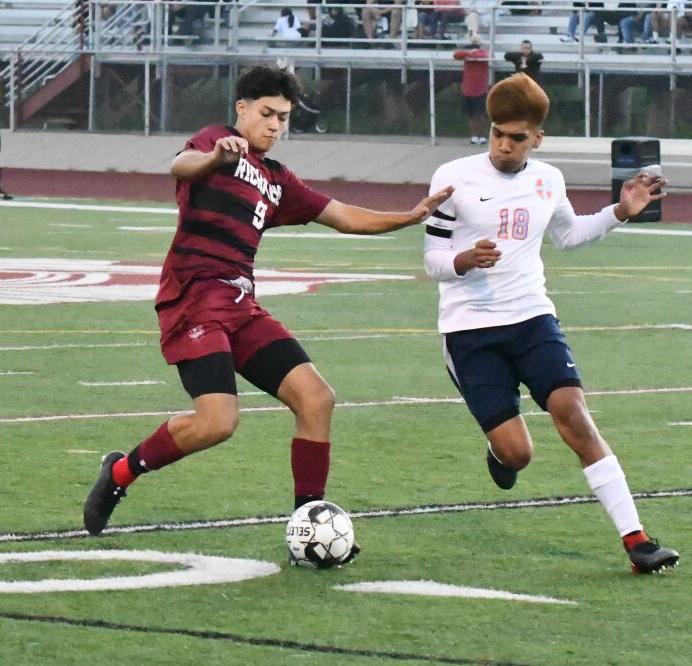 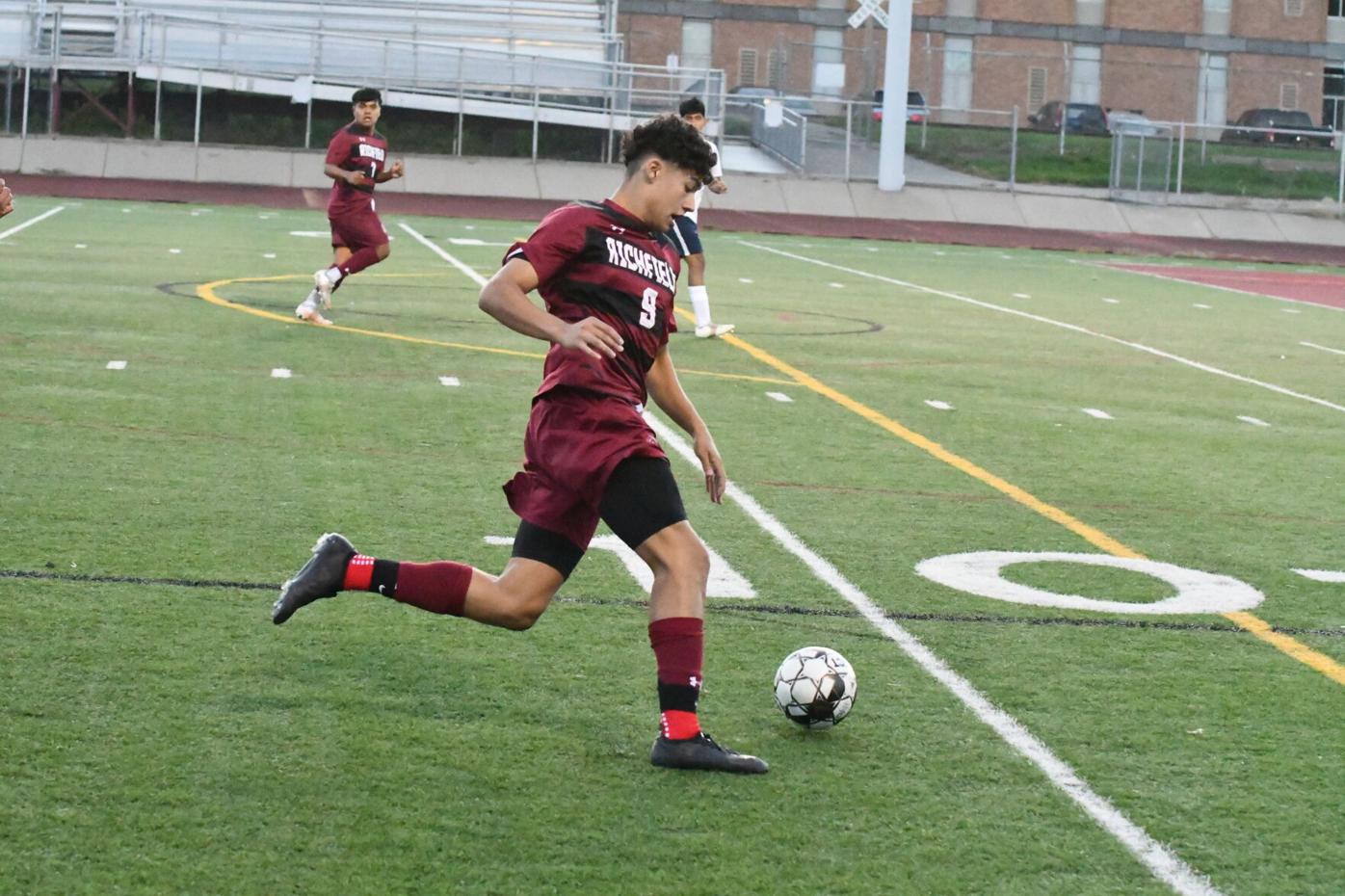 Richfield senior Belal Elghorab scored the lone goal in a 2-1 loss to DeLaSalle.

Richfield goalkeeper Carlos Luis Ibarra is a two-time All-Tri-Metro Conference selection including 2020 as a keeper and 2019 as a fullback.

Spartans junior Luiz Sanchez goes airborne to reach a corner kick during the second half of a 6-0 win over Cristo Rey Jesuit at Spartan Stadium Sept. 7.

Richfield teammates celebrate after Rodrigo Castaneda scored in the second half of a 6-0 win over Cristo Rey Jesuit, Sept. 7.

Richfield's Luiz Sanchez, left, knocks the ball away from a Cristo Rey Jesuit player during the Spartans 6-0 win in Richfield Sept. 7.

Richfield coach Mike Harris, right, has the team off to a 4-1-1 start.

After a 4-0-1 start to the season, Richfield couldn’t keep the string of games without a loss following a 2-1 defeat to DeLaSalle at Spartan Stadium.

Sept. 9 was a key contest in the race for the Tri-Metro Conference title, with only five matches being played to decide this year’s champion.

Richfield, the defending conference champion, was ranked second in Class AA in the latest state coaches association poll, having conceded just one goal over the previous five matches. DeLaSalle was sixth, with both programs combining for 33 goals through the opening two weeks of the season.

DeLaSalle scored in the opening minute of the game and added the winning goal in the second half with both goals scored by Gus Langford. Richfield tied the game late in the opening half when senior Belal Elghorab was credited with the goal in a game that coach Mike Harris described as a must-win for the race to the conference title, as odd as that sounds only a couple of weeks into the season.

Richfield went 1-0-1 against the Islanders last season, winning 3-2 then drawing 1-1. The teams will meet again in Minneapolis Tuesday, Oct. 5.

The Spartans opened with wins at Hastings, Blake and Apple Valley, outscoring the opposition 12-1 before a scoreless draw in the conference opener at Columbia Heights on Sept. 2.

“It’s a tough field with grass, narrow and bumpy which makes it tough to score and Columbia Heights has a really nice team,” coach Mike Harris said.

Jesuit Sept. 7 in another complete-game showcase of what is possible for this veteran squad.

“He’s been the best player out there most games,” Harris said. “He’s gotten faster and stronger.”

Rodriguez was hurt in the section quarterfinals last year and says he is back to 100 percent. “I want to do big things again this year after we won the first conference title in a long time for the team and this school. We are all focused right now,” Rodriguez said.

Castaneda scored on a free kick from less than 20 yards out in the second half. The ball skipped off the turf, off the Pumas’ goalkeeper and into the upper reaches of the net. The goal made up for an earlier penalty kick miss in the opening minute against Apple Valley in the home opener. Richfield also hit the crossbar but couldn’t find a goal in a scoreless opening half against the Eagles who played a defensive style to frustrate Richfield.

The program is also enjoying some height this season, to compete in the air on set pieces with the likes of a second-year varsity player like 6-foot-3 Angel Mendez Lopez and Bishop, who is 6-2.

Two goals in the second half came from a more organized offensive attack.

“That’s been the trend, 17 goals and one against in five games the distribution is there,” Harris said. “Last year we had Miguel [Leon Alvarado], maybe if we had him back we beat Columbia Heights because he would’ve scored the goal but then when we played Holy Angels in the section finals they surrounded him with three guys and didn’t score.”

The team is playing a more possession style, which they’ve developed over years of playing together, going back to the youth levels with Richfield Soccer Association.

“We all just know each other,” he said. “We’ll text each other and meet up at a park. Those pickup games is where we get so much better.”

They play at Washington Park, Christian Park or futsal in school parking lots. “We just love to play,” Rodriguez said.

As for reaching the section final last year, Rodriguez said it felt like a state tournament game to them and they want that feeling again. Last year they played Holy Angels for a third time to decide the section champion.

Rodriguez plans to move to Richfield Soccer Association this summer after that group beat his Kelix Intra club twice over the summer.

Coming into the season, Richfield knew they needed to find more scoring without the services of Mr. Soccer candidate Miguel Leon Alvarado who finished with 16 goals and 12 assists in 10 games.

“The idea of now having five consistent guys to put the ball in the back of the net and a couple new kids put the ball in the net and with our goalkeeper [Luis] Carlos [Ibarra] – the one goal was a free kick on the edge of the penalty box, that’s the only one that beat him. They kicked it over the wall and not the goalie’s fault. He’s played pretty flawless.”

Two-time All-Conference goalkeeper Carlos Luis Ibarra made one save to give him 16 stops in nearly 400 minutes leading up to the Islanders match.

Ibarra played club soccer with Urban Ventures over the summer at USA Cup and the Wisconsin Cup.

The draw against Columbia Heights helped refocus the team after quick starts against No. 3 Blake and  Apple Valley.

“It helps us a lot to score early, to take the pressure off and motivate us to score even more,” Ibarra said.

He focuses on keeping the defense free from distractions, knowing the other team is desperate to find a goal.

Junior Luiz Sanchez is the only new contributor coming off the bench with two goals and an assist.

Sophomore Antwane Ruiz made a big impact on the squad last season coming off the bench to score nine goals. So far this season he has three goals as a starter, including two goals in a 5-1 win over Blake on Aug. 28.