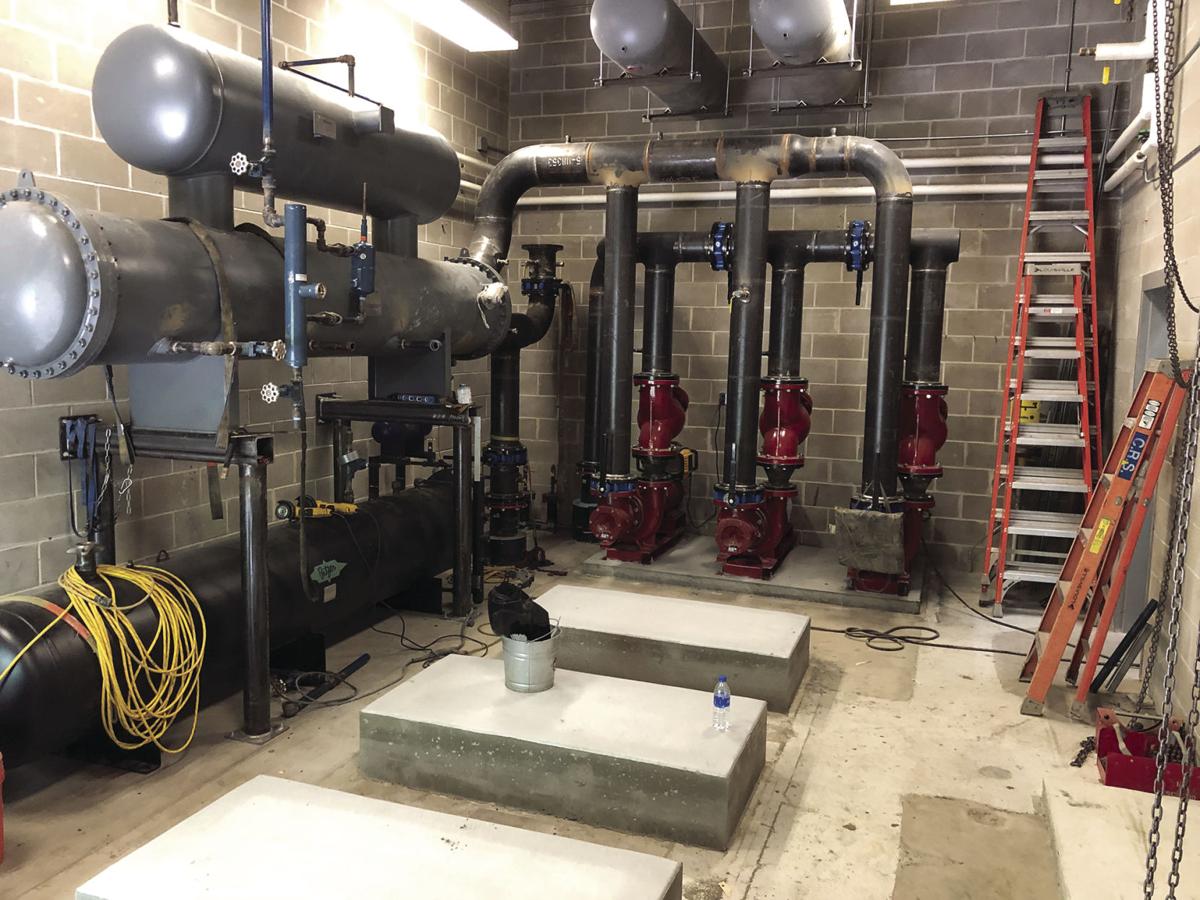 A look into the mechanical room which will support ice sheets on Rink 1 and 2 at Richfield Ice Arena. 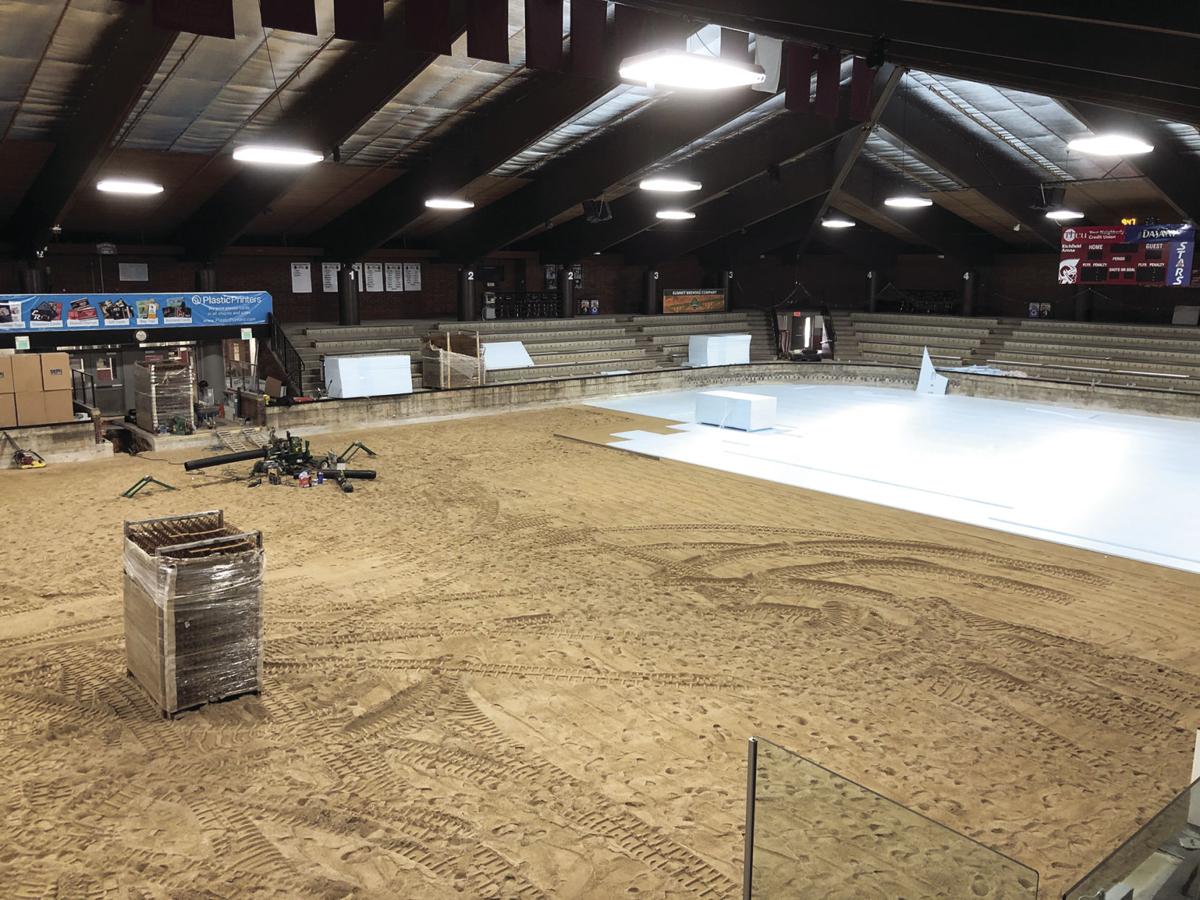 The sand-based floor inside Rink 1 at Richfield Ice Arena is being removed in favor of a concrete floor which will provided a more level ice sheet and also allow for a wide range of events when the ice is not in place. 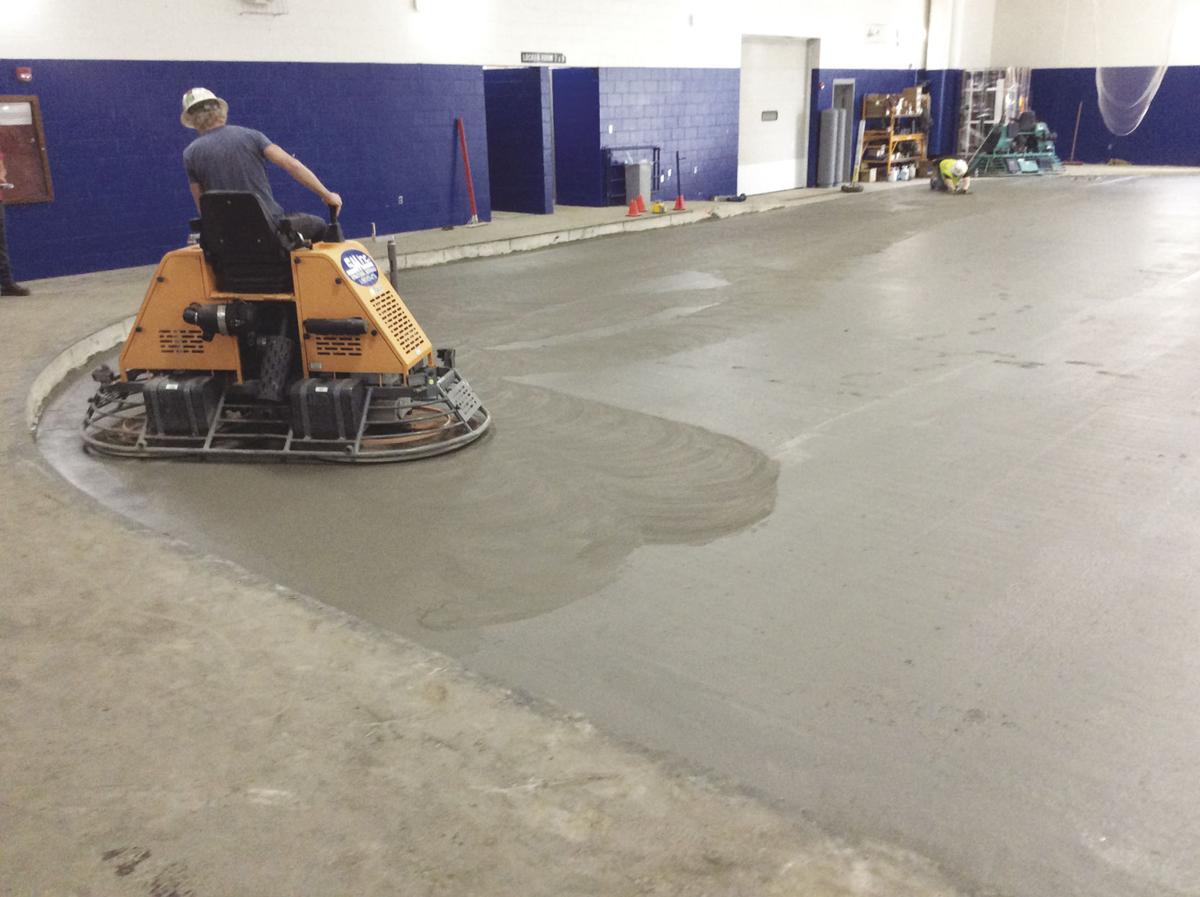 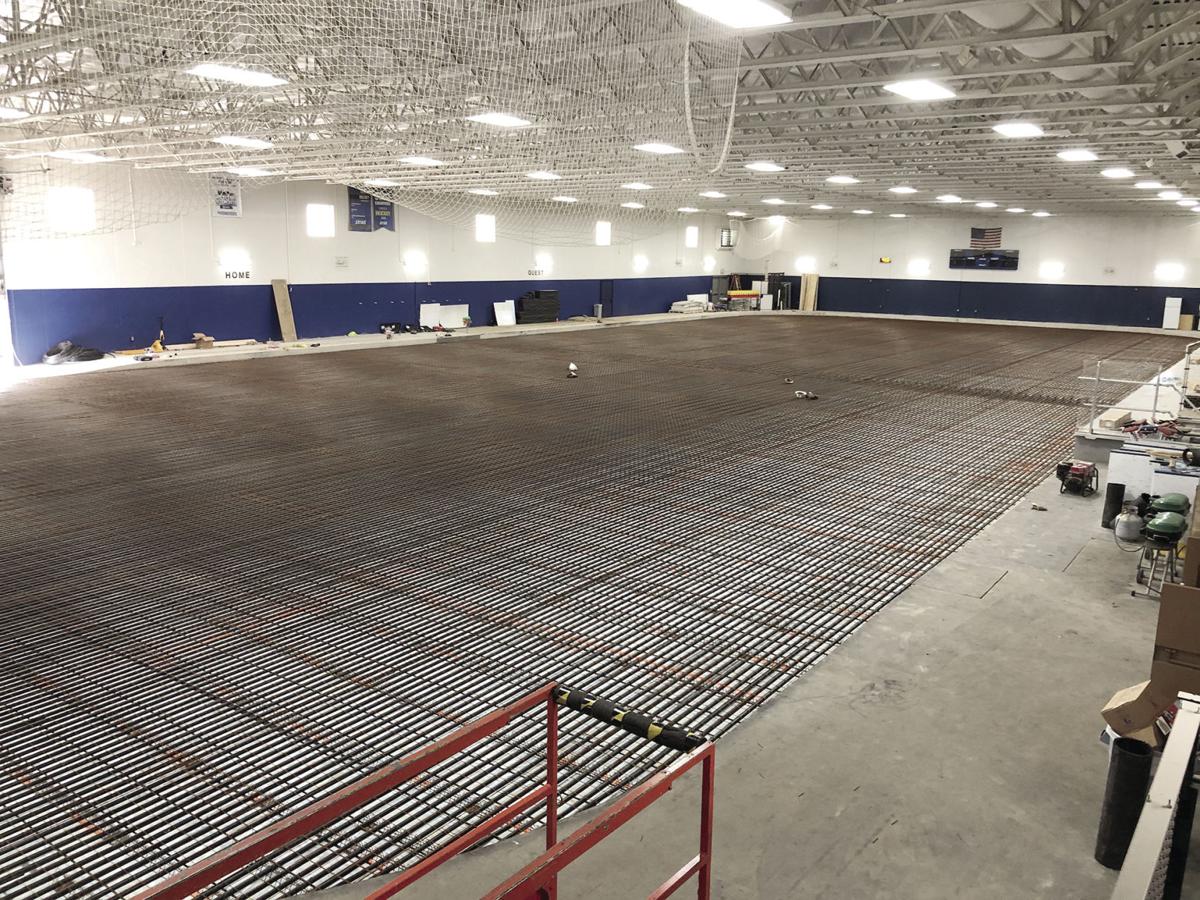 Before the concrete was poured on Rink 2, the piping and infrastructure was put in place to ensure ideal ice for decades to come in Richfield. 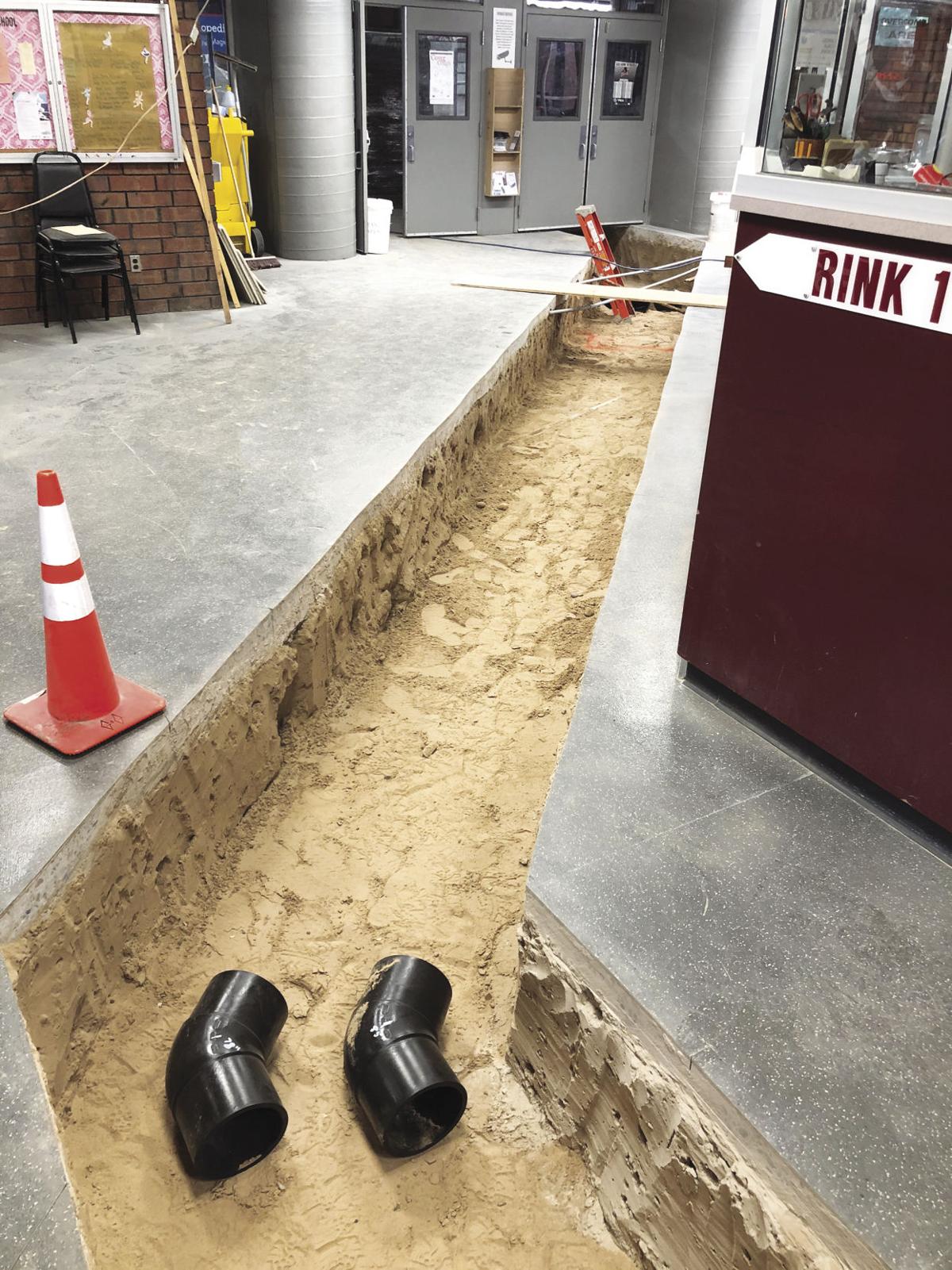 A trench was dug between the two ice sheets at Richfield Ice Arena as one condenser unit will serve both rinks instead of a dedicated condenser for each rink.

Planned improvements at Richfield Ice Arena for the summer were moved up due to the coronavirus pandemic shutdown.

Two major components of the project include replacing both ice rink condensers, which use R-22 refrigerant, with one condenser to serve both rinks with an ammonia and glycol liquid to keep the ice at the right temperature.

Along with replacing the necessary infrastructure for both rinks, Rink 1 will be transformed from a sand-based floor under the ice to concrete to take advantage of the time when ice is not needed, typically March and September.

“Once COIVD hit, we knew rink 1 would be out a long time so it didn’t make sense to keep the ice in and get the project up and running to complete it faster,” he said.

The old condensers used a refrigerant called R-22 which is no longer being made or sold in the United States.

Weiby estimates the savings from going to a more efficient condenser is approximately $30,000, while replacing two aging units, one over 40 years old and the other 20 years old. He says the lifespan of a condenser is about 15-20 years. “Both condensers were on their last legs,” he said. “We’re going to one system so fewer compressors and less maintenance should reduce the costs.”

Replacing the sand floor on Rink 1 with concrete serves two purposes. Weiby says the more solid floor will help create a more consistent (and level) ice surface and improved ice conditions. Another reason is the ability to use the floor once the ice is removed for various events inside what is one of the more iconic venues in the area. Rink 1, the original indoor ice arena in Richfield, offers a lot of charm with the exposed wood rafters and seating around the entire floor for a wide variety of events including corporate outings, craft fairs, community gatherings or with removable turf, an indoor area for soccer, lacrosse, baseball or softball programs to utilize.

“Typically the time around the state hockey tournaments we are actually quiet and then again in late August and September,” Weiby said as it takes three to five days to build a perfect sheet of ice from the ground up.

The goal is to have the floors on both rinks usable by August.

Weiby noted no taxpayer money was used in the project. Funds were used from the sale of Rich Acres Golf Course to Metropolitan Air.

A major tenant of the ice arena is the North American Hockey League’s Minnesota Magicians, which are in the eighth of a 15-year lease. Weiby said it has been a good partnership. “They bring a lot to the table and add another element to the community.”

In addition to the junior hockey played October through May, the Magicians volunteer their time whenever possible. They partnered with Richfield Public Schools to help all fourth graders learn to skate at RIA over the winter.

ETS Sports Performance operates the training center to the left of the main entrance between the two rinks with a current four-year lease. “They work with high schoolers and have other athletes coming into workout,” Weiby said. ETS operates 10 locations throughout the Midwest.

The arena makes the most money through tournaments, of which there are typically around a dozen throughout the year. According to Weiby, the goal is to build on that with the upgraded infrastructure. Next spring RIA will busier than usual with six tournaments in a row from April through the end of May.

“That’s what this building is made for,” Weiby said. The AAA programs not only purchase ice time but add to the local economy through food, lodging, entertainment and shopping.

The Richfield Curling Club calls Rink 2 at RIA home with houses dotting the rink for the last two years. Don’t worry, the rocks and brooms will soon return to the ice.