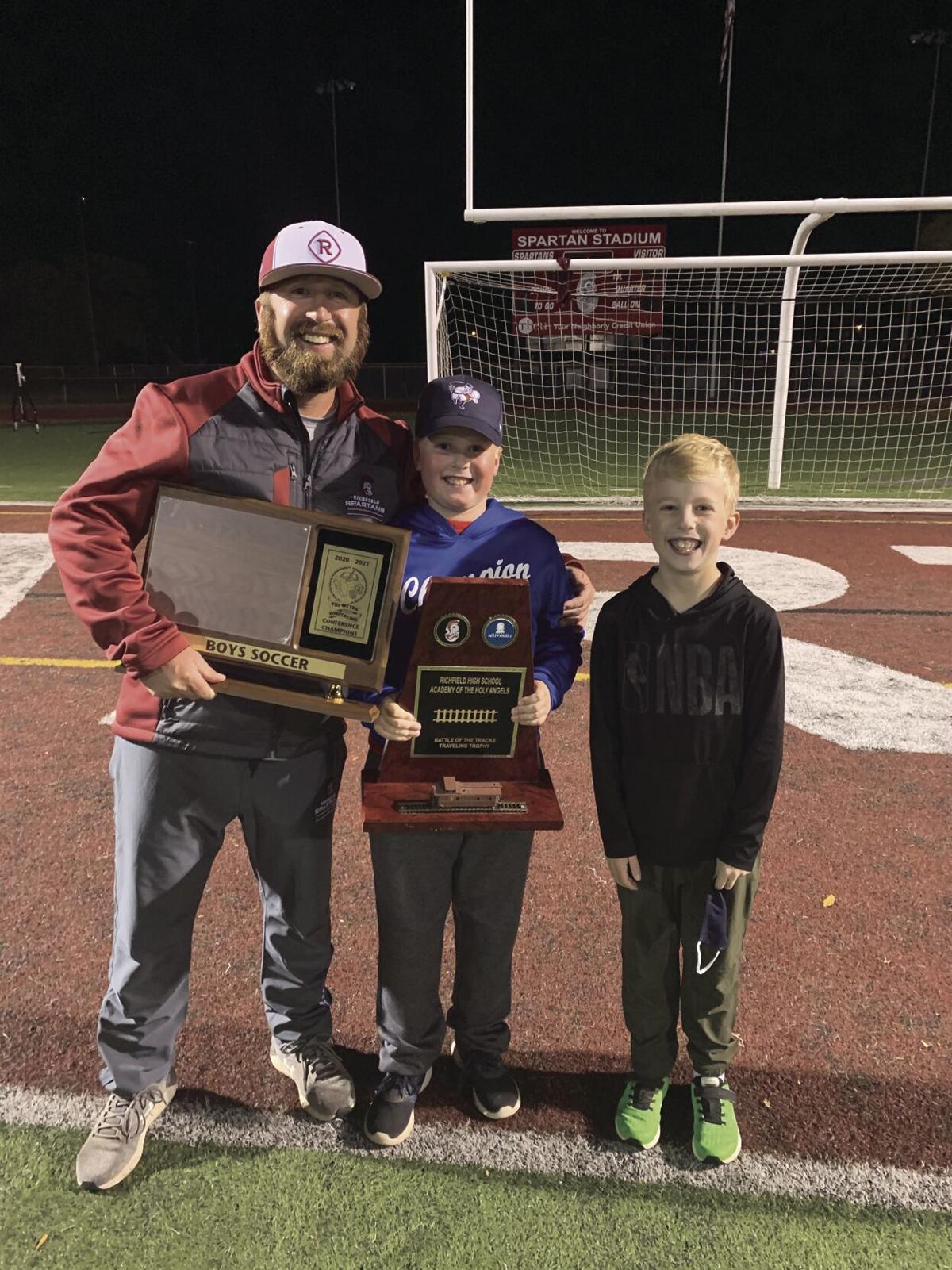 Richfield Boys Soccer coach Mike Harris, left, poses with sons Will, 10, and Lou, 8, with the Tri-Metro Conference and traveling trophy between Holy Angels and the Spartans following Richfield’s win on Sept. 29. 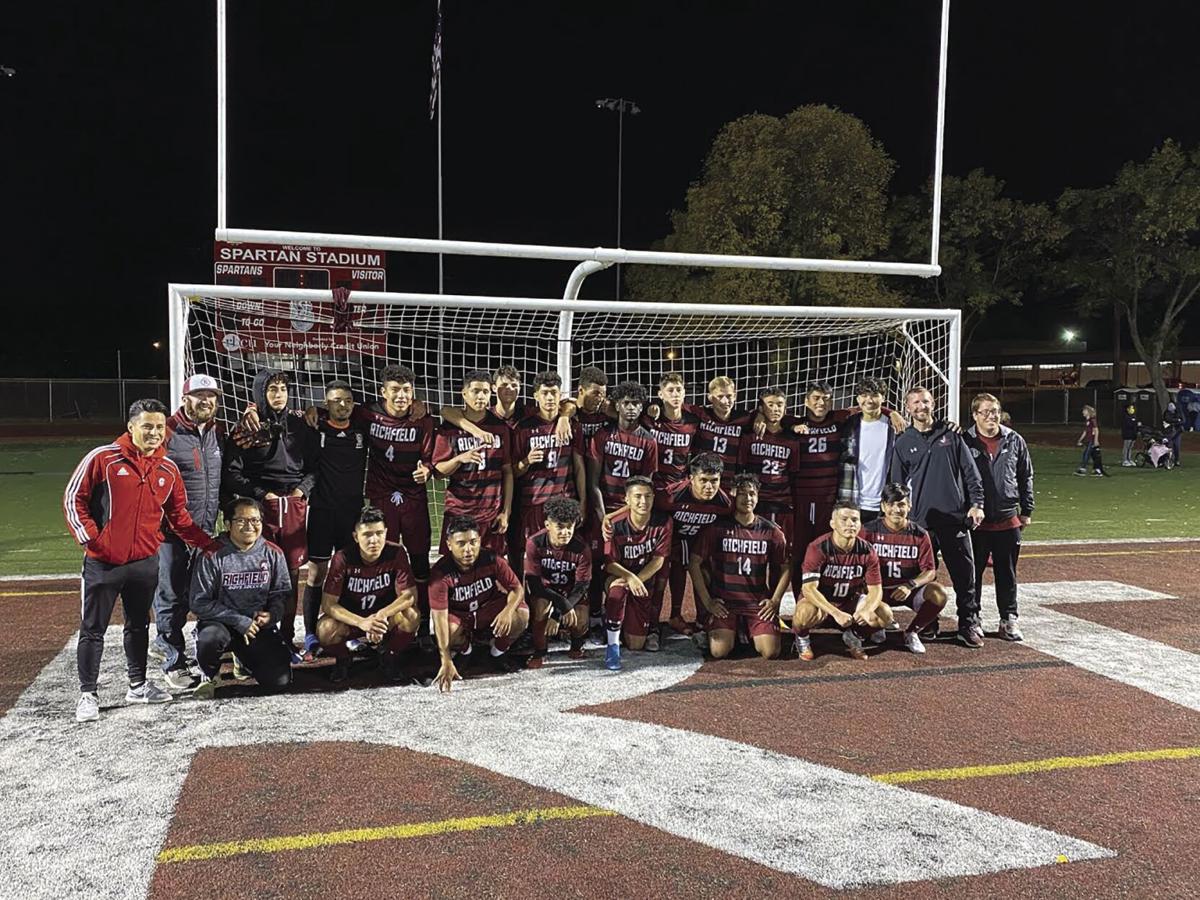 Members of the Richfield High School boys soccer team pose in front of the goal at Spartan Stadium after a win over Holy Angels in October. The Spartans went on to post a 10-2-2 record and reached the section final for a third meeting against the Stars. 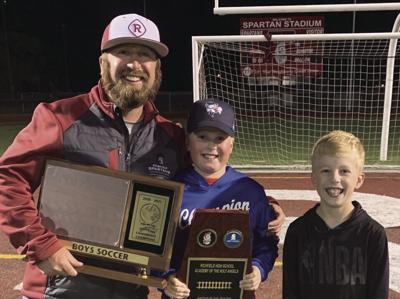 Richfield Boys Soccer coach Mike Harris, left, poses with sons Will, 10, and Lou, 8, with the Tri-Metro Conference and traveling trophy between Holy Angels and the Spartans following Richfield’s win on Sept. 29.

Members of the Richfield High School boys soccer team pose in front of the goal at Spartan Stadium after a win over Holy Angels in October. The Spartans went on to post a 10-2-2 record and reached the section final for a third meeting against the Stars.

Two decades into his tenure coaching boys soccer at Richfield High School, coach Mike Harris is seeing the dedication and hard work from many in the Richfield community begin to pay off.

The coach was honored by his peers as the Class A State Boys Soccer Coach of the Year, an award presented by the state soccer coaches association.

“Pretty humbling,” Harris said of the honor. “We have a huge soccer community here in Richfield with RSA [Richfield Soccer Association], all of the coaches are alumni and we have quite an active alumni group at RHS. Everyone put in a lot of work to get us to this point to be up there with the Brecks, Blakes, Holy Angels and so it was really neat for our kids to experience that success this year.”

Harris credits the work put in by assistant coaches John Niday, Stanley Luke, Scott Jenkins, and Angel Dominguez Reyes to do a lot of the critical work to help the players develop and figure out how to play and compete at the high school level. Dominguez Reyes coaches two summer teams in addition to the sophomore team.

Those coaches, along with Harris, are part of a greater seven-year plan to help build a sustainable soccer community in Richfield along with RSA president Betsy Lindow and boys competitive director Carrie Wolke.

“We’ve had a big push to connect those two things [high school and community soccer programs] using a six to seven year plan after talking about it for a long time,” Harris said. “And to see it all come to fruition is pretty special.”

The fruition part is going from a community-based association led by volunteers to a well-respected high school varsity program.

RSA generated Mr. Soccer finalist three times out of the last five seasons. “Not very many schools have a successful local club made up of only local players.

“It’s been so fulfilling to be a part of this program, knowing how amazingly long it takes to get it done,” Harris said as he started with the program in 2000. “We preach accountability and coachability and this year we got a little bit of talent but the difference was that everyone was buying into the work as a team and staying together.”

Harris said he’s watched this group of juniors since they came into the program in seventh grade, “and they’ve won at every level.”

The program had a donor step up this season to fund uniforms, warm-ups and bags for the players to help build that identity.

The Spartans handed Holy Angels their own blemish of the season, a 1-0 loss at Richfield High School on Sept. 29. The reigning Class A state champion Stars won the rematch 3-2 Oct. 6 and captured the Section 3A title by a 4-1 win over Richfield on Oct. 24.

Because of Richfield’s location, they have moved sections quite often, even moving up to Class AA for some time, all with Harris leading the way.

While playing AA, Richfield would face Wayzata, Washburn, Eagan, Woodbury, and Rosemount quite often until 2019 when the team returned to Class A.

“Going up to a Class AA schedule really prepared us for what to expect this year,” he said. “We went up a class and play against those top programs and they learned what it was all about to play varsity soccer.”

Eight freshmen started in a 7-1 section loss to Washburn. Harris used the opportunity as a learning experience to help mold the squad he wanted to see into a reality, patterned after Washburn and Wayzata.

Halfway through the 2019 season, the first in Class A and the Tri-Metro, Harris felt a switch in confidence coming off a 1-0 overtime loss to DeLaSalle before winning the next match against Minnehaha Academy 3-2. Richfield went on a 9-match streak without a loss to go 9-0-1.

A big takeaway Harris learned from playing AA soccer was the depth necessary to compete. “If you have a weakness, they will expose it at Class AA,” he said after playing 15-16 guys this fall with nine starters back for the 2021 season.