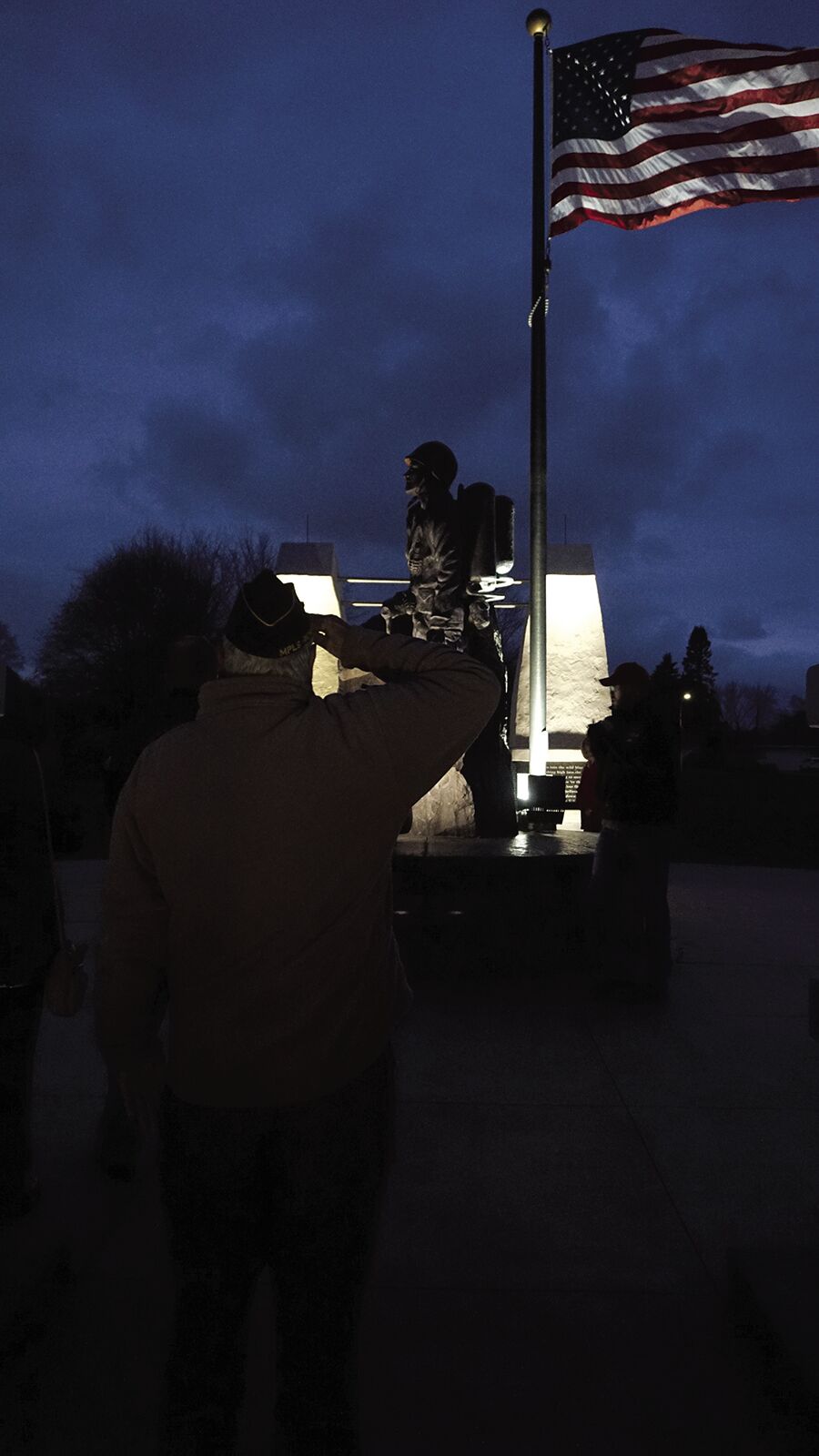 During the closing moments of the Veterans Day program held at the Honoring all Veterans Memorial in Richfield Nov. 11, a veteran gives a salute to all those who have served. 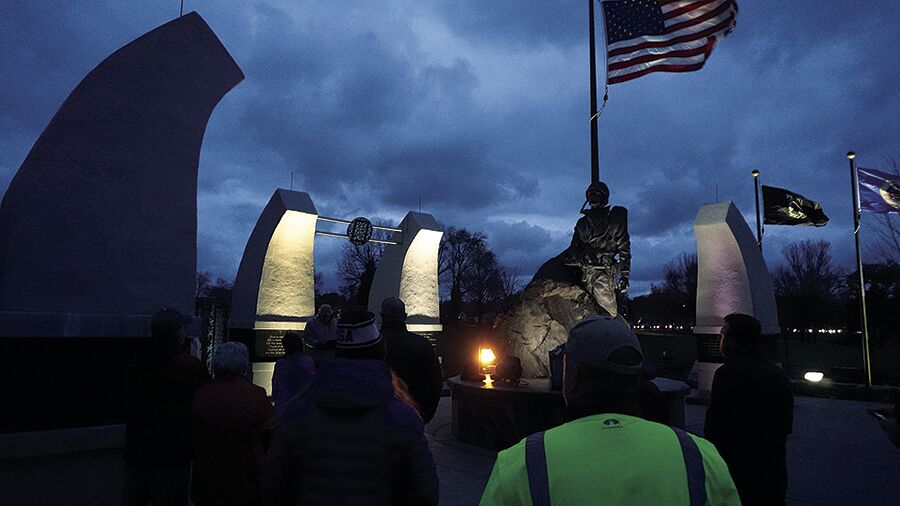 A couple dozen people attended the Veterans Day program at the Honoring All Veterans Memorial in Richfield on Nov. 11. Twenty-seven veterans' names recently added to the memorial were unveiled. 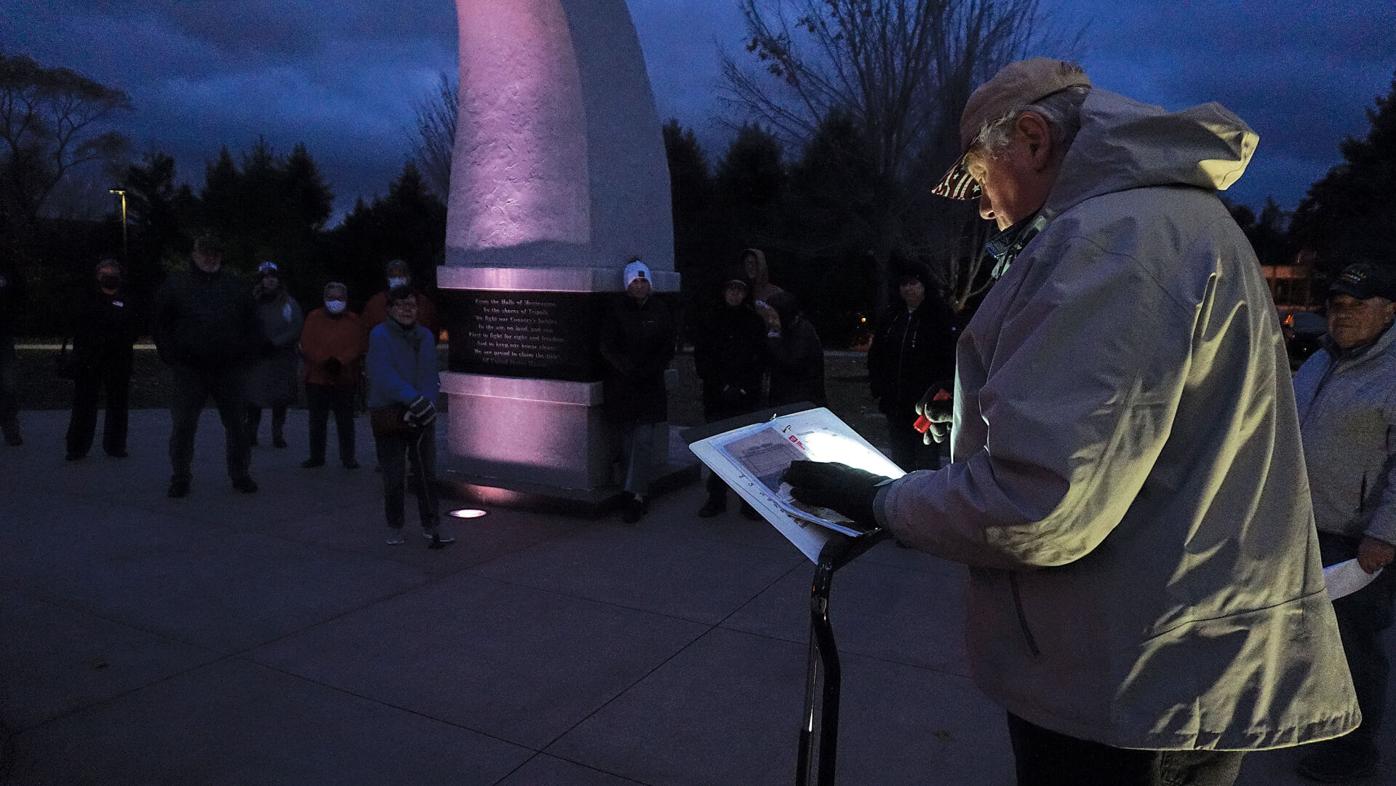 Don Belkengren (right) reads the names of the 27 veterans added to the Richfield Honoring All Veterans Memorial on Thursday, Nov. 11. 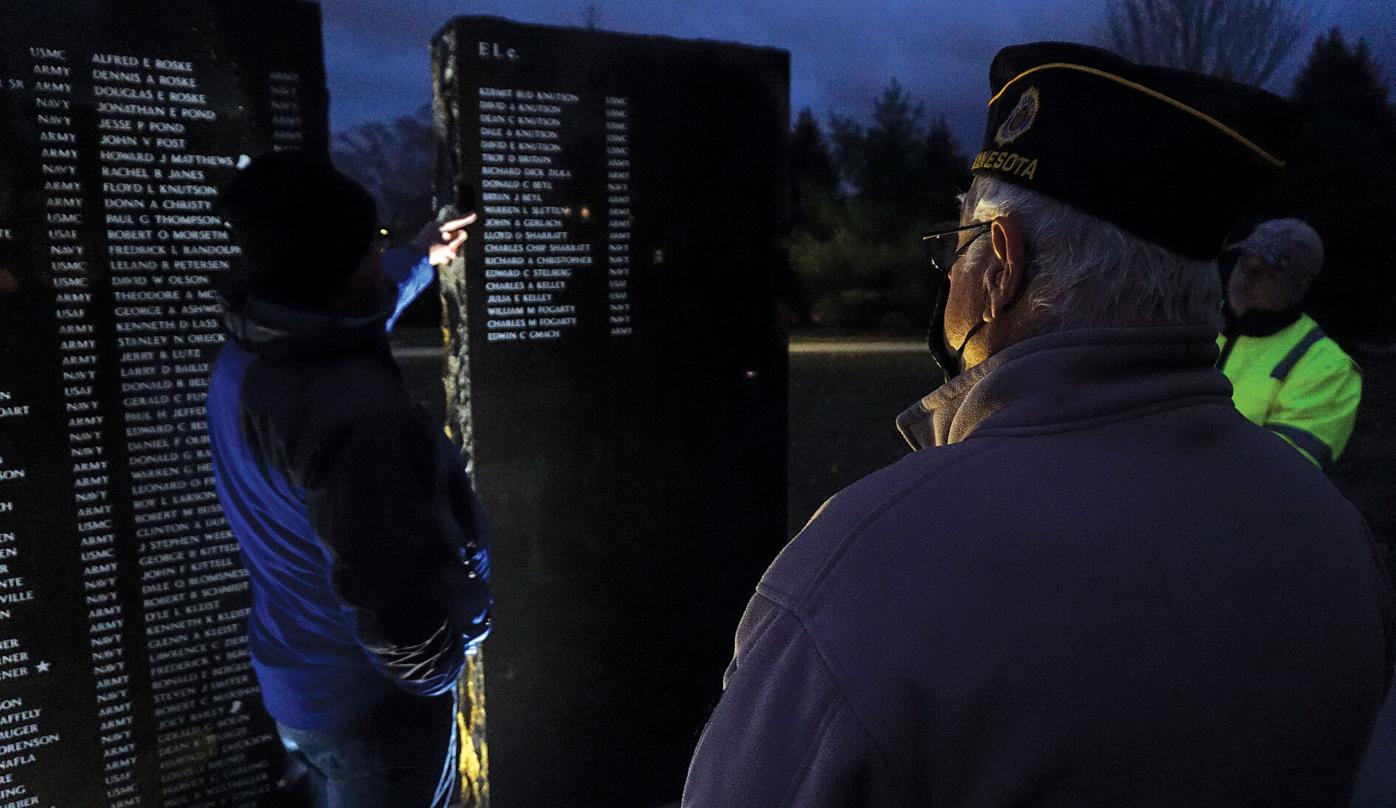 As the names of the 27 veterans were read aloud during a Veterans Day program at the Honoring All Veterans Memorial in Richfield Nov. 11, an attendee points to each as it’s read.

A couple dozen people attended the annual Veterans Day program in Richfield Nov. 11, witnessing the unveiling of 27 veterans’ names recently etched into the walls at the Honoring All Veterans Memorial.

In all, there are more than 1,100 names included on the walls of the memorial.

With a November gale whistling through Veterans Park, the memorial president, Don Belkengren, led the crowd in a recitation of the Pledge of Allegiance before explaining the purpose of the cold-weather gathering.

“Tonight we are here to honor the veterans whose names have been placed on the memorial, but also all veterans who served to preserve the liberties we now enjoy. It is now our duty to remember the men and women who continue to serve our great country and those who did so honorably in the past,” he said.

In laying out the history of Veterans Day, Belkengren said, “In 1918, on the 11th hour of the 11th day of the 11th month, the major hostilities between the United States and Germany ended. They celebrated this day because the president of the United States, Woodrow Wilson, issued an order to celebrate the 11th of November as the first commemoration of Armistice Day.”

Known initially as Armistice Day, the change to Veterans Day came after the Korean War in 1954.

“After lobbying efforts in veterans service organizations, the 83rd Congress amended the 1938 accord and made Armistice Day a holiday, striking the word ‘Armistice’ in favor of ‘Veterans,’ Belkengren said. “President Dwight D. Eisenhower signed the legislation on June 1, and from then on, Nov. 11 became a day to honor American veterans of all wars,” he added.

Turning his attention to the present day, Belkengren declared, “Today we are here to add these names to the Honoring All Veterans Memorial. It is my honor to recognize these veterans.”

The names of veterans recently etched into the walls were announced by Belkengren, followed by the faux volley of three mini-cannon shots into the windy, cold air of Richfield. The names of the veterans added to the memorial and read aloud are as follows:

The names of the veterans added to the memorial and read aloud are as follows.

The program concluded with the playing of “Taps.”