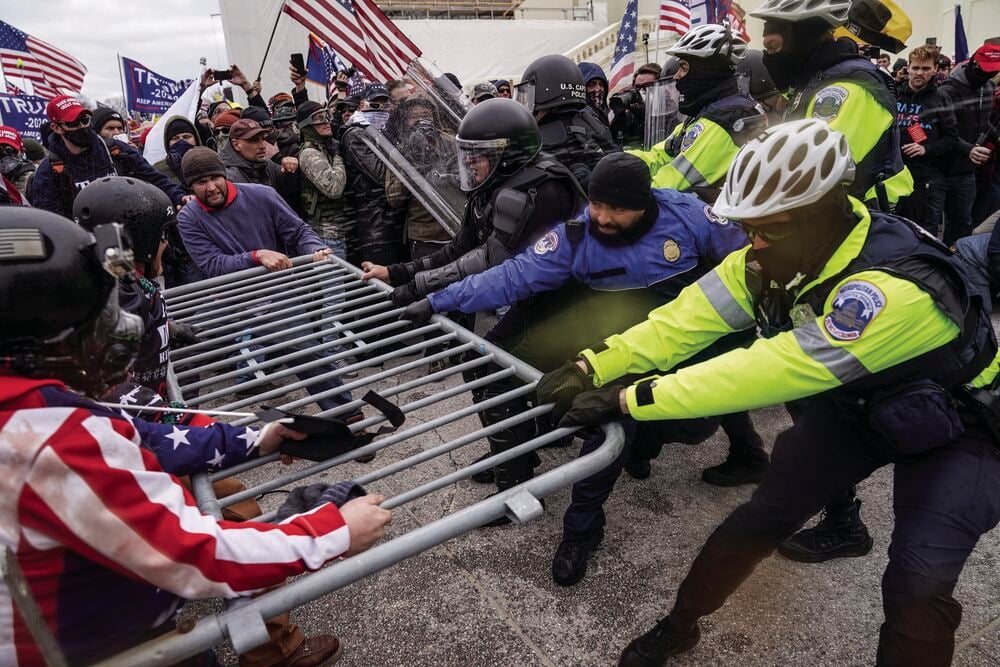 Trump supporters try to break through a police barrier Jan. 6 at the Capitol in Washington, D.C. As Congress prepared to affirm President-elect Joe Biden’s victory, thousands of people gathered to show their support for President Donald Trump and his baseless claims of widespread election fraud. (AP Photo/John Minchillo) 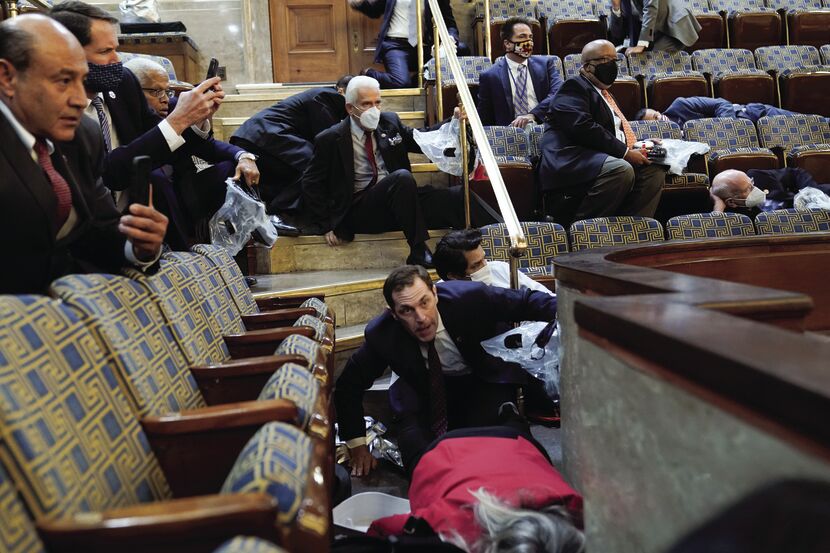 People shelter in the House gallery as protesters try to break into the House Chamber at the U.S. Capitol Jan. 6 in Washington, D.C. (AP Photo/Andrew Harnik)

Trump supporters try to break through a police barrier Jan. 6 at the Capitol in Washington, D.C. As Congress prepared to affirm President-elect Joe Biden’s victory, thousands of people gathered to show their support for President Donald Trump and his baseless claims of widespread election fraud. (AP Photo/John Minchillo)

People shelter in the House gallery as protesters try to break into the House Chamber at the U.S. Capitol Jan. 6 in Washington, D.C. (AP Photo/Andrew Harnik)

Following a mob’s Jan. 6 breach of the U.S. Capitol building, elected leaders representing Edina condemned the riot and called for the impeachment of President Donald Trump for inciting the violence.

Sen. Melisa Franzen (D-Edina) authored a resolution calling for the Minnesota Senate to officially condemn the attack on the U.S. Capitol and the nation’s democracy.

“This is beyond partisanship. If anyone has any doubt that what happened was nothing short of a coup, then you’re not paying attention,” Franzen said. “This is something that’s never been seen ... in our lifetime and it cannot be repeated. So it’s up to all the elected leaders to either condemn it or acquiesce by their silence.”

Rep. Heather Edelson (D-Edina) said she was shocked by the disrespect shown to the nation’s capital through the riots.

“All of these institutions need to be preserved. They are the symbols of our democracy. And no violent riot that’s incited by an elected leader of this country (who) has disregard for our processes will change that,” she said.

“It’s something that you never thought you would see not just in a workplace, but in our state capitol, which is the pinnacle of and the symbol of our democracy,” Franzen said.

Apart from some worry about violence at the State Capitol, Edelson added that a couple members of the Minnesota House of Representatives had a group of the same “Stop the Steal” movement supporters show up at their homes. Rep. Steve Elkins (D-Bloomington) spoke of a concern for personal safety.

“We’re all on high alert that this has been happening,” he said.

Elkins said of the riots at the U.S Capitol, “To me, it is a clear case of sedition and should be prosecuted as such.”

The Senate District 49 Republicans were unavailable for comment on the Capitol invasion prior to publishing.

The riots, which followed a Trump rally that took place near the White House, prompted Vice President Mike Pence and members of U.S. Congress to take cover. The riot resulted in five deaths, including a Capitol police officer. One woman was shot by a police officer inside the Capitol and died, and three others died from medical emergencies, according to Washington, D.C. Police. The Capitol Police officer died after physically engaging with the rioters, Capitol Police said.

The rioters, who were largely made up of those alleging the election was “stolen,” delayed but did not prevent the certification of electoral college results for President-elect Joseph Biden Jr. Apart from the mob, 147 Republicans in Congress tried to object to the certification, alleging unsubstantiated claims of voter fraud – a sentiment that Trump has continued to fuel. The attempt failed.

During the riots, Trump tweeted out calls for peace, later uploading a video telling his supporters to leave. “We love you, you’re very special,” he added.

Twitter has banned Trump’s account on the social network, citing a risk of further incitement of violence, especially leading up to the Jan. 20 inauguration of Biden.

On Jan. 10, Omar tweeted her plans to introduce two articles of impeachment the next day. One of the articles, she writes, is for abuse of power for attempting to overturn the election results in Georgia. This refers to a call that Trump made to Georgia’s secretary of state to “find votes” of fraud.

The second article is for incitement of violence, specifically for “orchestrating an attempted coup against our country,” the tweet reads.

“Donald Trump remains the single greatest threat to our democracy,” Omar said in a statement. “Every day that he remains in the office of the presidency – overseeing the United States military and nuclear arsenal – is a day the safety of the American people and the world are threatened.”

“No more lies. No more pardons. No more destruction. No more enabling. No more sedition. No more tolerance. The President must be removed immediately. History will judge every one of us in a position to end this nightmare. I ask like-minded colleagues to stay in DC and help do so,” Phillips said in a tweet Jan. 7.

Phillips said in a tweet while in the Capitol while the mob was breaching the building, “They’ve asked us to take cover on the House floor and get our gas masks ready. This is insane.”

The congressman was also heard yelling on the floor at Republicans as the lawmakers took shelter, “This is because of you!” Phillips confirmed this to MPR News.

Many Republican leaders have spoken out condemning the violence. Jennifer Carnahan, the Republican Party of Minnesota’s chairwoman, released a statement on Jan. 6, which reads, “The violence taking place at the United States Capitol is not American or representative of what we believe in, in our country. ... Peaceful protests are protected by our constitution, attacking police and breaking into the Capitol is not.”

U.S. Speaker of the House Nancy Pelosi said the House will call on Pence to use the 25th Amendment to pull Trump out of power. She added that if Pence refused, the House would move forward in pursuing impeachment. If that effort is successful, Trump would be the first president in history to be impeached twice.