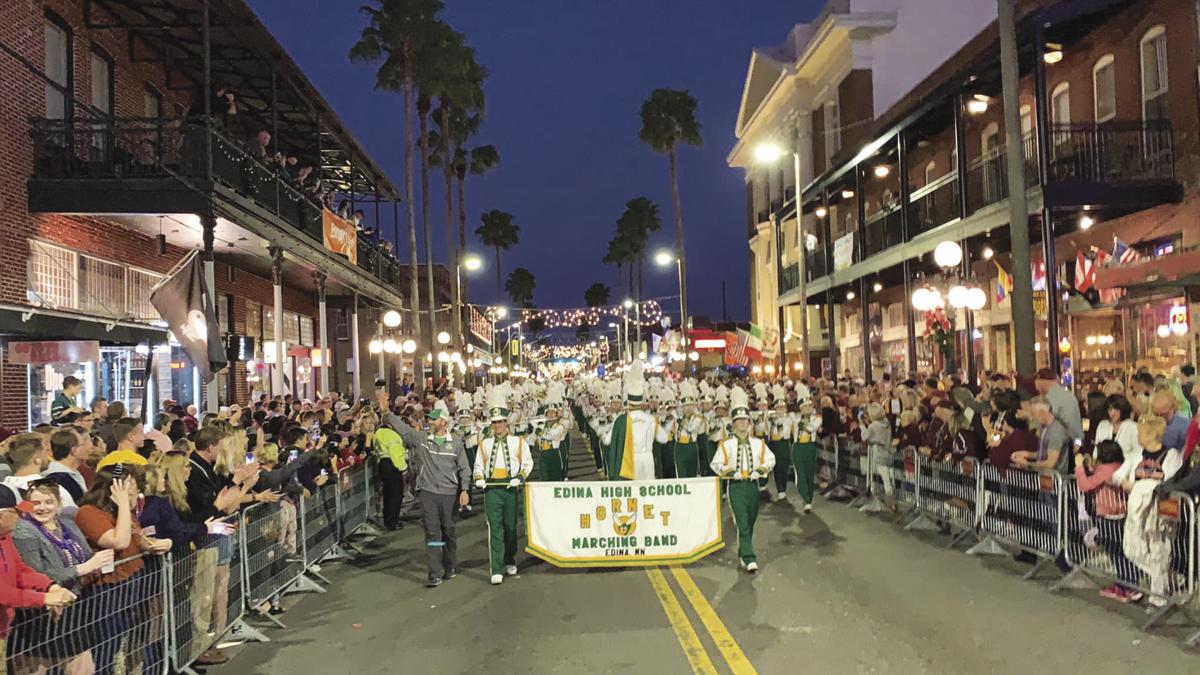 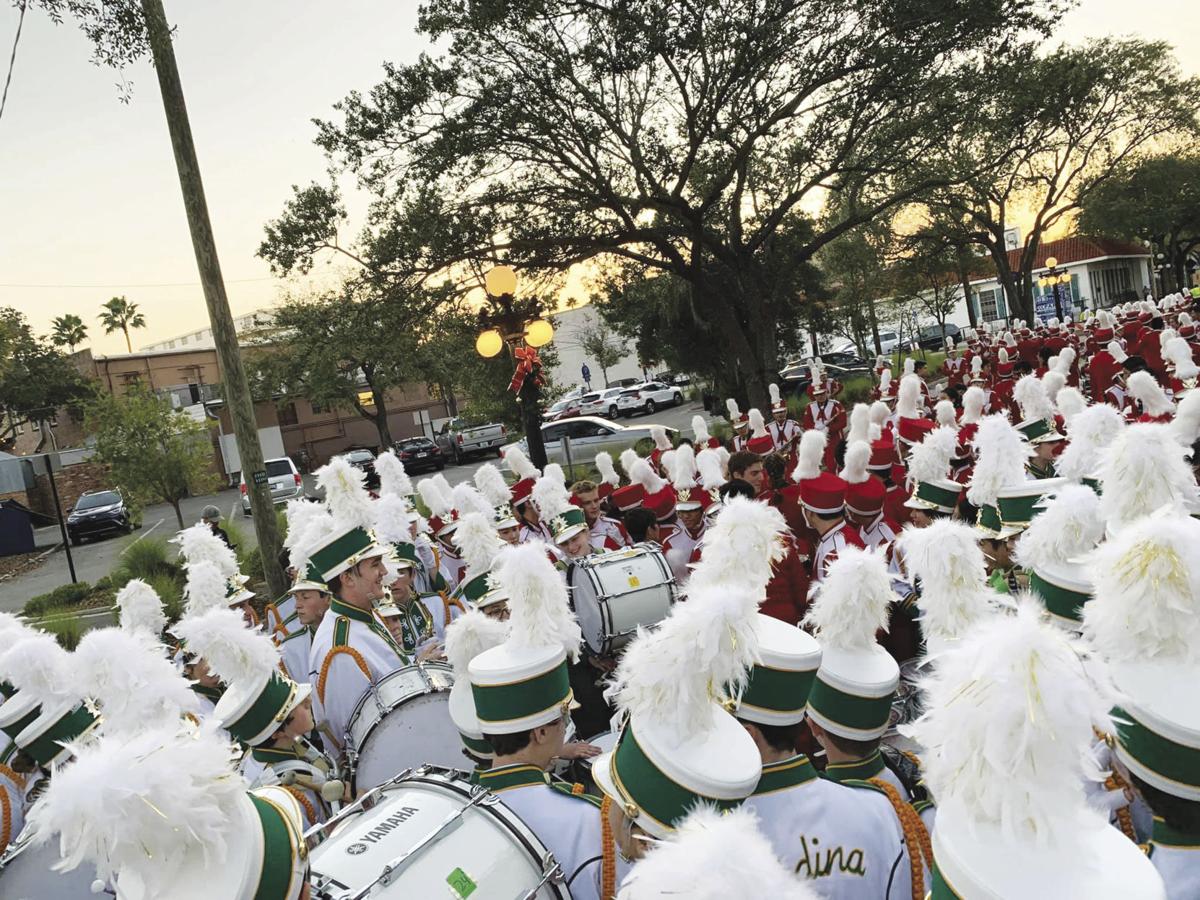 The Edina High School Marching Band mingles with musicians from other schools during its trip to Tampa Bay. The band was one of 12 marching bands to perform at halftime of the Outback Bowl Jan. 1. (Photo via Edina High School band Facebook) 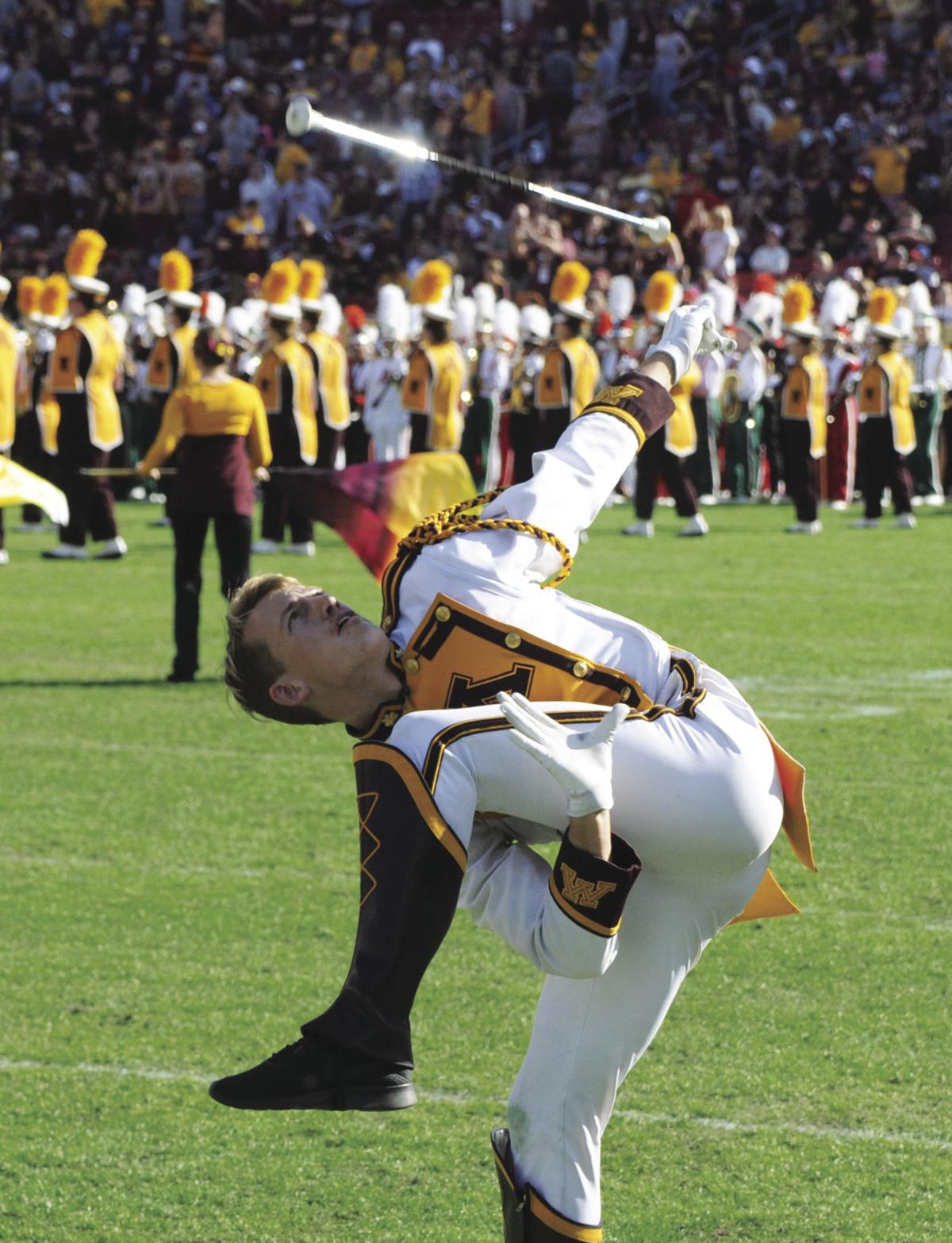 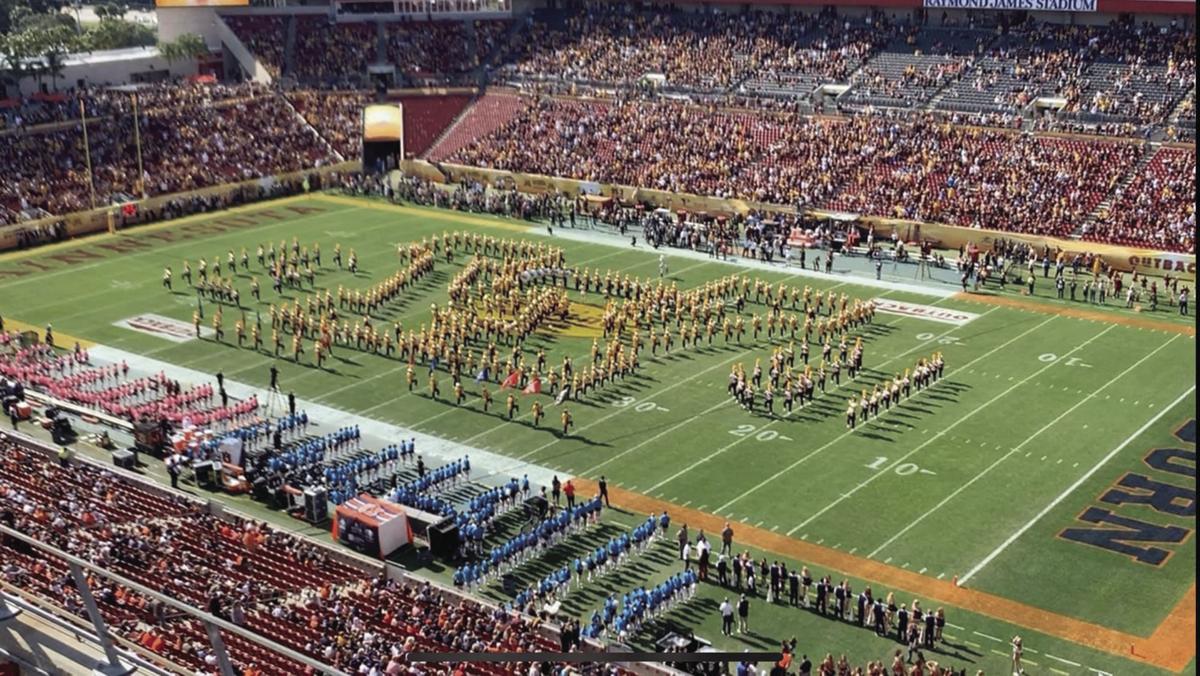 An inverted “M” for Minnesota is visible from the upper reaches of Raymond James Stadium in Tampa during halftime of the Outback Bowl Jan. 1. Due to luck in planning, the Edina High School Marching Band got to join the U of M band as the Gophers took on Auburn in the bowl game. (Photo via Edina High School Band Facebook)

Golden Gophers fans everywhere were disappointed when their dreams of a Rose Bowl appearance were dashed in November, but when it was announced the football team was headed to the Outback Bowl instead, Edina High School band members had reason to cheer.

For more than a year, the Edina Marching Band had been planning a trip to Tampa Bay, Florida, to perform in the Outback Bowl, no matter who was going to play. And now, marchers would get to perform in front of roaring fans from their home state.

During halftime of a game the Gophers would go on to win 31-24, 177 Edina students were among the 12 bands that took the field to play a series of medleys for the Raymond James Stadium crowd. And with the University of Minnesota Marching Band also in attendance, the game doubled as a reunion, with about a dozen Edina alumni now on the U of M Marching Band.

“I was thrilled that we got to play with the Gophers,” said senior Lindsey McKahnn, one of the Edina Marching Band’s four drum majors. McKahnn had to be careful, though, not to offend Gophers fans who had their sights set on bigger games than the Outback Bowl. “Some of my friends who are football fans got mad at me,” McKahnn admitted.

Edina Marching Band Director Andy Richter, an alum of both Edina High School and the U of M, called the circumstances “bittersweet.” He added, however, “I was super excited that they were at the game that we planned on being at from the beginning.”

The trip was announced last spring when no one was predicting a New Year’s Day bowl game for the Gophers. But as the season went on and the team kept winning, the fan base became overtaken with visions of their team playing in the Rose Bowl, “The Granddaddy of them All,” for the first time since 1962.

Losses to Wisconsin and Iowa derailed those aspirations, however, as the Gophers were ultimately assigned to the Outback Bowl, a lesser but still highly respected showcase.

Paul Krenik, another senior drum major, was among the Edina band members dealing with some conflicting emotions as it became clear that the Gophers’ failure to reach the Rose Bowl meant he would see them in Florida.

“I love the Gophers. My dad has held season tickets for over 10 years now. I’ve been going to games since they played in the Metrodome,” Krenik said.

But playing at a Gophers game went a long way toward making up for his dashed Rose bowl hopes.

“This was definitely one of the coolest moments of my life,” Krenik declared.

The Outback Bowl provided the rare opportunity for band members to perform with more than 1,000 other musicians, all on the field at once, a spectacle made more special by the fact this was the final time the Edina group would march together.

“It was probably the best experience I’ve ever had,” said senior Olivia Versluis, also a drum major. “Me and a couple others just walked off in tears. It was just amazing.”

Added McKahnn, “In terms of scale of performances, the Outback Bowl was kind of like nothing else we’ve ever done before.”

Band members were also blown away by the reception they received on the night before the game when they marched in the Outback Bowl New Year’s Eve Parade. Richter called it “probably the most exciting parade I’ve ever been involved in.”

Spectators lined the sidewalks six-deep for the nighttime procession. “And when they found out that we were from Edina, Minnesota, they went absolutely crazy. It almost felt like we were the Beatles,” Richter said, explaining the crowd was cheering so loud the musicians couldn’t hear themselves play, the same conundrum the melodic mop-tops famously faced with their frenzied fans.

The jam-packed sidewalks and adoring crowds made for a New Year’s Eve scene that was “just unbelievable,” senior drum major Tommy Hardie said.

“Everyone was just super into the bands,” he recalled. “The atmosphere was just amazing.”

It’s the kind of experience “that makes you feel like you’re part of something bigger,” said Chamberlain Gregg, an Edina alum who is also the drum major for the U of M Marching Band. The Edina marchers relished the chance to visit with fellow Hornets like Gregg.

“He let me try on his hat and carry his mace,” McKahnn said, referring to the scepter-like staff Gregg gets to carry.

As far as Gophers football goes, Gregg, a junior, appreciated the chance to march during a season full of buzz, a welcome development after the U of M’s football attendance had suffered the previous season.

“It was such a great conclusion to such an energetic year all around,” Gregg said.

He knows his senior year could bring even more excitement. “I think the Rose Bowl would be everyone’s dream, for sure,” he said.

Further evidence of rising ambitions among the maroon-and-gold faithful, Richter said his friends are urging him to apply for a chance to play in that game, too.

Sorry, there are no recent results for popular images.