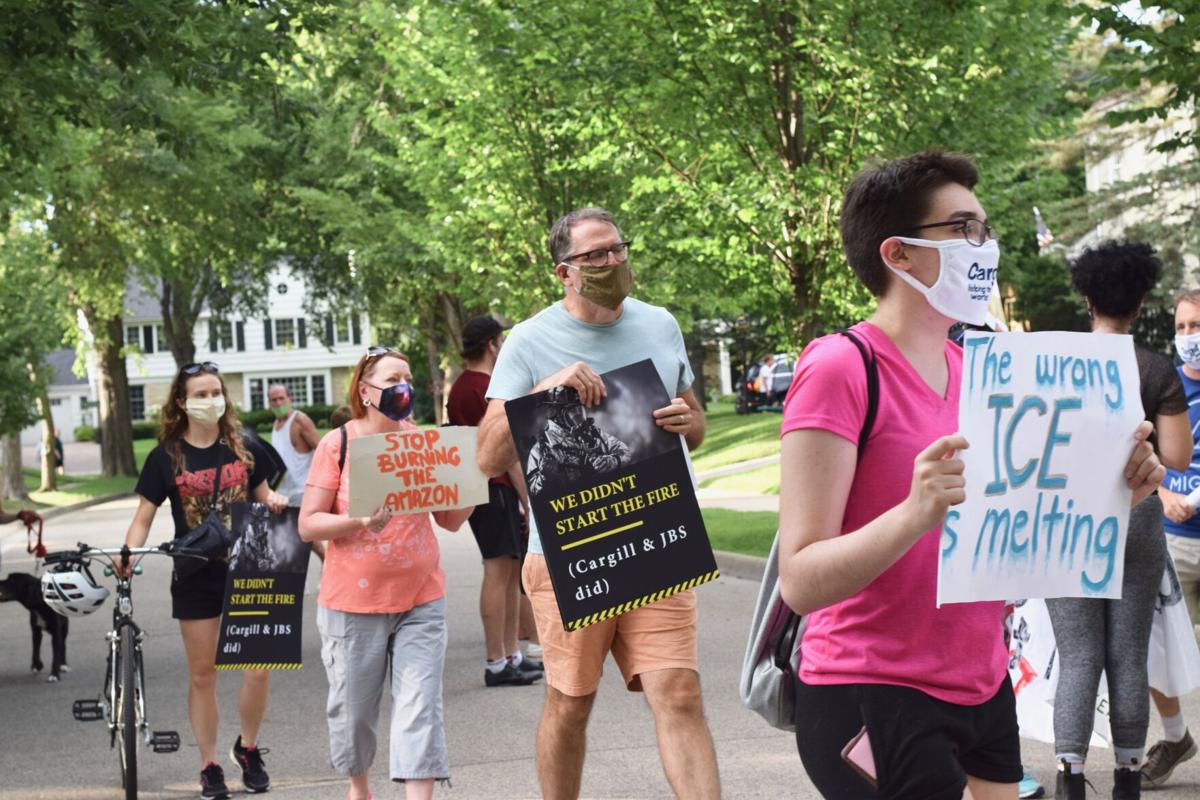 Demonstrators march July 29 at the home of Cargill CEO David MacLennan. Their protest emphasized forest fires in Brazil that are often set to clear land for agriculture. (Submitted photo by Linnea Henrickson) 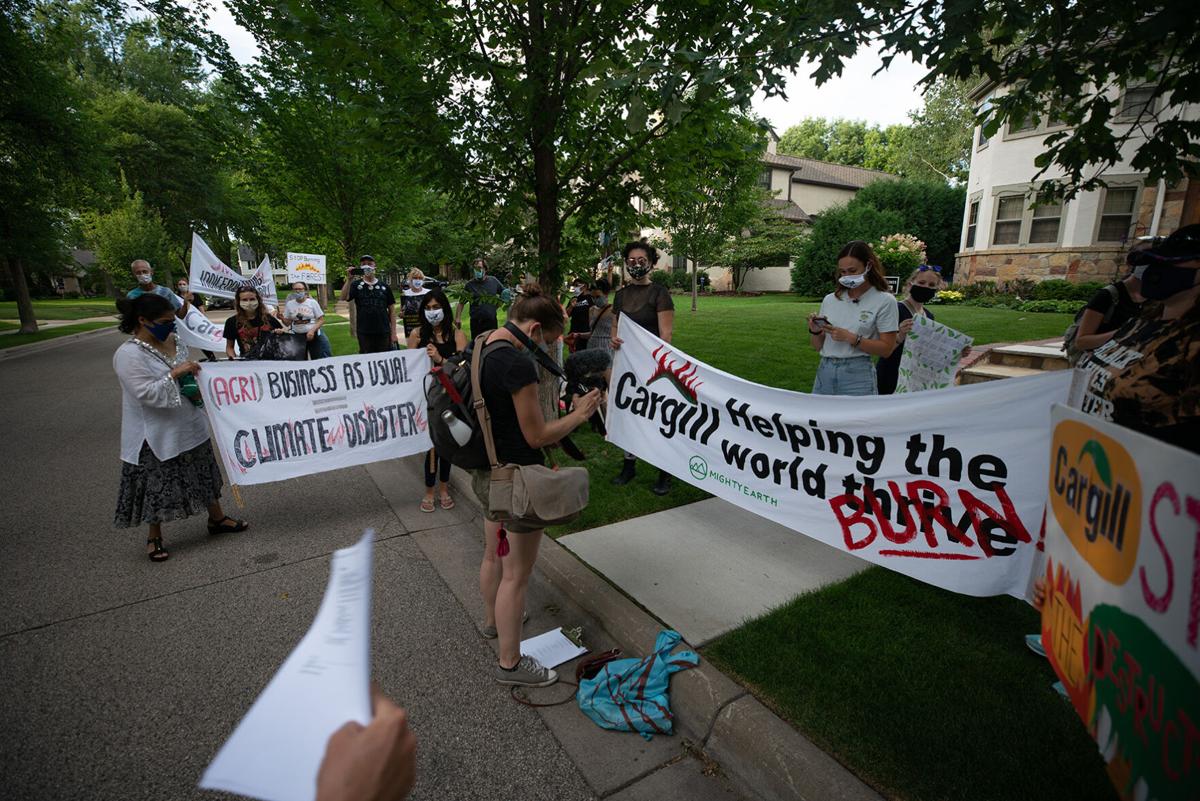 Demonstrators march July 29 at the home of Cargill CEO David MacLennan. Their protest emphasized forest fires in Brazil that are often set to clear land for agriculture. (Submitted photo by Linnea Henrickson)

Local environmentalists made their crusade personal last week when they marched into Edina’s Country Club Neighborhood.

A group of about 30 demonstrators gathered July 29 in front of the home of Cargill CEO David MacLennan to demand an end to deforestation in the Amazon rainforest. The protest, organized by the Washington, D.C.-based organization Mighty Earth, marked a continuation of the group’s focus on MacLennan, who heads up the largest private company in the United States.

According to Michael Greenberg, a senior associate at Mighty Earth, the organization has demonstrated at the majority of the MacLennan’s most recent speaking engagements, including appearances in Cedar Rapids, Iowa, Amherst College in Massachusetts and Interlachen Country Club in Edina. Last Halloween, another activist group, Northfield Against Line 3, also organized a protest in front of MacLennan’s home, Greenberg added.

Mighty Earth in 2019 branded Cargill, a global trader in agricultural commodities, “The Worst Company in the World.”

“We are here to demand that Cargill be held responsible for its devastating supply chain,” Abby Hornberger, a 20-year-old environmental sciences student at the University of Minnesota, said during a short speech in front of the MacLennan residence. It did not appear that anyone was home at the time of the demonstration, which lasted about a half hour.

Mighty Earth has also demonstrated at Cargill’s Plymouth headquarters and the Cargill Gallery at the Minneapolis Institute of Art, but taking the message to the prestigious neighborhood makes for a more pointed delivery.

“I think it makes it more personal to call out the actual CEOs themselves instead of the company in general,” said 21-year-old Meghan Flora, a University of Minnesota environmental geography student who also demonstrated.

In criticizing the demonstration, Cargill spokesperson April Nelson also contemplated the personal nature of the protest. Nelson notes that neighbors have faced undeserved disruption and that children were exposed to profanity last Halloween through some of the signs demonstrators carried that time.

The wider effect a protest can have on the neighborhood is a benefit of the direct approach, Flora said. “It’s almost a way to embarrass the CEO in front of his neighbors and community,” she observed. Nelson stated the MacLennan’s neighbors are concerned for their safety, but acknowledged the protests have been peaceful.

Through the Cargill spokesperson, MacLennan declined to comment. Nelson, however, in arguing that MacLennan and his wife are being treated unfairly, noted the couple’s involvement in local foundations that work on behalf of disadvantaged youth, and the $10 million the Cargill Foundation donates annually to Twin Cities organizations focused on nutrition, education and opportunity gaps among young people.

There is less argument, meanwhile, over the role the Amazon rainforest plays in the earth’s ecosystem and the nature of recent deforestation trends.

Concern over the Amazon has grown since the 2018 election of far-right Brazilian President Jair Bolsonaro, whose policies, activists point out, have allowed the accelerated deforestation of a natural resource that acts as a giant carbon sink by absorbing the products of greenhouse gases.

Cargill, however, was one of 38 companies to recently encourage Bolsonaro to take a more aggressive stance against deforestation, Nelson noted.

Much of the concern around deforestation involves the clearing of land for soy production. Cargill was the second-largest exporter of soy from Brazil in 2018, according to Trase.earth, a web-based platform that aggregates supply-chain data with a mission of curtailing deforestation.

Environmental groups such as Mighty Earth are calling on Cargill to follow through on a pledge it made in 2010 to eliminate deforestation from its supply chain by the end of 2020. The agricultural giant made the pledge as part of the Consumer Goods Forum, a group of CEOs from more than 400 of the world’s largest companies. Cargill officials acknowledged last year that the company won’t meet that goal.

In response to last week’s demonstration, Cargill issued a statement that read, in part:

“The protest deeply mischaracterizes Cargill’s commitment to deforestation and our efforts to protect the climate. Sustainability is not a ‘nice to have’ at Cargill but instead is woven into the fabric of our organization – in terms of our investment priorities, our organizational structure and resource allocation.”

Part of that work, the statement adds, was the establishment of a “sustainability hub” at the corporate level that addresses Cargill’s supply chain. Nelson noted that additionally, the company launched a $30 million fund this year to protect forests in Brazil, has trained 1.2 million farmers in sustainable agriculture practices, and committed in 2006 to a moratorium on buying soy from deforested land in the Amazon.

A recent report from Cargill states 96% of its soy supply chain is deforestation-free. Mighty Earth has criticized the methodology of the land survey cited in the report, saying it was based on single points on a map instead of including the full boundaries of properties.

The environmental organization also notes the mapping only accounts for direct suppliers. “Cargill cannot claim that any of their soy is deforestation-free until more improvements are made in their supply chain traceability, transparency and monitoring efforts,” Mighty Earth stated in a written response to the Cargill report.

Those left unsatisfied with corporate sustainability efforts view protesting is a way of taking action when their own consumer decisions aren’t enough.

“While I have the privilege to choose not to buy from Cargill’s clients such as Costco, many Americans can’t avoid Cargill’s products,” Hornberger said. “Our individual diet choices can only reduce our carbon contribution so much, compared to the deforestation impacts of the practices necessary to meet meat and soy and palm oil demands.”