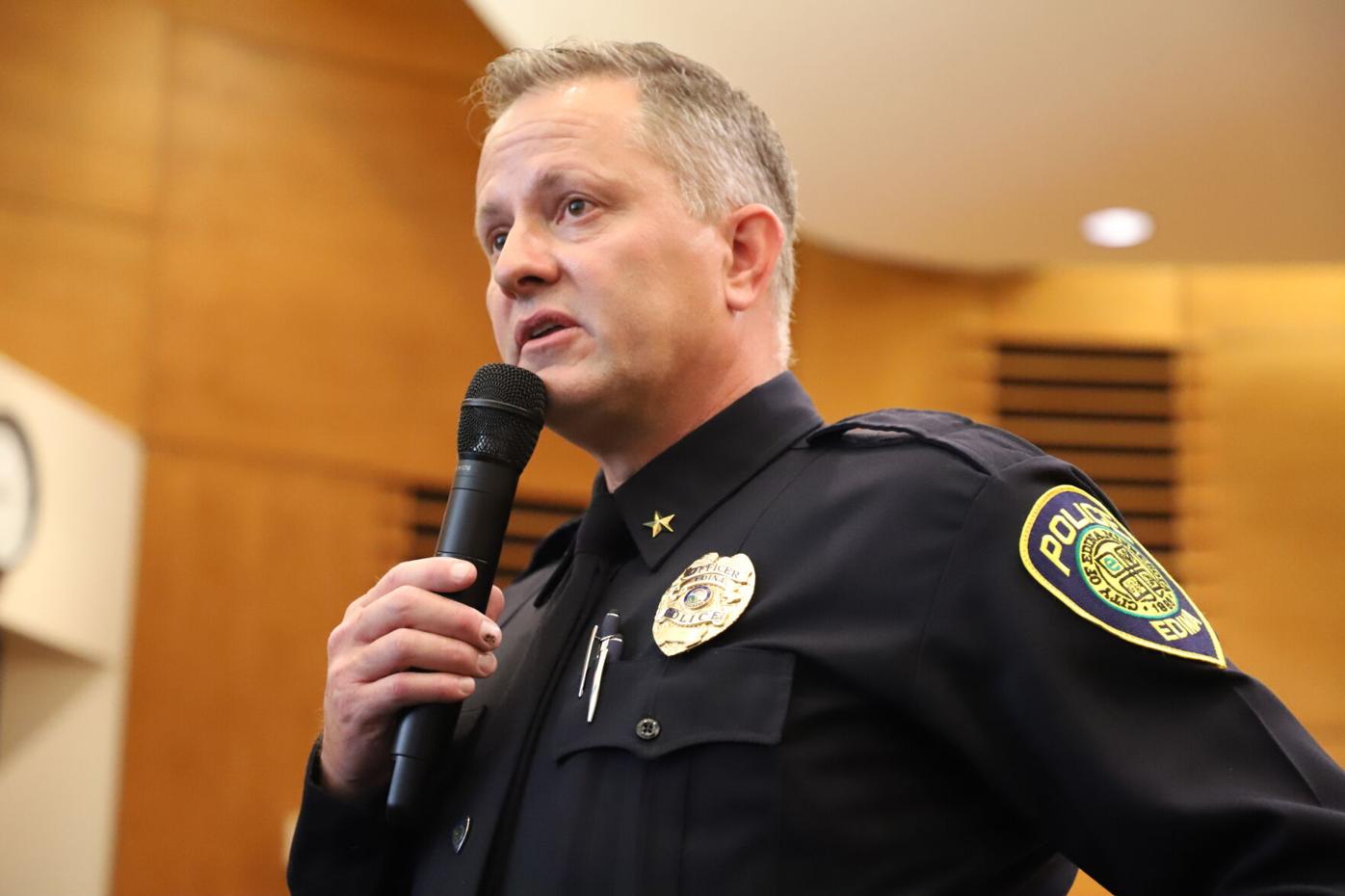 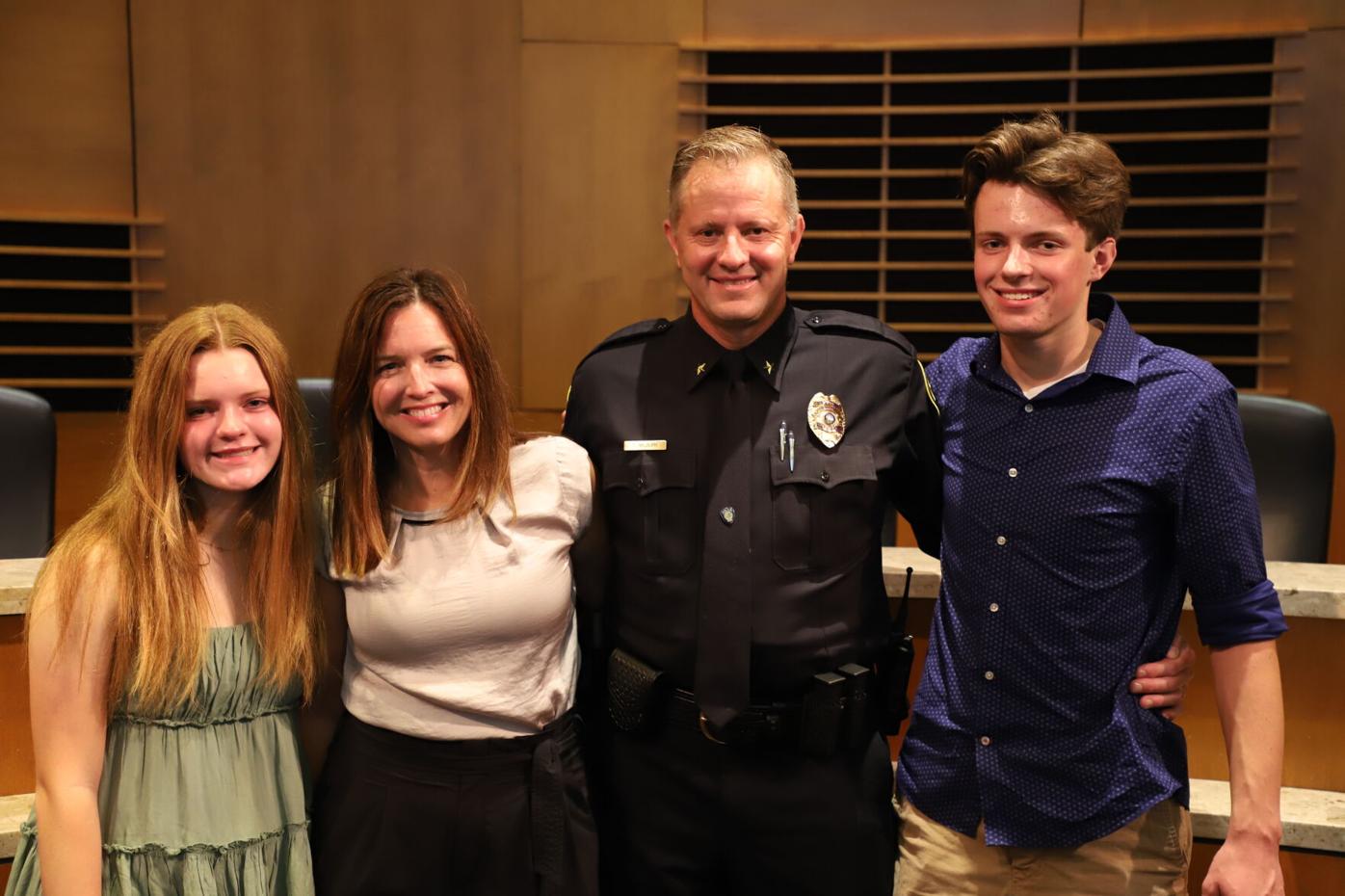 Todd Milburn poses for a photo with his wife Erin and kids, Jackson, 17, and Lauren, 15, at his swearing-in ceremony. (Photo courtesy city of Edina)

Todd Milburn poses for a photo with his wife Erin and kids, Jackson, 17, and Lauren, 15, at his swearing-in ceremony. (Photo courtesy city of Edina)

Todd Milburn has been able to jump into different positions throughout his career with ease – and his latest one as Edina’s new police chief seems to be no exception.

Milburn, who has already found himself in the spotlight just over a month into his time at the helm, has served in a variety of roles, all within the Brooklyn Park Police Department, over the past 30 years. Now, as Edina’s police chief, he believes he has the knowledge adapt to new situations – similar to a “utility baseball player, where I can fit into any position on the field,” he told the Sun Current.

“My ability ... to jump in and out of different situations and take on different challenges and be effective has definitely carried me well through my career and positioned me well for this new challenge,” Milburn said. “I’m super excited for the challenge here. I’m very happy to be here and I’m excited to serve the community.”

Milburn’s interest in law enforcement began while he was attending Como Park High School in St. Paul. A relative worked in the field and was able to set Milburn up on a ride-along. It ended up being a busy day, he said.

“I enjoyed it. I enjoyed the aspect of being out, out and about interacting with people,” he said. “After that experience, I was hooked.”

That’s when Milburn applied to be a community service officer in Brooklyn Park in 1992, helping out with animal and parking complaints and accidents. “That experience allowed me to interact with the community and kind of understand the workflow of what it’s like to be a police officer.”

The experience prompted Milburn to continue on to becoming a full police officer, a role he got in 1996. After that, Milburn had a myriad of different positions up until recently, including patrol officer, detective, drug task force undercover detective and SWAT officer.

In 2006, Milburn got promoted to sergeant, staying in the position for about three years until becoming a lieutenant – all still with the Brooklyn Park Police Department. In 2010, he was given the inspector-commander position while at the same time acting as a public information officer.

Before becoming Edina’s police chief on Aug. 16, Milburn was most recently in the role of deputy chief for Brooklyn Park, which he had held since 2014.

Milburn graduated from North Hennepin Community College for a law enforcement degree in 1995. He later went back for his four-year degree in organizational management leadership at Concordia University in 2010.

Recent events in the city have already put Milburn in the spotlight. He was introduced at a Sept. 11 memorial at Utley Park, where he said a few words to honor the first responders and victims of the attacks. He also helped lead the search for Ikhlas Abdullahi Ahmed, a 2-and-a-half-year-old girl who went missing and whose body was later found by law enforcement.

“It’s important for me ... to make sure that I’m front and center and communicating with people about what we’re trying to do and how we can help the community,” Milburn said.

There are several areas of the department that Milburn plans to focus his efforts on, including mental health response and continuing to engage with the community, he said.

“I always say when we’re not responding to 911 calls, what else are we doing in those downtimes?” Milburn said.

Mirroring the work of other police departments, Edina will look into creating a better model that supports people who are experiencing a mental health crisis while providing them access to services, Milburn said. This includes figuring out how the department can collaborate with mental health professionals and find appropriate resources when mental health calls are received, he added.

Some of the federal funds that are being given to the city through the American Rescue Plan Act are going toward a new mental health unit in the Edina Police Department. That money will go toward funding staff positions focused on mental health, to be later integrated into the department with the advice of mental health professionals from Hennepin County, Milburn noted.

Continued engagement with the community will also be a focus for the department, especially in the wake of the police killing of George Floyd in Minneapolis and Daunte Wright in Brooklyn Center.

“We know that that trust factor has eroded as of late for a number of agencies across the metro area,” Milburn said. “Our focus will be how to reconnect and make sure that we’re continuing to build that trust piece with our community moving forward.”

That includes “making sure that we’re interacting and building relationships with communities of color,” he added.

Milburn acknowledged national conversations about restructuring police departments and ways to police in nontraditional ways. In response, he noted that the Edina Police Department wants to be part of those conversations.

“We just want to be present at the table and continue those conversations and see what makes the most sense moving forward,” Milburn added.

Diversifying the Police Department will also be important, he noted.

Milburn said that being police chief means being empathetic, an active listener and transparent with the community. These are some of the qualities that he possessed in young adulthood and later came in handy as an officer, he said.

Having gone to a high school that included many people with different backgrounds, Milburn said he has used those experiences to carry him through his career in law enforcement.

“I can relate to so many different people, no matter where you come from,” he said. “If you can understand and also just have a mutual respect across the board, no matter what the situation ... a person might be in, that makes for good policing, that makes for a good cop.”

At the Aug. 17 Edina City Council meeting, Edina Mayor Jim Hovland welcomed Milburn to the city. “We’re so pleased to have you here,” he said.

Milburn said he’s looking forward to continuing his work in the department: “I’m excited to learn more about the community, to interact with community members, community leaders (and) to get to know the people that live in and visit the city of Edina.”