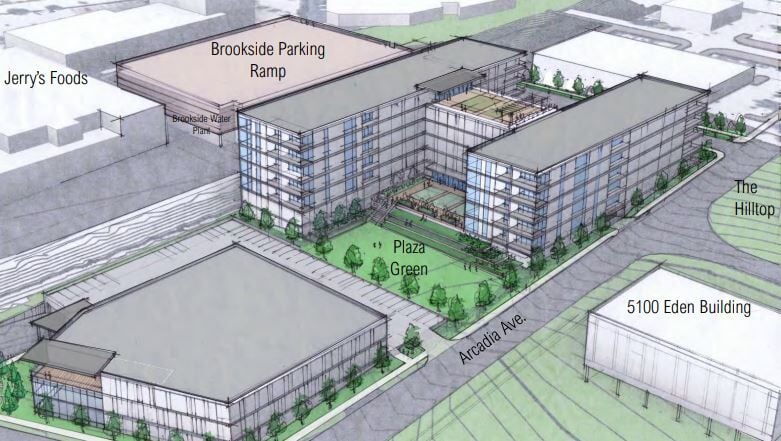 Frauenshuh Commercial Real Estate and United Properties are proposing to develop a long-vacant site in the Grandview area of Edina. The concept includes a senior cooperative, a medical office building and public plaza. (Photo courtesy city of Edina)

Frauenshuh Commercial Real Estate and United Properties are proposing a senior cooperative development, which is meant to cater to a group that may want more ownership opportunities in the city. (Photo courtesy city of Edina)

Edina’s Housing and Redevelopment Authority, which owns the site, indicated at a Dec. 17 meeting that the direction of the proposal by the development team, made up of Bloomington-based Frauenshuh Commercial Real Estate and Minneapolis-based United Properties, is worth pursuing instead of putting out a request for proposal for other developers.

The 3.3-acre site, located at 5146 Eden Avenue, sits between Avidor Edina, Jerry’s and Our Lady of Grace Church and has sat vacant since 2013. The development proposal includes plans for a senior cooperative with 90-110 units, a medical office building and green plaza.

“We’re really excited and think this project has a ton of momentum,” said Frauenshuh President Dean Williamson. “It’s going to be a great opportunity and project for the city of Edina if we can pull it all together.”

History of the site

Over several years, the site has seen several other development proposals by Frauenshuh, which entered into a collaborative development agreement with the city for this site in 2017.

With its most recent proposal in 2018, the company planned to use a model in which 60% of the land would be publicly owned and 40% privately owned. This proposal was not approved due to the HRA’s view that this model would be economically limiting.

HRA commissioners also stated a desire to wait until the city’s Housing Task Force could come up with recommendations on the needs of the city as a whole. According to the now-finished report, senior independent living units are a need.

Though the agreement between the city and Frauenshuh ended, the company continued to study the market in Grandview and the site, prompting them to propose the new concept.

There have been other potential uses identified for the site, too. It is being looked at by the city’s fire department as a possible location for a third fire station. And several developers have expressed interest in the site, according to city documents.

City Manager Scott Neal said that after receiving many inquiries, he and his staff wanted the HRA to determine whether the development team and concept plan of Frauenshuh and United Properties is worth pursuing instead of seeking out other development proposals. All HRA commissioners showed support for Frauenshuh’s concept.

Comments by the HRA

According to the meeting’s presentation, city staff said 2021 is when the city should begin actively pursuing a redevelopment plan for the site.

Commissioner Mike Fischer said there is an interest to the city to have these developers who have “incredible ties to our community.” Mayor Jim Hovland echoed this sentiment.

United Properties developed and still owns Centennial Lakes Park. The company has built 16 other senior cooperatives in the metro area, with one in Eden Prairie still under construction.

The senior cooperative provides several benefits and is well-suited for the area, the development team said. It provides relative affordability, a path for new families to move to Edina in homes that otherwise would have been occupied by seniors, and homeownership stability, the development team’s presentation stated.

Apart from plans for the buildings and plaza, the development concept includes a pedestrian bridge, a pedestrian-friendly road called a woonerf, infrastructure changes and new sustainable features.

“We think it’s a hidden gem that could be a great opportunity to bring something that really resonates with the city and the community at large,” Williamson said.

Commissioner Ron Anderson said age-restricted ownership options, like senior cooperatives, are currently underserved in Edina. “The developers have done their homework,” he said.

At the Dec. 17 HRA meeting, commissioners also discussed other public improvement projects in the Grandview area.

The HRA approved a plan for the city to work with the firms SEH, Barr Engineering and Kimley-Horn in order to prepare for $5 million in possible improvements in the area, funded by the Grandview 2 Tax Increment Financing District.

Work in and around the Grandview parking ramp, like lighting and wayfinding signage, would also take place.