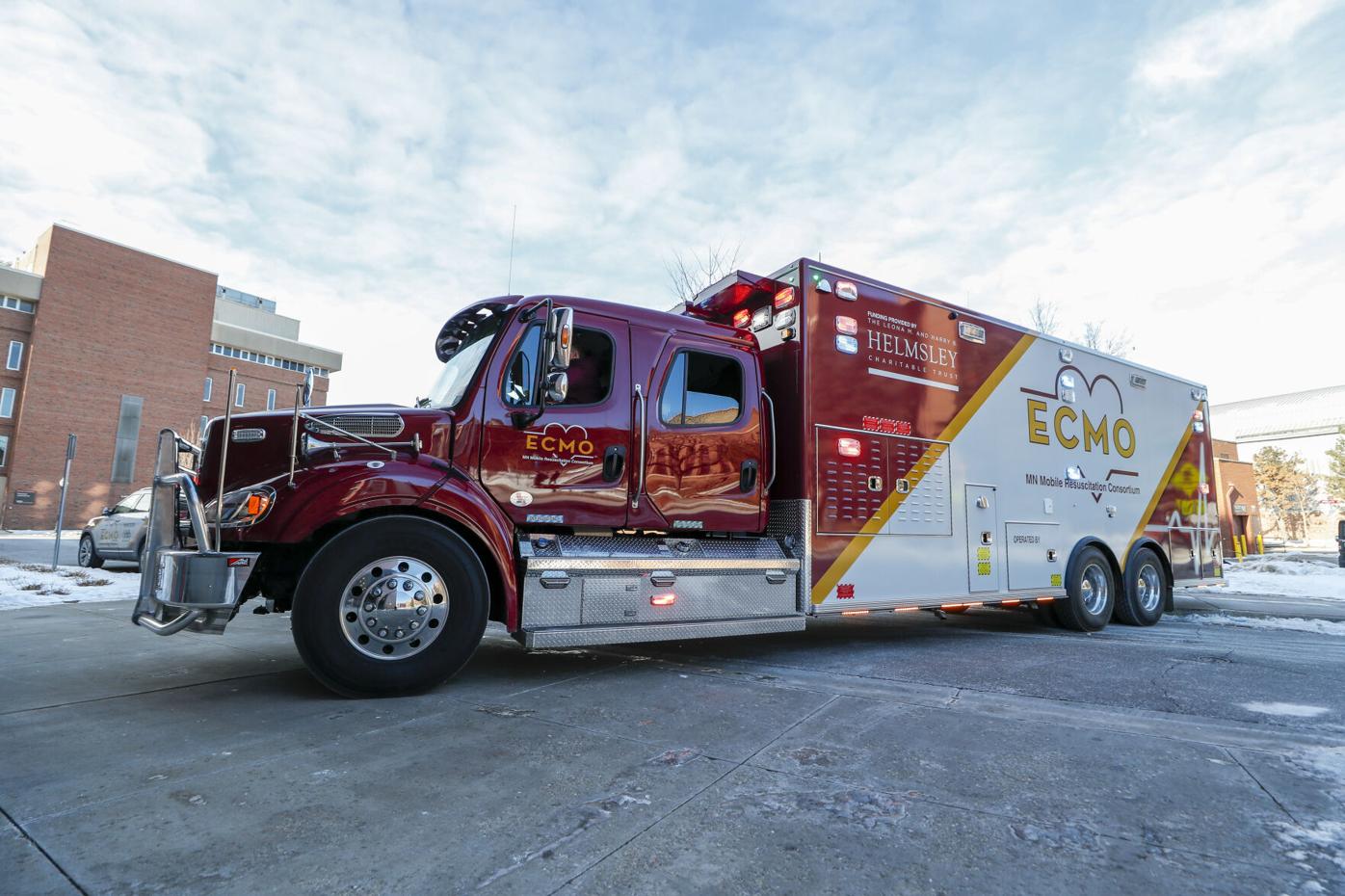 The fire-truck-sized ECMO truck will aid those in and around Edina that experience a sudden cardiac arrest. The truck will be at an Edina Fire Department by the end of the year. (Photo courtesy MMRC) 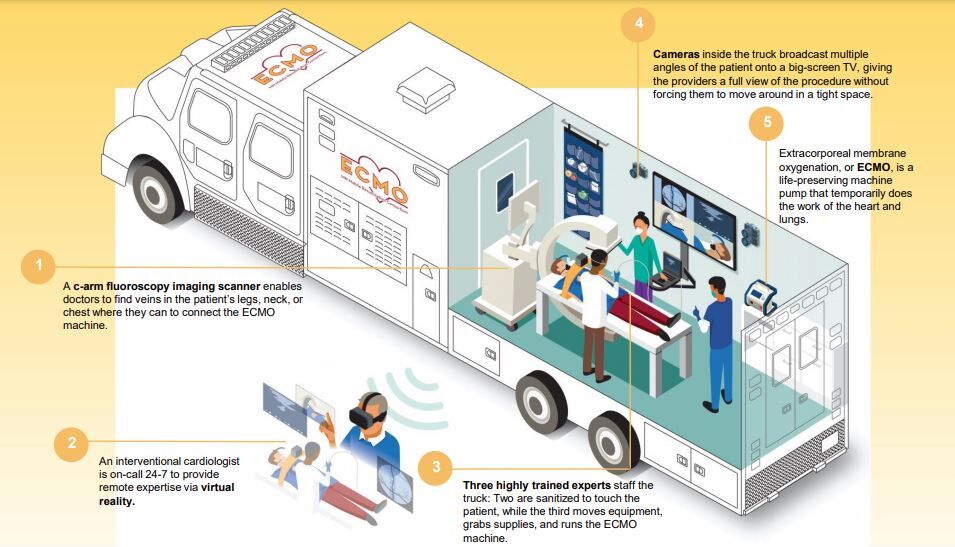 The new ECMO truck that will be stationed with the Edina Fire Department contains life-saving equipment for people experiencing a cardiac arrest. The ECMO machine mimics the work of the heart and lungs. (Photo courtesy MMRC)

The Edina Fire Department, in partnership with the University of Minnesota, will soon help operate a first-of-its-kind truck specializing in treating cardiac arrests.

The fire-truck-sized vehicle, which will use a heart-lung bypass machine to treat patients who are experiencing a sudden cardiac arrest, will be stored and staffed by the Edina Fire Department. At its meeting Aug. 4, the Edina City Council approved an agreement to partner with the university’s Center for Resuscitation Medicine, which officially launched the vehicle earlier this year.

“We’re able to take part in a program that’s advancing neurologically intact survival from a sudden cardiac arrest,” Edina EMS Chief Ryan Quinn told the Sun Current. “If we can be a part of latest and greatest evidence-based medicine, then it’s a unique place to be and great opportunity for us to play a role.”

The vehicle uses an extracorporeal membrane oxygenation machine, or ECMO machine, to create a heart-lung bypass, allowing doctors more time to figure out the cause of a patient’s sudden cardiac arrest. Cardiac arrest occurs when the heart stops beating. The out-of-hospital survival rate is about 10-12%, according to the American Heart Association.

In 2015, Demetri Yannopoulos, director of the Center of Resuscitation Medicine, helped start an ECMO program at the university. Then, in late 2019, the university, The Leona M. and Harry B. Helmsley Charitable Trust and several health care systems in the Twin Cities created the Minnesota Mobile Resuscitation Consortium to try to provide sufferers of cardiac arrest with quicker access to treatment. The Helmsley Charitable Trust awarded an $18.6 million grant to help launch the consortium.

The university announcement stated that for every10-minute delay in treatment for cardiac arrest, the chance of mortality increases by 15-25%.

With the establishment of this consortium, three SUVs began going to various emergency departments in the Twin Cities with a specialized ECMO team and ECMO equipment to intercept their ambulances to provide additional aid.

A University of Minnesota study, published by the EClinicalMedicine Journal in late 2020, found that the work by the Resuscitation Consortium saw a 100% success rate in cannulation for out-of-hospital sudden cardiac arrests. Cannulation is a method by which large tubes are inserted into the main arteries and veins of a patient.

It also found a 43% survival rate at hospital discharge and three months later. These are “remarkable” numbers, Quinn said at the Aug. 4 meeting.

The next phase of the consortium’s plan was to launch a mobile truck, larger than the SUVs, that would provide remote emergency help for a cardiac arrest, reducing the amount of time to treatment and expanding the scope of who can be treated, the university press release said.

Now, that new truck will be traveling Edina with the approval of a partnership between the city and the university.

“ECMO is a substantial change that is very new on the horizon,” said Kim Harkins, program manager for the Center for Resuscitation Medicine. “When I look at the impact to the community and to the public it’s that if our program can continue to find solutions on how to get patients to ECMO sooner when they have a cardiac arrest, the chances of survival in our community will go up significantly.”

She added, “It’s the way to move the needle.”

The new truck will include an ECMO machine pump that temporarily mimics the work of the heart and lungs, a c-arm fluoroscopy imaging scanner, which helps doctors find the veins in a patient to connect to the ECMO machine, interior cameras that will broadcast several angles of the patient onto a large television screen inside the truck and technology to allow a cardiologist to be on call at all times to provide assistance through virtual reality.

When there is an emergency called in to 911 within the city of Edina, emergency vehicles for the city will be dispatched. Once determined that it is a cardiac arrest situation that would require use of an ECMO machine, the ECMO truck will be dispatched by the program’s partner, LifeLink III. Specialists trained in ECMO will also be dispatched at the same time.

The three will converge at the same site, Harkins said. While the program is still in its early stages, the meet-up point will likely be the M Health Fairview Southdale Hospital or another healthcare facility, Harkins said.

When meeting the ECMO truck, Edina firefighter-paramedics will largely be responsible for setting up the truck and equipment, Quinn said. After a patient is placed on ECMO, they will be moved to the ambulance or the hospital for further care, Harkins noted.

If the incident happens outside the city within a certain number of miles, the ECMO truck can also be dispatched.

The truck will likely start being used by the end of this year. More details on how the new truck will operate are still being worked out, Harkins noted.

“Anything novel and new, there’s always a lot of possibilities. You just have to take slow steps to get to where it becomes an even greater asset to the community,” she said.