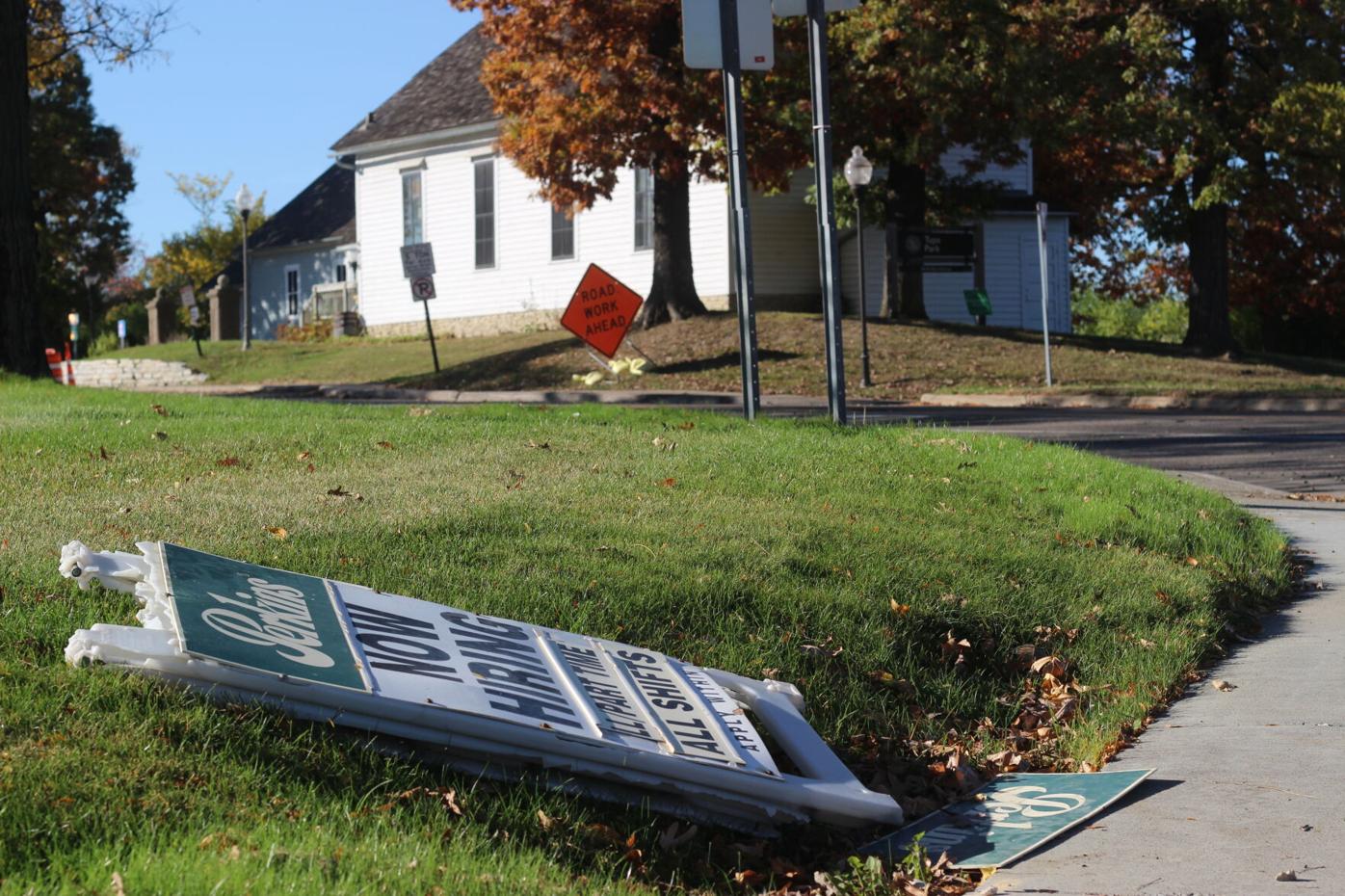 A Perkins restaurant sign sits on the sidewalk near Eden Avenue, where a tax increment financing district is proposed. (Sun Current staff photo by Caitlin Anderson) 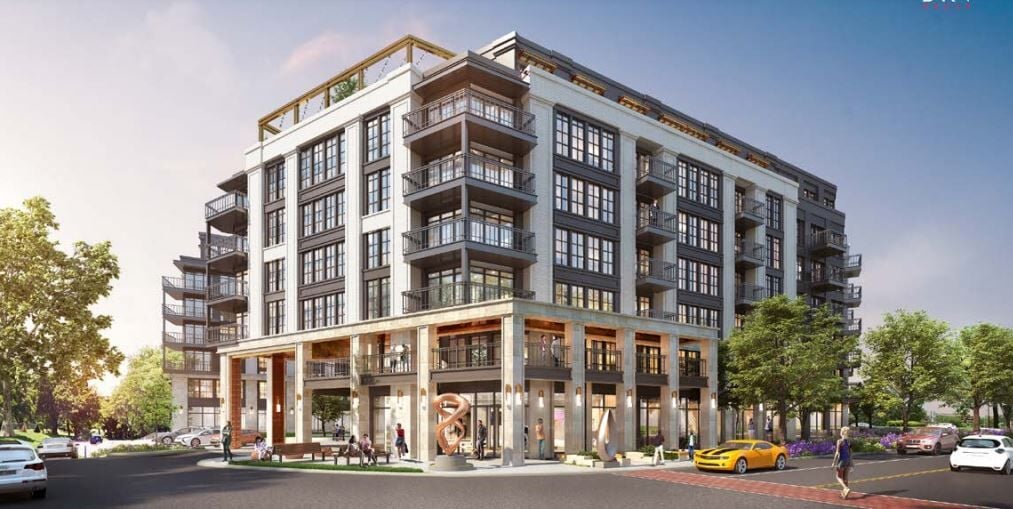 A seven-story mixed-use building is proposed at the Perkins restaurant near Edina City Hall. (Photo courtesy city of Edina)

The city of Edina is considering the establishment of a tax increment financing district to help fund a development project near Edina City Hall.

Early next month, the Edina City Council will decide on the establishment of the Eden/Willson TIF district, which would advance a seven-story project at the site of the Perkins across from City Hall. The TIF district would also be meant to spur public improvements, including work on roads and sidewalks in the area.

“We find that it cannot reasonably be expected that a proposed development of this scale and quality would happen with affordable housing and with the roadway improvements without the use of tax increment financing,” the city’s Economic Development Manager, Bill Neuendorf, told the council.

A preliminary rezoning and site plan for the development project at the Perkins, located at 4917 Eden Ave., was approved by the council in June.

The plan would tear down the 1970s-era restaurant to build a 208-unit apartment and restaurant with 277 underground parking stalls and 29 surface stalls for the restaurant. Ten percent of the units would be affordable for households earning 50% of the area median income for 21 years, Neuendorf told the Sun Current. The developer, St. Louis Park-based Reuter Walton, did not respond to a request for comment.

The new TIF district, which would last 25 years, would encompass the Perkins, two historic, city-owned buildings – Grange Hall and Cahill School – and the area’s roadway network. The relocation of the historic buildings is a potential part of the project and is included in the TIF district’s maximum budget, $22.7 million.

That number also represents the estimated incremental property tax accumulated as a result of the district.

During discussion of the development project, residents expressed concern about safety as a result of anticipated increased traffic in the area. The immediate area’s roadway network currently has uncompleted sidewalks, limited bike routes and high traffic volume during peak hours, according to city documents.

The new TIF district is intended to help make these improvements, Neuendorf said.

“What we hope to do is really transform the area and make it more attractive, more welcoming, and safer and convenient for bicyclists, pedestrians and drivers,” he told the Housing and Redevelopment Authority, which voted to establish the district Oct. 14.

What is TIF and how is it used in Edina?

Generally, when a TIF district is established, the current amount in property tax collections within the district continues to go toward the city, schools and county. But the property taxes that would have been added with new development and improvements go to a TIF fund, which pays for part of the district’s development and public improvement costs.

Edina officials use a pay-as-you-go system for giving TIF funds to developers – a process that is meant to reduce the risk for the city. The developer must finish the development in order to begin accessing funds from the TIF in the form of a TIF note.

Assuming success, the city would likely begin payments in 2025, which would last up to 15 years or until the TIF note is paid off, Neuendorf said.

The city has used TIF in the past to fund projects. Most recently, the Edina City Council approved a TIF district for a project, 4040 West 70th Street, in August, which seeks to build more than 100 units of age-restricted affordable housing. In 2021, about 5% of the tax capacity in Edina was contained in a TIF district. Starting in 2022, that percentage will drop to about 1% as the Southdale 2 TIF expires at the end of this year.

Without TIF occurring in this district, the market value of the site would not increase, according to a report by Ehlers Associates, the city’s public finance advisor.

The roadway improvements cited as the public benefit from the TIF district would be funded once the new development is further along in the process. The planning process for what those improvements would look like would also begin at that time, estimated to arrive one to two years from now.

While in a conceptual stage now, some possibilities for the changes are wider pedestrian boulevards and narrower streets along 50th Street, two roundabouts along Eden Avenue and left-turn lanes off 50th Street, heading onto Eden Avenue.

The Planning Commission voiced support on Oct. 13 for the establishment of the district, finding it in compliance with the 2018 update to the Comprehensive Plan. City staff also met with the Heritage Preservation Commission, Parks & Recreation Commission and Edina Historical Society, city documents said.

Some Edina residents have expressed concern about the district – both during a public hearing and to the Sun Current. Criticisms about establishing a TIF district at this site have included that the development is too large for the site, that Edina schools would not see funds from the increased property taxes during the life of the district and that the roadway changes would not be created or finalized until after or near the development’s completion.

“When awarding TIF, the bar should be high,” Edina resident and former Planning Commissioner Julie Risser said during the Oct. 19 public hearing, noting that it is out-of-scale for the area.

“There isn’t infrastructure … to support this scale,” Kirk Aadalen, a resident of the nearby Sunnyslope neighborhood, told the Sun Current, referencing the use of TIF without a comprehensive plan on the roadway network.

Aadalen also took issue with the notion of a TIF district at this site, stating correctly that Edina Schools would not get more than base-level funding as a result of increased property taxes until the end of the district. “If the TIF district goes through, Edina Schools is going to be missing out on a tremendous amount of (tax) revenue,” he said.

A mechanism inherent in a TIF district is that it freezes the property tax collections the city, county and schools each get at their current levels once the district is established.

Neuendorf told the council that at the TIF district’s end, each of the taxing authorities would see a drastic increase in funding share as a result of the new property tax collections.

Hope Melton, an Edina affordable housing advocate, expressed support for the district and development at the public hearing. “We need the traffic and public land improvements this project provides. We very badly need its affordable housing integrated into this market-rate building,” she said. “Let’s give it the TIF funding it needs to get over the finish line.”

“It makes sense for us to try to further the benefit for the community. And if we can tie that to development, I think that’s a wise approach,” Pierce said at the City Council meeting.

The establishment of the TIF district is the first step in the process to be decided Nov. 3, Neuendorf told the council. A contract with the developer in the form of a TIF agreement will be considered by the HRA Oct. 28 and by the City Council Nov. 3.

The development would likely break ground in 2022 with move-in of residents starting in 2024, Neuendorf said.